A Parade Is Not a Protest

Lessons for the looming collapse of our rights

A few years ago, I was involved in a mass mobilization against the detention of refugees coming across the southern border and their incarceration in detention camps. It was a very quick run-up to that event, and looking back, there’s a lot of things I would do differently.

In the end, though, it was about as much of an attention grabber to an issue as one might get: 800+ cities, hundreds of thousands of people across the US and around the world in the streets, leading Rachel Maddow’s show the night before, and with Hillary Clinton and other luminaries speaking at the event closest to them.

It accomplished exactly nothing.

Now, I don’t want to diminish the heart that was in those streets. But I do want to point out one thing.

What we have come to know as “protests” in this era are actually parades.

As anyone who has organized a protest in recent times can attest, “protests” in the streets of any location in America generally require a pre-obtained “parade permit.” Add some signs and some chants and some inspirational speeches, and you are engaged in a parade, not a protest.

And it should go without saying that state-sanctioned and permitted events are not protests. Any event that has the state’s imprint of permission is not going to make any impact.

For all its initial excitement, even the Women’s March did not accomplish any change at all in the lives of women in America. FOUR MILLION of us took to the streets for the first one in 2017, and it accomplished, again— and I am sorry to say it— exactly nothing.

Just look at where we are, right now.

Here we sit, just days after the leaked draft opinion from the Supreme Court that will eliminate abortion in 26 states the instant it is formally released, and will overturn Roe v. Wade, which has been established precedent in the United States for fifty years.

It will be the first time in American history that a Constitutional right has been withdrawn, and with it will come the jeopardy for every other right not explicitly written into the constitution: gay marriage, LGBTQ+ rights, birth control, interracial marriage, integrated education, and on and on and on it goes.

So what are we to do?

I have an answer: stop engaging in parades, and start disrupting the operation of power.

On February 1, 1960, four Black students sat down at a counter at Woolworth’s in Greensboro, North Carolina and tried to order lunch. Because they were Black, they were refused service and asked to leave. They did not, but stayed until closing time, the white staff refusing them service the entire time. 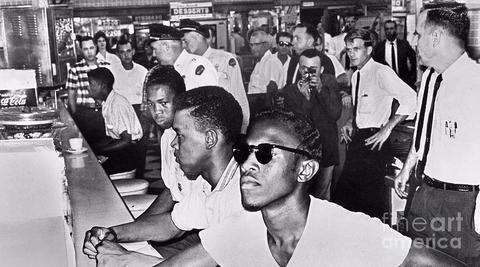 The next day, those four students returned with 25 more. And so began a movement.

Within days, 300 Black students and a few white allies were taking turns occupying all sixty-five seats at the lunch counter as a protest against segregation.

Over the next few years, the protests became a nationwide movement.

What those who engaged in them endured in response was awful, but they would not be moved. 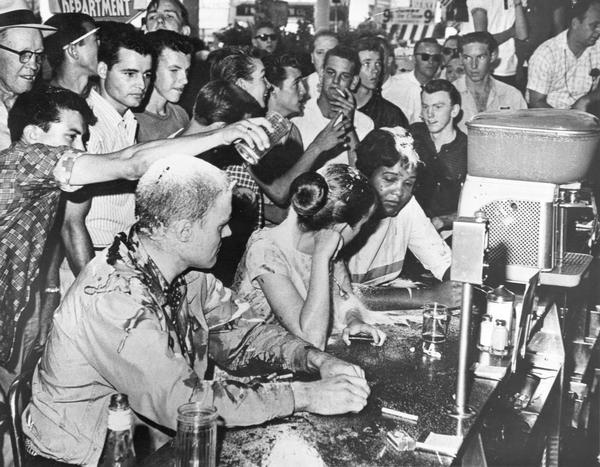 In one such protest in 1963, reporters described the following:

Police officers watched the events unfold but did nothing.

In a quick burst, someone pulled Memphis Norman off his stool and threw him to the ground.

“These white thugs began kicking him in the face right there on the floor,” Minor recalls.

Blood fell from Norman’s mouth. The other students remained seated.

“The police officers were inside of the store watching the whole thing, just a few feet away while these thugs were kicking this young black guy,” Minor says. “Kicking him in the face, and they did nothing to restrain them. They let it go on for a good while. Finally, they broke it up.” The police officers arrested Norman and someone who attacked him.

Anne was pulled from her seat, as was Pearlena, but they were not struck, and they fought their way back to the counter. By this time, Lois Chaffee, a white faculty member at Tougaloo, and Joan Trumpauer took seats at the counter.

John Salter was struck down by a punch, leaving Anne, Pearlena, Joan and Lois–two blacks, two whites–at the counter. Their bodies were smeared with dried ketchup, mustard, sugar, anything that was on the counter. They sat and faced the front.

Over that time, a negotiation between the students and Woolworth’s led store management to shut down lunch counters rather than serve Black people. But the losses from nationwide protests were too much for Woolworth’s to handle, and before long, Woolworth’s opened its lunch counters to any paying customers.

You will note that there was not a parade permit in sight.

The lunch counter protests are now marked as one of the foundational events of the Civil Rights Movement in America.

In June 2017, the Republican members of the then-GOP led Senate, helmed by Mitch McConnell, held a series of secret meetings on how they were going to decimate the healthcare safety net in America by capping Medicaid, and thereby render millions of disabled Americans uninsured, through a bill named the American Health Care Act of 2017.

On June 22, 2017, McConnell announced the outcome of these meetings, sparking absolute uproar in the disabled community.

More than 60 protestors in wheelchairs arrived at McConnell’s office and refused to leave. Eventually, Capitol police arrested 43 of them, including by forcibly removing protestors from their wheelchairs and putting paralyzed protesters in handcuffs. 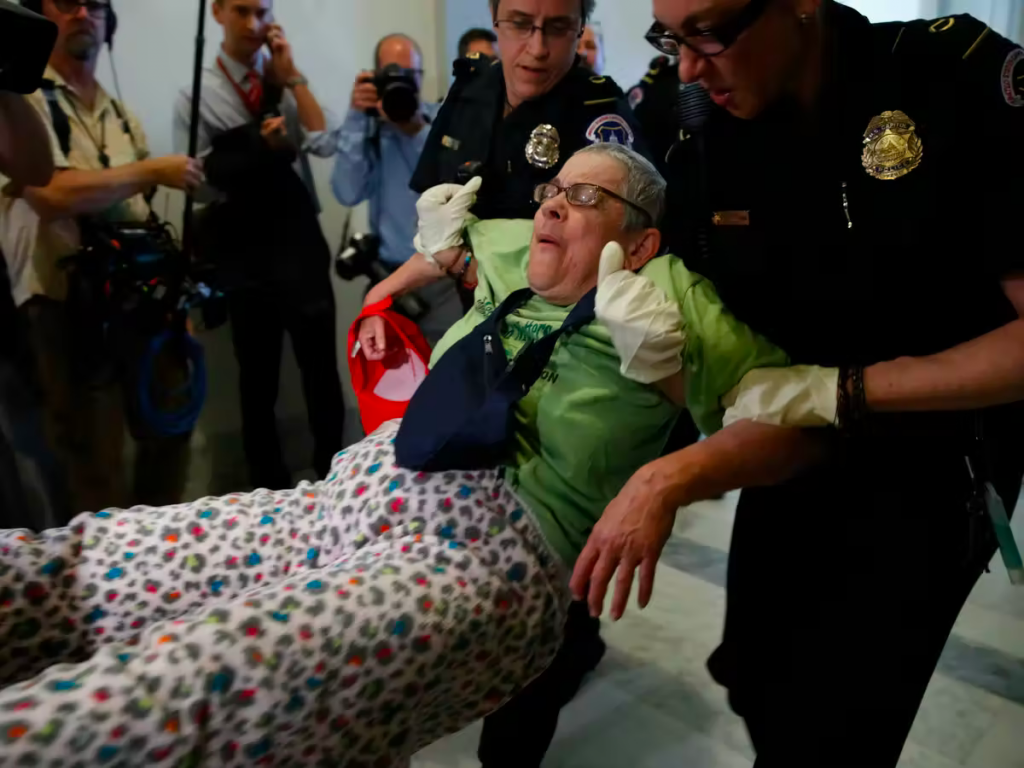 On July 28, 2017, every legislative effort to pass the American Health Care Act failed in the Senate.

Change does not come with state permission.

I want to contrast these events with a single photo.

That photo is this. 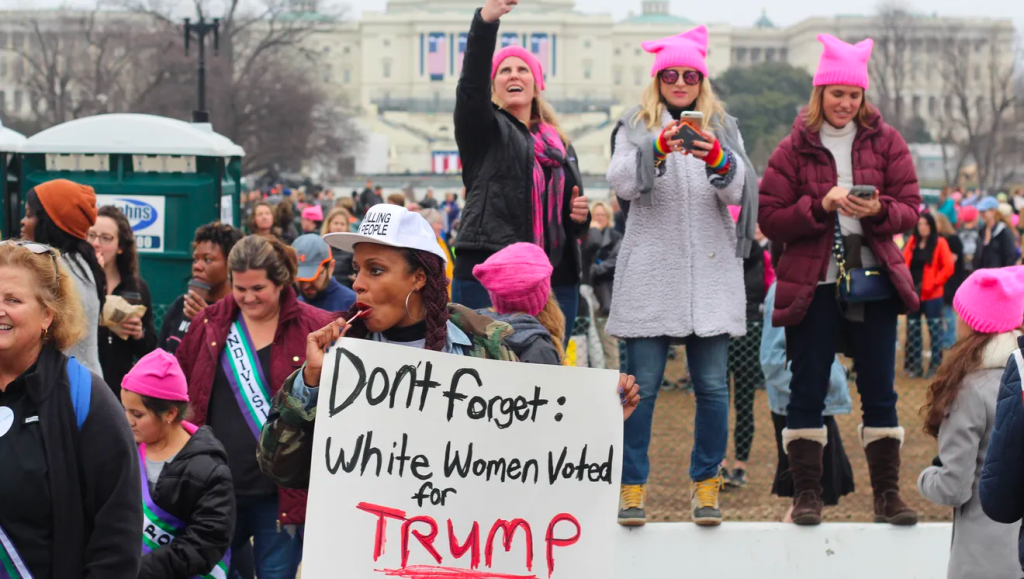 Pink pussy hats– let alone when every pussy isn’t pink and when not all women have pussies– are not a form of protest. Millions of women in the streets of the nation’s capitol with enough time to take selfies and tweet is not a protest.

Now is a good moment to ask yourself: what you are willing to do to save lives? Because that is what’s at stake.

Are you willing to engage in real protests that don’t come with a parade permit?

Are you willing to engage in real civil disobedience that disrupts the function of institutions that are trying to kill you or people you love, and decimate their freedom?

Are you willing to get arrested?

Are you willing to put your own body on the line for the sake of yours and other people’s bodily dominion?

Are you willing to do that even for people who don’t look or love or have the same body parts that you have?

Because I’ve got news for you, and particularly for white women who continue to think that a state-sanctioned parade makes a difference, and do not recognize that those in power DON’T CARE whether you march and chant and carry a sign, so long as it does not affect them: you will have to put your body on the line in real, disruptive protest that interferes with the operation of power if you expect anything to improve in this country.

It may cost you injury. It may bring down the power of the state on your body through violence. Indeed, for some of us in Los Angeles protesting for abortion rights on Tuesday night, it already has. 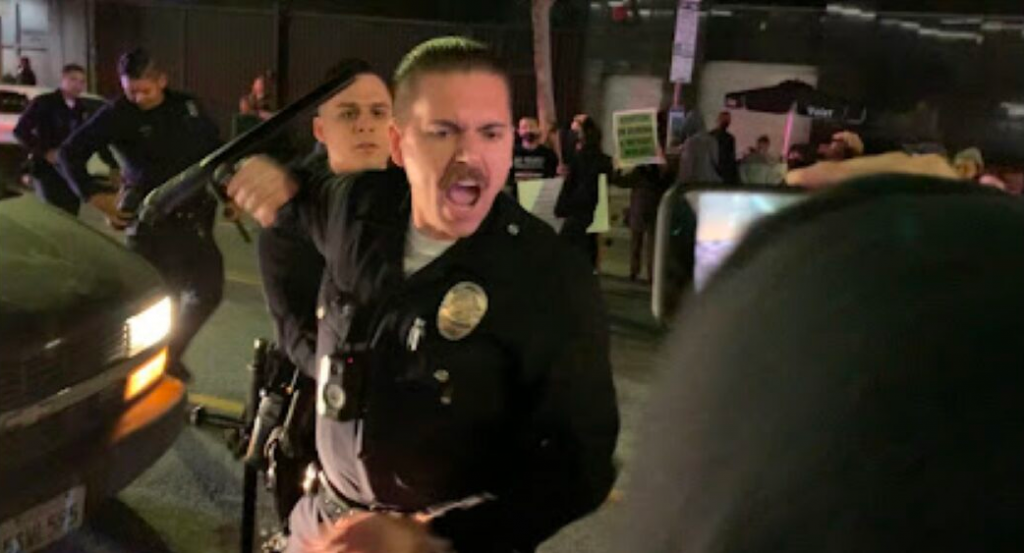 This is the long trajectory of change in America: the state will carry out its enforcement of power on your body, one way or another.

You will have to put your body on the line in real ways if you expect to change it.

You will have to do it for yourself and for everyone you love and for strangers, because when they come for one of us, they are already coming for all.

Today is a good day to decide: what are you willing to do in the face of unjust laws that will decimate human rights, eliminate our dominion over our own bodies and the bodies of anyone who isn’t white, rich, cis, able-bodied, born in America and male?

Showing up with signs and chants outside a building will not stop the fascist tide.

What are you willing to sacrifice to gain power over yourself, and to wrest power away from the hands of those who will take your life to keep that power?

Because in case it isn’t completely obvious: the time for that sacrifice has arrived.

Elizabeth Cronise McLaughlin
Elizabeth Cronise McLaughlin is the CEO of Gaia Project Consulting, LLC, a worldwide executive coaching and consulting firm, as well as the founder of The Gaia Project for Women’s Leadership. She has been featured in major media such as CNN, Forbes.com, The Huffington Post, and The New York Times. She has taught courses to thousands of executives worldwide, including at Columbia Law School and on behalf of Emerging Women Live. She speaks routinely in corporate and non-profit environments. Becoming Heroines is her first book.