Self-Delusion Is Cruelest of All: The Collapse of Afghanistan and American Illusions

Yesterday I found myself dry-heaving and hyper-ventilating in broad daylight, crouched behind the corner of an unused outdoor patio bar in Kansas. I hadn’t had but two beers, but I’d had more than enough of American obtuseness. On a smoke break from wielding my geek-stick (highlighter) with a fatalist fury—brushing-up for today’s Afghanistan column—I made the admittedly willful mistake of trying to explain why the Taliban capture of Kabul was affecting my mood. “I mean, it’s just, like, what was it all for—how do I and my generation of combat vets process the whole thing?” I heard myself saying, adding that “the lingering question of what it was all for, and knowing the dissatisfying answer, just has this bewildering effect of …” Then, in an instant, I snapped out of it, realizing I wasn’t being listened to at all, and being spoken over, or across—yakking something about the stylistic merits of a Pearl Jam song playing faintly in the background.

Look, I know the guy—like him, even. And while I get it, on some level, and had promised myself not to make the evening or next couple of days surrounding the tragedy unfolding in Afghanistan about me just because I happened to serve there, well—I was livid. Nonetheless, sticking to my privately promised guns, I stuffed down the angry thoughts—“Are you freaking kidding me? The Saigon of our generation just fell, along with American ambitions! And why the hell is everyone inside carrying on as usual—not discussing the events and implications, whilst using their magic-phones not to follow the flow of events, but to vacuously Snapchat carefully-posed selfies with snappy messages in mundanity?” Yeah, my racing thoughts—chasing a suddenly racing heart—slipped that deep into self-righteousness.

Still, they were only thoughts. I kept my mouth shut, waited out the suddenly slow-motion burn of his cigarette despite feeling increasingly light-headed with an acutely aching stomach. Through the glass doors he passed, and about-I-turned, collapsing into a catcher’s pose as I painfully coughed up nothing more substantive than my own silliness and self-regard. Even so, it is uncomfortable indeed to feel utterly out-of-control of one’s own body—and for some 30 seconds I was certainly experiencing that. My bestie—though not himself a veteran—had clearly completed laboring over whether to respectfully leave me be or kindly offer comfort, because over-my-shoulder I noticed he was bee-lining my way. A rare classy move, that. But by then I was just coming out of it—and feeling the usual guilt about daring-to-share, taking on the pain and sorrow of my killed or maimed soldiers and their loved ones as my own, plus having the temerity to be such an oversensitive and foolish sort.

The fall of Kabul also exposes exactly who and what America really is in the world, and who and what it is not.
It all happened in a flash, I suspect—but the reflexiveness of the temporary emotional collapse was off-putting still. In times past, that would’ve been the trigger to spiral straight to self-pity, petulance, and ultimately self-loathing. A bad start to a worse night—or week. I don’t exactly know why it wasn’t. It probably helped that there was someone I wanted and had plans to see—a surprising sense of excitement and genuineness that can bring real solace in the right circumstances. Not a distraction, but a reminder that there’s more to this life than melancholy and self-centered dramatics. Yet, there was also this—albeit slightly guilty—sense of closure and vague vindication. That is, assuming the U.S. war in Afghanistan really ends—and knowing full-well the continued cost to Afghans of our even attempting it. Complicated stuff, conscience and the human condition.

The thing is I’ve long been sick of—and have tried to avoid—commenting on America’s absurd Afghan adventure. After all, over the last few years, I’ve published no less than two dozen pieces on the rank risibility of the whole fiasco, plus the sadness and shame of my own complicity in the disingenuous deed. None of it much helped, at least not at the policymaker level—not that I’d held out much hope for that from the outset. Nevertheless, torn as ever between a sense of obligation to call bull on bullshit enterprises, and topical- or futility-exhaustion, the sheer scale of Afghan madness has repeatedly pulled me back into the commentary game. 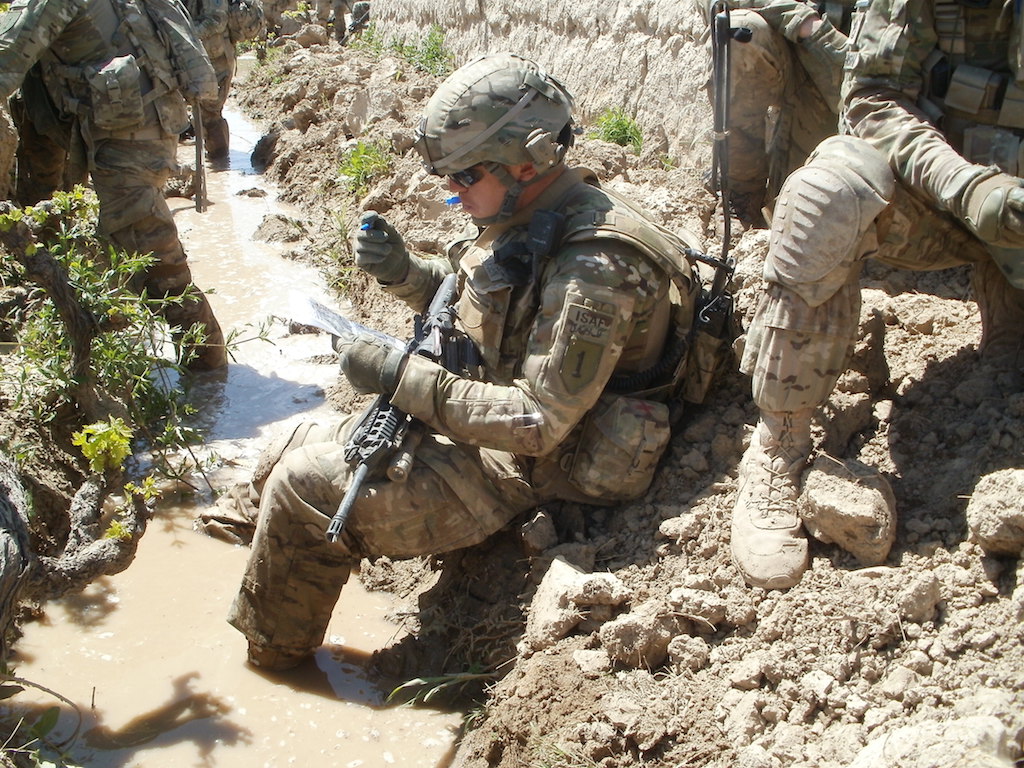 Capt. Danny Sjursen gathering coordinates to set up an airstrike while under fire during a patrol in Afghanistan’s Kandahar province.

If the reader will forgive the seeming callousness of the sentiment—since Afghans are actually scared and suffering in the wake of America’s obvious defeat—I sort of hope this is my final weigh-in on the U.S. chapter of this particular conflict. But truth be told, odds are I’ll be as wrong about that as I was in predictions of the probable speed Kabul’s fall.

Either way, the crucial question that’s on everyone’s minds seems to be: how did this happen? How did the ostensibly—and somewhat self-styled—most powerful military in history fail against what, when interviewed in Kandahar in 2011, I only slightly satirically called “farm-boys with guns”? Of course, the question itself is partially problematic—denying the Taliban and average Afghans agency, and arrogantly placing America at the center of a Central Asian conflict. This should be a time for self-reflection and humility. Unfortunately, exceptionalist hegemons are hardly known for their humbleness, and I’m hardly hopeful we’ll see much of that virtue, or any accountability, in the coming days, weeks, months, or years. I fear Americans, and especially their elite leaders, aren’t exactly the lesson-learning sorts.

Anyway, while the answers to that prevailing question—the whole “what went wrong?” bit—are manifold and complex, it seems most can be folded under two words: disingenuousness and self-delusion. Almost 20 years ago, Uncle Sam sauntered-up to the Afghan roulette table and placed a huge war-wager on the taxpayer-credit card—with the Afghan people on the hook as un-consulted co-signers. Yesterday, U.S. bluffs were called and all debts called-in—Washington’s interventionist-addicts again learning the hardest of lessons: bet big, lose big. The fallout of all this has a rather ugly-aesthetic, as videos show that the Taliban-bank has repossessed American HMMWVs, drones, and small arms aplenty.

The four key lies U.S. military and civilian leaders told themselves these two decades—which one wonders if any of them actually believed, after the Washington Post’s 2019 Afghanistan Papers release—and the delusions they allowed themselves were these:

That may sound like one hell of an indictment, but the thing is, I’m pretty sure I’m underselling it. What’s happening right now is a collective exposure of America’s—and Americans’—collective guilt. An exposure of false promises, unconscionable hubris, and the gap between grandiose grandstanding U.S. rhetoric and the ugly reality of ground-level failure and futility. The fall of Kabul also exposes exactly who and what America really is in the world, and who and what it is not. None of us should have been able to sleep last night, nor tonight. That most did and will sleep—soundly and with consciences-a-clear—may ultimately prove the worst indictment at all: of a careless people who inflict mass suffering and death oh-so-breezily, while barely noticing the damage done.

The parallels with (U.S. Army veteran) F. Scott Fitzgerald’s own indictment of the privileged classes at the end of The Great Gatsby are almost too disturbing to recount, but I’ll type it, and we all ought read it, anyway … and carefully:

“They were careless people … they smashed up things and creatures and then retreated back into their money or their vast carelessness … and let other people clean up the mess they had made.”

Well, I was admittedly once a professional mess-maker—and because karma has me living in the mental mess I’ve made, I actually didn’t sleep last night, and may not tonight. Darkness and solitude conjure faces of soldiers killed and maimed on my orders, or my sometime mistakes and inadequacies—plus the mothers, spouses, and children for whom I can never answer the only question that really matters: What was it all for?

So here’s to another evening, and another tomorrow, spent trying not to cry and pretending that I’m like “the others” who barely notice their country’s crimes or carelessness; trying desperately to mask the sometimes crippling cerebral cocktail of sadness, self-righteousness, and insufferable anger that I ultimately volunteered for way back when.

Danny Sjursen is a retired U.S. Army officer, the director of the Eisenhower Media Network (EMN), a senior fellow at the Center for International Policy (CIP), contributing editor at Antiwar.com, and co-hosts the podcast “Fortress on a Hill.” His work has appeared in the NY Times, LA Times, The Nation, The Hill, Salon, The American Conservative, and Mother Jones, among other publications. He served combat tours in Iraq and Afghanistan and taught history at West Point. He is the author of three books, Ghostriders of Baghdad: Soldiers, Civilians, and the Myth of the Surge, Patriotic Dissent: America in the Age of Endless War, and most recently A True History of the United States. Follow him on Twitter @SkepticalVet.

Danny Sjursen is a retired U.S. Army officer, the director of the Eisenhower Media Network (EMN), a senior fellow at the Center for International Policy (CIP), contributing editor at Antiwar.com, and co-hosts the podcast “Fortress on a Hill.” His work has appeared in the NY Times, LA Times, The Nation, The Hill, Salon, The American Conservative, and Mother Jones, among other publications. He served combat tours in Iraq and Afghanistan and taught history at West Point. He is the author of three books, Ghostriders of Baghdad: Soldiers, Civilians, and the Myth of the Surge; Patriotic Dissent: America in the Age of Endless War, and most recently A True History of the United States. Follow him on Twitter @SkepticalVet.