The Roar of a U.S. Warplane Over a Civilian Irish Airport

“This is not a regular airport,” Margaretta D’Arcy said to me as we heard a C-130T Hercules prepare to take off from Shannon Airport in Ireland after 3 pm on September 11, 2022. That enormous U.S. Navy aircraft (registration number 16-4762) had flown in from Sigonella, a U.S. Naval Air Station in Italy. A few minutes earlier, a U.S. Navy C-40A (registration number 16-6696) left Shannon for the U.S. military base at Stuttgart, Germany, after flying in from Naval Air Station Oceana in Virginia. Shannon is not a regular airport, D’Arcy said, because while it is merely a civilian airport, it allows frequent U.S. military planes to fly in and out of it, with Gate 42 of the airport functioning as its “forward operating base.”

At the age of 88, D’Arcy, a legendary Irish actress and documentary filmmaker, is a regular member of Shannonwatch, comprising a group of activists who have—since 2008—held monthly vigils at a roundabout near the airport. Shannonwatch’s objectives are to “end U.S. military use of Shannon Airport, to stop rendition flights through the airport, and to obtain accountability for both from the relevant Irish authorities and political leaders.” Edward Horgan, a veteran of the Irish military who had been on peacekeeping missions to Cyprus and Palestine, told me that this vigil is vital. “It’s important that we come here every month,” he said, “because without this there is no visible opposition” to the footprint of the U.S. military in Ireland. 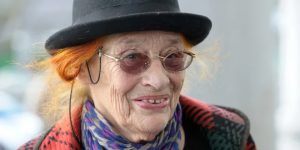 According to a report from Shannonwatch titled “Shannon Airport and 21st Century War,” the use of the airport as a U.S. forward operating base began in 2002-2003, and this transformation “was, and still is, deeply offensive to the majority of Irish people.”

Article 29 of the Irish Constitution of 1937 sets in place the framework for the country’s neutrality. Allowing a foreign military to use Irish soil violates Article 2 of the Hague Convention of 1907, to which Ireland is a signatory. Nonetheless, said John Lannon of Shannonwatch, the Irish government has allowed almost 3 million U.S. troops to pass through Shannon Airport since 2002 and has even assigned a permanent staff officer to the airport. “Irish airspace and Shannon Airport became the virtual property of the U.S. war machine,” said Niall Farrell of Galway Alliance Against War. “Irish neutrality was truly dead.”

Margaretta D’Arcy’s eyes gleam as she recounts her time at the Greenham Common Women’s Peace Camp, located in Berkshire, England, and involving activists from Wales, who set up to prevent the storage and passage of U.S. cruise missiles at this British military base. That camp began in 1981 and lasted until 2000. D’Arcy went to jail three times during this struggle (out of a total of at least 20 times she was in prison for her antiwar activism). “It was good,” she told me, “because we got rid of the weapons and the land was restored to the people. It took 19 years. Women consistently fought until we got what we wanted.” When D’Arcy was arrested, the prison authorities stripped her to search her. She refused to put her clothes back on and went on both a hunger strike and a naked protest. In doing so, she forced the prison authorities to stop the practice of performing strip searches. “If you act with dignity, then you force them to treat you with dignity,” she said.

Part of this act of dignity includes refusing to allow her country’s airport to be used as part of the U.S. wars in Afghanistan and Iraq. Since 2002, several brave people have entered the airport and have attempted to deface U.S. aircraft. On September 5, 2002, Eoin Dubsky painted “No way” on a U.S. warplane (for which he was fined); and then on January 29, 2003, Mary Kelly took an axe onto the runway and hit a military plane, causing $1.5 million in damage; she was also fined. A few weeks later, on February 3, 2003, the Pitstop Ploughshares (a group of five activists who belonged to the Catholic Worker Movement) attacked a U.S. Navy C-40 aircraft—the same one that Mary Kelly had previously damaged—with hammers and a pickaxe (a story recounted vividly by Harry Browne in Hammered by the Irish, 2008). They also spray-painted “Pitstop of Death” on a hangar. 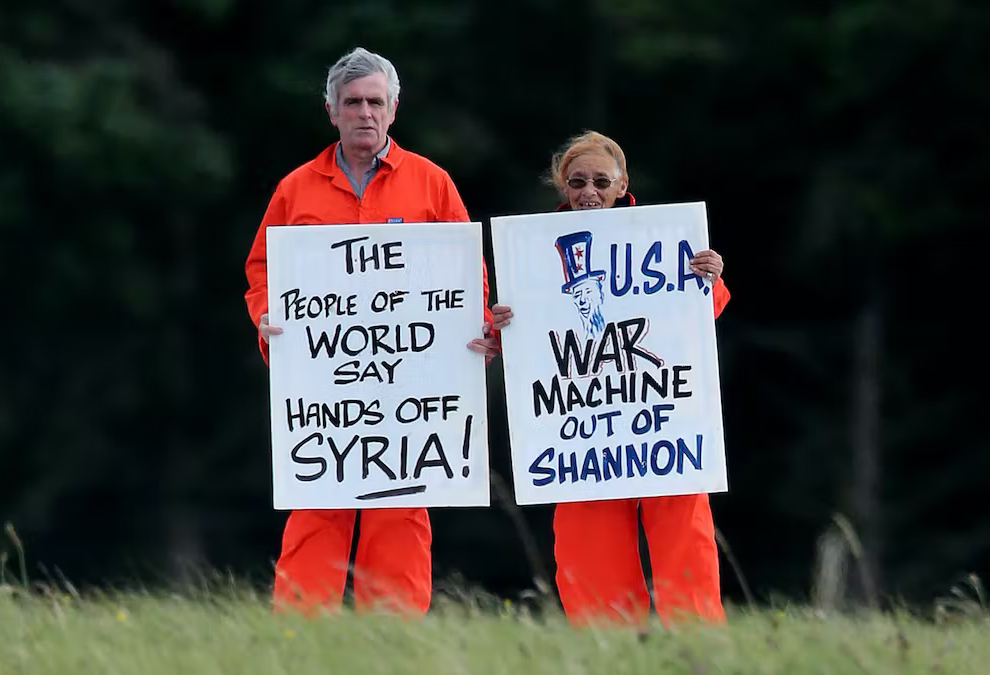 Niall Farrell and Margaretta D’Arcy on the airfield at Shannon Airport.

In 2012, Margaretta D’Arcy and Niall Farrell marched onto the runway to protest the airport being used by U.S. planes. Arrested and convicted, they nonetheless returned to the runway the next year in orange jumpsuits. During the court proceedings in June 2014, D’Arcy grilled the airport authorities about why they had not arrested the pilot of an armed U.S. Hercules plane that had arrived at Shannon Airport four days after their arrest on the runway. She asked, “Are there two sets of rules—one for people like us trying to stop the bombing and one for the bombers?” Shannon Airport’s inspector Pat O’Neill replied, “I don’t understand the question.”

The U.S. government began illegally transporting prisoners from Afghanistan and other places to its prison in the Guantánamo Bay detention camp and to other “black sites” in Europe, North Africa, and West Asia. This act of transporting the prisoners came to be known as “extraordinary rendition.” In 2005, when Dermot Ahern, Ireland’s minister for foreign affairs, was asked about the “extraordinary rendition” flights into Shannon Airport, he said, “If anyone has any evidence of any of these flights, please give me a call and I will have it immediately investigated.” Amnesty International replied that it had direct evidence that up to six CIA chartered planes had used Shannon Airport approximately 50 times. Four years later, Amnesty International produced a thorough report that showed that their earlier number was deflated and that likely hundreds of such U.S. military flights had flown in and out of the airport. 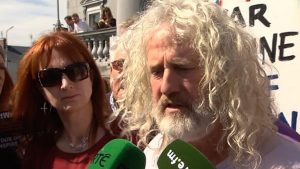 While the Irish government over the years has said that it opposes this practice, the Irish police (the Garda Síochána) have not boarded these flights to inspect them. As a signatory of the European Convention on Human Rights (signed in 1953) and the United Nations Convention Against Torture and Other Cruel, Inhuman or Degrading Treatment or Punishment (adopted in 1984 and ratified in 1987), Ireland is duty-bound to prevent collaboration with “extraordinary rendition,” a position taken by the Irish Council for Civil Liberties. In 2014, Irish parliamentarians Mick Wallace and Clare Daly were arrested at Shannon Airport for trying to search two U.S. aircraft that they believed were carrying “troops and armaments.” They were frustrated by the Irish government’s false assurances. “How do they know? Did they search the planes? Of course not,” Wallace and Daly said.

Meanwhile, according to the Shannonwatch report, “Rather than take measures to identify past involvement in rendition or to prevent further complicity, successive Irish [g]overnments have simply denied any possibility that Irish airports or airspace were used by U.S. rendition planes.”

In 2006, Conor Cregan rode his bicycle near Shannon Airport. Airport police inspector Lillian O’Shea, who recognized him from protests, confronted him, but Cregan rode off. He was eventually arrested. At Cregan’s trial, O’Shea admitted that the police had been told to stop and harass the activists at the airport. Zoe Lawlor of Shannonwatch told me this story and then said, “harassment such as this reinforces the importance of our protest.”

In 2003 and 2015, Sinn Féin—the largest opposition party in the Northern Ireland Assembly—put forward a Neutrality Bill to enshrine the concept of neutrality into the Irish Constitution. The government, said Seán Crowe of Sinn Féin, has “sold Irish neutrality piece by piece against the wishes of the people.” If the idea of neutrality is adopted by the Irish people, it will be because of the sacrifices of people such as Margaretta D’Arcy, Niall Farrell, and Mary Kelly.

Vijay Prashad is an Indian historian, editor, and journalist. He is a writing fellow and chief correspondent at Globetrotter. He is an editor of LeftWord Books and the director of Tricontinental: Institute for Social Research. He is a senior non-resident fellow at Chongyang Institute for Financial Studies, Renmin University of China. He has written more than 20 books, including The Darker Nations and The Poorer Nations. His latest books are Struggle Makes Us Human: Learning from Movements for Socialism and (with Noam Chomsky) The Withdrawal: Iraq, Libya, Afghanistan, and the Fragility of U.S. Power.