Call for End to U.S. Blockade

The Golden Rule anti-nuclear sailboat, crewed by U.S. veterans and friends, has successfully completed a historic voyage to Cuba. The 34-foot wooden ketch, which in 1958 was sailed toward the Marshall Islands to interfere with U.S .nuclear testing, is owned by Veterans For Peace, and carries out an important part of its mission, “to end the arms race and to reduce and eventually eliminate nuclear weapons.”

Five crew, including several members of Veterans For Peace, sailed the Golden Rule from Key West, Florida, and, after 22 hours at sea, arrived at Havana’s Marina Hemingway on December 31, just in time to celebrate New Year’s and the 62nd anniversary of the Cuban Revolution.

The Golden Rule was sailed to Havana under a General License issued by the U.S. Treasury Department that allows U.S. residents to travel to Cuba for educational and people-to-people purposes.

The Golden Rule crew was joined by seven others who flew into Havana to participate in a weeklong educational program. The Proximity Cuba tour agency organized an arts and culture program that highlighted many facets of the rich and diverse Cuban culture, including Afro-Cuban music and dance. The Golden Rule delegation also held a well-attended press conference that was featured on the top of the Cuban TV news and in other Latin American media.

“We are on an educational mission,” says Golden Rule Project Manager Helen Jaccard. “We are four months into a 15-month, 11,000-mile voyage around the “Great Loop” of the Midwestern, Southern and Northeastern United States.

“When we saw we would be in Key West at the end of December, we said, ‘Hey, Cuba is only 90 miles away, and the world almost had a nuclear war over Cuba,’” said Jaccard. 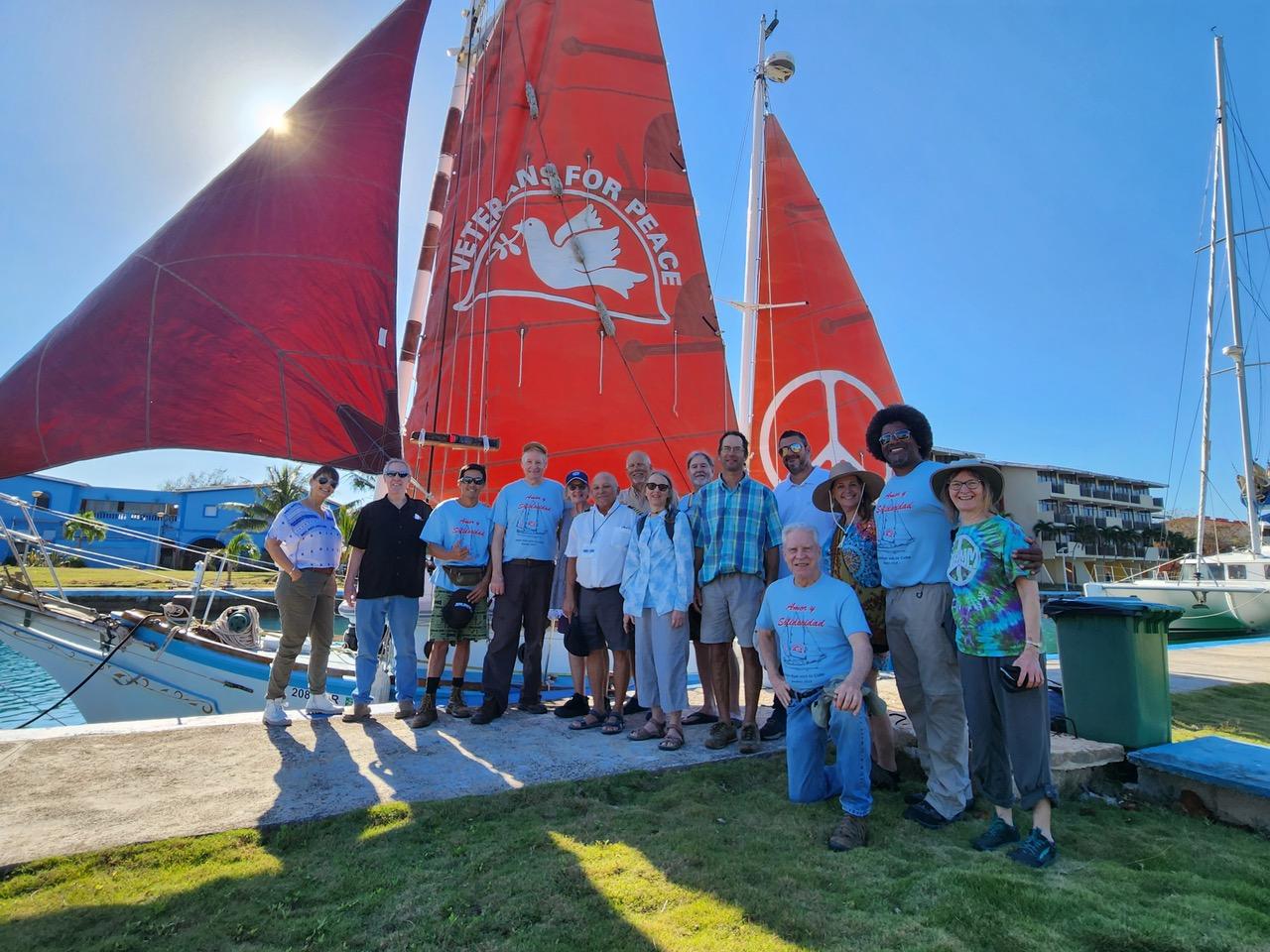 Sixty years ago, in 1962, the world came perilously close to a civilization-ending nuclear war during what became known as the “Cuban Missile Crisis.” How did that happen? Many of us will remember that the Kennedy administration discovered that the Soviet Union had placed nuclear missiles in Cuba, within easy striking distance of U.S. cities. This was of course unacceptable, but it was a response to the U.S. placing nuclear missiles in Turkey near the USSR. And the CIA had recently organized the “Bay of Pigs” invasion, a failed attempt to overthrow the government of Fidel Castro. President Kennedy ordered a naval blockade of Cuba, leading to a nuclear standoff with the USSR. Kennedy and Soviet premier Nikita Krushchev then successfully negotiated to avoid a nuclear war that neither man wanted.

Without U.S. hostility to an independent, socialist Cuba, we would not have come so close to nuclear war in 1962. There are a lot of lessons to learn from the Cuban Missile Crisis. But have they been learned? Some people think that the U.S. prevailed because of Kennedy’s get-tough policy. They do not know of the secret deal Kennedy made with Kruschchev – Kennedy quietly had U.S. missiles removed from Turkey several months later.

The United States seems to be making the same mistakes in Ukraine today. This time it is the United States and NATO that have moved hostile military forces, including nuclear weapons systems, close to Russia’s borders. Veterans For Peace is part of the Peace In Ukraine Coalition, which is calling for diplomacy to end the war in Ukraine, not weapons to prolong it.

Veterans For Peace has been calling for an end to the U.S. blockade of Cuba for many years. Now some in the United States are calling for at least a temporary suspension of the blockade, to allow Cuba to rebuild after Hurricane Ian, which destroyed as many as 10,000 homes in the western province of Pinar del Rio.

“We carried humanitarian aid and delivered it to Pinar del Rio,” said Anthony Donovan, a member of New York City Veterans For Peace who flew to Cuba to greet the Golden Rule. “We also witnessed the economic suffering that is being caused by the cruel 60-year U.S. blockade of Cuba. We will be telling people about this wherever the Golden Rule sails. When people learn about the suffering that the U.S. government is causing normal Cuban citizens, they will join Veterans For Peace in calling for the U.S. blockade to finally end.”

The primary message of the Golden Rule is the urgency of stepping back from the brink of nuclear war, and of abolishing nuclear weapons altogether. The VFP Golden Rule Project encourages local communities to pass resolutions calling on the U.S. to sign the historic Treaty on the Prohibition of Nuclear Weapons, which was approved by the General Assembly in July 2017 by a vote of 122-1.

Veterans For Peace has produced its own VFP Nuclear Posture Review, which concludes in part:

It is hard to imagine the U.S. taking serious steps toward nuclear disarmament without a sea change in the thinking among its political elites and real change in its posture toward the rest of the world. Activist efforts to restrain U.S. militarism and intervention around the globe, to cut the military budget, and to encourage mutual respect and diplomacy among nations must therefore go hand-in-hand with efforts to reduce and eliminate all nuclear weapons.

This is why the VFP Golden Rule Project will now be calling for an end to the U.S. blockade of Cuba. Nuclear disarmament will only be achieved in tandem with a peaceful U.S. foreign policy, and we must organize simultaneously for both.

On December 9, the beautiful wooden boat, her red sails emblazoned with a white peace sign and Veterans For Peace logo, sailed along the famed Malecon sea wall of Havana, and was later greeted by members of Cuba’s Quaker community. On the following day, the Golden Rule and her intrepid crew sailed out of Marina Hemingway and made a 43-hour transit to Miami, arriving on the morning of January 12. 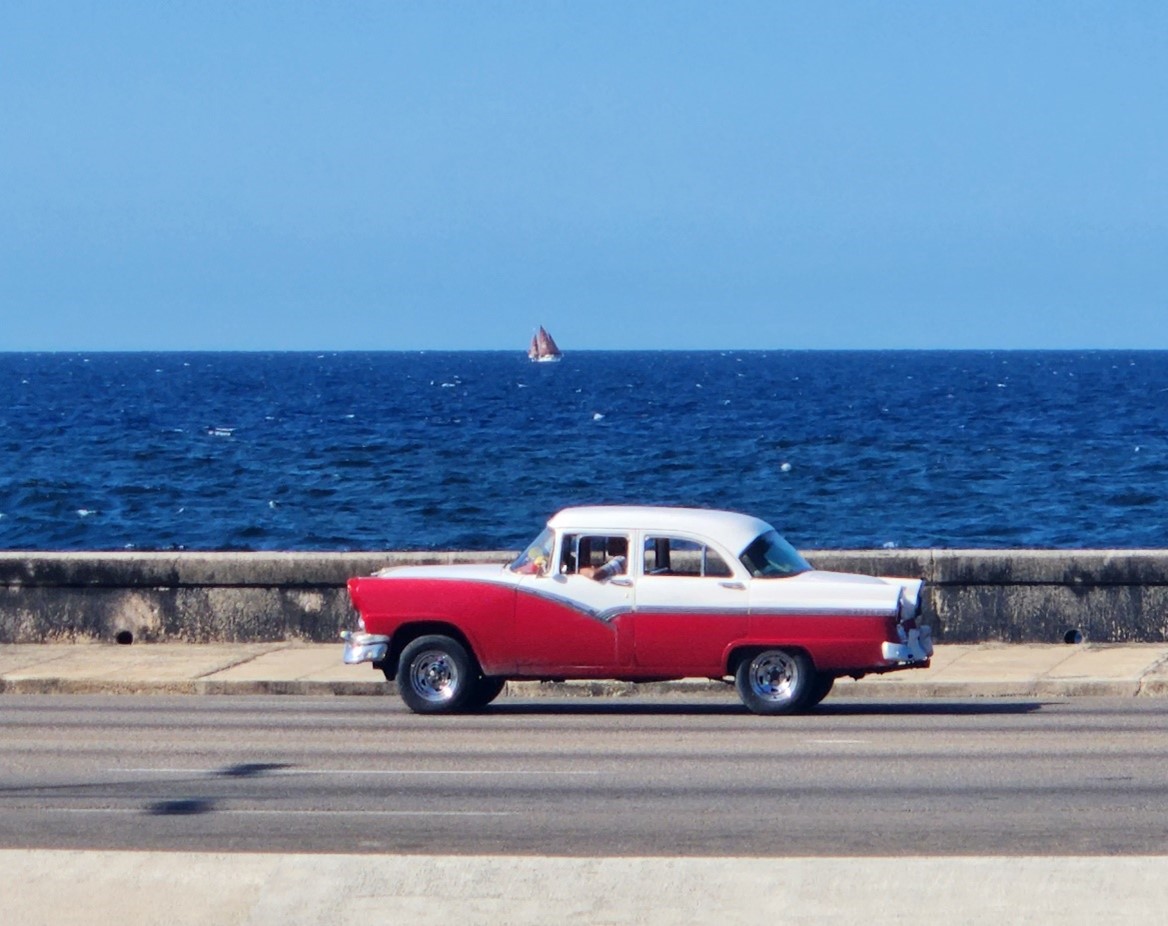 Golden Rule sails along Havana’s famed Malecon sea wall – Is that a ’55 Chevy?

On Sunday, January 22, the second anniversary of the Treaty on the Prohibition of Nuclear Weapons going into effect, the Golden Rule anti-nuclear sailboat will set sail for Fort Lauderdale, West Palm Beach and Jacksonville, among other Florida stops, before continuing further north on its “Great Loop” educational voyage – another year to go.  See schedule here.

For more information about the Golden Rule, or to make a tax-deductible donation, please go to www.vfpgoldenrule.org.

Gerry Condon is a Vietnam-era veteran and war resister, a former president of Veterans For Peace, and a member of the crew that sailed the Golden Rule to Cuba. He can be reached by email at gerrycondon@veteransforpeace.org.