S. Brian Willson on His Transformation into an Activist

‘I feel shaken by the way they have honored me, for my work in favor of justice and peace in the world.’

Below are remarks made by S. Brian Willson Sept. 1 on being awarded an honorary doctorate in humanities at National Autonomous University of Nicaragua in Managua.

It wouldn’t be fair to say I’m outmatched, I feel more than outmatched. I thought that today I came to deliver some books for the young people; It’s a book about the history of the United States and the war, it’s called Addicted to War. So I am shaken by the way I have been honored, for my work in favor of justice and peace in the world.

You should know that when I lay down on the railroad, with two more veterans and about 45 witnesses, what I expected was to go to jail for a year. I did not know that I had been designated as a terrorist suspect, nor that the train crew had been ordered not to stop.

So that day, when I positioned myself I wasn’t worried about my safety; three days later I woke up in a hospital and my partner from that time was next to me, and I saw the flowers lying around the bed, and I said to myself: Why does this cell have flowers? I don’t remember what happened, I have no memory of what happened that day, September 1st. At that moment my friends and my partner told me what had happened, that the train did not stop.

So it was on the TV in my room at the hospital where I watched the news every night, for about 8 days, the replication of the video of what had happened to me. I still didn’t believe that had happened. But I had a friend that day who had his camcorder, who wanted to make sure that when they stopped me it was recorded, and when the train didn’t stop, he actually dropped his camera because he was so surprised. So I didn’t order that train to hit me, that was their decision.

I first learned about the Revolution from the Vietnamese while I was there participating in the cruelty against the Vietnamese and their villages. I saw how the Vietnamese lived, how they worked and how they tried to live with the invasion of those invaders of which I was one.

I thought that I was a good boy, from a small town, who went to Mass every Sunday and was serving my Country, but I quickly realized that all this was a lie; a series of crimes against humanity every day and every night on all sides of the planet. So I started studying United States History.

I realized that all the history that I had been taught, beginning in 1607, was a myth, a story that was heard beautifully, that we were told in our homes, in our communities, in our churches, for 20 generations. A deeply nosy story.

Since I learned my lesson, my deep lesson in Vietnam, I came back home and I knew I had to tell the truth, after realizing that we have been doing that, the United States, all over the planet for a long time, beginning in this Hemisphere and later in all sides of the planet, more than Rome.

Although it was never my intention to be an activist, I became one by listening to the inner guidance of my heart, which told me that I had to speak the truth and seek justice.

I found out that I was in a minority, but one of the first things I realized was that I couldn’t continue paying taxes to a government that was killing people in Latin America and around the world. What sense did it make for me to be giving money to an organization that is committing mass murder?

I got rid of my car, my house, all my possessions, and I had many meetings with the Treasury explaining that I did not have to pay any taxes. I had more than a dozen meetings with Hacienda over a decade. They said that I had to pay all the money they said I owed them, and I told them: It’s not that complicated, I’m not going to pay for the homicide! I’m not stupid, like I was.

That was the beginning, for me, of thinking what are the consequences of my own actions, and the actions and policies of my country towards other people in other places. And all of my actions over the years, of civil disobedience, of blocking a gate, of going on extended fasts, were not complicated, it was simply responding to injustice. 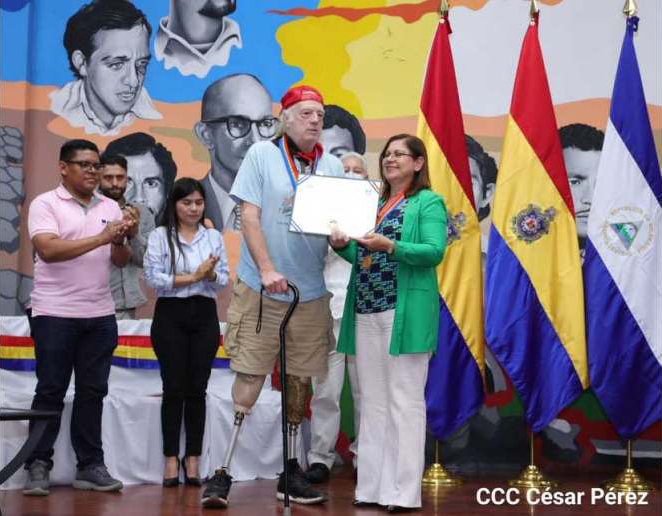 Willson speaking on Sept. 1, 2022, accepting an honorary doctorate in humanities from the National Autonomous University of Nicaragua in Managua.

Perhaps it was my upbringing in the countryside where things are slower and easier and somehow I wanted to replicate that in my actions as an adult. But my parents never understood me after I came back from the war; until they died they never understood what I was thinking and what I was doing. But once the toothpaste comes out of the tube you will never put it back. There was no turning back!

And in Nicaragua, when I came for the first time in 1986 to study Spanish, I had been there for 5 days when the Contras attacked 3 cooperatives and killed several peasants. And that is what the United States does everywhere: They kill peasants, they kill poor people. Unfortunately for me, I was so angry that, lacking the vocabulary in Spanish, I looked for people who spoke English in Estelí in order to express the anger I felt for that violence.It makes me very sad and sometimes depresses me that after studying Spanish for 10 months at the School I still don’t understand or speak Spanish. And I told myself, I’m not going to move to Nicaragua until I learn Spanish, but when I turned 77, I was so tired of the gringo culture that I decided to move to Nicaragua once and for all. There was no way I was going to live with translators and interpreters, but I wasn’t going to return.

The truth is that you are my heroes; the Vietnamese are my heroes. They are the ones who taught me to fight and work tenaciously for justice. And Nicaraguans have the great fortune of having had a Revolution of which I consider myself a part, even though I am a gringo-nica.

So, I thank you all for attending the event where I thought I was going to deliver some books, I did not imagine that this grand ceremony was going to be.

I have brought you 3,700 copies of a book in Spanish called Adicto a la Guerra. It is a book that was written and illustrated by a gringo who studied the Chinese Revolution and went to China to study it and get his PhD from it. And it is an incredible book, because it tells not the history of Nicaragua but the history of North American imperialism, and in the United States there are some 350,000 copies of this book in English, which are being used in classrooms by good teachers who do not even tell the principal who are using it in their classrooms.You already have a lot of experience dealing with bullying in the North, but you’re going to see things here that you don’t know. So I hope that soon you’re reading this book and you’re going to see the great sense of humor he has in drawing and telling the story, so you’re going to be laughing as well as crying when you read that book. Here are two boxes of these books, but there are 35 more boxes outside.

I cannot thank you enough for the honors you have given me, for this doctorate, for this ceremony, I cannot thank you enough. I have never felt that I am brave, for me it has been very simple, you respond to the Justices, regardless of whether the government responds or not. It has never been an intellectual question for me, I have not required much intellectual understanding to do what I do, it is the most basic thing in the world. I don’t understand why others sometimes don’t understand.

Thanks, university. Thank you, teachers, administrators, students. I will always be Nicaraguan, and I will be until I am on Earth.