No ‘Fixing’ This Industry

My city sits on the western edge of a body of water that has figured large in the nation’s history, Lake Erie. My wife and I are fortunate to live in the part of Toledo where the lake is literally our front yard.

In grade school history classes that consisted mostly of memorizing wars and generals, we learned that in the first battle for Lake Erie a small American fleet of wooden ships built in Erie, Pennsylvania, by Commodore Oliver Hazard Perry, defeated the British in the War of 1812. Consequently, Michigan and Ohio are not the southern boundary of Canada.

Later, I witnessed a second battle for Lake Erie in the 1960s and ’70s when outraged citizens demanded industries and cities quit dumping waste and raw sewage that threatened to turn the world’s 11th largest body of fresh water into a thick, fetid stew unable to sustain life. Lake Erie became a poster child for the environmental movement which eventually forced Richard Nixon to sign the Clean Water Act (CWA). Regulatory law in the U.S. has a history of leaving the regulated more powerful than the regulators, but Lake Erie and many other bodies of water made significant comebacks until blocked by corporate influence and cooling public fervor. 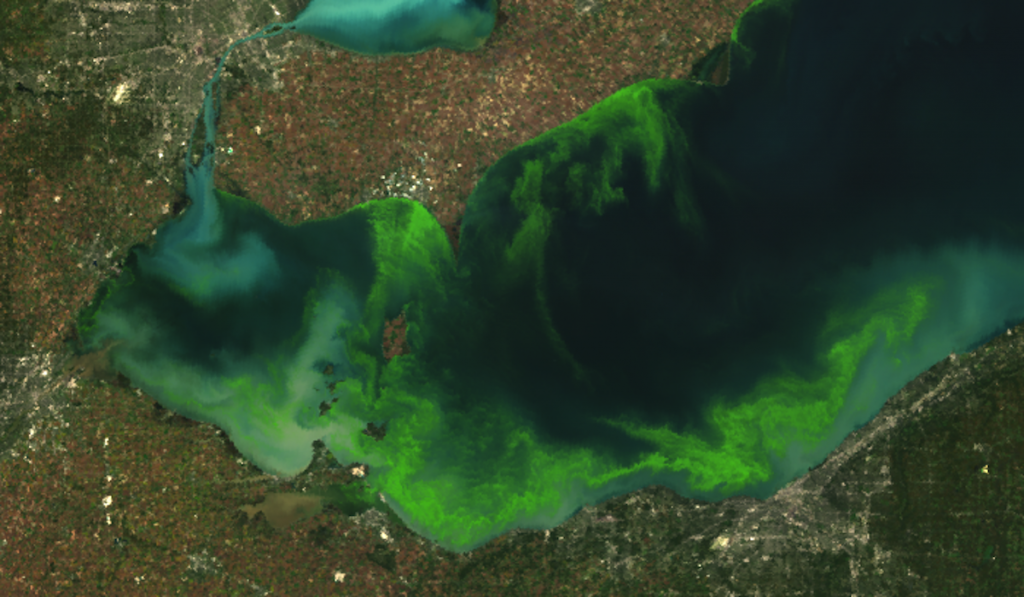 The third battle for Lake Erie is happening right now.

As the lake was being rescued through the late ’70s, polluters were held accountable and thousands of good jobs were created building the infrastructure to control pollution from industry and municipalities.  Many species of flora and fauna returned and Erie became known as the walleye capital of the world as well as a source of drinking water for eleven million people.

That respite lasted barely 20 years. In the mid-’90s, industrial agriculture gained a foothold in the lake’s 8,000 square-mile western basin which drains mostly via the Maumee River at Toledo.

They choke on noxious fumes of their own waste, are crowded together making antibiotic-laced feed necessary to prevent disease and live a miserable existence no sentient creature should have to endure.  Just one side effect of this system is the rising occurrence of antibiotic-resistant bacteria. Small wonder when 80% of antibiotic usage in the U.S. is in animal feed and 98% of meat eaten in this country is produced in these factories.

Something else happens in these enormous sheds located behind earth berms or set back far from the road that military veterans will recognize. Conditions in them dehumanize workers just as surely as they brutalize the animals. Covertly recorded videotapes expose crimes against humane animal laws reminiscent of soldiers committing crimes against humanity and the Geneva Conventions.

Decades after my own military experience during the Vietnam war, I took up the cause of Lake Erie and began to also research the reality of industrial animal production. I was familiar with the fact that animals were inhumanely housed but it wasn’t until I saw footage of workers cruelly abusing animals that I made the connection with war.

Veterans For Peace has long agreed with the Nuremberg Tribunal that war is the ultimate crime because it creates the conditions wherein humans commit actions they never thought they would or could do to other sentient creatures. In other words, if you don’t want your citizens committing war crimes, don’t send them to war because the one automatically follows the other.

The conditions inherent in our system of industrially producing milk, meat and eggs, creates the conditions wherein humans do things they never thought they would or could do to other sentient creatures.

Our group, Lake Erie Advocates, started in late 2015 and for several years focused strictly on how animal feeding factories poison the lake with their waste. You may have heard about Toledo having to tell 400,000 water customers not to drink, boil or bathe in the city’s water for three days back in 2014. That woke up a lot of people and the shock waves have not entirely subsided.

For example, the Phosphorus excreted by animals, including humans, is the main driver of what’s commonly called “toxic algae” blooms on the lake every summer – so large they are quite visible from outer space.

The “algae,” which is actually Microcystis bacteria, releases the highly potent toxin, Microcystin, when it’s stressed or dies.  On a list of toxins, Microcystin is right below dioxin and much worse than DDT or Cyanide. That’s why, in 2014, when 6 parts per billion showed up in the city’s treatment plant, the water ban was announced.

Those 25,000,000 confined animals in our watershed excrete an amount of Phosphorus equivalent to the combined human populations of Ohio, Indiana, Chicago and Atlanta taking a dump on the fields draining into Lake Erie, with absolutely no treatment.  Small wonder the lake turns toxic every summer when warm water combines with tons of Phosphorus, E.coli bacteria, Nitrogen, feces, urine, antibiotics, blood and lord knows what else.

Four years ago, LEA agreed to become a plaintiff in a federal lawsuit filed by the Environmental Law and Policy Center, with the goal of forcing the U.S. EPA to enforce the Clean Water Act and start holding factory “farm” operators accountable for their polluting practices. We are still in court.

Two years ago, Toledoans for Safe Water, an affiliate of the Community Environmental and Legal Defense Fund, gathered 10,000 signatures on initiative petitions to place a “rights of nature” issue on Toledo’s ballot, called the Lake Erie Bill of Rights. It amended the city’s charter to allow citizens to sue polluters on behalf of the lake which it vested with the right to evolve and flourish, elevating it above the status of “property.”  As many now know, corporations have enjoyed the same constitutional protections as human beings for over a century. The LEBOR said it’s about time nature was treated at least equally.

It gained national and international attention and was passed by a 60 to 40 percent margin. Within 24 hours, the same group of corporations who paid for a $320,000 “Vote No” campaign, paid to file suit in federal court alleging that their client, a farmer 50 miles outside Toledo, would be harmed if the law were put into effect.  After dismissing a request from the organizers of the measure to be a party to the case, Federal Judge Zouhary declared LEBOR unconstitutional. The City of Toledo, as defendant, did an admirable job arguing for the measure, but failed to appeal the judge’s decision.

When even Toledo’s mayor has charged that the legislature is a wholly-owned subsidiary of the Farm Bureau, when political corruption allows Ohio to permit more and more of these facilities, when courts rebuff citizen attempts to protect the lake and regulators refuse to do so, we decided our earlier conclusion that there is no “fixing” this industry should be stated in a campaign “writ large” on billboards.

We quickly surpassed the initial $10,000 goal for billboards in Toledo, expanding to two more in Cleveland and two in Columbus, plus had enough to fly a banner demanding “Ban Factory ‘Farms’” above the opening ceremony of the international Solheim Cup women’s golf tournament held this year in Toledo.

Nothing changes until people start talking about it and that’s exactly what our group is provoking.

In “Brave New World Revisited,” Aldous Huxley observed that “The real hopeless victims of mental illness are to be found among those who appear to be most normal. Many of them are normal because they are so well adjusted to our mode of existence, because their human voice has been silenced so early in their lives, that they do not even struggle or suffer or develop symptoms as the neurotic does… (they are only normal) in relation to a profoundly abnormal society. Their perfect adjustment to that abnormal society is a measure of their mental sickness. These millions of abnormally normal people, are living without fuss in a society to which, if they were fully human beings, they ought not to be adjusted.”

If Lake Erie Advocates, with its billboards, legal challenges, picket lines and airplane banners is successful, it will be to the extent we get enough people to stop, as Huxley said, “living without fuss in a society to which, if they were fully human beings, they ought not to be adjusted.”

Mike Ferner was a hospital corpsman during the Vietnam War and has travelled to Iraq and Afghanistan.  He is a past president and executive director of Veterans For Peace.