SAN DIEGO, the United States, Sept. 15–A group of veterans in California started a series of protests Tuesday along I-15, a key freeway linking Los Angeles and San Diego, calling on the U.S. military to cancel the Miramar Air Show and take other measures to deal with the climate crisis.

“Air Show Fuels Climate Crisis,” read a huge banner hung up on the sidewalk of the freeway by these grey-haired men and women, all members of the Veterans For Peace (VFP), who also handed out flyers and stickers saying “U.S. Militarism Fuels Climate Crisis” to drivers.

U.S. military is the world’s single largest institutional consumer of fossil fuels and the single largest emitter of greenhouse gases.
The Miramar Air Show is an annual event held at Marine Corps Air Station Miramar in San Diego. The three-day event is the largest military air show in the United States, with total annual attendance estimated at 700,000. The veterans argue that the Sept. 23-25 show is a discretionary display for entertainment purposes that needlessly pollutes the environment.

“We feel that the air show is a gratuitous use of the military when it’s unnecessarily polluting our skies,” Gary Butterfield, a Vietnam War veteran, explained. “We are here in order to get not only the military’s attention, but also the attention of our fellow citizens in San Diego.” 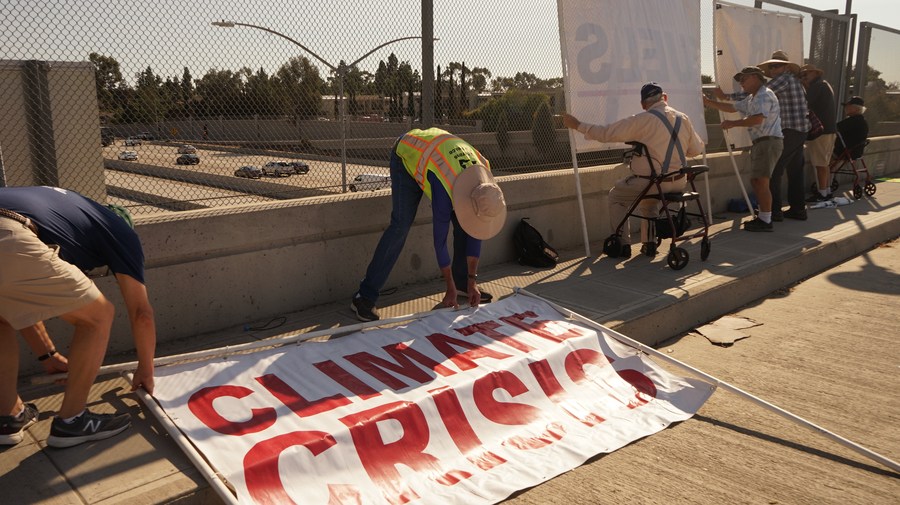 Butterfield noted that the U.S. military is the world’s single largest institutional consumer of fossil fuels and the single largest emitter of greenhouse gases, according to a research released by Boston University in 2019.

“Militarism has a profound effect on the climate crisis, and people in this country aren’t really aware of it, particularly since military emissions have been overlooked and undercounted.”

The research, conducted by Neta C. Crawford, professor and chair of political science at Boston University and co-director of the Costs of War project at Brown and Boston universities, said that from fiscal year 1975 to fiscal year 2018, total U.S. military greenhouse gas emissions were more than 3,685 million metric tons of CO2 equivalent.

“While only a portion of U.S. total emissions, U.S. military emissions are, in any one year, larger than the emissions of many countries,” the research said.

Moreover, Butterfield suggested the world should be made aware of the close link between the climate crisis and militarism. 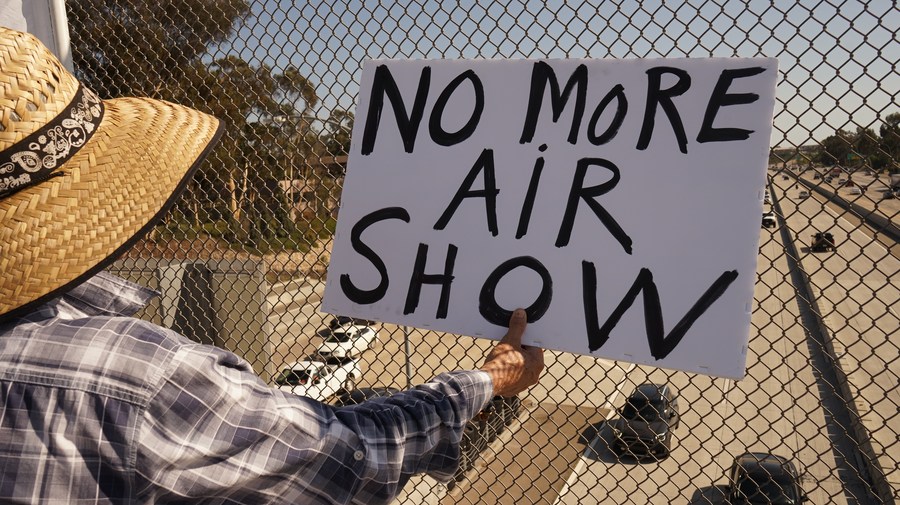 “Militarism has a profound effect on the climate crisis, and people in this country aren’t really aware of it, particularly since military emissions have been overlooked and undercounted,” he said.

VFP gathered hundreds of endorsements from organizations and prominent individuals worldwide for an open letter to U.S. climate envoy John Kerry, saying his work should include addressing the U.S. military’s role in the climate crisis.

“More and more people are starting to think about it and that’s what we want people to think about it, and engage in a dialogue about what we can do together to solve this issue. The climate crisis isn’t gonna stop because there’s a conflict or a war somewhere. It’s relentless,” Butterfield said.

Learn more about protests against the Miramar Air Show, supported by many community, climate, faith and peace groups in San Diego, from San Diego Veterans For Peace.