The first six weeks of the Golden Rule’s “Great Loop” voyage has been amazing, and give us great confidence in the viability of this ambitious undertaking. We have had 40 events in 19 cities, prominent articles and photos in local newspapers, radio and TV interviews, lots of education, excitement and participation, many volunteers to work on and crew the Golden Rule, and $11,000 in donations.

Here are some of the highlights: 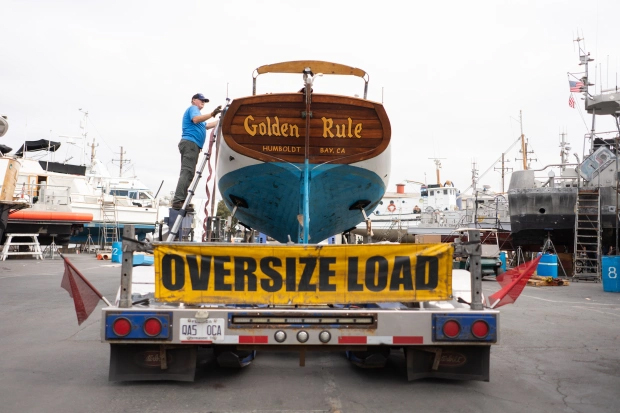 In late August we successfully trucked the Golden Rule from Richmond in San Francisco Bay to Hudson, Wisconsin, near the Twin Cities of Minneapolis and St. Paul, Minnesota. We removed the masts in California and maintained/reinstalled them in Wisconsin. We had a lot of volunteer assistance from members of VFP Chapter 27 in the Twin Cities.

We began our presentations off-river in Duluth, Minnesota, where Duluth VFP organized four days of events. We had a press conference with the mayor of Duluth, the mayor of nearby Superior, Wisconsin, and a Minnesota state senator, all of whom spoke eloquently about the urgent need for nuclear disarmament. Project Manager Helen Jaccard and Captain Kiko Johnston-Kitazawa spoke to six high school classes and we made presentations in two churches. We tabled all day at the Riverfront Harvest Festival where we talked with scores of curious and supportive folks. We received good coverage in two newspapers. Donations were generous.

Next we had an event at the Phipps Art Center in Hudson, Wisconsin, attended by VFP members from Wisconsin and Minneapolis, as well as others who had read about the event in the local newspaper. That was followed by two events in Stillwater, Minnesota – one at the library and the other at the riverside park, with live music and food.

We sailed the Golden Rule to St. Paul, Minnesota, and began a series of events in the Twin Cities, sponsored by VFP Chapter 27 and Women Against Military Madness. We had several well-attended events, including another outdoor park event with live music. A terrific and prominent article in the Star Tribune, Minnesota’s largest newspaper, brought many people to visit and tour the Golden Rule peace boat. Helen Jaccard was also interviewed on KFAI, community radio with a large audience. Donations were generous, including a check for $1,000 from an activist with Back from the Brink.

Then we sailed down the Mississippi River to our next stop, Red Wing, Minnesota, where the Golden Rule and crew were the stars of this year’s Peacestock festival. We raised over $1,000 there.

As with several previous events, we were welcomed by local Indigenous leaders with speeches and cultural performances. Continuing to sail down the Mississippi River, we made stops and held events in Wisconsin (Wabasha, Winona, La Crosse), and Iowa (Prairie du Chien, Dubuque, and Clinton). We tabled at the Clinton Community Public Safety Forum. We made side trips by road to Cedar Rapids, Iowa City, Ames and Des Moines. We had enthusiastic participation and good media coverage – radio and TV interviews, and mainstream newspaper articles in several more cities. In Des Moines, we met with religious leaders for lunch, and our evening event, organized by Catholic Peace Ministries, was very well attended. We raised over $1,000. 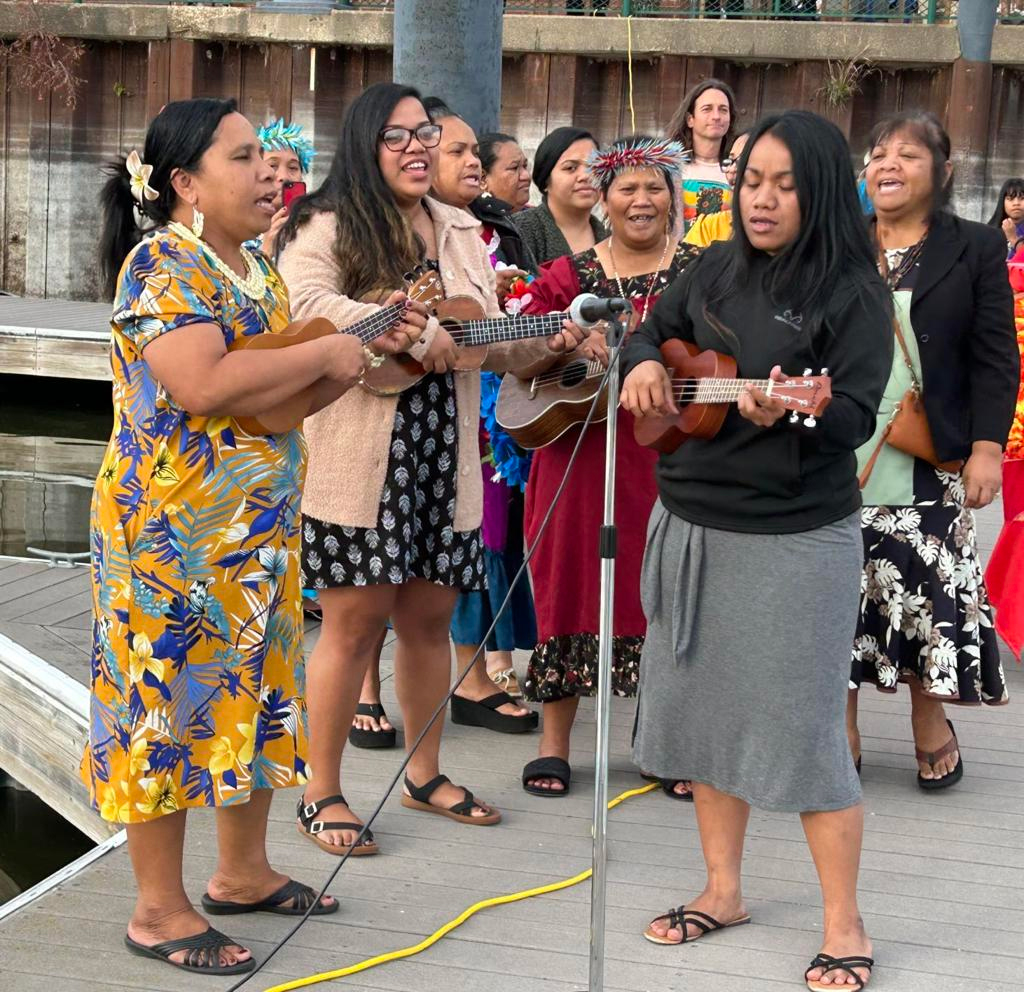 ‘We want to thank them’: Local Marshallese community welcomes the Golden Rule in Dubuque, Iowa. 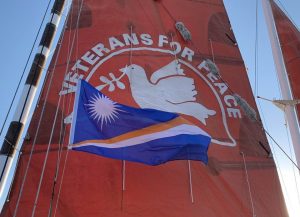 The following morning, the Golden Rule was visited by a group of home-schooled children and parents, who toured the boat, made and flew kites, and colored a coloring-book picture of the Golden Rule, drawn and produced by VFP member Steve Gates.

In the afternoon, many Marshallese joined us for speeches, music, traditional dances and food. Also joining us were the wife and children of David Gale, one of the original 1958 crew, and Sally Willoughby, daughter of another 1958 crew member, George Willoughby.

In the evening, Captain Kiko Johnston-Kitazawa gave a wonderful presentation at the Mississippi River Maritime Museum, well attended and well received. VFP members from several chapters, including a whole gang from the Twin Cities, converged on Dubuque for this wonderful event. We had a great article in the Dubuque daily newspaper and coverage on the local ABC affiliate. Steve Buck of Eureka, California (homeport of the Golden Rule) is our first mate, and has been our skipper on previous occasions. He and Captain Kiko make a great team. We have had about a dozen volunteer crew, about half VFP members, and two boys, 10 and 14 years old (with parental permission and enthusiasm, of course). 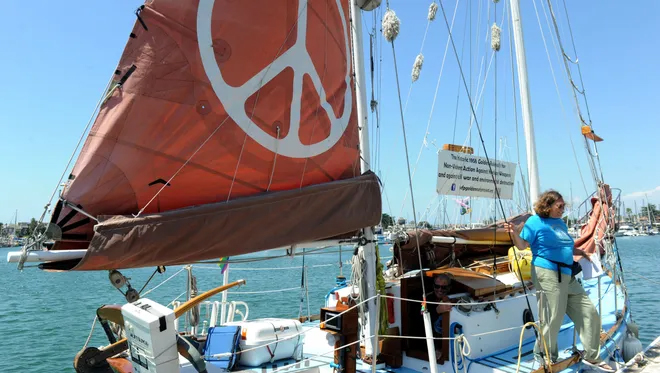 In Davenport, Iowa, we were welcomed by the mayor. Many mayors have welcomed us.

In Des Moines, we received a great proclamation from the mayor, Frank Counie, who happens to be vice president of Mayors for Peace. Pictured (l. to r.) are Mayor Counie, Helen Jaccard, WILPF organizer Kathleen McQuillen, and Gerry Condon. Golden Rule Project Manager Helen Jaccard holds regular Zoom meetings with activists in down-the-river cities, such as St. Louis and Memphis, who are preparing to welcome us in the coming weeks.

The “Great Loop” voyage has certainly started out with a bang, exceeding our expectations. It give us great confidence that we have made the right decision and that all the hard work is well worth the effort. Several VFP members have reported that this is re-energizing their chapters, and giving great visibility to Veterans For Peace. A new VFP chapter may actually be forming in Muscatine, Iowa, as a result of the Golden Rule’s visit!

Our message of nuclear abolition is striking a chord as the war in Ukraine has heightened concern about the possibility of nuclear war. We are in the right place at the right time. The VFP Climate Crisis and Militarism Working Group will be adding a banner to the boat – “US Military Fuels Climate Crisis.” This is a very compatible message.

The Golden Rule Is Sailing for a Nuclear-Free World and a Peaceful, Sustainable Future.

To see the full schedule for the “Great Loop” voyage, please visit our website, vfpgoldenrule.org.

To see photos and videos of our voyage, check out our Facebook page, VFP Golden Rule Project.

To track the Golden Rule’s voyage in real time, go to share.garmin.com/goldenrule

BE THE WIND IN OUR SAILS! Hundreds of small donations keep us going.