Doug Rawlings on Peace, Poetry, and a New Generation of Vets

Photographed by Chip Dillon. Reprinted from Down East Magazine

In the summer of 1970, Doug Rawlings returned to the U.S. from the central highlands of Vietnam, changed by the 13½ months he’d spent attached to an artillery unit there, but not in the ways he’d privately hoped for when he was drafted. He didn’t feel like a Hemingway-esque hero who’d proven his mettle; mostly, he felt angry. He dabbled in anti-war activism, largely around Boston, then got a teaching degree, hoping to redirect his fervor into connecting with kids. He moved to Maine when he and his wife, Judy, started a family, eventually settling on a farmstead in Chesterville. In 1985, Rawlings was one of several cofounders of Veterans for Peace, which today claims thousands of members in 130 chapters worldwide. 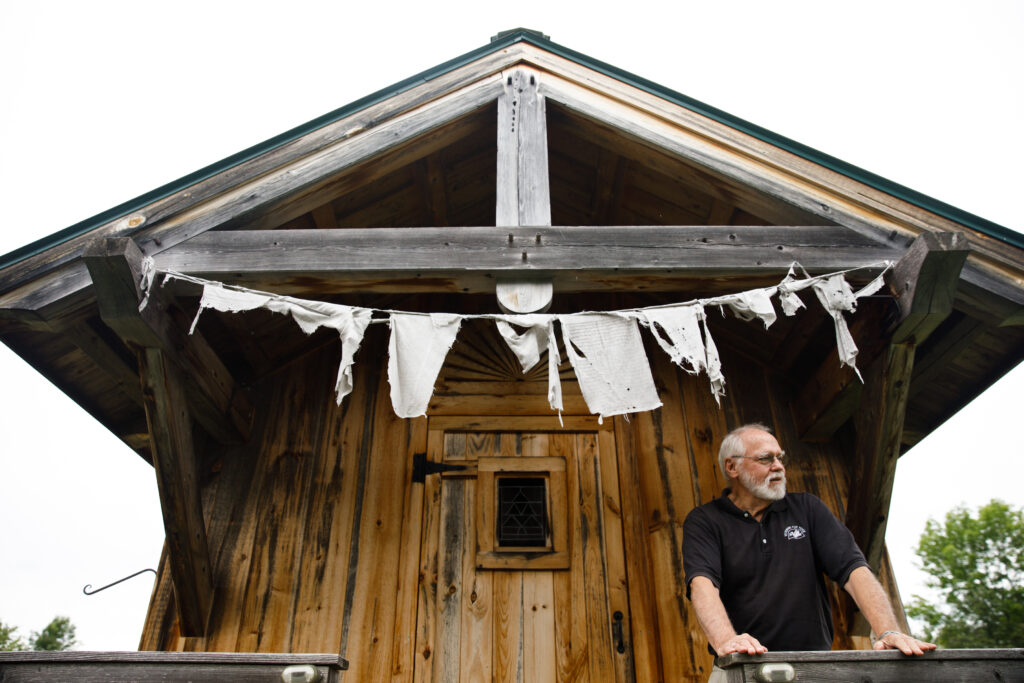 Now retired from the University of Maine Farmington, where he still sometimes teaches a freshman Peace Studies seminar, he’s president of Maine’s Veterans for Peace chapter, an editor at Peace & Planet News, and the author or editor of eight books of poetry, including the just-published Cầu Tre (Bamboo Bridge), a collaboration with poet and Vietnam War refugee Teresa Mei Chuc.

What motivated your activism after returning from Vietnam?

What’s the core of Veterans for Peace’s mission?

We have an aspiration to abolish war as an instrument of national policy. We realize we have a long way to go to get there. People say, oh, that’s a Pollyannaish idea. I like to point out it’s what Albert Einstein wanted. After World War I, he attended disarmament conventions where leaders wanted to designate which weapons were appropriate and so on. They didn’t want to stop war — what they wanted to do was make war more palatable. And Einstein got so angry. What he said was, there’s no way — we have to abolish war. 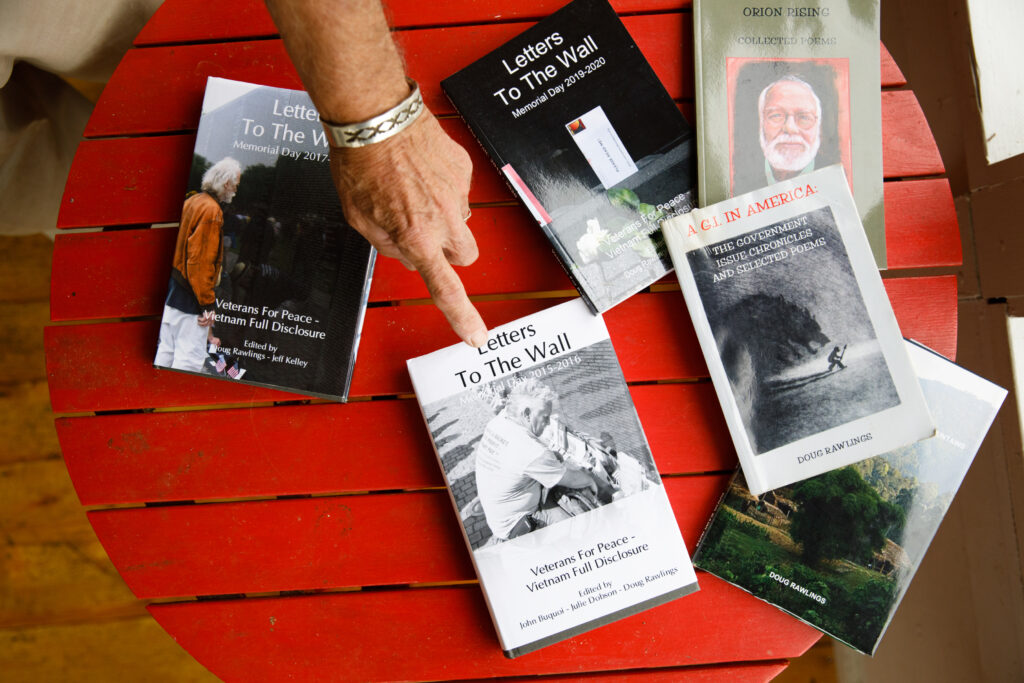 “I started this project of writing letters to the Vietnam Veterans Memorial, and three of the books I’ve worked on collect 500 of these letters. Every Memorial Day we go down to Washington and set up a monument with a big bell on it and a door with wires around it. People visiting the wall write messages, then we’ll hang them from the wires and they’ll go in and ring the bell. Visiting the wall is incredibly moving, but it’s a passive experience. Here’s something you can actively do, and we’ll honor your words.”

The organization was founded ten years after the fall of Saigon, so how much was the Vietnam experience the impetus?

At the outset, in the ’80s, it was really focused on Central America. And of course, everyone involved had our own personal baggage [from Vietnam], but we sat down and set up some driving principals, one of which was that we were very clear about being nonviolent. People to this day will ask, “You were a veteran, so how come you’re for nonviolence?” Mainly because that’s the only way we can ever resolve these conflicts and because we’ve seen violence firsthand. We’re not antimilitary — some people in our organization are absolute pacifists, but most are not. We just want to be more reasonable, set up a defensive military, and address war’s underlying causes: the war industry, the munitions industry, the people who are invested in war. So we knew back then that even if we ended support for the contras, it wasn’t the end of our work. We just couldn’t see younger generations going off and doing what we had been doing.

How do older, Vietnam-era members work alongside vets of more recent wars — in Iraq, in Afghanistan? Can you help them find solace and a voice?

People to this day will ask, “You were a veteran, so how come you’re for nonviolence?” Mainly because that’s the only way we can ever resolve these conflicts.

It’s tough sometimes. They don’t want to be talked down to. They’ve got their own stories to tell, and who are we? Our thing is, we were in demonstrations before you guys were even born. And don’t think the baggage you carry from Iraq and Afghanistan is much different than the baggage we carry, so why can’t you listen to us? They’re saying, Vietnam is old news, and we need to do our thing. And I’m torn — I can see where they’re coming from.

I don’t want to pretend it’s mystical, but in a sense it is — I don’t know where a poem comes from. The last one, I just woke up early and looked out at this apple tree. It’s written for Afghan War vets, and the opening stanza is, “Stop struggling with the eyes of strangers — / try directing your thousand-yard stares / toward the apple tree by the stone wall / in the early morning light.” Then I go through all the other senses — smell, hearing, and so on — and it ends with this notion of: Let this stuff go. Come to your senses, connect with the natural world, and you can get through this. I mean, I try not to preach. When I moved up here, I didn’t do it purposefully, moving to the country to get away from the war. But in retrospect, that’s exactly what I did. 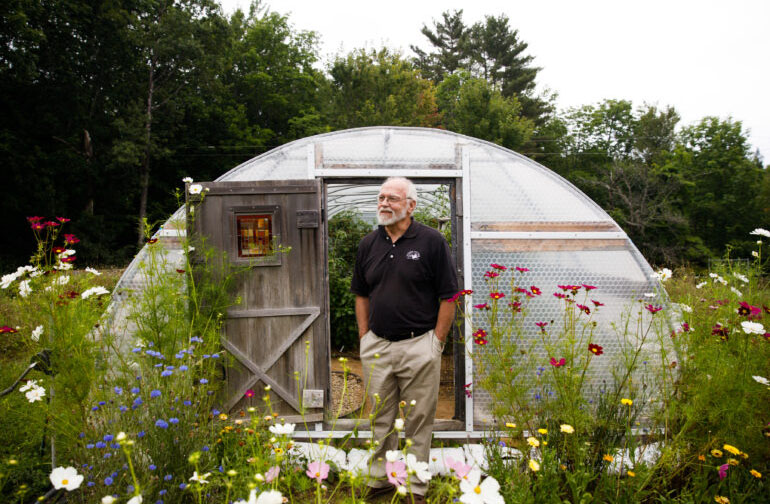 I don’t want to pretend it’s mystical, but in a sense it is — I don’t know where a poem comes from.

Brian Kevin is a magazine writer based in Maine and the editor in chief of Down East magazine. His work has appeared in The New York Times, Outside, Audubon, Sierra, Men’s Journal, Travel + Leisure, Mother Jones, High Country News, and other publications. He is the author of The Footloose American: Following the Hunter S. Thompson Trail Across South America, which won the Maine Literary Award for Nonfiction.