Bury My Heart with Leonard Peltier 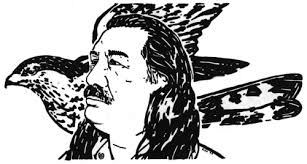 American Indian Movement leader, Leonard Peltier, at 77 years of age, came down with Covid-19 this weekend. Upon hearing this, I broke down and cried. An innocent man, locked up behind bars for 44 years, Peltier is now America’s longest-held political prisoner. He suffers in prison tonight even though James Reynolds, one of the key federal prosecutors who sent Peltier off to life in prison in 1977, has written to President Biden and confessed to his role in the lies, deceit, racism and fake evidence that together resulted in locking up our country’s most well-known Native American civil rights leader. Just as South Africa imprisoned for more than 27 years its leading voice for freedom, Nelson Mandela, so too have we done the same to a leading voice and freedom fighter for the indigenous people of America. That’s not just me saying this. That’s Amnesty International saying it. They placed him on their political prisoner list years ago and continue to demand his release.

And it’s not just Amnesty leading the way. It’s the Pope who has demanded Leonard Peltier’s release. It’s the Dalai Lama, Jesse Jackson, and the President Pro-Tempore of the US Senate, Sen. Patrick Leahy. Before their deaths, Nelson Mandela, Mother Theresa and Bishop Desmond Tutu pleaded with the United States to free Leonard Peltier. A worldwide movement of millions have seen their demands fall on deaf ears.

The time has come for our President to act.
And now the calls for Peltier to be granted clemency in DC have grown on Capitol Hill. Senator Brian Schatz (D-HI), the head of the Senate committee who oversees the Bureau of Indian Affairs, has also demanded Peltier be given his freedom. Numerous House Democrats have also written to Biden.

The time has come for our President to act; the same President who appointed the first-ever Native American cabinet member last year and who halted the building of the Keystone pipeline across Native lands. Surely Mr. Biden is capable of an urgent act of compassion for Leonard Peltier — especially considering that the prosecutor who put him away in 1977 now says Peltier is innocent, and that his US Attorney’s office corrupted the evidence to make sure Peltier didn’t get a fair trial. Why is this victim of our judicial system still in prison? And now he is sick with Covid.

For months Peltier has begged to get a Covid booster shot. Prison officials refused. The fact that he now has COVID-19 is a form of torture. A shame hangs over all of us. Should he now die, are we all not complicit in taking his life?

President Biden, let Leonard Peltier go. This is a gross injustice. You can end it. Reach deep into your Catholic faith, read what the Pope has begged you to do, and then do the right thing.

The way we do mass incarceration in the US is abominable. And Leonard Peltier is not the only political prisoner we have locked up. We have millions of Black and brown and poor people tonight in prison or on parole and probation — in large part because they are Black and brown and poor. THAT is a political act on our part. Corporate criminals and Trump run free. The damage they have done to so many Americans and people around the world must be dealt with.

This larger issue is one we MUST take on. For today, please join me in contacting the following to show them how many millions of us demand that Leonard Peltier has suffered enough and should be free:

Secretary of the Interior Deb Haaland

I’ll end with the final verse from the epic poem “American Names“ by Stephen Vincent Benet:

PS. Also — watch the brilliant 1992 documentary by Michael Apted and Robert Redford about the framing of Leonard Peltier— “Incident at Oglala”

Michael Moore is a documentary filmmaker, writer, citizen, and podcaster (Rumble with Michael Moore). His films include Bowling for Columbine, Fahrenheit 9/11, Sicko, and Where to Invade Next. Sign up for his regular newsletters at MichaelMoore.com