A veteran who served two deployments to Afghanistan with the 2nd Army Ranger Battalion reflects on the socialist politics and practice that will be needed to stop future wars.

The first thing I thought of when I watched the U.S. military’s C-17 flee Bagram air base in Kabul, with hundreds of Afghans desperately trying to leave, as many clung to the planes’ landing gear, was George W. Bush standing on the pile of rubble at Ground Zero in Manhattan on September 14, 2001. Fiddling with a bullhorn, on an overcast day, in his tan-colored windbreaker, he exclaimed, “The nation stands with the good people of New York City and New Jersey and Connecticut as we mourn the loss of thousands of our citizens.”

A rescue worker interrupted, “I can’t hear you!”

On September 10, 2001, I was a recent college grad. I had a mound of student debt. I didn’t want to work in a cubicle to pay it back. I was volunteering in a nursing home in Santa Fe, New Mexico, working as a waiter in a sushi restaurant, and looking to find my place in the world.

On the 11th, I watched the planes hit the Twin Towers. I was sitting with a 90-year-old woman named Ellie, who never spoke. Her daughter told me that Ellie’s husband was a White House correspondent for NBC during the Kennedy administration. He was on Air Force One when LBJ was sworn into office with a bloodied Jackie Kennedy by his side. As Ellie and I watched the towers crumble together, she finally mumbled her first words to me. “I am so sad,” she said as she gripped my hand.

In the days following, I felt confusion and restlessness. Bush gave his little bullhorn speech on the 14th. I watched that at the nursing home, too. The Yankees canceled baseball games and then had a moving ceremony at Yankee Stadium on the 25th that honored those who died on 9/11. Again, I watched from the nursing home. Every minute during 9/11 and the weeks following tugged at my heart and stirred my desire to do something real with my life and try to prevent a 9/11-style attack from ever happening again.

However, I did not have a coherent worldview at the time. I didn’t understand power structures. I also didn’t know if I was a kid or an adult. I was guided by emotion more than anything, and that made me vulnerable to rallying cries in the wake of tragedy—rallying cries made through bullhorns by babbling idiots like George W. Bush. I thought the United States was the best country in the world and that its leaders truly cared about freedom and democracy.

I signed up for the military not long after G. W.’s speech. The military felt dangerous but also safe. There was order in the military. It seemed to offer a coherent worldview that revolved around solidarity among fellow soldiers and fighting for freedom. The military represented honor and purpose.

I became a socialist a few years after leaving the military as a war resister. The sense of betrayal and disgust by what I saw and did in Afghanistan—where I spent a great deal of time at Bagram airbase—led me to reject the idea that the United States is a force for good in the world. I began reading about other crimes the U.S. government committed throughout history. I met people who also knew about those crimes. There was a sense of solidarity in the collective determination to expose and resist future wrongdoings committed by those in power in the United States and their allies abroad.

Since the collapse of the U.S.-backed Afghan government, a lot of people have been pointing fingers at their least favorite politicians, trying to hold that person responsible for the 20-year, trillion-dollar, thousands-of-lives-lost war in Afghanistan. Socialists taught me that one person is never solely responsible for such epic crimes. It is the conspiracy in plain sight carried out by the ruling class that causes such chaos and destruction.

Beyond asking how we are going to place the millions of Afghan refugees in homes in the United States and elsewhere, the next most relevant topic is: How do we prevent a war like Afghanistan from ever happening again? So I’ll stick to that.
I wish I knew about socialist politics before I signed up for the military. I wish I heard a rallying cry through a bullhorn that opposed imperialist war rather than advocated it.

There have been hundreds of thousands of recent high school or college grads who signed up for the military for reasons similar to mine. Kids who were lost. Kids who had no sense of community. Kids who were in debt or were just plain poor.

As a socialist, I know that the only real weapon the poor and working class have is solidarity, best demonstrated through an organized, collective agreement to withhold our labor. If we want to prevent a disaster such as the war in Afghanistan from ever happening again there needs to be a plan to reach all those that are signing up for the military and build alternatives for them. How do we interrupt that moment when young people make the decision to work for a state that advocates wars that benefit a handful or rich and powerful people at the great expense of the rest of us? To use the now almost cliched line, what if someone threw a war and no one showed up?

Shouldn’t this be the question those committed to a better world ask themselves every day? How do we win over these kids before the U.S. ruling class does? How do we share a worldview that communicates a way of fighting oppression and exploitation rather than reinforcing it? How do we interrupt and eventually destroy the workflow of the ruling class? There are a lot of complicated answers to these questions, but maybe we should focus on the basics. There is a real power in getting out and talking to people face to face. There is power in showing young people an alternative and then helping them fight for it. 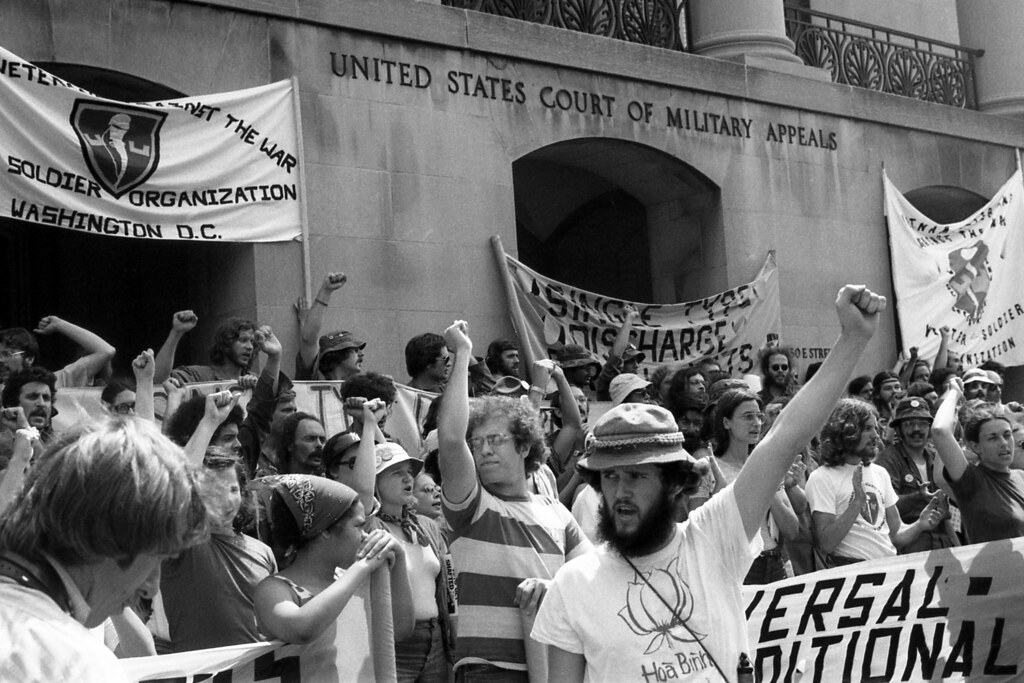 A legacy of resistance: Vietnam Veterans Against the War (1974). Photo: Washington Area Spark

I wish I knew about socialist politics before I signed up for the military. I wish I heard a rallying cry through a bullhorn that opposed imperialist war rather than advocated it. I wish I had the vocabulary that would have allowed me to predict the outcome of the Afghanistan war as so many socialists were able to do back in 2001.

I speak to high school and college-age students now. I feel overwhelmed by all those I’m not reaching. I constantly ask myself if it’s all in vain. The US military is working with a billion-dollar-a-year advertising budget. More than 10,000 military recruiters stalk the hallways of high schools across the country, targeting those with the least amount of options after graduation. Black and brown people are disproportionately recruited.

One day there is a good chance I will be sitting in a retirement home like Ellie. Will I watch future world events unfold in the same tragic way? Can there be a victory for ordinary people in a real and sustained way? Can we win reparations for all those who have been victimized by the ruling class? Will I see it in my lifetime?

I know one thing: bottom-up socialism, communicated one conversation at a time, and then collectively struggled for is the only thing that can get in the way of another major war, the ongoing climate catastrophe, and increased exploitation and oppression in the world. So I keep at it. I keep going to the schools trying to communicate the benefits of socialism and the horrors of capitalism and imperialism.

But there are days like August 16 in Kabul that make me despair and want to give up. Over my desk, I have a taped quote from Howard Zinn that I read from time to time. It keeps me going:

To be hopeful in bad times is not just foolishly romantic. It is based on the fact that human history is a history not only of cruelty but also of compassion, sacrifice, courage, kindness. What we choose to emphasize in this complex history will determine our lives. If we see only the worst, it destroys our capacity to do something. If we remember those times and places—and there are so many—where people have behaved magnificently, this gives us the energy to act, and at least the possibility of sending this spinning top of a world in a different direction. And if we do act, in however small a way, we don’t have to wait for some grand utopian future. The future is an infinite succession of presents, and to live now as we think human beings should live, in defiance of all that is bad around us, is itself a marvelous victory.

Another world is possible. It has to be.

Rory walked across the United States for the Pat Tillman Foundation in 2008–2009, following two deployments to Afghanistan with the 2nd Army Ranger Battalion. He is a war resister, and writer living in Chicago, Illinois. Haymarket Books published his book Worth Fighting For: An Army Ranger’s Journey Out of the Military and Across America in November 2014. His writing has appeared in The Guardian, The Nation, Mother Jones, Salon, Truthout, Common Dreams, TomDispatch, Peace & Planet News, and others. He is a proud member of Veterans For Peace.