Recent incendiary exposés of Monsanto products—-scientifically proven in court to cause cancers in workers and homeowners who have used them—-have caused stocks to plunge, and new owner, German pharmaceutical corporation Bayer, to no longer want to use the brand name.  As of June, 2020 Bayer has agreed to pay nearly $11 Billion to settle 100,000 pending lawsuits filed against Monsanto for illnesses allegedly caused by the weed killer RoundUp.  As with Monsanto, Bayer has admitted to no wrong-doing, and their products will continue to have no warning labels.  However, three resolved suits in California alone, which ruled in favor of the plaintiffs, resulted in multi-million dollar settlements in 2018 and ’19, which Bayer has challenged and will continue to challenge.

Another major law suit against Monsanto, and 13 other chemical multinationals, is about to be decided in a French court.  Ten years in the making, the suit is being brought by Tran To Nga, a 78-year old Viet Namese French citizen who worked as a journalist and activist during the war in Viet Nam.  She alleges that exposure to the defoliant Agent Orange caused her multiple heath problems which were passed on to her children and grandchildren—ailments for which American veterans of that war are compensated.

All this is quite a corporate burden for Bayer to acquire, along with the $62.5 billion price tag paid in 2018 to merge the two chemical giants.  However, both these giants have major war crimes, from World War II to Viet Nam, hidden in their pasts. 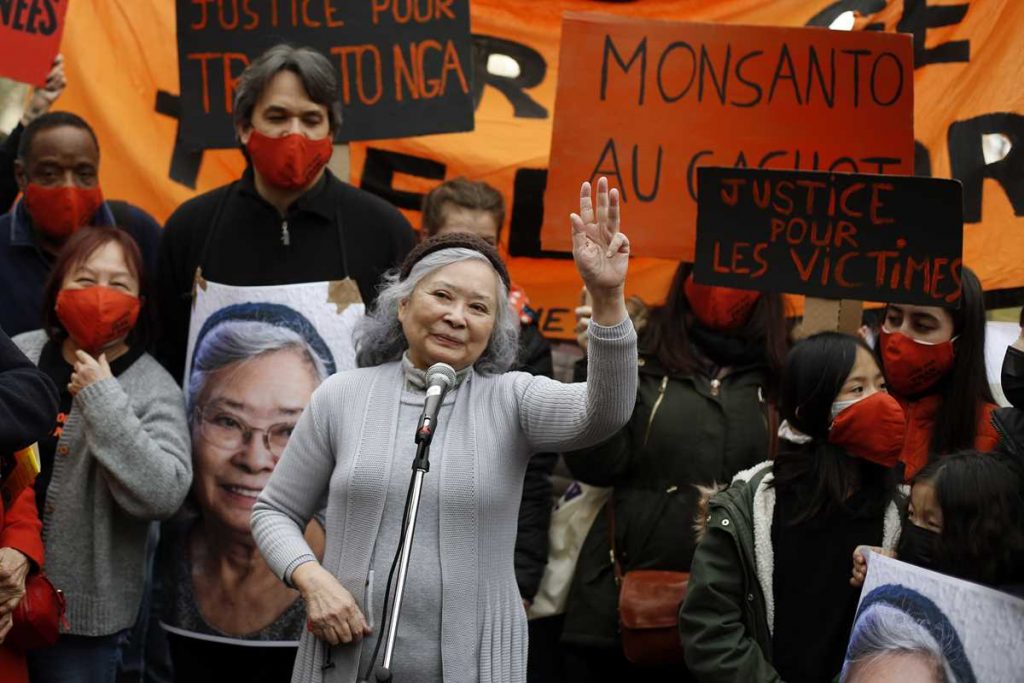 Tran To Nga, who alleges that exposure to the defoliant Agent Orange caused her multiple heath problems that were passed on to her children and grandchildren.

America’s war on Indochina was one of the largest chemical poisonings of entire countries in the history of the world—the use of the defoliant Agent Orange (and several other deadly chemicals) on the jungles and food crops of Viet Nam, Cambodia and Laos.  The damage to humans and the ecosystem continues today.

The herbicide called Agent Orange was sprayed for 10 years (1961-71) to the tune of at least 20 million gallons. It contained Dioxin, the most toxic substance known to science. But Dioxin was not a necessary ingredient in Agent Orange, manufactured by Monsanto, Dow and 36 other companies. Higher temperatures, which were used to shorten the reaction time, produced the Dioxin; a longer processing time at a lower temperature would have kept it out.  However that would have cost a small amount of the profits, so the contaminant was left in and Dioxin’s gene-warping destruction went on to create havoc in humans, animals and the environment.

Tens of thousands of American veterans and hundreds of thousands of Viet Namese have been sickened and died from Agent Orange (AO) poisoning in the decades since, according to the International Red Cross. In 1984 a class action suit by 20,000 American veterans was settled against the chemical corporations, with an award of $180 million, on the condition that: no wrong-doing was admitted and no future legal action would be allowed. Medical care and compensation for these vets is now paid by the American tax payer through the VA (Veterans Administration). That price tag for AO illnesses alone amounts to many billions of dollars—a shift of the bill from private to public.  However, since Dioxin is an Epigenetic substance, severe birth defects, cancers and many other illnesses have passed to future generations—now showing up in the Fourth Generation!  Since the war’s end 46 years ago, an estimated four million Viet Namese are still afflicted today, including newborn babies.

A 2004 suit brought by members of the Viet Nam Association of Victims of Agent Orange (VAVA) was rejected and appealed twice, and ultimately quashed in 2009. The pro bono American lawyers in that attempt are now working with Mme. Nga in France. A bill in the U.S. House of Representatives called The Victims of Agent Orange Relief Act continues to be reintroduced over several years, slowly gathering sponsors, but in reality serving as a reminder of enduring responsibilities. Some former American bases in Viet Nam have been cleaned of toxins with USAID money—a slow and halting process. To date, only military veterans from the U.S., Australia, and South Korea have won compensation for the after-effects of the chemical; the Viet Namese victims have never been acknowledged nor compensated.

Yet another damning piece of history—this one from World War II of 75 years ago—exposes yet another mass chemical poisoning. It concerns the German-owned Bayer, Monsanto’s new merger partner, and its collaboration with Nazi death camps, as documented and verified in the Nuremberg, Germany, War Crimes Tribunals.

The following is taken word for word from documented testimony at a Nuremberg Tribunal: “During the war, Bayer wrote the commander of Auschwitz concentration camp to inquire about “purchasing” 150 women for experiments with sleep-inducing drugs.” After compromising on the price, the actual letter from Bayer said:

“We received your reply. Select 150 women in the best possible state of health, and as soon as you inform us that you are ready, we will fetch them. …” And later: “Despite their emaciated condition they were acceptable … . We will keep you informed on the progress of the experiments.” And again later: “The experiments were concluded. All persons died. We will soon get in touch with you regarding a new shipment.”

In the summer of 2018, the first of three lawsuits against Monsanto by separate individuals was mounted by Dewayne “Lee” Johnson, a sickened school grounds keeper in California, who routinely used RoundUp weed killer on his job. RoundUp contains not Dioxin but Glyphosate. However, the voir dire phase (pre-screening of potential jurors in the jury pool) of that first case is extremely instructive, and makes the link to Agent Orange/Dioxin.

“Juror #4,” Robert Howard of San Francisco, who served during the entire 6-week trial of 2018, tells of a prospective juror being asked by a bank of Monsanto lawyers, “What, if anything, have you heard previously about Monsanto?”  Answer: “Didn’t Monsanto make Agent Orange in the Viet Nam War?”  “Strike, your honor!” cried the three Monsanto lawyers in unison as they literally leapt as one out of their seats. That comment was promptly struck from the court record, and the possible juror removed from the jury list. And no wonder, as Dioxin’s toxicity in AO is estimated to be around 13 times that of herbicides in civilian use such as glyphosate.

However, despite all Monsanto’s efforts, the 12 members of the jury, including Robert Howard, found Monsanto guilty.  Coincidentally, the grounds keeper received an award of $289 million in compensatory and punitive damages on August 10, 2018—the annual International Agent Orange Day. Bayer appealed and three months later Johnson’s award was reduced to $78 million. A second corporate appeal in July, 2020 reduced damages to $20.5 million.

Bayer, like Monsanto before, has continued to assert that glyphosate is safe, exactly like Agent Orange/Dioxin was “safe” to use in South East Asia.
It is important to acknowledge that the findings of the jury members of corporate malfeasance and responsibility are not to make a dying man rich. They are intended to make a runaway behemoth pay attention and change its products and labeling so as not to continue to wreak havoc on the environment and yet more humans. Similarly, Mme. Nga in France is calling for recognition and compensation for all victims, in particular the millions of Viet Namese. The several European NGOs (non-governmental organizations) that back her suit also hope it will bolster a drive to pressure states to recognize “ecocide” as a war crime—almost 20% of Viet Nam’s forests were devastated by the chemical. While these cases continue to be appealed in a truly David v Goliath situation, the American plaintiffs have yet to receive a penny.

Plaintiff Lee Johnson, the school grounds keeper, is a 46-year-old African American father of three with terminal cancer.  The weed killer glyphosate, combined with other ingredients, was scientifically proven in court in all three California cases to be a carcinogen. Again, there are no warning labels on RoundUp. As of this writing Johnson is still alive despite suffering from non-Hodgkin’s lymphoma, a blood cancer. His courage to challenge a corporate giant, along with a progressive law firm, is truly groundbreaking. Lee has made a 4-minute music video which can be found at: ANTLEE “Not Your Time.”  It is a poignant eye opener, showing the damage to his body, but not his spirit.

Bayer, like Monsanto before, has continued to assert that glyphosate is safe, exactly like Agent Orange/Dioxin was “safe” to use in South East Asia on our military and their civilians.  According to The Guardian of London, among other investigative reports, Monsanto created sophisticated ghostwritten articles and supplied environmental regulators with “bad science.” As was presented in court, attorneys for the plaintiffs called attention to Monsanto’s alleged efforts to actively suppress science that suggested the carcinogenic properties of glyphosate. In addition, a “multi-pronged” strategy to exert pressure on journalists, scientists, and non-profit citizen protection groups was carried out. So the legal wrangling continues, and former juror Robert Howard has now written a book on his life-changing experience as a juror.

Now impacting the global populace, the multinational agribusiness conglomerate was one of the first to embrace the production of food from genetically modified organisms (GMOs)—problematical for human and planetary health to say the least. All in all, the hidden histories of both of these corporate giants in at least two wars of the last century, and their criminal actions today, should alert the world as to their roles and products now.

This article has been translated into French and Viet Namese.

Nadya Williams is a free-lance journalist; active Associate Member of Veterans For Peace since 2003; on the board of the Viet Nam Chapter 160 of VFP and Director of Communication for the San Francisco Chapter 69.