It was 15 degrees Fahrenheit in New York City on Friday morning, January 21, 2022, the day of the Join the Treaty Rally and March and most New Yorkers were huddled inside. But Owl of the Ramapough Mountain Indians had already walked nine hours down from Mahwah, New Jersey, to meet up with Buddhist nun Jun Yusada of the Grafton Peace Pagoda to walk to the NYC Public Library in midtown Manhattan for the rally. The Earth Flag Brigade was on its way carrying banners with the iconic image of Planet Earth from space. Tarak Kauff of the NYC Veterans For Peace was busy attaching PVC poles to a huge 5-by-12-foot banner of a fiery yellow and red nuclear mushroom cloud emblazoned with the words “Nuclear Weapons Are Illegal.” The Join the Treaty Rally and March was on.

Antinuclear activists took over the steps of New York’s Main Library between the two lion statues, Patience and Fortitude, to celebrate the first anniversary of the entry into force of the Treaty on the Prohibition of Nuclear Weapons (TPNW). Their mission? To send a clear message to the U.S. government to join the rest of the world and sign the treaty.

The official birthday of the treaty is January 22, 2021, 90 days after the required number of 50 states officially ratified the treaty. For the treaty’s first birthday, actions, events, and celebrations took place around the globe and across the United States.

This treaty, the TPNW, finally establishes a categorical ban on nuclear weapons under international law. Now, nuclear weapons are subject to a comprehensive ban. Nations are prohibited from developing, testing, producing, manufacturing, transferring, possessing, stockpiling, using or threatening to use nuclear weapons, or allowing nuclear weapons to be stationed on their territory. It also prohibits nations from assisting, encouraging, or inducing anyone to engage in any of those activities. A nation that possesses or hosts nuclear weapons may join the treaty, so long as it agrees to destroy the weapons or remove them from its territory in accordance with a legally binding, time-bound plan. Finally, nations are obliged to provide assistance to all victims of the use and testing of nuclear weapons. The treaty was negotiated at the United Nations headquarters in New York in March, June, and July 2017, with the participation of more than 135 nations. It is permanent in nature and will be legally binding on those nations that join it.

It is not a small matter for a U.N. treaty to enter into force and it doesn’t happen without a great deal of hard work, and, yes, Patience and Fortitude. The nuclear weapons states, in particular the United States, are not pleased that the rest of the world, outside their nuclear “umbrella,” is trying to change the rules that the great powers wrote and that the great powers feel they own. The United States has put pressure on other countries to ignore the efforts to negotiate, sign, and especially to ratify the TPNW.

It took courage for the countries, which are mostly in the Global South, to stand up to the United States and the other nuclear powers and sign and then ratify the TPNW. It also took the support of the nuclear disarmament movement in civil society. For that encouragement, the International Campaign to Abolish Nuclear Weapons (ICAN) won the Nobel Peace Prize in 2017.

Many New Yorkers are grateful to the countries that ratified the TPNW. After all, New York City is where the Manhattan Project began, the program that designed the first nuclear weapon. Many New Yorkers feel a moral obligation to work to eliminate the horrific weapon that was designed on their turf. New York is also the home of the United Nations and its City Countil recently proclaimed it a Nuclear Weapons-Free Zone in support of the TPNW.

As an expression of gratitude to the TPNW state parties, members of Peace Action NYS, Manhattan Project for a Nuclear Free World, and other organizations started the Roses to Missions project, now endorsed by more than 40 organizations. Last January, when the treaty first went into force, they delivered roses and thank-you certificates to 51 Permanent Missions to the United Nations. This January 19, they delivered another batch of roses and thank-you certificates to another eight missions: Cambodia, Chile, Comoros, Guinea-Bissau, Mongolia, Peru, Philippines, and Seychelles. 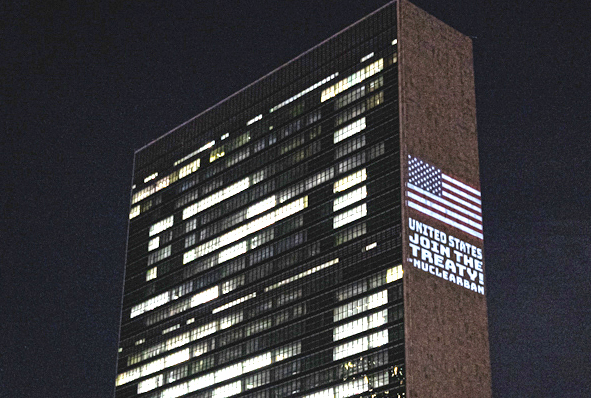 That night illuminations were projected onto the United Nations building, calling out each of the nine nuclear-armed nations, in the order in which each country developed its nuclear capability, to join the TPNW. The messages read, “Nuclear Weapons Are Illegal, United States Join the Treaty! #nuclearban” followed by Russia, the UK, France, China, Israel, India, Pakistan, and North Korea; and were conveyed in the corresponding country-specific, lingua franca to send a direct message to their leaders—join the TPNW to save the world from nuclear annihilation.

The next objective of the Roses to Mission project was to deliver a strong message to the United States that they must also join the TPNW. For that, the rally in front of the New York Public Library and a march to the U.S. Mission in front of the United Nations was planned. Speakers included NYCAN member and filmmaker Brendan Fay; Peace Action NYS activist Joanne Robinson; Mari Inoue, co-founding member of Manhattan Project for a Nuclear Free World; Emma Pike, peace educator with Reverse the Trend; Casey Brookes Richardson, youth activist with Nuclear Age Peace Foundation and Reverse the Trend; Carlos of the Earth Flag Brigade; Owl of Ramapough Mountain Indians; Jun Yusada of the Grafton Peace Pagoda; Lars Swan of the Poor People’s Campaign, Dr. Kathleen Sullivan of Hibakusha Stories and NYCAN, and Seth Shelden of ICAN. Music was performed by Anthony Donovan and Bud Courtney of the Dirty Rotten System, Sally Campbell of Morningside Quakers, and the Raging Grannies.

Brendan Fay addresses activists on the steps of the Library Jan. 21.