In a time of COVID.
In a time of World Pollution.
In a time of Massive Climate Change.
In a time of War after War after War.
In a time of great poverty.
In a time of great homelessness.
In a time of great greed.
Martin Luther King Jr., do you have something to say?
“Yes I do”
“I knew that America would never invest the necessary funds
or energies in rehabilitation of its poor so long as adventures
like Viet Nam continued to draw men and skills and money like
some demonic destructive suction tube.” April 4, 1967
In a time of calling Putin another Hitler.
Even Michael Moore is demonizing Putin.
What about Iraq Michael?
What about Afghanistan Michael?
Dr. King, I understand that you have a couple of other things to say…
“Yes I do.”
“A nation that continues year after year to spend more money on
military defense than on programs of social uplift is approaching
spiritual death.” April 4, 1967
“And, I will close with this statement.”
“The greatest purveyor of violence in the world today is my own government.”
It is amazing how censorship and propaganda has erased the memory of most
American citizens.
Putin is the devil.
What about the 500,000 Iraqi children who were killed as a result of U.S. weapons?
Does the United States realize Russia has nuclear weapons?
From Afghanistan to Ukraine in the blink of an eye.
Dresden James, do you have something to say as a final word?
“Yes I do.”
“When a well-package web of lies has been sold gradually to the masses
over generations, the truth will seem utterly preposterous and its speaker
a raving lunatic.”
American corporations can’t make a killing off of peace.
The U.S. Empire can’t survive without a war economy.
“Putin is another Hitler!”

The Greatest Purveyor of Violence Then and Now 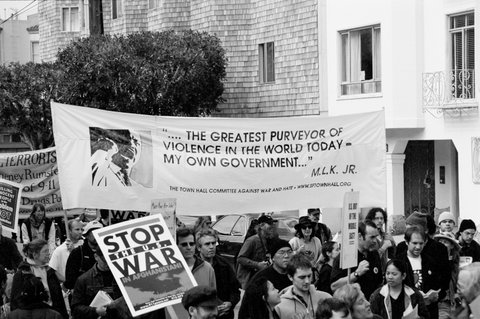 Antiwar demonstration in San Francisco in 2002. Martin Luther King Jr. made this statement during a speech he gave about Vietnam on April 4, 1967, at Riverside Church in New York City. Photo: Mike Hastie

When Martin Luther King Jr. made this statement in his speech, “The greatest purveyor of violence in the world today if my own government,” he sealed his fate as far as the corporate and political elites were concerned in America. Exactly one year later he was assassinated in Memphis, Tennessee. Martin Luther King Jr. was interfering with the U.S. war economy, and it was time for him to go. His profound truth would still startle 95% of the American people today. Those 95% are the fish under water, who have absolutely no idea there is another world above the water. It is simply incomprehensible to them. Their core belief system would not allow this new information to penetrate their realm of consciousness. They would react to it like a hot flame. It would cause an absolute conflict in their thinking, a violation of their sense of moral order. While our churches pray for peace, the U.S. economy worships war. There is no gray area with people who live in a black-and-white world. Their world has to be predictable, and the idea of the United States being the most violent country in the world is absolutely preposterous.

For hundreds of thousands of Vietnam veterans, Martin Luther King Jr.’s profound truth would be the mind-altering knowledge that would change their lives forever. They came home to a country that no long existed in the eyes of their childhood. They were permanently transformed and catapulted into another world that did not make any sense. For me, it was like being in an emotional whiteout with no sense of direction. All of my fence posts for making my way through life did not exist anymore. I felt like a small child who was lost from his parents. There were no parameters for safety. I felt doomed, because there was no one I could talk to about a country I did not recognize anymore. I felt alienated from my own family, and my old friends who did not go to Vietnam. I got into arguments about the anger I felt toward my government, and the senselessness of the world I now lived in. Nothing made any sense anymore. My rage was directed inwardly about the emotional trauma I had concerning betrayal, though I could not articulate that violation to my soul when I first got back from Vietnam. I felt used like a pawn in a deadly chess game, so corporate America could make a financial killing in Vietnam.

I did not serve in Vietnam for the cause of freedom and democracy, I served Big Business in America for the cause of profit. My government looked like a bunch of clowns to me now. Their senseless sincerity was despicable. Their leadership had nothing to do with common people. As far as I was concerned, they just represented the rich who were controlling everything. My trust in the system that had controlled my life before I went to Vietnam, was now gone. This was the new world I was now living in. Over the course of several years, I had acquired a precision bullshit detector that now became my new guiding light through life, which has sustained me since I came back from Vietnam. When the political elite speak, and try to tell me we live in a democracy, my bullshit detector alarm goes off at precisely the right time. Several years after I returned from Vietnam, I finally realized I was the enemy in Vietnam. This is the reality that the American people will never understand, because it would completely maul their safeguarded belief system about who they think they are.

The U.S. government committed mass murder in Vietnam. That is the new reality I and countless Vietnam veterans have about America, a world that is unbelievable in the eyes of the vast majority of people living in this country. For most people, this truth is simply too mind altering to comprehend. They are the fish that swim under water, and are schooled to be obedient to the world they live in. I cannot live in this world, nor can countless Vietnam veterans I have met in my life over the past 45 years. That is the voice I heard when I jumped up and out of the water: “Since the end of World War II, the U.S. government has bombed 29 countries.” The U.S. government is a Global Empire, it is not some benevolent charity spreading peace and freedom throughout the world. The Vietnam Veterans Memorial in Washington, D.C., is 150 yards long. On this monument are the names of 58,000 Americans who were killed in Vietnam. If the same density of names were put on a similar wall for the Vietnamese people, that monument would be nine miles long! Noam Chomsky, world renowned linguist and professor at MIT, once stated, “The entire Vietnam War was an atrocity, the My Lai Massacre was just an afterthought.”

Mike Hastie was an Army medic during the Vietnam War. He has since returned to Vietnam three times. He is a photographer, poet, and writer and a lifetime member of Veterans For Peace.