Will Julian Assange Be Extradited?

Reposted from Inside Story, AlJazerra

A profound interview with Max Blumenthal, Nils Melzer and Kristinn Harfnsson on the latest in the persecution and extralegal prosecution of Julian Assange. 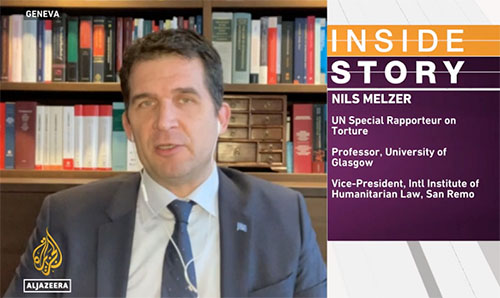 The founder of the Wikileaks website has sought sanctuary in London for years.

A “travesty of justice” is how Amnesty International describes it.

She says the founder of the WikiLeaks website is planning a last-gasp appeal to the United Kingdom’s highest court to stop extradition to the United States.

The UK’s Supreme Court is set to have the final verdict on the fate of the 50-year-old Australian.

That is after the High Court in London overturned an earlier ruling, which said he would be a suicide risk if his sanctuary in the UK finally ends.

The whistleblower faces up to 175 years in a US prison if he is finally extradited and eventually convicted of leaking American military secrets.

But what are the risks of his transatlantic extradition?