Where the Antelope Bird is Found

We bought Charlie almost 15 years ago. We hadn’t intended to buy a bird. It was supposed to be a zoo visit. Debby found out about this cool place in Tribeca, The Urban Bird. All the baby birds for sale were just out there, standing on perches, sleeping in little cozy nests. No cages. Just young parrots – all kinds, sizes, and colors. Green ones from South and Central America; white ones from Australia; blue and scarlet ones from Indonesia; and Charlie, a grey one with a red tail from Central Africa. Charlie was featherless at the time and living above the store in the nursery. But I am getting ahead of my story.

All the birds in the store were babies, with one exception. One old bird was living in a cage, hanging high from the ceiling, in the back of the store, commanding a view of all who entered. I opened the door and Eli, our son, age ten, and I walked in. Debby lingered by the cash register reading a New Yorker article about this “only in New York” place.

The old bird spotted us. He was old and bitter. The two guys that had owned him had abandoned him when they split up. He saw us and yelled out “I’ve got a yeast infection.”  “What?”, said Eli, looking up first at the bird and then at me. Before I could answer the bird added a “fuck you.” Instantly Eli responded, “Dad, can we get a bird like that one?” And so we did.

Everything was blanketed with a thick layer of toxic dust, the ash from the ruins of the buildings and their contents. We trudged north swinging Charlie in his cage. “It’s O.K. It’s O.K.,” Charlie assured everyone we encountered along the way.
Parrots bond with one mate for life. Since we were part of the flock it would be one of us and with Eli at camp, it would be me or Debby. The issue was settled when Charlie, sitting on my index finger, bent down and bit me. “You son- of- a- bitch,” I exclaimed and reflexively dropped the poor bird. He never forgot it. And he bonded with Debby. He even tries to feed her, so that she will lay a good egg.  Even though she rebuffs his attempts, he still loves her.  And when he is mad he still says ” you son-of-a-bitch” in my voice.

Along with Charlie we had an outsized grey cat named Moe. Charlie was smarter than Moe and used to mess with him. “Come here Moe,’ he would command, in my tone of voice. Moe would wander over. And Charlie would wait until he got over to his cage and say, “You grey son-of-a-bitch.” 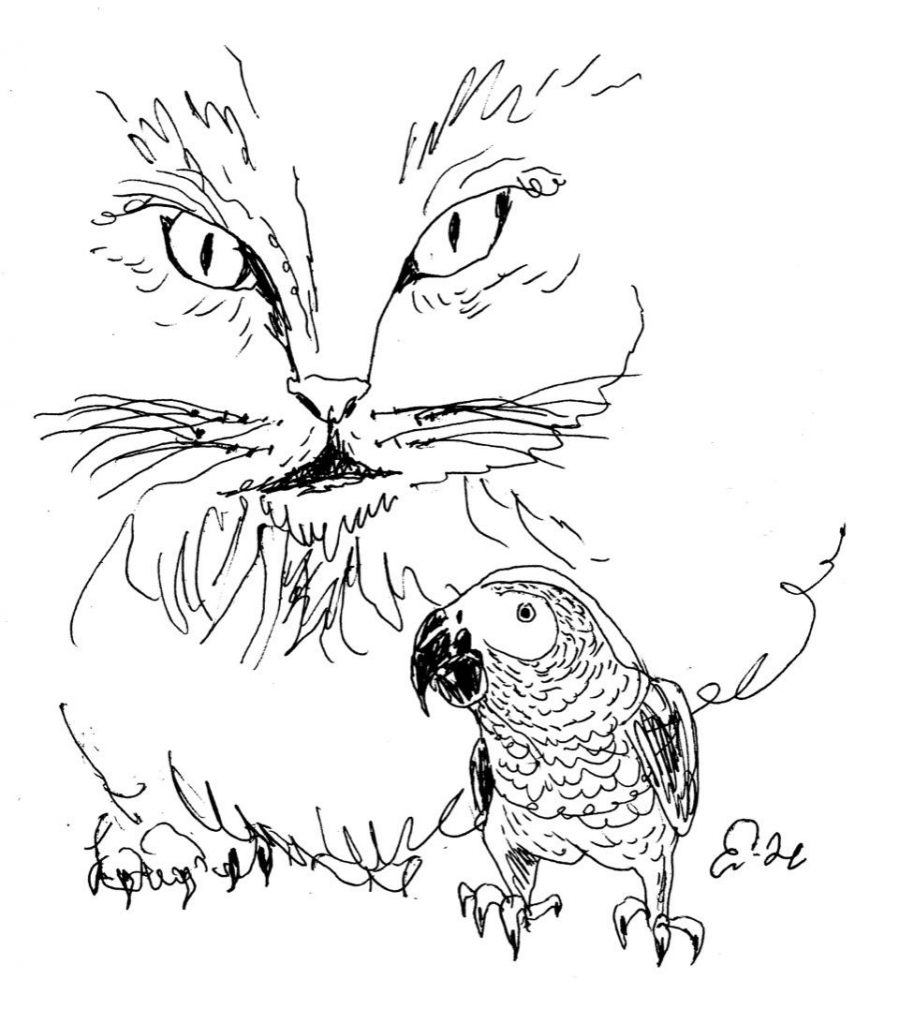 When Eli would practice guitar in the living room where Charlie lives in his cage he frequently would meet with Charlie’s free associations. Once a day Charlie unburdens himself with every phrase he knows, going on and on until it could make you crazy or you leave the room. That’s how he learned how to say “I’m gonna kick your ass.” Eli would yell that at him, hoping he would shut up, but to no avail.

On the morning of 9/ll I was supposed to meet my friend John Pellaton for breakfast at Windows on the World, atop of Tower Two at the World Trade Center. We were to meet at 8:00 o’clock. The first plane hit the building at 8:40. But John had a meeting and called just before to cancel. So we were still at home at the time the crash shook our apartment. When it shook it again for the second time we thought we were being bombed. With the big cat and Charlie we weren’t very portable, so we stayed put the first night. Everyone in our building left, except for us, Moe, Charlie, and a blind bass player on the 6th floor. The FBI rousted us the next morning. We left large Moe for later, packed up Charlie in his traveling cage, and headed up to our friends the Ratner/Ranucci’s, who we reached by cell phone. Everything was blanketed with a thick layer of toxic dust, the ash from the ruins of the buildings and their contents. We trudged north swinging Charlie in his cage. “It’s O.K. It’s O.K.,” Charlie assured everyone we encountered along the way.

But it was not O.K. We almost lost him. Five weeks later Debby and Eli, now nine years older than when we got Charlie and home from Oberlin College for fall break, where he was a sophomore, noticed that Charlie kept closing his eyes and nodding out. He even fell off his perch. We rushed him to The Animal Medical Center on the upper east side where, only in New York, they have a specialist vet who only deals in parrots. She checked him out, put him on an IV and kept him over night.  He had “avian respiratory disease.” This was serious.  Think of the canary in the mine shaft.  By the next morning however, he was doing much better and could come home.  When we called to see how he was doing the doctor said she guessed he was better because he just bit her assistant. She also said, “That will be nine hundred dollars please.” I replied, “But he was a victim of terrorism.” “Just a second,” said the doctor, and hustled down the hall. She came back and informed us that she had consulted with her superior and that a fund had been set up for animal victims of terrorism and that “there will be no charge.” She gave Debby some antibiotics and Charlie was nursed back to health.

Our office is kitty-corner from where the World Trade Center used to be. After 9/ll we lost it for a year. Contamination. We could have found another office downtown, but we could not get phone service. So six weeks after 9/ll we moved all our files out of our building and took them home. A big schtarcker cop from Staten Island with a tattoo and a flashlight helped us schlepp them all down from a darkened fourth floor suite and we took them home to our apartment down the block in Battery Park City on the other end of the World Trade Center ruins. 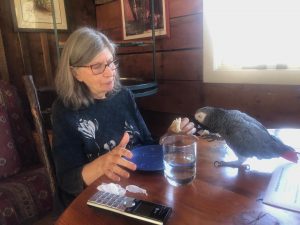 Meanwhile, there we were in our living room, practicing law, with all our files stacked up on the table on the other side of the window from Charlie’s cage.  Running an office with Charlie as a participant was really a challenge.  Every phone call was an opportunity for him to say “Hi, it’s Mike Smith, how are ya?”  Or give our phone number.  Debby was on the phone with an insurance adjustor trying to settle a case. The guy was giving her a hard time. He was loud and rude.  Charlie loves Debby. He is very protective. He heard the guy on the phone and was getting increasingly agitated, pacing back and forth on his perch. He couldn’t stand it. Finally he yelled out, in my tone of voice, real loud so the guy could hear him, “I’m gonna kick your ass, you son-of-a-bitch.”  The guy said “What?” But Debby said she didn’t think they had anything further to discuss and hung up on him, figuring she wouldn’t amuse him with a story about a bird who was right on.

Without wanting to get tiresome, there is one other “son-of-a-bitch” story to tell. Charlie sings. Not whole songs, but good chunks of them. He knows parts of the old rock ‘n roll number “Get a Job”, “get a job, dada dada”.   Our building super, Louis, a gentleman, but, like most supers, not that busy, was up in our place one morning fixing the radiator. He walks in and Charlie spots him and says “Get a job, you son-of-a-bitch.”  Louis was both genuinely insulted  and amused and went around the lobby telling people about the Smith’s bird. I felt bad about it.  He also sings “You Are My Sunshine”, a song written and made popular by a former governor of Louisiana, actually. It goes “You are my sunshine, my only sunshine, you make me happy when skies are grey.” Sometimes Charlie telescopes phrases, truncating them. Hilda, who comes to clean on Tuesday mornings is a big fan of Charlie’s and he looks forward to her arrival, asking “where’s Hilda?”   She is very religious and goes to church every morning. So she comes in the apartment door and into the living room. Charlie is out of his cage and sitting on top of it. “Ola, Charlie,” says Hilda. “Ola, Hilda” says Charlie. And then, “You are my son, my only son.” Like the annunciation, but this time from a parrot.  Hilda says Charlie is full of surprises.

Charlie also sings “Home On the Range,” but doesn’t quite get it right.  “Home, home on the range, where the antelope bird is heard” and then he trails off in a kind of a whistle. He also does one bar of “I’m a Lone Cowhand”. I tried to teach him “Istanbul Was Constantinople”, but he could never get the hard “K” sound of Constantinople and would break down into a paroxysm of guttural “ka, ka, ka, ka” sounds every time he tried it. He blew the hard “K” sound in The Internationale as well, to the disappointment of our household. He would try “Tis the final ka ka ka ka”. He just couldn’t get “conflict” out of his beak. But he redeemed himself by learning how to whistle the song, not that well, because I can’t hit all the notes, but passably and recognizably. When our friends Bill Schaap and Ellen Ray were over visiting Charlie started whistling the great anthem of the worldwide working class and Bill was incredulous, exclaiming to Ellen, “He’s whistling The Internationale,” as I beamed pridefully.

I tried to teach him the Bessie Smith song “Give Me a Pigfoot and a Bottle of Beer.” He unburdened himself with the only line in the whole song he gets one afternoon when Eli brought his friend Jeremy Kohn home from grade school. When they walked through the front door Charlie let out with a “Check all your razors, and your guns” and Jeremy shook his head saying to Eli, “Only in your house.” Charlie also intones philosophically, and lamentably, since both Debby and I are now getting into movies at the senior rate, “Enjoy yourself, it’s later than you think.”

Michael Steven Smith is the author, editor, and co-editor of many books, mostly recently Imagine: Living In a Socialist U.S.A. and The Emerging Police State, by William M. Kunstler.  He lives and practices law in New York City with his wife Debby (and Charlie). Michael Smith has also organized and chaired the Left Forum. He is co-host of the Pacifica radio show Law and Disorder and on the board of the Center for Constitutional Rights.