The Israeli Defense Forces: The Most Inept Army in the World?

HEBRON, PALESTINE — There is a constant argument between Zionists, who claim that the Israeli Army is “the most moral army in the world,” and those who live in the real world, who understand that it is nothing but a ruthless army of occupation and oppression. But there is another aspect of the Israeli Army that is not discussed as often and that is the fact that it is inept, maybe even the most inept army in the world.

The most obvious examples were in 2006 when the IDF’s “finest units” had to face Hezbollah and ran, and then in the various attacks on Gaza when Israeli soldiers had to actually face Palestinian fighters and paid a heavy price. Even watching the Israeli Army conduct simple daily operations on any given day, one can clearly see that it is a clumsy, oversized body and that it possesses very little intelligence.

Certainly, the Israeli Air Force can flatten any city, as long as that city — like Gaza, for example — has no defense capabilities. And Israeli tanks and artillery can destroy homes and kill — again, as long as the other side has no army with which to defend itself. And we know that Israeli snipers can shoot to kill or maim, as they choose, as long as they are safe and there is no one firing on them.

A day in the field

The following story happened to take place in the Old City of Hebron, on the ancient hill of Tel-Rumeida, but it could have been anywhere; indeed I had seen such examples of Israeli military clumsiness many times. I spent the day in the city of Hebron with my friend Issa Amro nd we were at the YAS Center, or Youth Against Settlements. The Center has a lovely outdoor area that overlooks wide terraces with large, ancient olive trees. I stood there and I could see that a group of soldiers was training among the trees. I couldn’t tell exactly how many there were but it seemed like perhaps it was a squad, or a team, as they sometimes refer to it — about 15 to 20 soldiers.

The soldiers were young, fully armed, and wearing helmets with camouflage material on them, which makes them look ridiculous. Surely camouflage is important but, considering I could see them and so could anyone else who was around, it seemed ridiculous, if harmless. I had noticed a young man from the neighborhood casually walking through the trees holding a cup of coffee when I had to step away for a few minutes.

When I returned I could see the soldiers busy with something and when I looked closely I saw the young man on the ground with the soldiers all around him. I called Issa to tell him and, without hesitation, he said “let’s go.” That was when the total ineptness of the Israeli Army began to unveil itself. Needless to say, neither Issa nor I were armed with anything save our phones. I followed Issa and began to record with my phone. 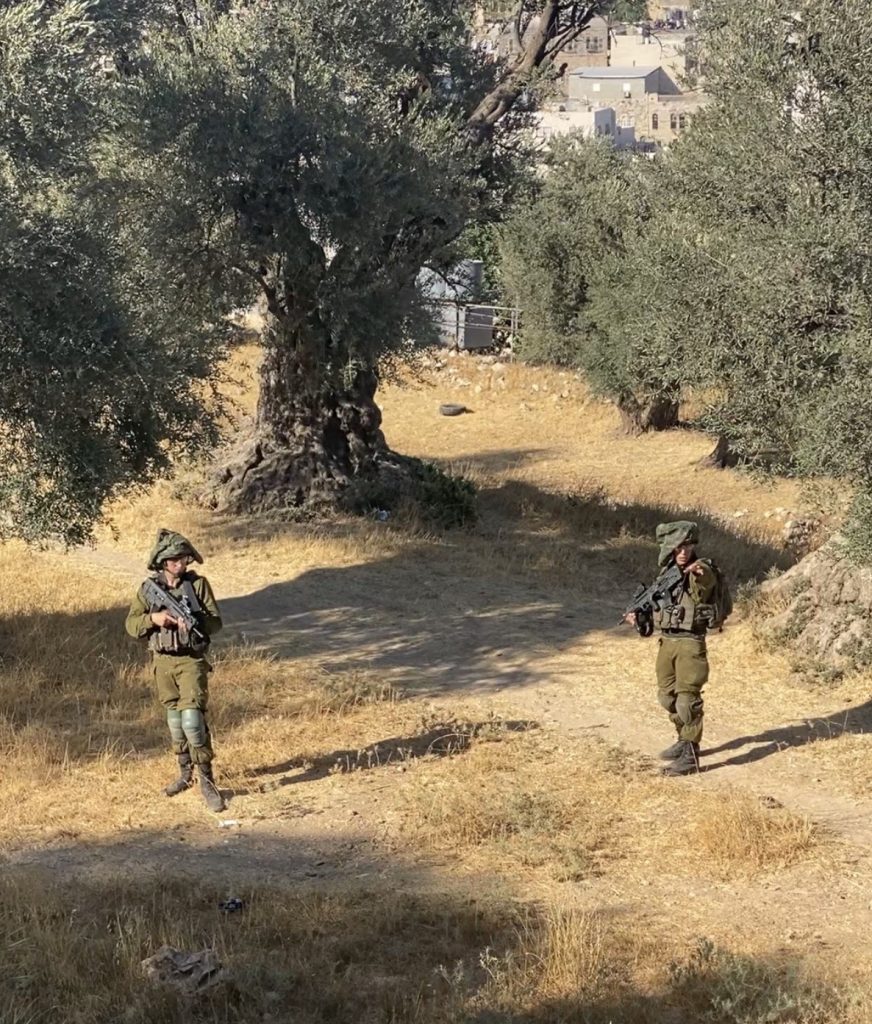 As soon as we were within sight of the soldiers, we could see about seven or eight of them standing around one of the large trees and under the tree we could see the boy in his bright red t-shirt. Several soldiers started to yell at us “wafef, wakef,” which means “stand, stand” or stop. They presumably wanted us to stop in our place. But that did not happen. Issa replied, “Why? We are allowed to be here, we are not breaking any laws.”

Then Issa proceeded to tell the soldiers that this boy should be released at once: “He lives in the neighborhood, his house is here.”

“Are you his father?” they asked.

“No, just a friend, and I know him and his family; their house is right here!” 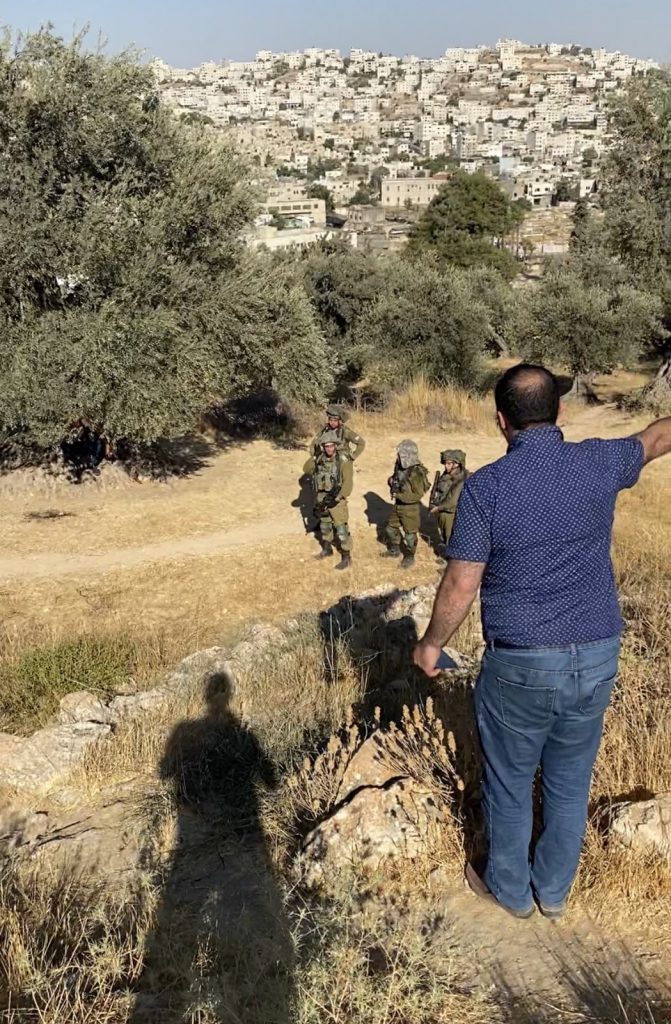 “We are not breaking any laws!”

“But he wasn’t carrying an ID on him,” the soldiers said.

The soldiers had the boy sit on the ground under a tree that covered most of him. On the ground lay the contents of his pockets: An open, half-empty bottle of juice, a phone, a wallet, and two packs of cigarettes.

A young lieutenant came up to explain to Issa that from now on everyone should carry their ID on them, everywhere. “You leave the house, ID in your pocket.” Then he added “Do you know who is responsible for enforcing the laws here? Me!”

“And me,” Issa replied, “I am a human rights defender” — meaning he is making sure that the soldiers do not abuse their authority.

Early on during the interaction, Issa pointed out to the soldiers that “We are not terrorists here,” and then he turned to one of them, who was clearly aiming his gun at the boy: “Lower your gun.” I caught the entire exchange on video and at that moment the soldier who was pointing his gun at the boy looked at Issa and then at his officer and, with a look of total dismay on his face, he lowered the gun. 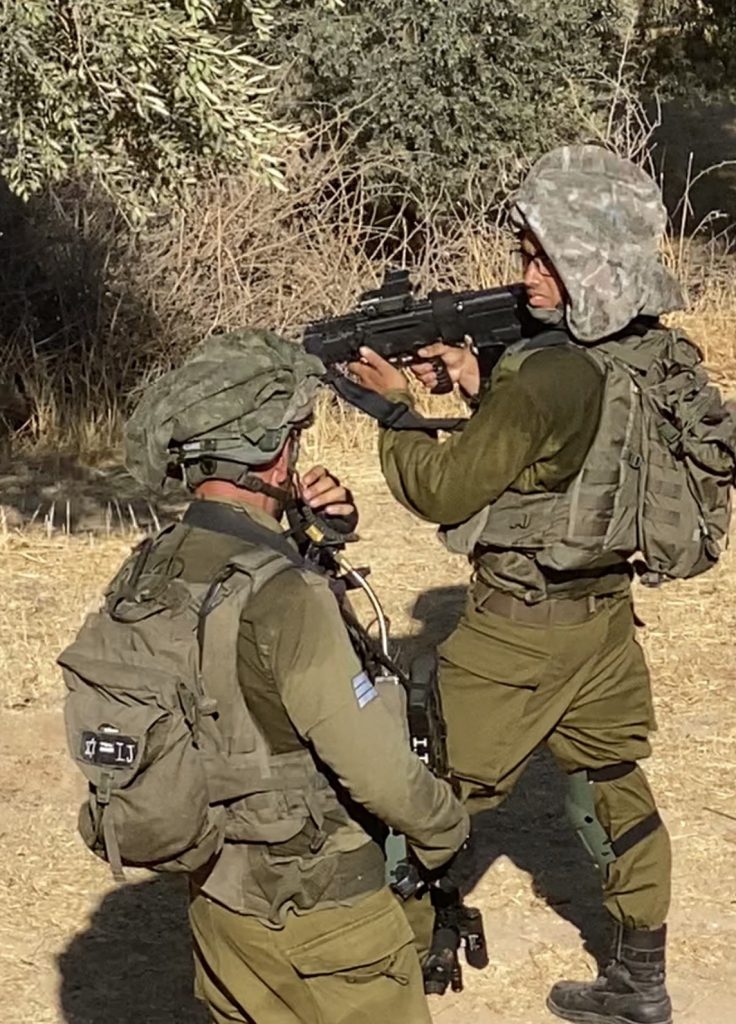 Once Issa identified the boy’s name to the soldiers, the lieutenant told the boy he could get up and go home. The soldiers were clearly out of their depth when facing an assertive, and incredibly courageous, Palestinian. They took orders from Issa and it was clear that the entire episode was because the soldiers were making a mountain out of a molehill.

In the end, the boy went home, Issa and I turned back to the Center on top of the Tel-Rumeida, and the soldier left. As they left, I couldn’t help thinking how clumsy, poorly trained, and full of themselves these soldiers were. Even the way they retreated made it clear that they were poorly trained. Certainly, they were in no danger at any moment during this exchange. But the way they left, none of them looked back, they were all walking with their heads hanging low and their guns clumsily hanging from their shoulders. And had someone wanted to harm them, they would have succeeded with ease.

“This was a training exercise for you,” Issa called as we were leaving. “For you, ambushing him like this is just training.” He was probably right. It may be that the officer decided to “train” his soldiers on how to detain an innocent young man who was walking home, minding his own business.

The whole thing took less than ten minutes, from the moment I called Issa until we headed back. However, it was an education. Considering this was Hebron, and considering how quickly Israeli soldiers pull the trigger and that they always get away with it, it was not at all obvious that this would end peacefully.

I have to credit Issa’s commanding presence, his understanding of the laws that govern the area, and his calm fearlessness in confronting the soldiers. Still, both Issa and the boy could have just as easily been shot and killed. Had that happened there would be no one to stand up for them. This episode shows once again that Palestinians remain without protection in a tragically capricious piece of the world.

Miko Peled is MintPress News contributing writer, published author and human rights activist born in Jerusalem. He served as an officer in the Israeli Defense Forces. His latest books are The General’s Son. Journey of an Israeli in Palestine and Injustice, the Story of the Holy Land Foundation Five.