Tantura: Coming to Grips with Alleged Genocide in Israel

Alon Schwarz’s Tantura, which won the Philadelphia Film Festival’s Jury Award for Best Documentary Feature, reminds me of the 1990 West German narrative feature The Nasty Girl. In Michael Verhoeven’s movie, Lena (Sonja Rosenberger) is a postwar student who unearths her town’s fascist past. She literally has denazification files dusted off at the town’s archives, and against all odds, insists upon revealing the awful truth she has discovered about the now complacent townsfolk, much to their horror.

Similarly, defrocked researcher Teddy Katz – who, ironically, was named after the founder of Zionism, Theodor Herzel – demands that Israel face up to what he alleges took place at the then-Arab village of Tantura in 1948, during what the Israelis call “the War of Independence,” but the Palestinians’ call the “Nakba” (or “catastrophe”). Schwarz’s 94-minute documentary investigates Katz’s master’s thesis submitted in the

The nasty boy’s thesis scored the university’s highest possible grade and passed under the radar until an Israeli daily newspaper published an article based on Katz’s allegations. Then, all hell broke loose. According to the Times of Israel, “The Alexandroni Brigade veterans went to war against Katz, suing him for defamation. The judge assigned to the case threw it out without listening to Katz’s tapes. Katz was pressured to sign a letter of retraction stating that the massacre did not happen, and the university revoked his degree.”  Professor Avner Giladi comments in the documentary that in the campaign to “silence” Katz, his thesis was removed from university library shelves, although Adolf Hitler’s Mein Kampf could still be found there.

Claiming it was made under duress, Katz tried to withdraw his recantation but the now white-haired, wheelchair-bound researcher is boldly speaking out again in Schwarz’s documentary, proving that this Katz has nine lives. Onscreen, Henio, aka Tzvi Ben Moshe, asserts: “It’s eating at me. I want to tell you about Tantura.” Moshe and Katz are not the only ones who talk in this 94-minute nonfiction tour-de-force, which includes extensive interviews with IDF vets, Holocaust survivors, Palestinians who formerly lived in Tantura and/or their relatives, historians and others. In Tantura, which had its world premiere at the Sundance Film Festival this year, various sources differ over whether or not Israel committed war crimes at the coastal village in 1948 and then covered it up.

Criticizing Israel comes with a price – whether one is Jewish or not, critics can be denounced as “Israel haters” subjected to “threats,” according to Ruth Katz, Teddy’s beleaguered wife. Nevertheless, author and Akevot Institute historian Adam Raz, who writes for the Israeli paper Haaretz,

Criticizing Israel comes with a price – whether one is Jewish or not…
eloquently expresses onscreen what is at stake for the country that grew out of the Holocaust: “The State of Israel wants to protect in any possible way the founding myth of Israeliness, which is that we are the most moral army and society in the world. That’s the DNA of the Zionist story… Now it must be said that this story is a lie.”

In titles, Tantura claims: “At least 750,000 Palestinians became refugees. To this day the Nakba is taboo in Israeli society.” Professor Shay Hazkani describes subsequent Israeli attempts to whitewash and falsify history. An ex-IDF soldier purports that “Ben-Gurion ordered it,” that is, driving the Palestinians out of the territory that became Israel. Regarded as Israel’s George Washington, David Ben-Gurion was its first prime minister and is considered to be the state’s founding father.

Looking into the camera, University of Haifa Prof. Ilan Pappe put his finger on the nub of the problem, explaining the contradictory nature of Israeli “exceptionalism”: “We are the chosen people. This is part of the Israeli self-identification as a very superior moral people… It’s very hard for Israelis to admit they committed war crimes. Because basically, the project of Zionism has a problem. It’s a tragedy in a sense. Jews had to escape from Europe to find a safe haven, but you cannot create a safe haven by creating a catastrophe for other people.”

U.S. viewers will find parallels in Tantura, not only in terms of so-called “American exceptionalism,” but in the current struggles from school boards to lawmakers over what version of history is taught, who teaches it, Critical Race Theory, etc. Onscreen an elderly veteran likens telling Israelis about IDF atrocities at Tantura to informing Americans that U.S. soldiers threw Vietnamese out of helicopters during the Vietnam War. People conditioned into priding themselves on how virtuous they fancy themselves to be are likely to feel upset when confronted with a documented history of mass murder.

Tantura combines lots of original interviews shot by Schwarz with mostly black and white archival footage of 1948, Ben Gurion, etc. A title at the top of the documentary says that the film uses recreations, but these reenactments aren’t labeled as such when they do appear onscreen, so the viewer is unsure what is historical material, and what Schwarz shot using actors. The camerawork also includes drone aerial sequences that bequeath a sense of place to a tranquil-looking hamlet perched by the sea, which a displaced Palestinian interviewee compares to a Greek village. A land surveyor also peruses the overhead images to search for evidence of the alleged mass burial site underneath a carpark.

Alon Schwarz previously co-directed 2016’s Aida’s Secrets, an award-winning documentary about Bergen-Belsen and a family’s skeletons in the closet. Schwarz seems to have a penchant for disclosing touchy topics and inconvenient truths. In Tantura Prof. Hillel Cohen expresses what could be the director’s coda: “The power of truth cannot be hidden and when it’s hot it surfaces.”

Tantura’s tantalizing prospect is that despite the recent electoral victory of reactionary Benjamin Netanyahu and what the Los Angeles Times calls the “most right-wing [government] in that country’s history,” some Israelis may be more open to facing and grappling with their country’s troubled past. The recognition and credits of Schwarz’s documentary suggest there a glimmer of hope in terms of setting the record straight in Israel regarding the fate of the village in particular, and of the Nakba in general. 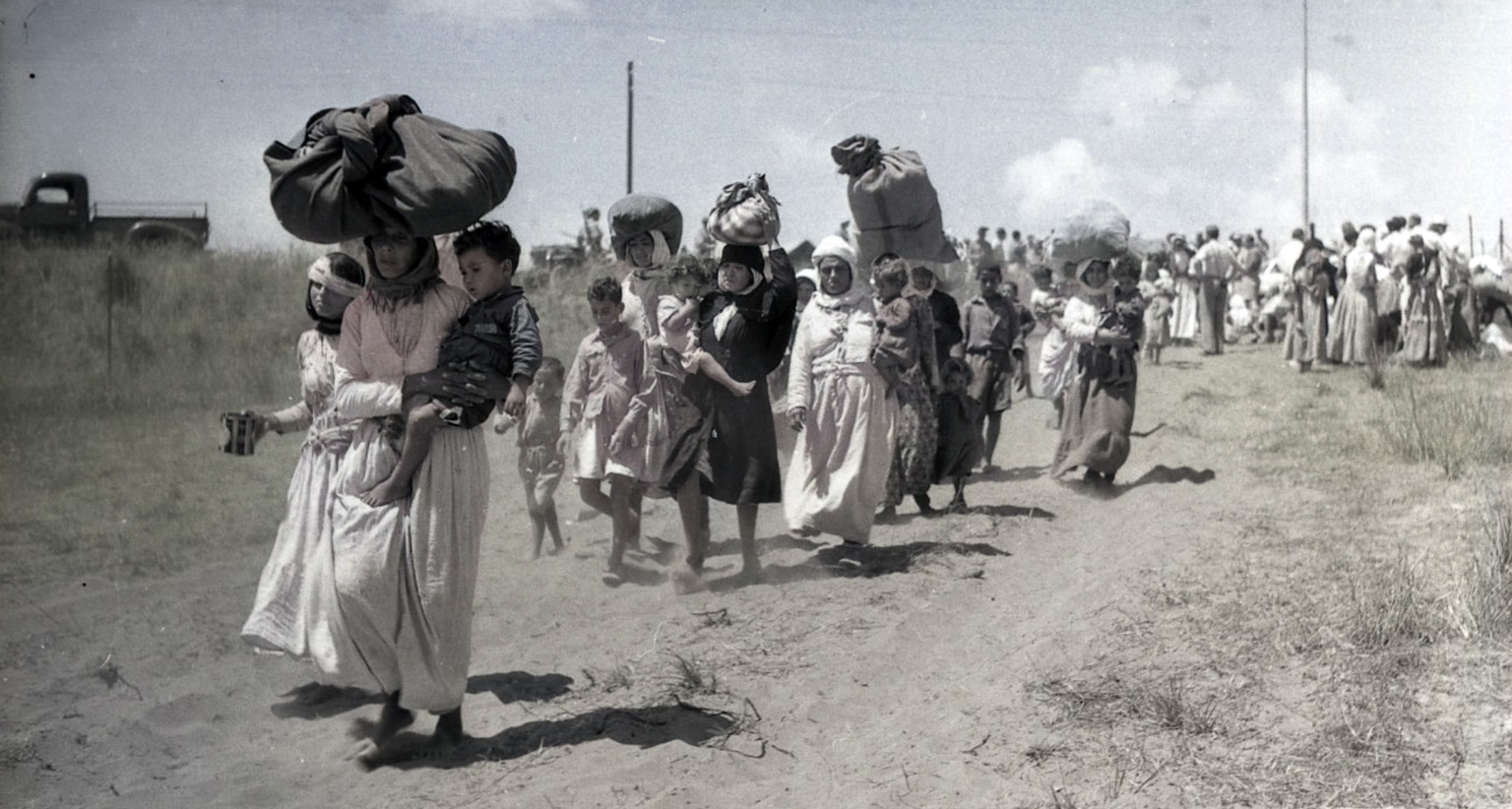 June 13, 1948: The expulsion of Tantura women, children and elderly from Furaydis to Jordan. The Red Cross is supervising. Photo credit: Beno Rothenberg collection.

According to Tantura’s end credits: “This film was produced with the support of The New Fund for Cinema and Television [which is endowed by a private philanthropy, the America-Israel Cultural Foundation], the [Israeli government’s] Ministry of Culture & Sport and the Israel Film Council [which is run by this government ministry. (This backing may be a step forward because according to Columbia Global Freedom of Expression: “This Israel Film Council prohibited the screening of Muhammad Bakri’s Jenin Jenin, concerning the infamous military operation of Israel in Jenin Refugee Camp in 2002.”

The fact that these private and government entities assisted Tantura is cause for optimism that Jewish people around the world and Israelis in particular can start coming to grips with the painful realities of the Nakba for Palestinians. After all, it was a famous Jewish rabbi who declared 2,000 years ago: “The truth shall set ye free.”

Tantura is ​in English, Hebrew and Arabic with English subtitles. For more info: reelpeakfilms.com/tantura.

Ed Rampell writes for CounterPunch, is a contributor to the book on America’s former Poet Laureate “Conversations With W.S. Merwin”, and co-author of “The Hawaii Movie and Television Book“.