Take Me ‘Home’ to Jerusalem

It’s 3:40 a.m. in Palestine and I’m crying. Not like a teenager does over a bad grade at school or a love that’s not returned. I’m crying at the sight of the dead bodies of my beloved sisters and brothers in Jerusalem. 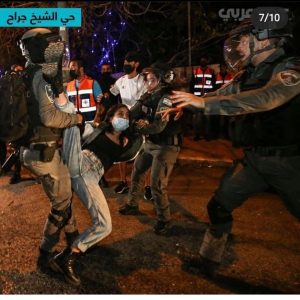 My heart aches for my fellow Palestinians as I see them fighting the forces of the occupation on their own. There is nothing I can do to help them, no way even for my words of solidarity to reach their ears as they stand in the streets against the flying rubber bullets (which, by the way, can kill and maim, despite the innocuous sound of “rubber”). No matter how many letters there are in the alphabet and how many words there are in our vocabulary, it’s impossible for me to describe how helpless I feel, or how painful and scary these developments are for every Palestinian.

For me, it feels personal because I have many friends who live in Jerusalem and the West Bank who I’ve met online. I also have friends here in Gaza with relatives living in Jerusalem. When they rant to me about the situation, it breaks my heart a little more. Palestine is a very small territory; every part of it is so connected to the rest, despite the occupation.

Try to imagine that one day, when you are peacefully sitting in the house in which you have lived your entire life, soldiers suddenly barge in, claiming the home is not yours and ordering you to leave. Then you have no choice but to watch as your beloved home is handed over to another family, complete with all of your memory-laden belongings. This is exactly what is about to happen to my people in the East Jerusalem neighborhood of Shaikh Jarrah.

Israel’s Jerusalem district court has already ruled that six families must leave their houses now, despite the fact that they have lived there for generations. In total, it’s estimated that about 300 residents, including dozens of children, are at risk of being forcibly displaced from their houses to make room for Jewish settlers.

This has been a very long, agonizing struggle for the Palestinians of Jerusalem. In 1972, several Jewish settler organizations filed a lawsuit against the families living in Shaikh Jarrah, claiming that the land originally belonged to Jews. These lawsuits forced 43 Palestinians from their houses in 2002, followed by the Hanoun and Ghawi families in 2008 and the Shamasneh family in 2017.

So, why are the Israelis targeting Sheikh Jarrah, you may ask. In 1956, 28 Palestinian refugee families were displaced from their homes in Yafa and Haifa; and they settled in Sheikh Jarrah, specifically in an area called Karm Al-Jaouni. The West Bank, including East Jerusalem, was under the mandate of Jordan at the time, which agreed that the UN agency for refugees (UNRWA) would build housing for these families. The deal also required the families to renounce their refugee status in return for land deeds that would be held in their names after they had maintained residence in the area for three years.

Unfortunately, Jordan that promise to the families was broken. In 1967, Jordan lost its mandate over the West Bank, including East Jerusalem. A decree in which the Israeli finance minister agreed to be bound by the Jordanian-UNRWA agreement, is not being honored.

I can only read and watch the news with anguish. But my fellow youths In East Jerusalem are protesting. After mosque services, they’ve been meeting at Jerusalem’s Damascus Gate and marching to Sheikh Jarrah to show their solidarity. Israeli police have responded brutally, using skunk water, tear gas and rubber-coated steel bullets to try to disperse them.

Watching helplessly, I feel as if my body is paralyzed, as if someone is chasing me and I’m unable to scream for help, gasping for air. All I do is repost on social media to spread awareness.

A famous singer once sang: “I am afraid, oh heart, to grow up in this diaspora, and have my home not recognize me. Take me, take me. Take me back home.” How much every Palestinian relates to this song today! How badly I want to go to Jerusalem, the place I call home but have never been allowed to visit. How much I miss the sand I have never touched, the trees I never sat under, the sound of birds and people I have never heard. I miss it all, I miss home. Take me home, even if it is my last wish.

Afaf Alnajjar is an English literature student at Al-Aqsa university, Gaza. She writes for the website wearenotnumbers.org, which empowers Palestinian youth to tell the human stories behind the numbers in the news.