As Taiwan tensions build, Okinawans push for US military base closure

Bill Clinton promised to close the base in 1996. But plans for more construction and a heightened focus on the Pacific put the islands and their unique biodiversity at risk indefinitely.

Originally published at The Intercept

One April afternoon in Tokyo, the U.S. president made a welcome promise to reduce his military’s presence in Okinawa. Three U.S. service members had raped a 12-year-old Okinawan girl the previous September, and enraged locals had spent months protesting the Japanese prefecture’s dense network of U.S. bases.

“When the Prime Minister asked us to consider the concerns of the people of Okinawa and I became acquainted with them, as a result of some of the unfortunate incidents that you know well about,” said President Bill Clinton, standing side by side with Japanese Prime Minister Ryutaro Hashimoto, in the April 1996 speech, “it bothered me that these matters had not been resolved before now, before this time.” His administration agreed to close the Futenma Air Station, a major Marine Corps base in the populous Okinawan city of Ginowan, within five to seven years.

On Tuesday evening in Washington, 87 Okinawan and international civil society groups will send a letter to the House and Senate Armed Services Committees, urging the Democratic Congress under President Joe Biden to at last close the base. It has been more than 26 years since Clinton promised a swift end to the Futenma Air Station, and the Japanese and U.S. governments have spent the decades pushing environmentally destructive plans for construction and moving goalposts for their completion. As the years dragged on, the likely timeline for Futenma’s closure pushed from the original 2001-03 estimates to 2025, to 2035, to 2040, to — as the letter’s authors argue — realistically, never.

The catch is that the closure is not really a closure; it’s a relocation. In the U.S. and Japanese governments’ eyes, the new base project, called the Futenma Replacement Facility, or FRF, must be completed before Futenma can close. In order to complete it, the Japanese government must dump landfill — sourced from at-times-controversial locations across Japan and Okinawa — into Henoko-Oura Bay, an area of unique biological diversity about 26 miles from Futenma. “From an engineering perspective,” the letter argues, “there is no prospect that its defining feature,” an airport landing strip, “will ever be constructed.” Following a geological survey conducted by the Japanese government, the seafloor for which the airplane runway is destined was deemed “soft as mayonnaise. 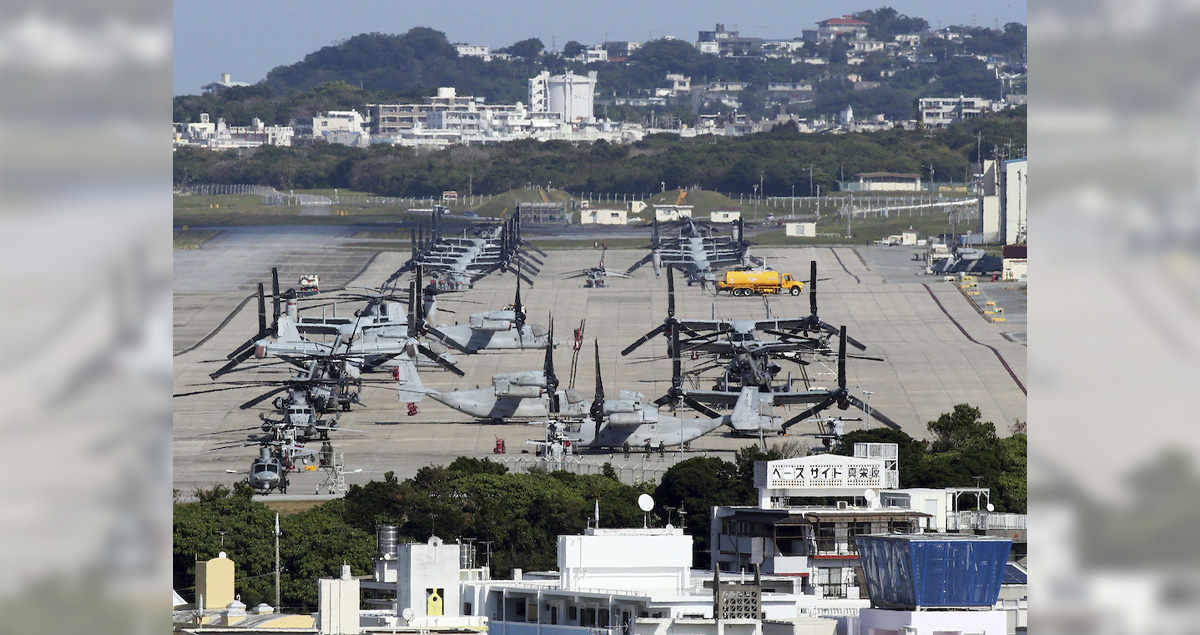 Signed by 52 organizations from Okinawa and Japan and 35 from abroad, including the Asia Pacific American Labor Alliance, the Center for Biological Diversity, and CODEPINK, the letter comes at a time of heightened tensions between Western-aligned powers and China over Taiwan’s autonomy. Due to its close proximity to Taiwan, Okinawa — whose U.S. military installations occupy 15 percent of the main island’s existing land — is considered a key strategic location. Expanding the land to put a new base there is, supposedly, crucial to countering China; simply paring down to 31 is out of the question.

“Okinawa was very important to Taiwan’s history, and to the notion of kind of constraining or containing China,” James Lin, a historian of modern Taiwan at the University of Washington, told The Intercept. “So I imagine that if there’s any kind of conflict that Okinawa would be very much involved.”

In March, the government of Japan declared Okinawa a “combat zone” in the event of a Taiwan contingency.

“Increasing tensions between U.S. and China have made many of us in Okinawa extremely uncomfortable”
Last month, Japanese Defense Minister Nobuo Kishi told the press that five Chinese ballistic test missiles had landed in Japan’s “exclusive economic zone” for the first time ever. The missiles, sent in response to a controversial visit to Taipei by House Speaker Nancy Pelosi, reportedly landed in the waters southwest of Hateruma: one of Okinawa Prefecture’s southernmost islands, almost 300 miles from the main island and about half that distance from Taiwan.

In just over a month since, China has conducted a slew of military exercises and imposed economic sanctions on Taiwan, buzzing drones and planes through Taiwanese airspace and banning imports and exports of various fruits, fish, and sand as an ever-expanding list of U.S. officials made trips to the island.

“The increasing tensions between U.S. and China have made many of us in Okinawa extremely uncomfortable living here,” Hideki Yoshikawa, the director of the Okinawa Environmental Justice Project and the letter’s lead author, wrote in an email to The Intercept. While he tries not to be an alarmist or emphasize worst-case scenarios, Yoshikawa said, “what has been taking place in Ukraine since Feb. this year has certainly made us think about the worst.” 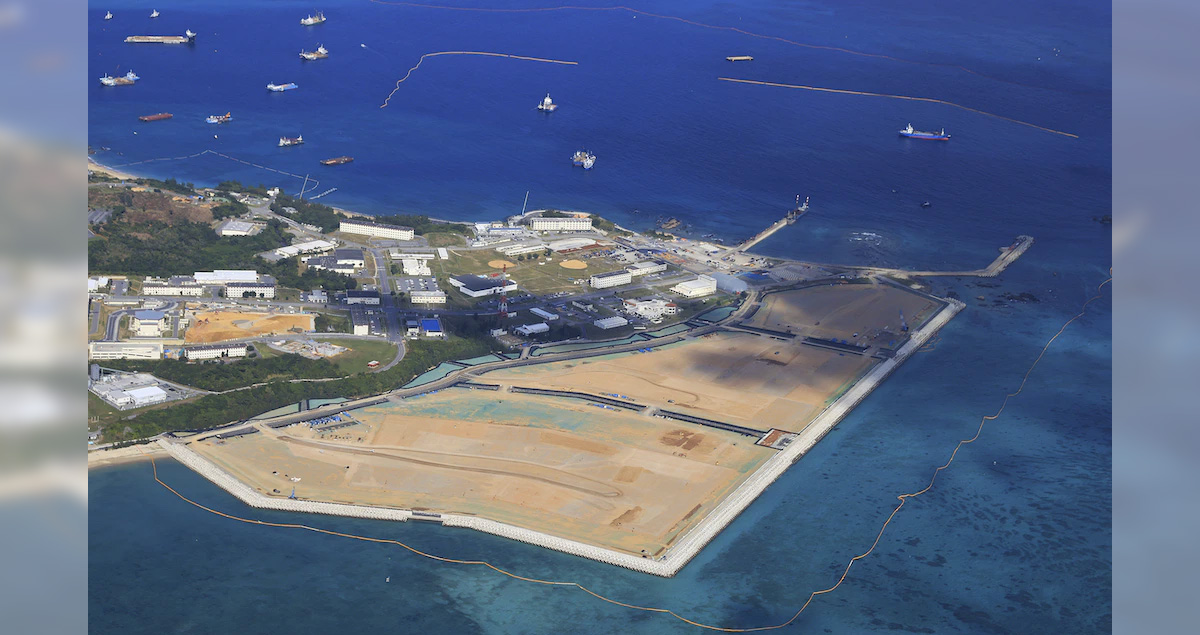 The dynamic between Japan and Okinawa in many ways parallels the relationship the United States has with Hawaii. Like that Pacific archipelago, Okinawa was once ruled by a local monarchy, known in Okinawa’s case as the Ryukyu Kingdom. Imperial Japan and China struggled for control over the Ryukyus, which traded with both empires for centuries, until Japan annexed it in 1879. Japan’s successful colonization made the island chain that became Okinawa the country’s youngest prefecture, akin to a U.S. state. Some Ryukyuans now organize for designation as an Indigenous people — which the United Nations has recommended that Japan grant — but the Japanese government still refuses to recognize them.

In the wake of World War II, Japan formally gave up both its military and its southernmost prefecture: A new peace mandate in the constitution barred it from possessing an army with the capacity for offense, and the 1951 Treaty of San Francisco put Okinawa under U.S. civil administration. Just over 20 years later, the islands reverted to Japanese control, with the condition that the U.S. could maintain military occupation at a network of bases — intended as a “strategic deterrent” against China and a protective stopgap for Japan. Now, as tensions strain over Taiwan, Okinawa stands to end up in the crosshairs.

“If a military conflict between the two super powers (U.S. and China), with Japan involved, becomes a reality, either by plan or by accident, I expect, missiles will fly from China (or its war ships and planes) to hit U.S. bases and Japanese Self-Defense Forces bases in Okinawa,” Yoshikawa told The Intercept.

The original proposal … required the government to fill the bay — home to more than 5,000 aquatic species
The United States did tap its forces in Okinawa amid an earlier high-pressure episode concerning Taiwan: During the Third Taiwan Strait Crisis, the Clinton administration ordered a fleet of U.S. battleships to sail from Okinawa through the strait in response to a series of Chinese missile tests. Occurring between 1995 and 1996 — with its climax just before the promised Futenma base closure — it was hailed as “the biggest display of US military power in Asia since the Vietnam War” by the BBC.

Last month, on the heels of the various U.S. congressional trips and the resultant Chinese show of force, two U.S. naval ships again sailed through the Taiwan Strait. The hawks at the Center for Strategic and International Studies have termed the current situation “The Fourth Taiwan Strait Crisis.”

“The Japanese Government is intensifying its efforts to frame the FRF project in the narrative of deterrence against threats from neighboring countries,” Yoshikawa and his co-signatories write in their letter. But “with rising awareness of the soft seafloor issues and with the very feasibility of the FRF construction in serious question, the Government’s arguments about deterrence and strategy are unconvincing.”

The original proposal for the facility would have required the government to fill the bay — home to more than 5,000 aquatic species, including the critically endangered Okinawa dugong, rare blue coral colonies, and dozens of new crustacean species discovered in 2009 alone — with dirt. The current proposal requires so-called ground reinforcement work, or the driving of compacted sand pillars into the seafloor to fortify its slushy consistency and support the base.

“Despite the seafloor reinforcement work being a significant revision to the original plan, the Okinawa Defense Bureau has not adequately reassessed the safety and feasibility of base construction,” the letter states. As a result, Denny Tamaki, the governor of Okinawa prefecture — who faces a reelection contest largely focused on the base issue on September 11 — has repeatedly denied requests to approve permits for the base’s construction. The Japanese government has repeatedly overridden him.

The letter also asks the U.S. government to compel the Department of Defense to disclose when, exactly, it learned of the seafloor issue and release its own reports. The Japanese government didn’t acknowledge the problem until 2019, despite the fact that a Japanese geological survey discovered it in 2015. When the surveyors tested the force required to drive a spike into the seafloor, they found “that instead of being driven into the soil with a hammer, the testing spike sank of its own weight.”

At the Center for Strategic and International Studies, generally known for beating the drums of war and not for urging restraint, Mark Cancian wrote in 2020 of the FRF project: “It appears unlikely that [the base construction] will ever be completed.”

Building yet another giant U.S. base in Okinawa does not decrease, but rather increases, the likelihood of attack
Appealing to the Armed Services Committee’s presumed desire to strengthen U.S. military strategy, the letter finds it “regrettable that a bill proposed in June 2020 by the Readiness Subcommittee of the House Armed Services Committee, which would request the DoD to study the soft seafloor issues, was not adopted into the 2021 National Defense Authorization Act.” At the time, Tamaki had recently met with legislators in Washington, and the Readiness Subcommittee’s version of the NDAA would reportedly have compelled the Defense Department to study the seafloor both for its soft consistency and the presence of earthquake fault lines. But it never appeared in the final NDAA. The office of Rep. John Garamendi, the Readiness Subcommittee’s chair, did not respond to The Intercept’s request for comment.

Yoshikawa hopes that, assuming environmental preservation is not enough, the sheer incompetency of the FRF project will allow U.S. lawmakers to see that its strategic advantage is overpromised.

“Clearly, building yet another giant U.S. base in Okinawa does not decrease, but rather increases, the likelihood of attack,” the letter argues in its concluding notes.

Yoshikawa pointed out that the articles of the Geneva Convention, which seek to protect civilian populations amid military conflicts, would prove useless in Okinawa: The physical proximity between the bases and civil society would make the convention’s protections difficult, if not impossible, to enforce.

“We would be used as human shields for military bases, not the other way around,” Yoshikawa said. “We don’t want to be used and we don’t want our seas, forests, lands and skies to be used in the conflicts of states.”

Maia Hibbett is the Associate Editor at The Intercept’s D.C. Bureau (theinterceipt.com).  She has written for The Nation and The Baffler.