by Law and Disorder Podcast

Susan Schnall is  co-coordinator of the Vietnam Agent Orange Relief and Responsibility Campaign. She was an active duty Navy nurse during the conflict in Vietnam and in 1969, she was tried and found guilty by general court martial of conduct unbecoming an officer for dropping anti-war flyers over military bases in the San Francisco Bay area and an aircraft, and wearing her uniform in the GI and Veterans March for Peace demonstration in San Francisco.

She is a member of Vietnam Veterans Against the War and the American Public Health Association. Susan is also President of the New York City Veterans for Peace chapter and a board member of national Veterans For Peace. Susan organized and led a delegation of Science/Public Health professionals to Vietnam in 2013 to survey the land that had been contaminated by the US use of Agent Orange/dioxin and visit the people who had been harmed by the chemicals. In 2006, Susan was awarded the medal for peace and friendship between peoples by the Vietnam Union of Friendship Organizations.

The Vietnam War ended in 1975, but Vietnamese people today continue to suffer the effects of Agent Orange, the deadly dioxin-containing chemical weapon that the U.S. sprayed over 12 percent of South Vietnam from 1961-1971, poisoning both the people and the land. The defoliant was used to more effectively prosecute the war against the Vietnamese people, exposing their hideouts, destroying their crops and food.

Descendants of approximately 2 to 4 million Vietnamese people, hundreds of thousands of U.S. Vietnam veterans, and Vietnamese-Americans who were exposed to the toxin continue to record disproportionate rates of congenital disabilities and higher rates of many diseases.

U.S. veterans receive some compensation from the U.S. government, but very little assistance has been given to the Vietnamese people, who were the intended victims of the defoliant Agent Orange. Thus, on May 25, Rep. Barbara Lee (D-California) introduced H.R. 3518, the Victims of Agent Orange Relief Act of 2021, in the House of Representatives. The Vietnam Agent Orange Relief & Responsibility Campaign (for which I serve as co-coordinator) assisted Lee in drafting the bill.

Lee said, “The United States has a moral responsibility to compensate the victims of the Agent Orange campaign. In the same way we are focused on beginning to repair the damage of systemic racism in the form of reparations, and the war on drugs with restorative justice, it is also our responsibility to try and atone for this disgraceful campaign during the Vietnam War.” 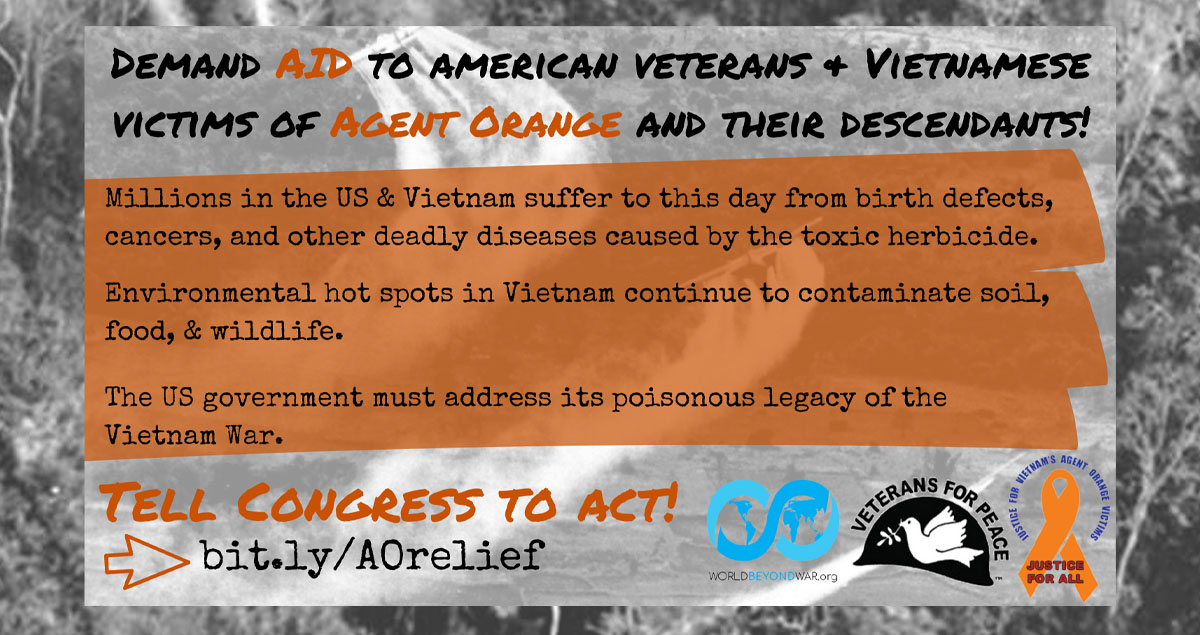 Susan Schnall is president of New York City Veterans For Peace. She served as a nurse in the Navy during the Vietnam War and was court-martialed for her antiwar activities. She is the co-coordinator of the Vietnam Agent Orange Relief and Responsibility Campaign and an assistant professor at New York University.