The Western corporate media claims that “North Korea prosecutes (or even executes) its people for watching South Korean dramas.”

We don’t know if that’s the case in North Korea–fake news about North Korea is the norm–and the only allegations of this phenomena come from the debunked defector testimony of known liars (like Park Yeon Mi)–who are rewarded for telling hyperbolic lies–or from dubious South Korean sources like the rightwing Chosun Ilbo.

These hyperbolic claims are then amplified by rightwing anti-communist organizations (like Liberty in North Korea) and the U.S. mainstream media.

However, contrary to these dubious claims, we can see with certainty that South Korea does seek to prosecute people for watching North Korean films.

It’s not an exaggeration to say that almost everything South Korea accuses North Korea of doing can actually be attributed back to South Korea. In other words, these claims are projection–not cinematic, but psychological.

According to the Jeju Daily, the Yoon government is claiming that watching the North Korean film “The Story of Our Home,” … violated South Korean National Security Law.
Dangerous Dramas

According to the Jeju Daily, the Yoon government is claiming that watching the North Korean film The Story of Our Home, screened in South Korea in February 2019 as part of a reunification festival, violated South Korean National Security Law.  It is prosecuting the organizers of the film screening.

The North Korean film is a family drama about how a teenage girl and her two younger siblings try to adapt to the loss of their mother. The community rallies to support her, but she is stricken with grief and acts out with hostility, especially towards a neighbor who tries to help out in caring, even maternal ways.  It’s a common dynamic you might see in any foster or hybrid family here. There’s also an older brother, in the military, who is kept in the dark about the loss.

This is utterly harmless stuff–with a wholesome message about studying math thrown in–but the South Korean government’s National Intelligence Service (NIS) is hounding the organizers, the former head and current heads of the Jeju branch of the Progressive Party and the Secretary-general of the Jeju Federation of the National Farmer’s Association for violating the National Security Law.  They are accused of engaging in “ideological education” and “praising the North Korean system.”The organizers of the screening have argued that the film was approved by the South Korean government (Ministry of reunification) itself for screening. The DVD, after the screening, was promptly returned to the ministry.

This is happening within the current political context where the South Korean Yoon government is currently in full red scare/red-baiting mode, a reversion to the habits of the South Korean military dictatorships of the 1960-1980s.

The Yoon administration, with the recent promulgation of its Indo-Pacific Strategy, has gone full bore in adopting a confrontational–if lightly coded–military, economic, and political posture towards China. As the identity of the name suggests, South Korea’s strategy is in lockstep ideological, military, and political congruence with the US’s own Indo-Pacific strategy to contain, constrain, and rollback China’s development and prominence. This despite the considerable harm it is already seeing to its own domestic industries and the risk it poses to its development.

The Yoon’s administration’s coordination and co-militarization with Japan in the service of US containment against China, its neoliberal policies and massive labor suppression, and its general incompetence–leading to mass catastrophe such as happened in the recent mass crush catastrophe–has resulted in fierce opposition by large numbers of South Korean people who have taken to the streets in mass demonstrations 23 times. 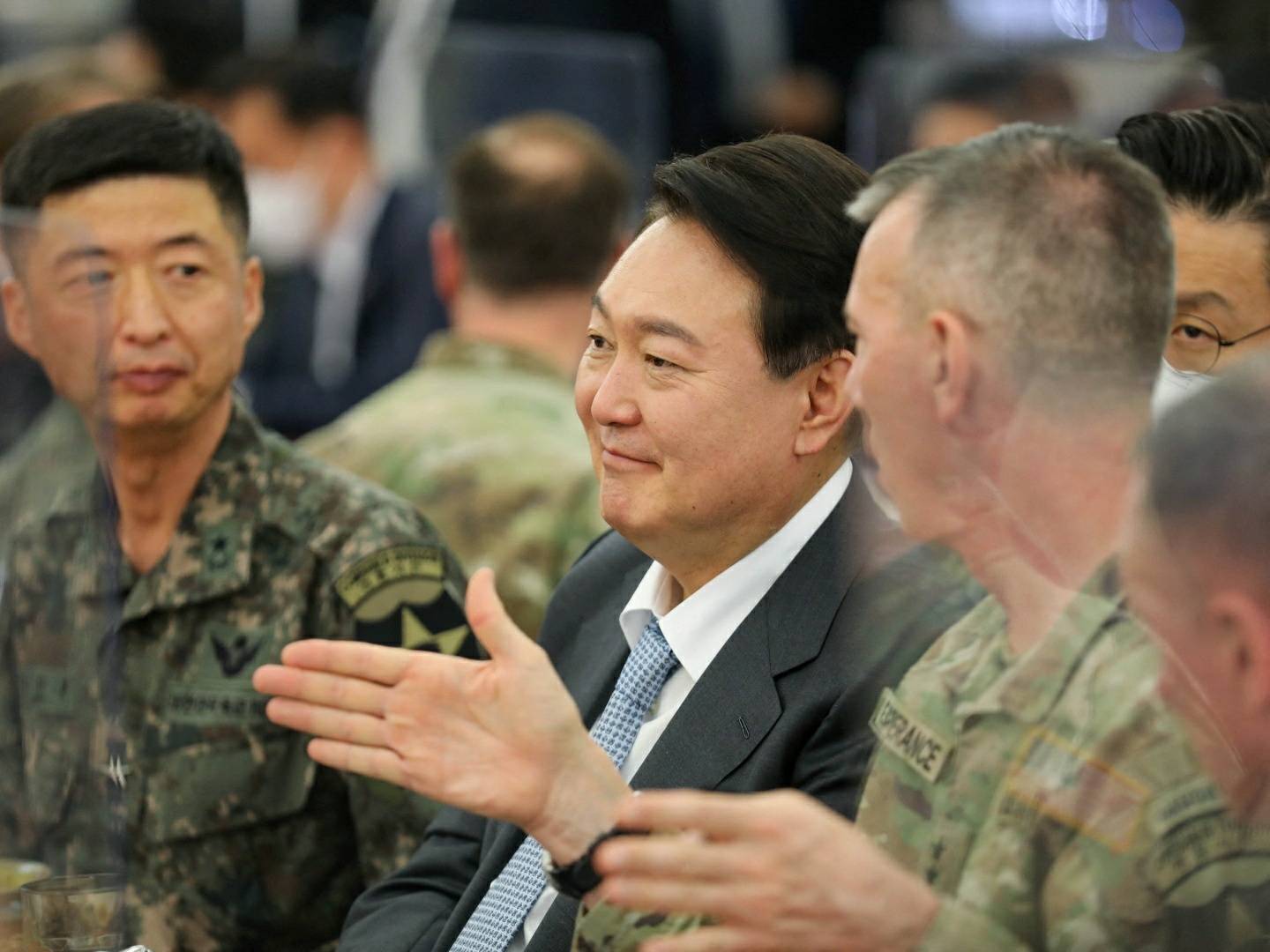 These huge weekly demonstrations have demanded Yoon’s immediate resignation and prosecution of the first lady. The demonstrations also express strong opposition to US militarization and military exercises, demand the return of South Korean sovereignty, and charge President Yoon with selling out and betraying the nation. The Yoon administration currently has a 22% approval. 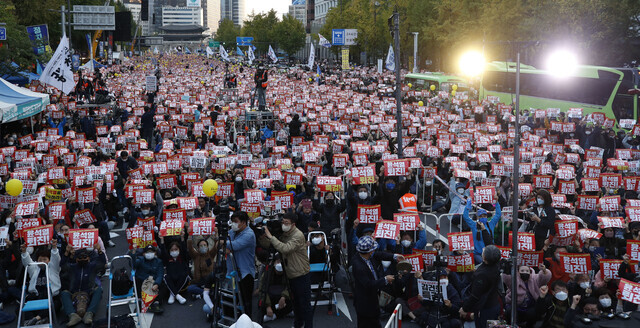 To counter this, the Yoon administration has been shutting down opposition to its government and policies with allegations that opposition is derived from pro-North sentiment or even alliance with North Korea.  It is currently engaged in a massive political witch hunt of its opponents.  It has arrested key members of the previous progressive administration, has raided the opposition party’s candidate’s house hundreds of times, and it is  widely feared that Yoon will try to imprison the former progressive president, Moon Jae-in, in relation to his policies towards North Korea. 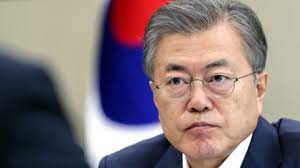 President Yoon, a former chief prosecutor, for his part, had promised during his campaign that he would create a “republic of prosecutors”.  He also received the strong support of US leaders and the US power establishment, publishing an article for the Council on Foreign Relations’ journal Foreign Affairs magazine in which he detailed his hawkish concordance with US policy against China and his desire to be a global “pivot state”–a clear reference to Obama’s “Pivot to Asia” (which started the momentum for military encirclement and escalation against China). Yoon’s article was widely seen as the fulfillment of Washington’s Christmas list.

Squeaking by to be elected on the tightest of margins in South Korea’s electoral history, Yoon has been making good on his words shaping and sculpting South Korean military and foreign policy to align with US goals.  To fulfill  his promise of creating a “republic of prosecutors”, and to backstop what are clearly unpopular policies, he has been appointing prosecutors who were subordinate to him to the majority of top administration positions, while prosecuting without mercy anyone who shows the slightest sign of opposition, in particular to his foreign or domestic policy.  One key weapon has been South Korea’s National Security Laws.

For example, Yoon is claiming that the recent labor strikes in South Korea organized by the KCTU “were upon orders from North Korea,” a hyperbolic claim completely denied by the organizers.

South Korea’s national security laws (see here–a relic of the past red-baiting military dictatorships–are some of the most draconian in the world–and have been applied to destroy lives and livelihoods despite their commonsense-and human rights-contravening extremism and punitiveness.  Revised and bowdlerized several times, they still retain the core genes of their intent: a political version of the Malleus Maleficarum (the medieval guide for witch hunts) to destroy “subversive thought” in the South.  Like the Malleus, outdated and incompatible with any notion of a modern state, let alone South Korea’s much self-promoted “freedom and democracy” and “respect for individual rights.”

For example,  Under the South Korean National Security Law, for the act of “praising or sympathizing with” North Korea (in the legislation, NK is always referred to as “anti-state group(s)”), South Korean individuals can be imprisoned for up to 7 years:

Article 7: Praising or Sympathizing
Up to 7 years in prison for those who praise, encourage, disseminate or cooperate with anti-state groups, members or those under their control, being aware that such acts will endanger the national security and the democratic freedom.

If investigation of the KCTU labor strikes shows that they were “upon orders from North Korea“, as is claimed by the government, depending on the judicial outcome and the specific crimes they are charged with, the accused could be sentenced to death for “commission of anti-state acts under the influence of NK”:

Meeting with NK officials, as alleged against the KCTU, could result in a 10 year sentence:

Article 8: Meeting, Corresponding, etc.
Up to 10 years in prison for those who confer, correspond, or communicate using other means with anti-state groups, members or those under their control, being aware that their acts will endanger the national security and the democratic freedom.

If any of the accused are successfully prosecuted, then those in their vicinity could be charged with “failure to inform”–i.e. failure to “rat out” their friends, neighbors, colleagues, or even family:

Article 10: Failure to Inform
Maximum five years in prison or a fine of 2000,000 won for those who fail to inform the police or security officials of persons who have committed acts defined in [3], [4], [5.1, 3 and 4]. This punishment may be reduced or waved in the case of involving family members.

The film organizers could be charged with “possessing (even temporarily) or disseminating arts” (from NK):

Will the western media cover any of this?  Not a chance.

Note the similarity to the anti-Russia campaign by the mainstream media here.

The fact that such national security laws even exist on the books gives the lie to the often repeated claim that South Korea is some sort of model democracy.

K.J. Noh
K.J. Noh is a peace activist and journalist and scholar specializing in the geopolitics of the Asian continent. He writes for Counterpunch and Dissident Voice. He is special correspondent for KPFA Flashpoints on the Pivot to Asia, the Koreas, and the Pacific.