Book Review: ‘The Other Side of the Story: A Secret War in Hong Kong’

The Other Side of the Story: A Secret War in Hong Kong
By Nury Vittachi
YLF Hong Kong, 2020
484 pages

Nury Vittachi’s The Other Side of the Story: A Secret War in Hong Kong is much needed expose of what really happened in Hong Kong.

Originally from Sri Lanka, Nury Vittachi has been a journalist in Hong Kong for decades.  He has contacts at all levels of society and knows the Hong Kong world inside out. He recounts exactly what happened in the Hong Kong protests of 2019-2020, what different people from students, parents, business people, government officials, ordinary workers, peaceful protesters, violent rioters, police officers, taxi drivers, and anyone you can imagine said and did during those days.

You get the full range of views. For example, one source warned him against reporting protester violence that he witnessed by saying, “The VRs (violent radicals) read your story. … They found a picture of your face and put it on a couple of the black shirts’ forums. You are dead meat, my friend.” Another source complained of protesters displaying pictures of Donald Trump by saying, “We in Hong Kong have told Xi Jinping to keep his hands away so that we can solve this problem by ourselves.  He has kept his mitts out so far. And then we ran to place it in the hands of Donald Trump.”

Step by step, everything they predicted came true, exactly as they predicted; because this was a standard formula, a strategy, of uprisings funded and manipulated by the U.S. National Endowment for Democracy (NED) and other U.S. agencies.
Vittachi explains in great detail the sequence of events, the originally proposed extradition law, the withdrawal of it, the increasing demands of the protesters, the escalation to violence, how it was manipulated by U.S. money and Western agents behind the scenes, how this was eventually exposed, and the biggest episodes of violence, including the capture and torture of a reporter at the airport, the pouring of gasoline on a man and setting him on fire, the bricks, firebombs, bows and arrows, and other weapons used by the rioters, and the tactics police used in response that after a year bought the riots to an end without killing even one person.

Well documented is the consistent denial of the Western media to tell the world how violent the “peaceful democracy protesters” were.  All of this was known to us Chinese in the States, but was covered up by the Western media until the later stages of the uprising, when the violence became so great they could no longer deny it. The Western media falsely purported to speak for ordinary Chinese, yet never reported the numerous mass demonstrations of thousands of Hong Kong citizens in support of the Hong Kong government.  Meanwhile, those of us in the Chinese community were hearing stories from friends and family in Hong Kong and seeing videotape of “peaceful democracy” rioters beating up civilians who verbally disagreed with them, smashing stores related to China or unsupportive of the protesters, setting fires in subway stations, killing a senior citizen with a brick, and throwing thousands of firebombs. We were angered by the American and Western media cover ups, but struggled to get the truth out. 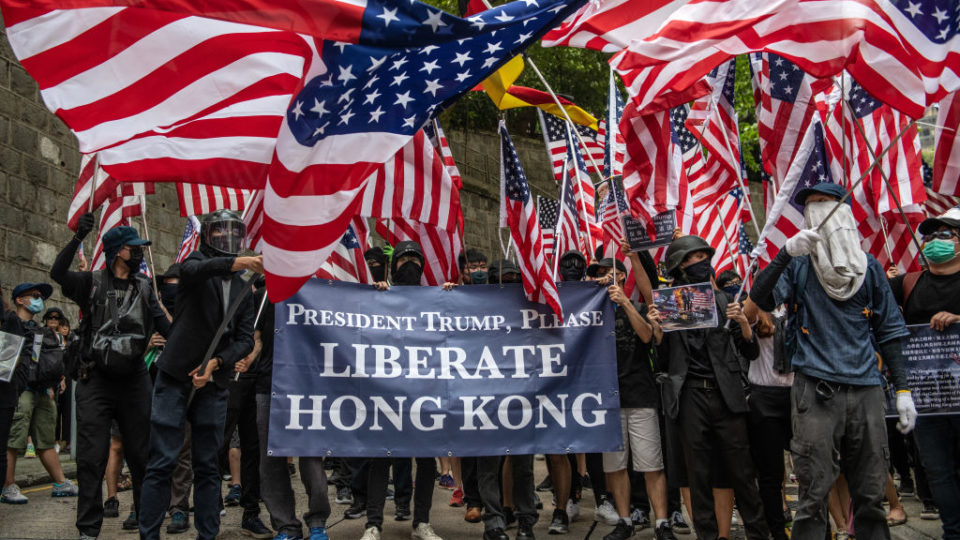 Finally, this book tells the Chinese side of the story.

This is a story of high drama, but it’s also important political and historical reporting of international significance.  This is where the story gets personal for me. In early 2019 a friend of mine, retired judge Julie Tang, told me that American media was falsely reporting the Hong Kong protests.  She said, contrary to U.S. news reports, that the extradition law being proposed there was not to extradite political dissidents, but rather that Hong Kong wanted to extradite a murderer who killed his girlfriend while in Taiwan, chopped her body up and packed it in her suitcase, then escaped to Hong Kong. Hong Kong wanted to extradite him back to Taiwan.  The law specifically excluded political crimes and required Hong Kong laws and courts to approve any extradition.  After researching the issue with Judge Tang and other sources both Chinese and Western, I wrote an article highlighting the inaccurate Western reporting: https://www.blackstarnews.com/global-politics/asia/what-many-us-corporate-media-hide-about-hong-kong-crisis.html .

Shortly after Judge Tang’s warning, two friends of mine with extensive knowledge of the similar protests in Nicaragua the previous year warned me that the protests in Hong Kong was a “color revolution” engineered by the United States. The first was Sgt. Camilo Mejia, originally from Nicaragua, a U.S. Army Iraq war combat veteran and war resister, and author of the book, “Road From Ar Ramadi.” The second friend was retired U.S. Army Colonel Ann Wright, who after retiring from the U.S. Army joined the U.S. State Department, but resigned in protest to the Iraq war and authored the book, “Dissent: Voices of Conscience.”  They each predicted step by step what stages and actions the protests would proceed by.  Step by step, everything they predicted came true, exactly as they predicted; because this was a standard formula, a strategy, of uprisings funded and manipulated by the U.S. National Endowment for Democracy (NED) and other U.S. agencies, and following a standard pattern.  Anyone can search the NED website and see the hundreds of thousands of U.S. dollars contributed to these uprisings each year.

Nury Vittachi’s book, therefore, is a detailed chronicling of exactly how these U.S. engineered “color revolutions” play out. The United States is waging similar wars in Southeast Asia and around the world, so this book is both a warning and a record of how to defeat American subversion.

Protesters set a man on fire

Michael Wong
Michael Wong is the vice president of Veterans For Peace, Chapter 69, San Francisco, and a retired social worker with a Master of Social Work degree. He is published in the anthologies, Veterans of War, Veterans of Peace, edited by Maxine Hong Kingston, and Waging Peace in Vietnam, edited by Ron Carver, David Cortright, and Barbara Doherty. He also appeared in the documentary Sir! No Sir! about GI resistance to the Vietnam War.