Through the Years, GI and Veteran Resistance

TThe beginnings of the Viet Nam GI antiwar movement can be traced back to 1945, when U.S. Merchant Marines were used to transport French troops to Viet Nam instead of bringing U.S. troops home from the Pacific Theater and WWII.

Every crewman on the ships signed petitions to Congress and the President condemning the U.S. government for participating in imperialist policies designed to subjugate the native population of Viet Nam.

By the end of the U.S. involvement in Indochina, estimates are that 2,709,918 U.S. troops were in Viet Nam at some point. Between 1 million and 1.6 million either fought in combat, provided close support or were regularly exposed to attack.

I heard their cries of pain; their limbs held aloft by butcher-like hooks used to elevate a leg or arm with large open wounds, oozing infection … . I could no longer be silent about the war and joined the GI and Veterans March for Peace.
During the 1960s GI Resistance began with individual acts of conscience. There were too many to mention here, but there are some of particular importance—their actions were noticed and inspired other activists.  In El Paso, Texas, Lt. Henry Howe joined a small group of civilian peace demonstrators and carried a sign: “End Johnson’s Fascist Aggression in Vietnam.” He was court-martialed and sentenced to two years hard labor.

In the summer of 1966, three Army privates—JJ Johnson, David Samas and Dennis Mora—stationed at Fort Hood in Texas refused their orders to Viet Nam. They defended the right of “cannon fodder” to speak out and denounced the war. Their statement read: “We represent in our backgrounds a cross-section of the army and America—Black, Lithuanian-Italian, and Puerto Rican. We have decided to take a stand against this war, which we consider immoral, illegal and unjust.” Their statement ended, “We want no part of a war of extermination. We oppose the criminal waste of American lives and resources. We refuse to go to Vietnam!” 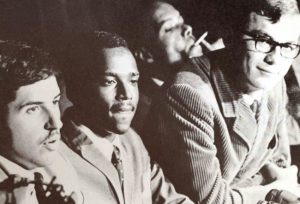 The following year, 1967, when I was at officers indoctrination school in Rhode Island, Dr.Howard Levy, a dermatologist, and captain in the army, refused to teach  medical skills to the Special Forces troops scheduled to be sent to Viet Nam. Levy stated that he was justified in refusing to train U.S. Green Berets because they were committing atrocities in the Viet Nam War in violation of international law. Levy was court-martialed and sentenced to three years confinement at hard labor at Fort Leavenworth.

During 1967 additional active-duty soldiers protested the war in Viet Nam. Some went to prison for several years, some left their families and friends, their known lives, to move to Canada or Sweden, giving up everything.

On April 15, 1967, an antiwar march to the United Nations Plaza with more than 400,000 people included a group of young men with a banner reading Vietnam Veterans Against the War. In November of that year VVAW placed an ad in The New York Times reading: “We know, because we have been there, that the American public has not been told the truth about the war or about Viet Nam. We believe that the true support for our buddies still in Vietnam is to demand that they be brought home before anyone else dies in a war the American public did not vote for and do not want.”

In May 1968, when the United States sat down to the Paris Peace Talks, 30,000 U.S. troops had already died; and millions of Vietnamese had been killed—including over 500 civilians murdered outright in a town called My Lai. There were many other My Lais.

In the summer of 1968, the Chicago police rioted during the Democratic National Convention; 43 soldiers from Ft. Hood refused orders to be deployed to repress peace demonstrations at home. U.S. troop numbers peaked in 1968 at 549,500. 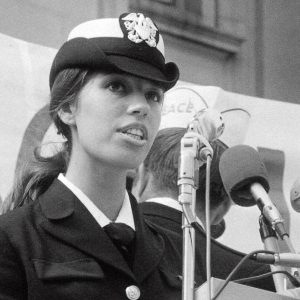 Susan Schnall, speaking at an antiwar rally in 1968.

In 1968 I was a Navy nurse at Oak Knoll Hospital, assigned to the surgical and orthopedic wards—all young men who had been wounded in Viet Nam. I heard their cries of pain; their limbs held aloft by butcher-like hooks used to elevate a leg or arm with large open wounds, oozing infection—pus and blood mixed together in stumps that would always remind them of their war and loss. I could no longer be silent about the war and joined the GI and Veterans March for Peace. We had difficulty distributing the flyers on military bases. The U.S. military was dropping leaflets on the Vietnamese urging them to go to “protective hamlets” to avoid the bombings in southern Viet Nam. If the United States could drop flyers for the war in a country 8,000 miles away, then why couldn’t we drop flyers against the war in the United States? A friend who was a pilot rented a one-engine plane and we filled it with leaflets announcing the GI and Veterans March for Peace. We dropped them on five military bases in the San Francisco Bay Area: Oak Knoll Naval Hospital, Treasure Island, Yerba Buena Island, the Presidio, and then we flew into Alameda Naval Air Station and dropped them on the deck of the USS Ranger aircraft carrier. Two days later I marched in uniform and spoke out against the war in Viet Nam, and about supporting the troops by bringing them home. I was tried by a general court martial board and sentenced to six months confinement at hard labor.

Another active-duty participant in that march was Randy Rowland, who, despite orders to remain on base, went AWOL and marched with the demonstrators to the gates of the Presidio Army base where he was arrested and placed in the stockade. On Monday, October 14, 27 prisoners, in protest of brutal prison conditions and the shooting of fellow prisoner Richard Bunch, sat down and sang “We Shall Overcome.”  In response, the military charged them with mutiny.

They each faced a sentence of life in prison.

The GI movement reflected the war at home and the war abroad—from  civil rights and Black Power to students marching in protests to military prisons and bases beset with fires and rampaging GIs fighting against brutal racist attacks. It was a movement that began in the 1960s with individual acts meant to inform the American public that not everyone in the military supported the war in Southeast Asia. It forced the government to move from an army with boots on the ground to primarily an air war, dropping more tonnage of bombs and chemical weapons on Viet Nam than was used during all of World War II on Germany and Japan—on a country the size of Rhode Island. And it failed.

As the war moved from boots on the ground to the use of aircraft carriers and B-52s dropping bombs, so too the GI resistance changed. GI antiwar underground papers increased in the Navy and Air Force.

Resistance in the Air Force reached its peak during the latter stages of the war as the United States multiplied its bombing campaigns and the GI resistance undermined American military capabilities, and forced the Air Force to curtail operations. In May 1973 the Pentagon announced that B-52 missions over Cambodia were reduced by 40%. From 1969 to 1972, ground troops were reduced from 549,00 to 69,000; January 1973 was the end of military draft.

The Agreement on Ending the War and Restoring the Peace was signed in Paris on December 27, 1973, with removal of the last U.S. troops April 30, 1975.

Many GIs and veterans who returned from war, armed conflict, and military service turned instead to work for peace and justice. For them it’s been a wrenching, painful journey from warmaker to peacemaker, to be able to question both themselves and their country, which continues to participate in unjust, immoral conflicts at home and abroad.

Some of us have been working for over 50 years on peace and reconciliation, recognizing the triplets of evil put forth by Martin Luther King: militarism, materialism, racism/sexism/misogyny. We’ve been to the wars in this country and abroad—we recognize our common enemy: corporate greed, systemic racism, U.S. world domination. We’ve learned that the enemy is not each other—the enemy is much stronger and wealthier than we are. We must not let minor issues and egos prevent us from working together effectively. We need to value our history, learn from each other, and move toward our common cause, defeating those triplets of evil.

‘What are soldiers?’
‘They are for war. They fight and each tries to kill as many of the other side as he can.’
The girl held still and studied.
‘Do you know … I know something?
‘Yes, what is it you know?’
‘Sometime they’ll give a war and nobody will come.’
—excerpted from Carl Sandburg’s poem “The People, Yes” (1936)

Susan Schnall is president of New York City Veterans For Peace. She served as a nurse in the Navy during the Vietnam War and was court-martialed for her antiwar activities. She is the co-coordinator of the Vietnam Agent Orange Relief and Responsibility Campaign and an assistant professor at New York University.