Anniversary of Infamy on Russiagate

A loud guffaw at the pretentious slogan All the News That’s Fit to Print! November 7, 2022, marks a milestone (millstone?) for the New York Times. This morning it can smugly celebrate success in hiding for 30 months horse’s-mouth evidence putting the lie to its “Russia-gate” yarn that Russia hacked Democratic National Committee emails to help Donald Trump win in 2016. (The evidence was released on May 7, 2020; before that, Adam Schiff had been able to hide it for only 29 months.)

The emails showed how the DNC had tipped the playing field against candidate Bernie Sanders for the nomination. Someone gave them to WikiLeaks, which posted them just days before the Democratic National Convention. Court testimony has now made it demonstrably clear that that “someone” was not Russia, but this has been kept out of the corporate media. Russian DNC-hacking was all a fake, and “important” people knew that five years ago, but have been able to suppress it.

In an attempt to distract voters from details on how the Clinton campaign had severely disadvantaged Sanders, the Democrats and their co-travelers in the Deep State blamed the so-called “hack” on Russia. And court testimony over recent months has proved what many of us suspected; namely, that President Barack Obama, as well as candidate Hillary Clinton, were in it up to their ears. (More on the involvement of Obama and his lieutenants below.)

Suffice it to remind that, in addition to distracting attention from the damning information in the emails, the hacking accusation dovetailed nicely with efforts already under way to (a) put Trump into “Putin’s pocket”; and (b) raise the specter of an aggressive Russia, in order to facilitate profiteering by the MICIMATT (Military-Industrial-Congressional-Media-Academia-Think-Tank) complex – always in need of a menacing enemy.

What! No Russian Hack?

Check with your neighbors. I’ll wager that 80 percent still believe the Russians hacked the DNC to help Trump win. Why is that? Well, the head of the House Intelligence Committee, Adam Schiff, in cooperation with the New York Times, has suppressed the truth for almost five, count them – 5 years.

I gave the play-by-play on May 7, 2022, in Only If the News Fits, Do We Print, writing on the 2nd anniversary of the NYT suppression of that key evidence, so I need not go into gory detail here. I’ll just draw from earlier work, and put it together with more recent revelations.

All in the (FBI) Family

Shawn Henry, head of CrowdStrike, the cyber firm to which then-FBI Director James Comey, for some reason, deferred to perform the forensics on the DNC computers, was also a longtime protégé of former FBI Director Robert Mueller. On December 5, 2017 Mr. Henry gave sworn testimony to the House Intelligence Committee that there was no technical evidence that Russia, or any other entity, hacked the DNC emails that were published by WikiLeaks just before the Democratic Convention in July 2016. (Incidentally, the Justice Department has reported that CrowdStrike never produced an un-redacted or final forensic report on the DNC email theft, because the FBI never required it to.)

A newly appointed Director of National Intelligence forced Adam Schiff (D, California), chair of the House Intelligence Committee, to release Shawn Henry’s sworn testimony on May 7, 2020. Mr. Henry swore that there was zero technical evidence that Russia – or anyone else – hacked the DNC emails published by WikiLeaks. Here’s Henry:

This strongly suggests that someone with access to DNC computers “set up” selected emails for transfer to an external storage device – a thumb drive, for example. The Internet is not needed for such a transfer. Use of the Internet would have been detected, enabling Crowdstrike to pinpoint any “exfiltration” over that network.

Veteran Intelligence Professionals for Sanity, relying on (1) the extensive expertise and professional experience of two members who happened to have been Technical Directors at NSA, (2) the revelations of Edward Snowden, and (3) the immutable principles of physics, had concluded – a year before Shawn Henry came clean – that the accusation of that Russian hack on the DNC was phony.

In our Memorandum of Dec. 12, 2016, Allegations of Hacking are Baseless, we wrote:

A New York Times report on Monday alluding to “overwhelming circumstantial evidence” leading the CIA to believe that Russian President Vladimir Putin “deployed computer hackers with the goal of tipping the election to Donald J. Trump” is, sadly, evidence-free. This is no surprise, because harder evidence of a technical nature points to an inside leak, not hacking – by Russians or anyone else.

We even included a brief tutorial on the difference between a “hack” and a leak, but we were already, in Dec. 2016 going up against deeply encrusted popular “belief” based on intelligence-corporate media connivance.

Even President Obama, who we now know was knee-deep into this operation, felt it wise to admit, two days before leaving office:

“The conclusions of the intelligence community with respect to the Russian hacking were not conclusive as to whether WikiLeaks was witting or not in being the conduit through which we heard about the DNC e-mails that were leaked.” [Emphasis added]

One needs to carefully parse lawyer Obama’s words. He offered a similarly hedged comment at a Dec. 16, 2016 press conference when he said: “based on uniform intelligence assessments, the Russians were responsible for hacking the DNC. … the information was in the hands of WikiLeaks.” I pointed at the time to:

The disconnect between the professed confidence about Russian hacking and the stark declarative sentence about the information ending up at WikiLeaks. Obama does not bridge the gap because – as we now know – he already knew that would be a bald-faced lie, which some honest intelligence officer might call him on. So, he simply presented the two sides of the chasm – implies a connection – but leaves it to the listener to make the leap.

We now know from more recent court testimony that Obama was actually promoting the “Russian-hack” ruse from the start. In early fall 2016, he ordered National Intelligence Director James Clapper and Department of Homeland Security Secretary Jeh Johnson to prepare a paper accusing Russia of the DNC hack even before input from CrowdStrike.

On Oct. 7, six days before CrowdStrike agreed to mail the DNC server images to the FBI, the Department of Homeland Security and the Office of the Director of National Intelligence released a statement accusing Russia of hacking U.S. political organizations and disseminating emails allegedly stolen through the hack. The statement was approved and encouraged by Obama, according to then-DHS Secretary Jeh Johnson, who, somewhat defensively added:

“The president approved the statement. I know he wanted us to make the statement. So that was very definitely a statement by the United States government, not just Jim Clapper and me,” Johnson told the House Intelligence Committee in June 2017, referring to then-Director of National Intelligence James Clapper. Yes, the same Clapper who admits in his memoir that, while head of imagery analysis before the attack on Iraq in 2003, he was so eager to help [fortify the administration narrative of WMD] that “we found what wasn’t really there.”

As one wag wryly commented, the lack of server images at the time the statement was released highlights the question of what the intelligence community used to establish Russia’s involvement. Duh. 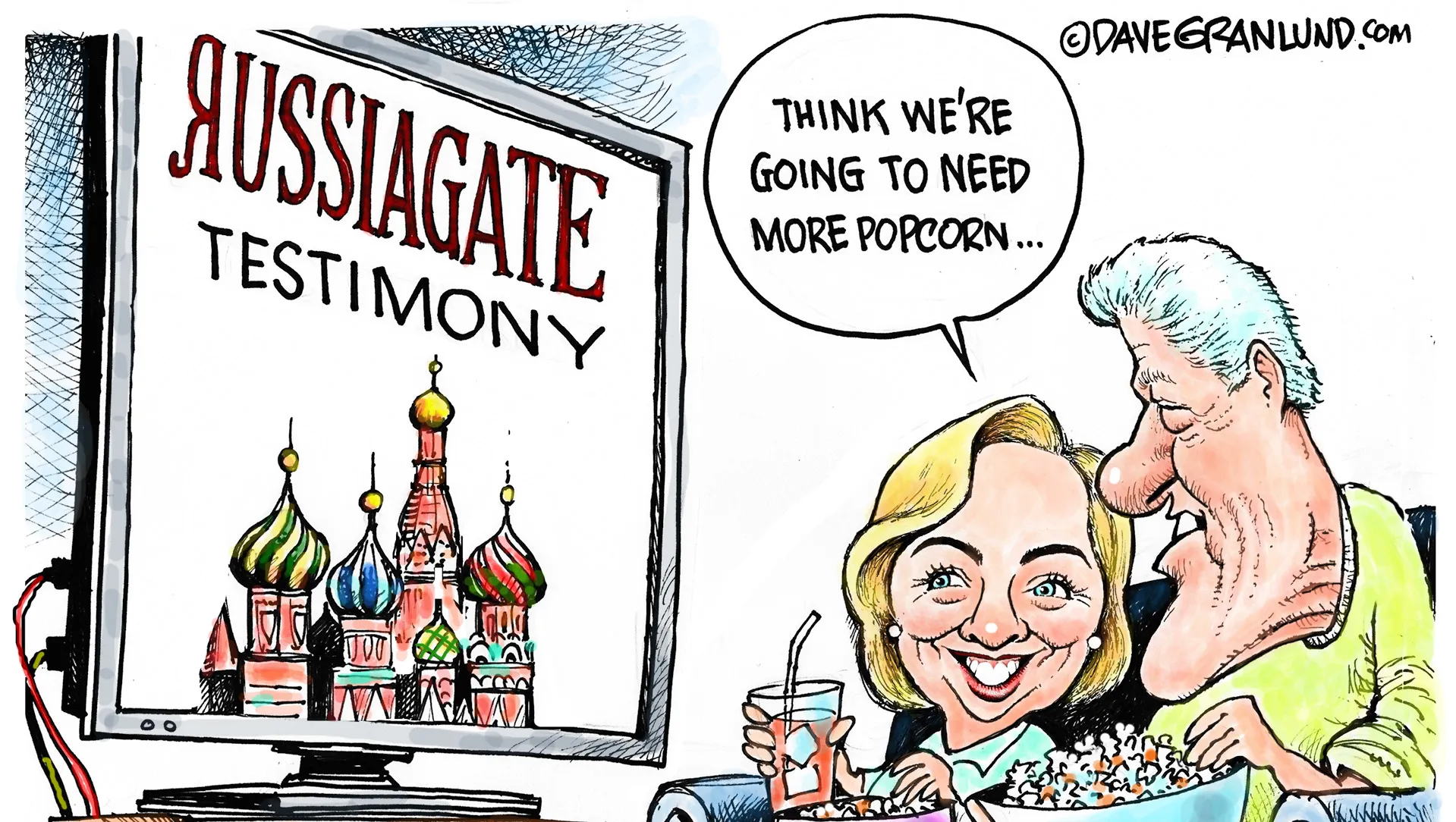 Again, thanks to court-related documents, we now know that in the months before the election candidate Clinton personally approved the ruse involving alleged Trump campaign ties with Russia’s Alfa Bank. This one left even the technical people trying to manufacture a convincing case, holding their collective noses.

Finally, I confess. After super-sleuth Peter Strzok confessed that “there is no there there” on Russia-gate, it was hard for me to understand why, nevertheless, Robert Mueller persisted.

Duh!. The game was to keep the Russia-gate cloud over Trump until after the midterms four years ago. For the Dems, it worked beautifully. You know the rest of the story.

Russia-gate: Can You Handle the Truth? This is the title I gave to a talk to a large progressive group in Seattle on August 4, 2018:

Raymond McGovern is a former Central Intelligence Agency (CIA) officer turned political activist. McGovern was a CIA analyst from 1963 to 1990, and in the 1980s chaired National Intelligence Estimates and prepared the President’s Daily Brief. He received the Intelligence Commendation Medal at his retirement, returning it in 2006 to protest the CIA’s involvement in torture. McGovern’s post-retirement work includes commenting for Consortium News, RT, and Sputnik News, among other outlets, on intelligence and foreign policy issues. In 2003 he co-founded Veteran Intelligence Professionals for Sanity (VIPS). His website is https://raymcgovern.com/