Roger Waters tour is a cultural high point for Palestine

A few years ago it felt like Roger Waters might be blacklisted over his support for Palestine. But this summer he is filling stadiums around the country talking about Palestinian liberation.

When Roger Waters played his song “The Powers That Be” at Madison Square Garden, my friends and I got out our cell phones because we knew that Shireen Abu Akleh’s name was about to be broadcast on the giantest screens that have ever been squeezed into a concert hall, and soon enough we snapped away. Shireen Abu Akleh, alongside Breonna Taylor and George Floyd.

That was hardly the only reference to Palestine. We saw the apartheid wall snaking through occupied territories. We saw the words Palestinian Rights. And Yemeni and Indigenous rights too.

A few years ago all this was in doubt. Opposition to Waters’s advocacy was fierce and reminiscent of the fury that rocked Vanessa Redgrave’s career for years. He was smeared as an antisemite because he stood up for Palestinian rights. I wondered whether he was going to be blacklisted by promoters and venues. There were demonstrations outside his 2018 tour events. It was clear that Waters’s treatment chilled other performers, watching a legend struggle to stand against Zionist hoodlums. 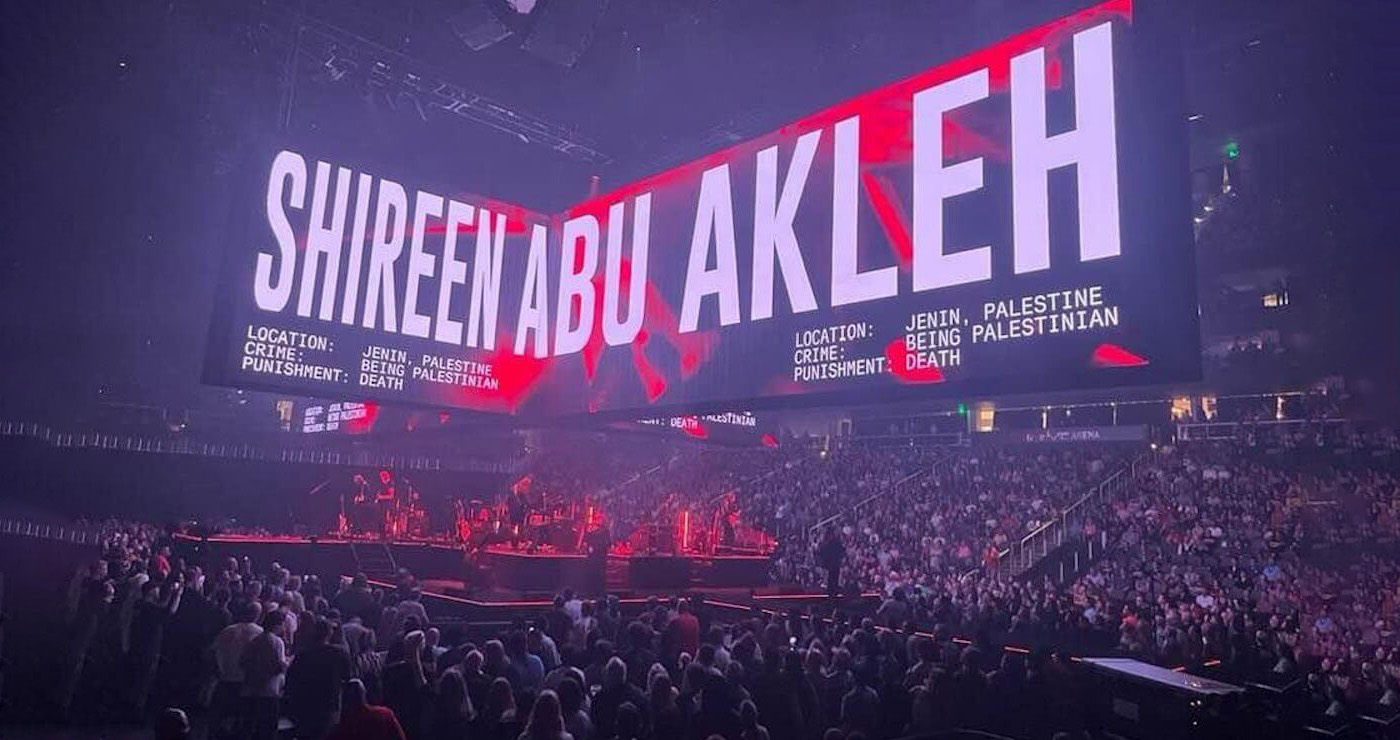 I’m told there were demonstrators outside Madison Square Garden last Wednesday, but the feeling this time round is completely different. The show is more political than Waters’s last tour. It begins with that brilliant quip from Waters, “If you’re one of those ‘I love Pink Floyd, but I can’t stand Roger’s politics’ people, you might do well to f— off to the bar right now. Thank you.”

Waters stands up for Julian Assange as a journalist, airing the footage of the civilians killed by a helicopter gunship in Baghdad that we only know about because of Assange, and assails Barack Obama and Donald Trump and George W Bush as war criminals.

This is great political theater, performed for huge crowds in our largest halls, and despite those who are tired of Waters’ politics, there was a lot of applause for his commentary last Wednesday night. And when I saw Waters speak in March in Washington, he made gleeful sport of the other musicians who have ignored his pleas not to play Israel and normalize apartheid.

I like to believe that Waters’ successful tour is part of the sea change that the Palestinian cause is undergoing in the U.S. Just check out the review in the Times of Israel. It was very important to the newspaper to get the word “Jew Hater” in the headline. The correspondent was obviously sent to the Garden with the goal of describing the antisemite’s latest act. But Jordan Hoffman found no evidence of antisemitism and was thrilled by the show (“as entertainment, it was incredible. I don’t think I’d seen anything that flashy in my life. The sound was immaculate, too”).

Waters loves performing and loves his audience
Putting on my other hat, of music-lover, I share that view. It’s a great tour. Waters had equal parts of Pink Floyd hits and more recent hits, like “Deja Vu” and “Is This the Life We Really Want?” Waters supports this site, so mine is hardly an unbiased view, but it is remarkable to see a man in his late 70s who has been so creative and experimental for 60 years continuing to carry on at such a high level. In puzzling that out, I would say the secret is that Waters loves performing and loves his audience, and that feeling comes through in his every motion, and the fans respond with adoration. He’s not crowdpleasing, and he’s never Talking Down. He is exposing the depths of his mind and trusting his audience to hear him and when they respond, he pours out more. That generosity of spirit extends to a number of artists Waters mentions in the show. From Syd Barrett, his star-crossed partner in the formation of Pink Floyd, to Bob Dylan to great early rocker Gene Vincent to the Rolling Stones– Waters is open about his debt to other musicians and his gratitude for them. It’s not something you see at most shows.

Nor of course is Palestine. How bracing to hear that word so many times at a major American concert. Let’s hope it’s a trend.

Image of Apartheid Wall displayed during song, “Us and Them”

Philip Weiss is an American journalist who co-edits Mondoweiss, a news website devoted to covering American foreign policy in the Middle East, chiefly from a progressive Jewish perspective. Weiss describes himself as an anti-Zionist and rejects the label “post-Zionist.”