The North Atlantic Right Whale may have just been fast-tracked irreversibly towards extinction. And it matters.

Whales, those creatures from the ocean realm, amazing in the sheer awesome size of their immense bodies, their incredible beauty, the complexity of their various vocalizations and cultures, with the secrets and mystery they carry, have captivated the imaginations and hearts of many. It is good knowing they are here on this Earth.

But, to put it mildly, humans have not always treated them kindly over the centuries, and still to this day. We need to rethink what we are doing to whales, not only for the sake of the whales, but for all, including humanity.

So aside from all the beauty, inspiration, and mystery they provide us with, there are other really good reasons for humanity to take seriously the need to recover whale populations. But we are not doing a very good job of it.

Things have been looking pretty bleak for this whale in recent years. The species has seen an alarming decline in its numbers; It once numbered in the tens of thousands, but the most recent estimate is that there are only 340 left on the planet, and they are being injured and killed by humans far faster than they can reproduce.

North Atlantic Right Whales, one of Earth’s most critically endangered large whales, have never been given an opportunity to recover from whaling. They were considered the “right” whale to kill and were almost totally wiped out. Right (and other) whales keep on being injured and killed from vessel strikes and entanglements in fishing gear. Entanglements are the leading cause of death in Right Whales. 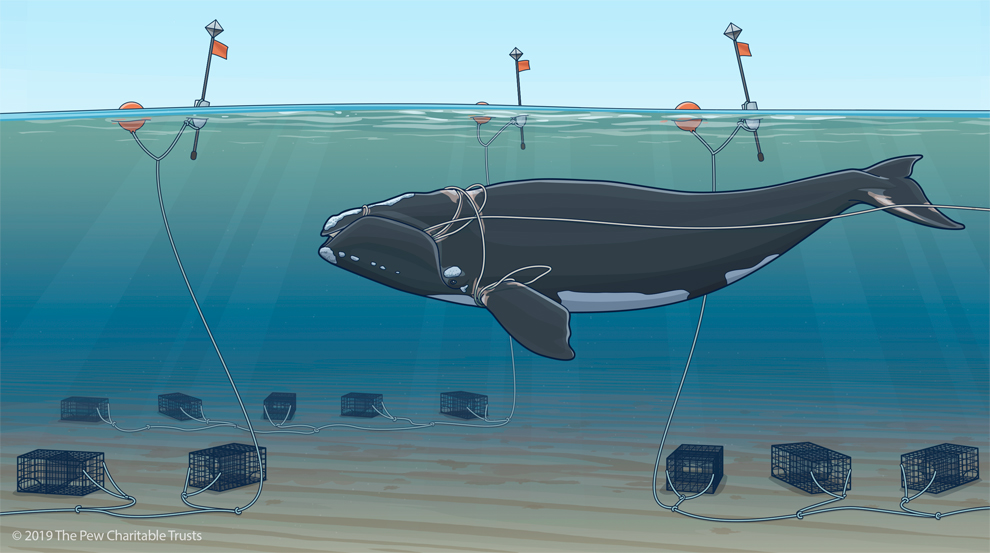 Entanglements entail immense pain and suffering for the whales who are unfortunate enough to experience it. Amy Knowlton, a senior scientist at the New England aquarium who has been studying Right Whales for nearly 40 years says, “it is a heartbreaking sight to see as they often are under significant stress, frantically thrashing and desperately trying to shake the gear off their bodies.”

Michael J. Moore, a veterinary scientist at the Woods Hole Oceanographic Institution writes in his book We Are All Whalers, “As a scientist, I know that it is beyond urgent that we introduce much more widespread measures to mitigate large whale trauma caused by vessels and fishing gear. As a veterinarian, I see the often long, drawn-out trauma to individual Right Whales caused by ropes from fishing gear as utterly unacceptable. Do we all have the individual and political will to make it right?”

Unfortunately, the federal agency that is responsible for protecting marine species, the National Marine Fisheries Service (NMFS) doesn’t. It has done a remarkably poor job of fulfilling that responsibility when it comes to Right Whales, only moving to protect these whales when forced to by litigation from environmental groups, and the protections offered were always too little, too late. In his 2017 book, now-retired U.S. Marine Mammal Commission policy analyst David Laist wrote that it “seemed more intent on ensuring no fishing opportunity would be lost than on protecting whales.” And so, the agency’s failure to protect Right Whales has been continuing for decades now; one of the main reasons Right Whales are at the threshold of extinction.

In 2021, following years of litigation (ongoing today), NMFS finally came out with new regulations to reduce entanglement-caused injuries and deaths of Right Whales. However, last July, the federal judge rightly ruled that those regulations very clearly had seriously violated both the Marine Mammal Protection Act (MMPA) and Endangered Species Act (ESA) in that they would still not adequately protect Right Whales. This past November he gave NMFS two years to come up with a new set of regulations that would actually meet the requirements of the MMPA and ESA and give Right Whales a genuine chance of avoiding extinction.

Following the court’s decision, lobster lost its “sustainable” certification from several prominent sustainable-seafood guides, further enraging the industry and Maine politicians, including Maine’s entire congressional delegation and governor. To say this issue is on fire is an understatement.

Needless to say, this has been a highly contentious issue in some places…particularly in the state of Maine. The Northeast lobster fishery accounts for 93% of U.S. buoy lines in Right Whale habitat, with the greatest density in waters off the Maine coast. It is these vertical lines which entangle right (and other) whales.

This is where things get complicated. Between 1980 and 2019, more than 1,700 Right Whale entanglements have been documented. Yet, due to historically lax gear-marking requirements and a low rate of gear retrieval from entangled whales, scientists can only determine the region where the entanglement occurred and specific fishery’s gear in less than 2% of documented cases.

Let me restate that, because it’s really important to understand: In more than 98% of documented entanglement cases, it is impossible to determine the region where the entanglement occurred, and which fishery’s gear was responsible.

Maine’s lobster industry and politicians make use of this uncertainty regarding the source of entangling gear to make the claim that the Maine lobster industry isn’t part of the problem, despite the fact that Right Whales have been documented entangled in Maine lobster gear and that the waters off of Maine have the greatest density of vertical lines in U.S. waters in Right Whale habitat! They also fail to mention that the Maine delegation and lobster industry fought against gear-marking requirements for years further exasperating the problem. Until September 2020, federal and state regulators had never required gear markings on lobster buoy lines in most of Maine’s waters.

Since 2020, NMFS has documented that Maine lobster gear has entangled at least seven minke and humpback whales, some of which died as a result. The industry and politicians ignore these facts and insist that the Maine lobster fishery plays no part in the Right Whale’s decline. Denial runs very deep in Maine.

There is so much tension around this issue that one Maine lobsterman, who, in 2019 was on the team of stakeholders that advise NMFS on ways to reduce entanglements, had some of his gear cut after he voted in favor of a proposed measure that would have helped do that. Other Maine lobstermen have been threatened with gear or boat loss for being willing to try out a quickly developing technology called ropeless, or on-demand gear, which, because it does away with the persistent buoy line, would greatly diminish the chances of a whale becoming entangled.

This brings us to the present. Recently, we learned that Maine’s Senator Susan Collins quietly proposed language, with backing from the rest of the Maine delegation and governor, for the Omnibus spending bill that, if adopted, will simply nullify the court’s decision. It would in effect, proclaim that the 2021 regulations are somehow magically in compliance with the MMPA and ESA at least for the next 6 years. She might as well have proclaimed that extinction is sustainable and war is peace!

The Omnibus bill is expected to be voted on very soon. “If this rider goes through, there will be blood on the hands of Maine politicians,” said Erica Fuller, a senior attorney at the Conservation Law Foundation, one of the plaintiffs in the ongoing lawsuit. “With the rate we’ve been killing Right Whales, extinction is expected to occur between the next 20 to 40 years. In the absence of the new rule, we’ve got more years of unsustainable killing going on.” 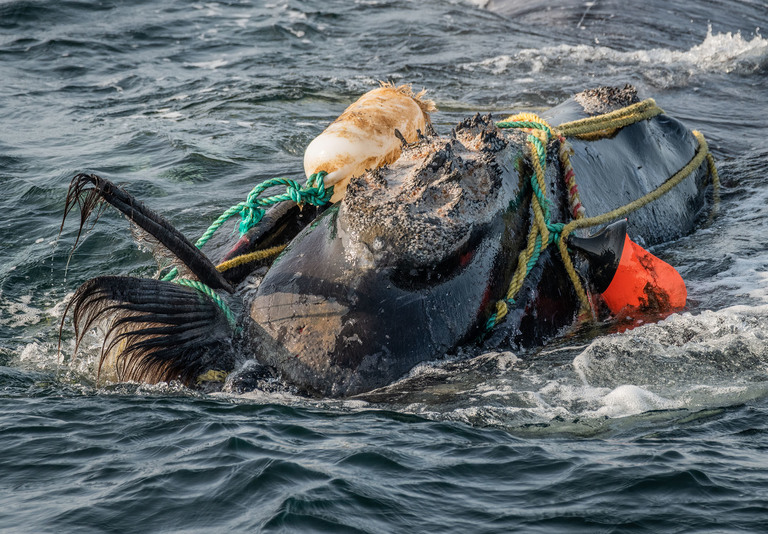 Annie Clark, a spokeswoman for Senator Collins stated “these environmental groups are seeking actions that would end lobstering in Maine.” These kind of accusations, that those who are trying to protect whales want to shut down fisheries, though frequent, are simply not true. In fact, it is almost universally held that federal and state governments should give financial and other forms of assistance to speed up the development and production of whale-friendly gear, including ropeless gear, and to generously assist fishermen and women in making necessary changes that would reduce, and ultimately end entanglements. Both whales and fisheries can, and should, co-exist… and flourish.

Beyond paving the way to Right Whale extinction, Collin’s rider, if passed, will have set an extremely dangerous precedent for laying waste to environmental laws and the protections they provide that are so desperately needed at this time on the planet.

In his book, Michael J. Moore asks the question; “What if we lose the North Atlantic Right Whale species? It would be another nail in the coffin of the human species. If we continue to destroy biodiversity, what kind of world will be left for us to survive in? It is an ethical, moral, and practical necessity that humans stop destroying and overexploiting the diverse resources of the globe. If we do not, we will loose a species that is an icon, just like the lobster, snow crab, and cod. Furthermore, whales are an important ocean resource: they recycle nutrients from the seafloor, fertilizing the food web that fish feed on, delight ecotourists on whale-watching cruises, and provide us with other services that we have no idea of. Their loss would doubtless have unintended consequences of which we are unaware. It’s up to all of us to decide if we care about sustaining a diverse and healthy planet”.

Truer words cannot be spoken… Somehow, this suffering and devastation must be stopped! 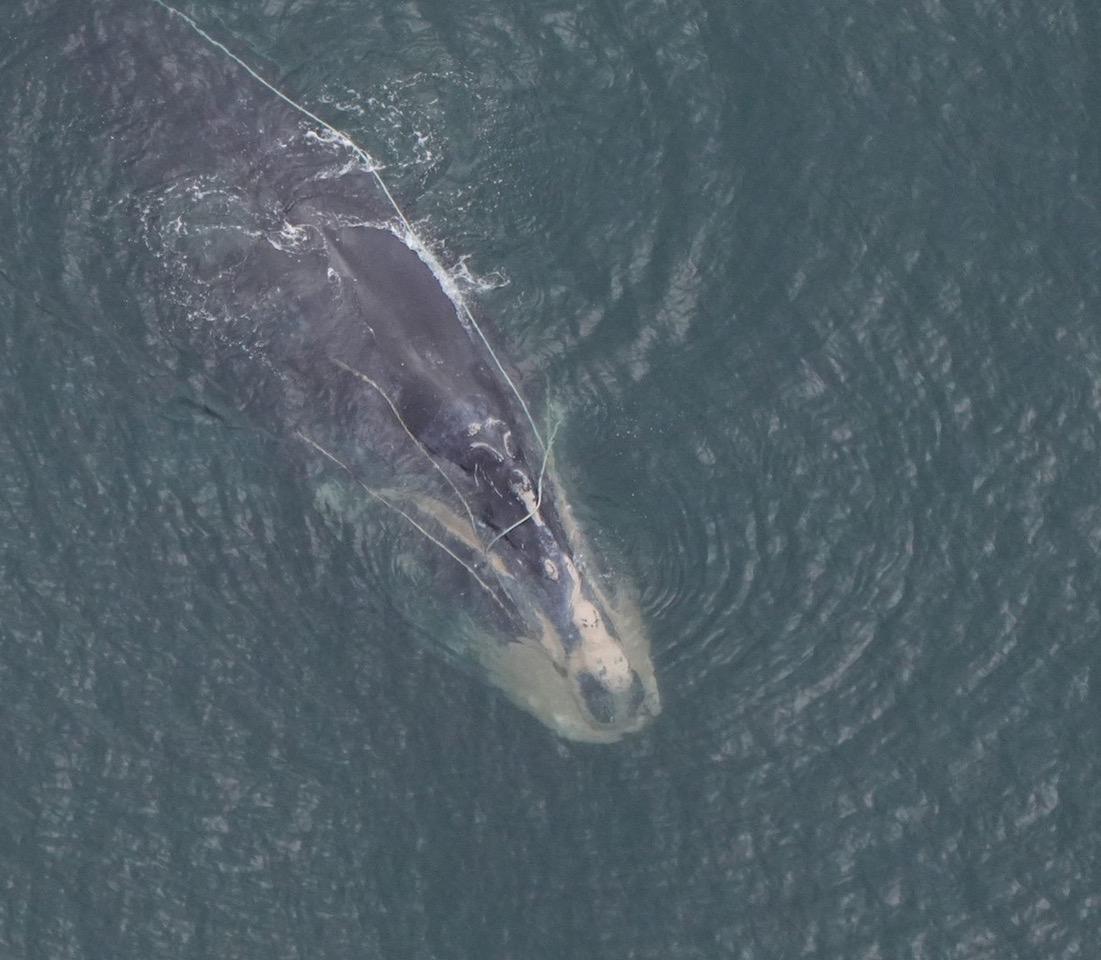 Snow Cone, who was recently spotted suffering from her fifth known entanglement is not expected to live long.

Russell Wray, an associate member of Veterans For Peace, is a sculptor/printmaker who grew up loving whales. It was whaling that first led him into becoming an activist, first as crew member on board Greenpeace ships and later as a founding member of Citizens Opposing Active Sonar Threats (COAST) and a part of the Maine Coalition for North Atlantic Right Whales.