Reckoning and Reparations in Afghanistan

The U.S. government owes reparations to the civilians of Afghanistan for the past 20 years of war and brutal impoverishment.

In July, 100 Afghan families from Bamiyan, a rural province of central Afghanistan mainly populated by the Hazara ethnic minority, fled to Kabul. They feared Taliban militants would attack them in Bamiyan.

Over the past decade, I’ve gotten to know a grandmother who recalls fleeing Talib fighters in the 1990s, just after learning that her husband had been killed. Then, she was a young widow with five children, and for several agonizing months two of her sons were missing. I can only imagine the traumatized memories that spurred her to again flee her village today. She is part of the Hazara ethnic minority and hopes to protect her grandchildren.

When it comes to inflicting miseries on innocent Afghan people, there’s plenty of blame to be shared.

The Taliban have demonstrated a pattern of anticipating people who might form opposition to their eventual rule and waging “pre-emptive” attacks against journalists, human rights activists, judicial officials, advocates for women’s rights, and minority groups such as the Hazara.

In places where Taliban have successfully taken over districts, they may be ruling over increasingly resentful populaces; people who have lost harvests, homes, and livestock are already coping with a third wave of COVID-19 and severe drought.

In many northern provinces, the re-emergence of the Taliban can be traced to the Afghan government’s incompetence, and also to criminal and abusive behaviors of the local military commanders, including land grabs, extortion, and rape.

President Ashraf Ghani, showing little empathy for people trying to flee Afghanistan, referred to those who leave as people looking to “have fun.”

Responding to his April 18 speech when he made this comment, a young woman whose sister, a journalist, was recently killed, tweeted about her father who had stayed in Afghanistan for seventy-four years, encouraged his children to stay, and now felt that his daughter might be alive had she left. The surviving daughter said the Afghan government couldn’t protect its people, and that’s why they tried to leave.

President Ghani’s government has encouraged the formation of “Uprising” militias to help protect the country. Immediately, people began questioning how the Afghan government could support new militias when it already lacks ammunition and protection for thousands of Afghan National Defense Forces and local police who have fled their posts.

The main backer of the Uprising Forces, it seems, is the formidable National Directorate of Security, whose main sponsor is the CIA.

Some militia groups have raised money through imposing “taxes” or outright extortion. Others turn to other countries in the region, all of which reinforces cycles of violence and despair. 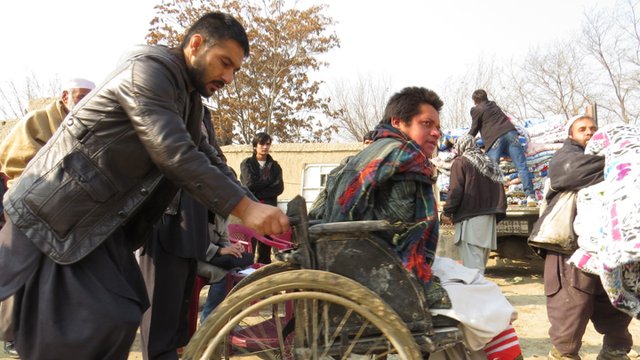 Disabled people from the war are a common sight across Afghanistan. Photo: Dr. Hakim

The staggering loss of landmine removal experts working for the nonprofit HALO Trust should add to our sense of grief and mourning. About 2,600 Afghans working with the demining group had helped make more than 80 percent of Afghanistan’s land safe from unexploded ordnance strewn over the country after forty years of war. Tragically, militants attacked the group, killing ten workers.

Yet, unquestionably, the warring party in Afghanistan with the most sophisticated weapons and seemingly endless access to funds has been the United States. Funds were spent not to lift Afghans to a place of security from which they might have worked to moderate Taliban rule, but to further frustrate them, beating down their hopes of future participatory governance with twenty years of war and brutal impoverishment. The war has been a prelude to the United States’ inevitable retreat and the return of a possibly more enraged and dysfunctional Taliban to rule over a shattered population.

The troop withdrawal negotiated by President Joe Biden and U.S. military officials is not a peace agreement. Rather, it signals the end of an occupation resulting from an unlawful invasion, and while troops are leaving, the Biden Administration is already laying plans for “over the horizon” drone surveillance, drone strikes, and “manned” aircraft strikes which could exacerbate and prolong the war.

U.S. citizens ought to consider not only financial recompense for destruction caused by twenty years of war but also a commitment to dismantle the warfare systems that brought such havoc, chaos, bereavement, and displacement to Afghanistan.

We should be sorry that, during 2013, when the United States spent an average of $2 million per soldier, per year, stationed in Afghanistan, the number of Afghan children suffering malnutrition rose by 50 percent. At that same time, the cost of adding iodized salt to an Afghan child’s diet to help reduce risks of brain damage caused by hunger would have been 5 cents per child per year. 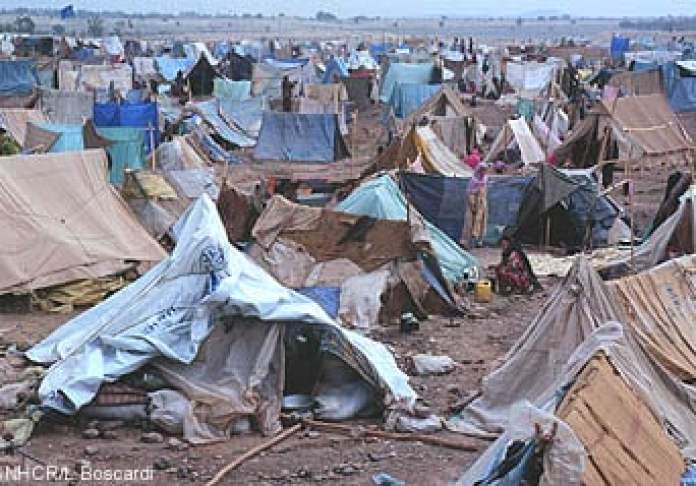 We should deeply regret that while the United States constructed sprawling military bases in Kabul, populations in refugee camps soared. During harsh winter months, people desperate for warmth in a Kabul refugee camp would burn—and then have to breathe—plastic. Trucks laden with food, fuel, water, and supplies constantly entered the U.S. military base immediately across the road from this camp.

We should acknowledge, with shame, that U.S. contractors signed deals to build hospitals and schools which were later determined to be ghost hospitals and ghost schools, places that never even existed.

On October 3, 2015, when only one hospital served vast numbers of people in the Kunduz province, the U.S. Air Force bombed the hospital at 15 minute intervals for one and a half hours, killing 42 people including 13 staff, three of whom were doctors. This attack helped greenlight the war crime of bombing hospitals all around the world.

More recently, in 2019, migrant workers in Nangarhar were attacked when a drone fired missiles into their overnight camp. The owner of a pine nut forest had hired the laborers, including children, to harvest the pine nuts, and he notified officials ahead of time, hoping to avoid any confusion. 30 of the workers were killed while they were resting after an exhausting day of work. Over 40 people were badly wounded.

U.S. repentance for a regime of attacks by weaponized drones, conducted in Afghanistan and worldwide, along with sorrow for the countless civilians killed, should lead to deep appreciation for Daniel Hale, a drone whistleblower who exposed the widespread and indiscriminate murder of civilians.

Under the Espionage Act, Hale faces ten years in prison at his July 27 sentencing.

We should be sorry for night raids that terrified civilians, assassinated innocent people, and were later acknowledged to have been based on faulty information.

We must reckon with how little attention our elected officials ever paid to the quadrennial “Special Inspector General on Afghan Reconstruction” reports which detailed many years’ worth of fraud, corruption, human rights violations and failure to achieve stated goals related to counter-narcotics or confronting corrupt structures. 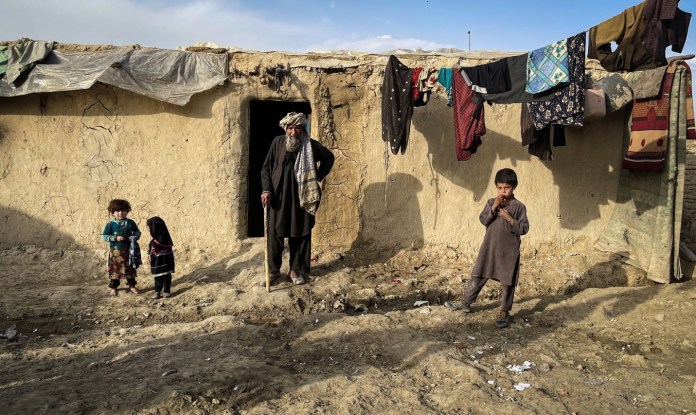 An Afghan man and children, suffering hardships from America’s longest war, pose for a portrait in Kabul, Afghanistan, on March 19, 2021. Photo: The Intercept

When I think of the generations in Afghanistan who have suffered through war, occupation and the vagaries of warlords, including NATO troops, I wish we could hear the sorrow of the grandmother who now wonders how she might help feed, shelter and protect her family.

Her sorrow should lead to atonement on the part of countries that invaded her land. Every one of those countries could arrange visas and support for each Afghan person who now wants to flee. A reckoning with the massive wreckage this grandmother and her loved ones face should yield equally massive readiness to abolish all wars, forever.

A version of this article first appeared in The Progressive Magazine.

Kathy Kelly (kathy.vcnv@gmail.com) is a peace activist and author whose efforts to resist military and economic wars have sometimes led her to live in war zones and U.S. federal prisons. She is working on planning for the Merchants of Death War Crimes Tribunal; she is board President of World BEYOND War and a co-coordinator of BanKillerDrones.org