Point Your Compass Toward the Occupation

“The army never comes into the camp without killing someone as they leave,” said one witness. “It’s like a policy they have.”

In the occupied West Bank, the New Year began like the old one ended – with Israelis killing Palestinians. Adam Ayyad, 15, became 2023’s first child victim when he was shot by soldiers raiding his refugee camp. 2022 was the deadliest year in two decades for Palestinians living under the Occupation: Aged 12 to 80, they were shot in the head, eye, back, running away. Adam’s will lamented all “I wished I could do” if not living “in a country where realizing your dreams is impossible” – and where 15-year-olds make wills.

The beloved only child of a poor family, Adam Ayyad was pronounced dead early Tuesday morning at a hospital in Bethlehem after Israeli soldiers shot him in the chest with live ammunition during a raid on Dheisheh refugee camp, where he attended a UN-funded school and worked at a nearby bakery to help support his parents. Adam was the first known child killed by the IDF in 2023 but the third Palestinian to die in the new year’s first 24 hours amidst almost daily, often-deadly, early-morning search-and-arrest raids by Israeli forces that have seen the highest Palestinian body count in two decades. Witnesses said Adam was among several youths trying to prevent soldiers from taking away Adnan Ajouri, another resident, when an Israeli sniper opened fired at them. “The army never comes into the camp without killing someone as they leave,” said one witness. “It’s like a policy they have. Anytime they come into the camp…they have the order to kill.”

Authorities – the U.N., media sources, human rights groups, Palestinian officials – say Israeli violence against Palestinians in 2022 was the worst since the Second Intifada began in 2000. As Palestinian resistance against conditions under the Occupation has risen, so, too, has brutal suppression by Israel’s apartheid regime – a response unlikely to change with the launch of its newly barbaric, most rabidly far-right government in history. Estimates of fatalities range from 220 to 231 Palestinians killed, mostly in Jerusalem and the West Bank, especially in Nablus and Jenin; they include 34 to 54 children under 17. Monthly killings ranged from a low of six to a high of 30 in October – almost one a day. The vast majority were bystanders or civilians killed during raids by Israeli forces; most were unarmed, or throwing stones or occasionally Molotov cocktails toward soldiers while posing no real danger to them. In the same year, Israeli forces demolished 950 Palestinian homes, Israeli settlers carried out over 800 attacks on nearby Palestinian villages, and more than 9,000 Palestinians were wounded in disparate acts of violence. 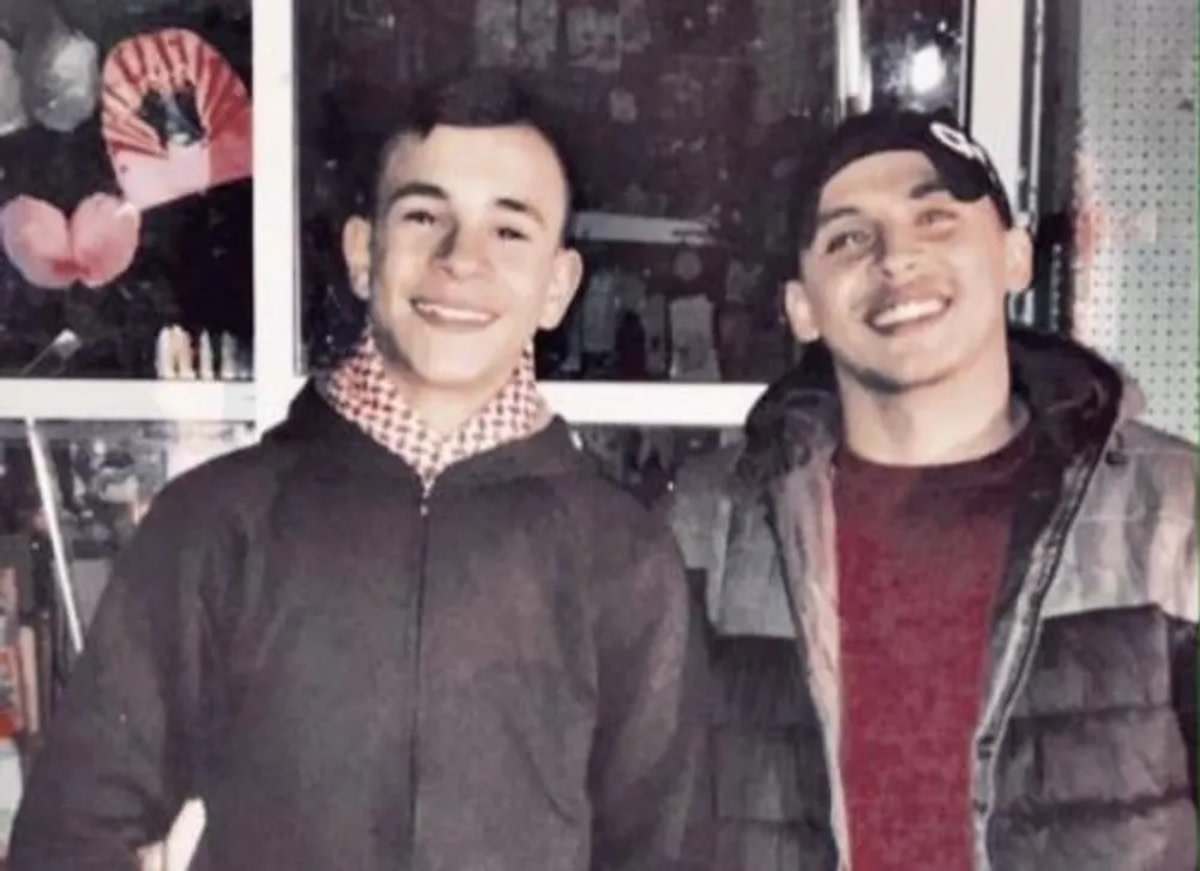 Adam Ayyad, left, was devastated by the death of his friend Omar Manna, right, last month. Omar was killed by Israeli forces as they were arresting his brother. (Photo from Twitter)

The dead include Palestinian political prisoners who died of “direct medical negligence” in prison, where 150 Palestinian children are also detained. But by far most were random victims of the systemic military violence needed to sustain a genocidal Occupation – especially since late 2021, when Israel further loosened its open-fire rules to pretty much, “Shoot what moves.” The killings began the first week of January – the father of an 18-month-old shot in the head, a man going to work run over by a settler – and didn’t stop. A 16-year-old shot in the eye, an 18-year-old shot walking home from school, a man shot dropping off his nephews at school, a 14-year-old shot running away from soldiers, a 16-year-old shot riding a motorcycle, a 17-year-old shot in his abdomen by “an exploding bullet that ruptured his blood vessels,” a 47-year-old widow and mother of six driving her car shot “on suspicion,” a 57-year-old with diabetes suffocated from tear-gas during a raid, two teens shot respectively in the chest and, when his friend came to his aid, in the back of the head. Shot hiking, looking for work, watching a protest, walking with friends.

Two 80-year-olds were killed: One run over by an Israeli truck, one after a patrol claimed he “resisted a check”; soldiers dragged, gagged, blind-folded, zip-tied and dumped him in a warehouse where he died of a heart attack, his body left there. Seven-year-old Rayyan Sulaiman also died of a heart attack after soldiers chased him. Jana Majdi Zakarneh, 15, was shot twice in the face while playing with her cat on the roof of her house; Zaid Ghonaim, 15, was shot while hiding in a garage; among seven girls killed were Fulla al-Masalma, shot the day before her 16th birthday, and Hanan Khaddour, 18, shot walking home from school. At least five Palestinians died at the hands of not soldiers but settlers whose brutality is only growing. 12-year-old Ahmad Dawabsheh is the only survivor of a 2015 attack in which settlers fire-bombed his family’s home in the village of Duma, burning to death his mother, father, and 18-month-old brother Ali; today, settlers have attacked the village a dozen more times and Ahmad is still undergoing surgeries from a gruesome crime the uncle raising him bitterly blames on “not just one settler” but a murderous Occupation itself.

Its latest victim Adam Ayyad died when soldiers conducted a brutal early-morning raid on the Bethlehem-area Dheisheh camp to detain Adnan Ajouri. As they retreated, they fired tear gas, sound bombs and live ammunition at a group of furious, helpless young people who’d begun throwing stones; Adam was hit in the chest and died soon after, the third Palestinian killed in 2023. Hassan Manna, owner of the bakery where Adam worked, called him “a happy kid, with an electric personality” who’d been devastated by the killing of his friend Omar Manna, who also worked at the bakery, during another raid to arrest Omar’s brother. The two friends died within a month of each other.

After Adam’s death, a photo circulated on social media of a hand-written last will and testament his family reportedly found in his pocket. “I want to tell you martyrdom isn’t death – it’s an honor to yourself and the whole world,” he wrote. “Set your compass and point it toward the Occupation.”

Adam echoed the hope of recently killed resistance fighter Ibrahim al-Nabulsi that “the people will wake up.” “There were a lot of things I wished I could do,” he noted, “but we live in a country where realizing your dreams is impossible.” And where – unconscionably, inconceivably – 15-year-olds write their wills. May he rest in peace and power.

Abby Zimet
Abby Zimet has written Common Dream’s Further column since 2008. A longtime, award-winning journalist, she moved to the Maine woods in the early 70s, where she spent a dozen years building a house, hauling water and writing before moving to Portland. Having come of political age during the Vietnam War, she has long been involved in women’s, labor, anti-war, social justice and refugee rights issues.