One Night in Miami

I was only a year and a half out of the Army. I spent two years as a paratrooper, but I was still a 22-year old punk kid from New York trying to make it in Miami Beach. That spring I landed a job as a City of Miami Beach lifeguard but on that day in February 1964 I was parking luxury cars at the Fontainebleau Hotel. I had met Beau Jack, the very popular former two-time lightweight boxing champion of the world. After a career in which he earned over a million dollars, he was shining shoes at the same hotel. He was also training a few fighters at the famous 5th Street Boxing Gym in South Beach. One of his fighters, an aspiring middleweight who also worked at the hotel, suggested I talk to Jack. I was a fan and had boxed a little in the Army. At the time, I was in good shape and thought I was tough enough to be a fighter (I wasn’t). After a while I worked up the courage to approach Beau Jack. He turned out to be the sweetest guy and immediately and enthusiastically agreed to train me. What could be better, a young, strong Jewish kid fighting in Miami Beach? Maybe we could do something together and Jack could get out of the shoeshine business. It didn’t work out that way. I did train for about a year at the 5th Street gym and had two fights, won the first, got busted up pretty good in the second fight. End of a brief career.

At the same time there was another 22-year-“old, considerably more talented boxer who would fight that night and win the Heavyweight Championship. Of course that was the very charismatic and brash Cassius Clay, and the fight was with a man considered by many to be the most formidable heavyweight ever, Sonny Liston. The days before the fight numerous boxing and other celebrities floated in and out of the Fontainebleau. I saw Rocky Marciano sign photographs, one to a man who asked Rocky to  sign it to his five-year-old daughter. Rocky signed it as he did all the others—“Keep punching, kid.” I also remember briefly getting a glimpse of Liston, he was intimidating and powerful. No one thought the brash kid from Louisville had a chance. Many, myself included, were rooting for the 8-1 underdog  but really afraid he would be hospitalized by this destructive, unstoppable force called Sonny.

I didn’t have a TV at the time, so that night after work I rushed back to my apartment in South Beach and listened to the fight on radio. The former Olympic Champion did indeed “shock the world.” Like many, I couldn’t believe what came across the airwaves. Here’s some of what I listened to with video footage added later. And here’s the seventh round, which effectively began the World Championship and world-changing career of Muhammad Ali. 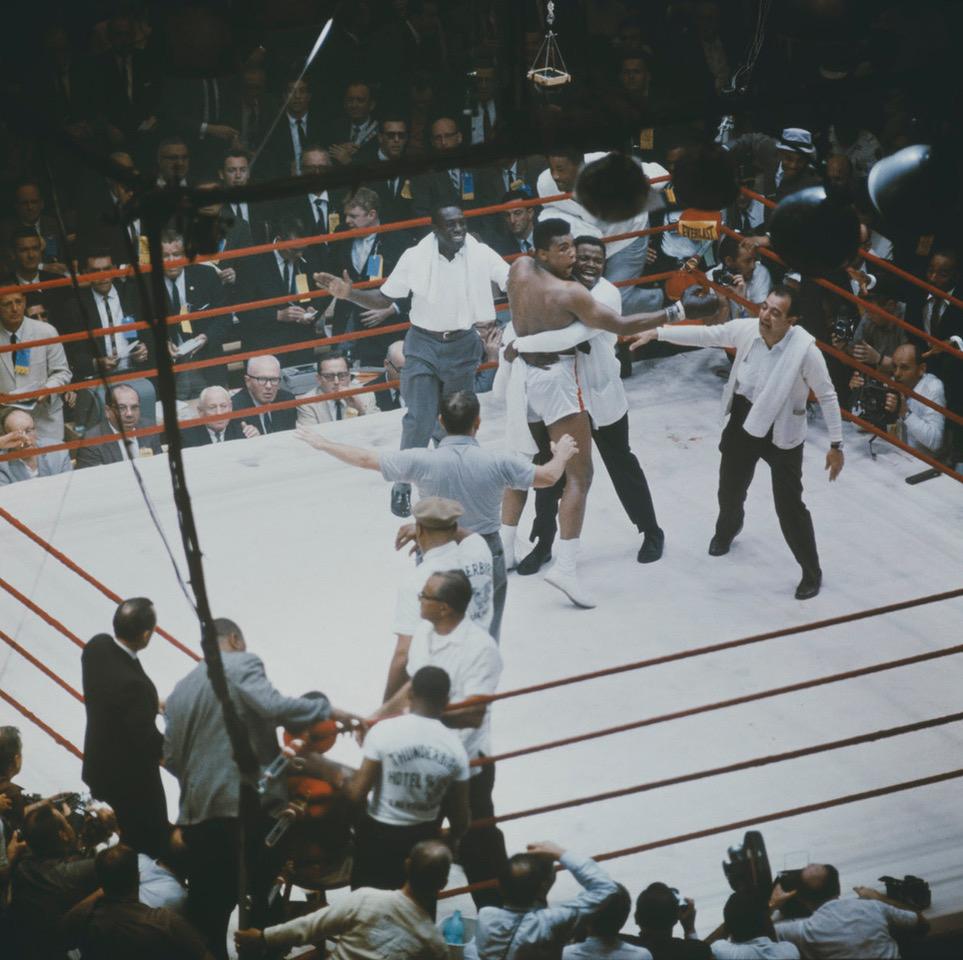 Muhammad Ali (then Cassius Clay) is congratulated by his cornerman Drew Bundini Brown and trainer Angelo Dundee (right) after he beat Sonny Liston to become the Heavyweight Champion of the World in Miami Beach on February 25, 1964.

Much later, in a 2013 stage play One Night in Miami by Kemp Powers, and more recently in the 2020 feature film directed by Academy Award-winner Regina King, the story came out that after the fight, Clay (very soon to be Muhammad Ali), Malcolm X, Jim Brown and Sam Cooke—at Ali’s insistence, or maybe it was Malcolm’s—eschewed a big celebration at the Fontainebleau and spent most of the night at Malcolm X’s room at the Hampton House Motel. Here is Jim Brown’s recollection of that fateful night. Less than a year later, both Malcolm and Sam Cooke would be dead. Among those four great Black men who shaped history, only the unstoppable Jim Brown is left.

Tarak Kauff is the editor-in-chief of Peace and Planet News. He was a paratrooper in the U.S. Army from 1959 to 1962 and is a lifetime member and former board member of Veterans For Peace. He is a longtime activist for peace, justice, and the environment.