My Day in Palestine: The Stunning Beauty and Cruel Reality of an Occupied Land

Walking through the low hills of the Naqab as the sun sets and the moon comes up is an experience that allows us to imagine what Palestine was like before it was torn apart by Zionists and what can still be saved if we act fast.

JERUSALEM — The ruins of the Palestinian village of Sataf sit on the slope of a beautiful hill on the outskirts of Jerusalem. Today the area is a Jewish National Foundation (JNF) park called “Har Eitan,” or Mount Eitan. It is covered in pine trees that were planted by the JNF to hide the Zionist crime of ethnic cleansing, a crime that has been designated as a crime against humanity.

In 2021, massive fires broke out on the hills surrounding Jerusalem and countless pines were burned, including the ones around Sataf. There is an 8 kilometer trail that goes around the mountain and people use it to hike and jog and sometimes ride mountain bikes. Parts of this trail are very steep and in some cases these steep parts go on for a good mile.

When I am in Jerusalem, Sataf is where I like to run, and the day after my arrival here in mid-February I went on a run. I don’t always run the full 8 kilometer circle because those steep hills are a killer, but this time I did. Running through the mountain I saw burnt towering pine trees, standing like a monument to the arrogance and stupidity of British and Zionist settlers and colonizers who think they know what’s good for the “colony.”

As I ran, I saw laborers, mostly Palestinians, cutting down these tall burnt matchsticks and I could see for the first time that the ground was visible. The plain earth under the trees was visible after all these years, and there was Palestinian landscape right there alive and well.

The terraces that were built and cultivated by Palestinian farmers throughout the centuries are still there, as are the olive trees, the occasional fig, and countless almonds that are now in full bloom. It is cold and rainy in Jerusalem now and so the ground is covered with small pink cyclamens and tall pancratium with white flowers that grow everywhere this time of year. 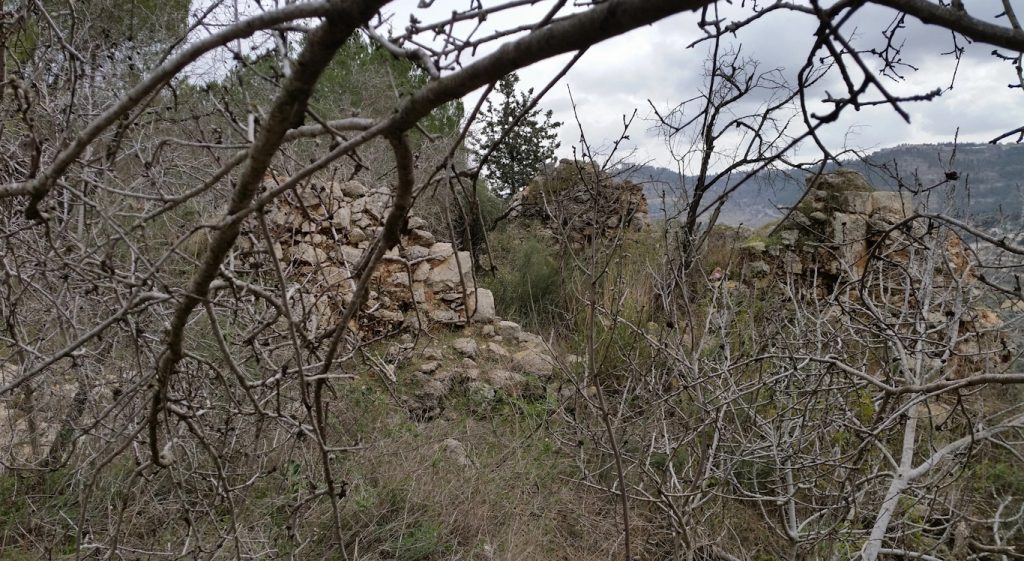 The Northern Naqab is also green this time of year. Vast green spaces that have not yet been spoiled by Zionist encroachment allow for a truly wonderful getaway for an afternoon. Walking through the low hills of the Naqab as the sun sets and the moon comes up is an experience that allows us to imagine what Palestine was like before it was torn apart by Zionists and what can still be saved if we act fast. The reality of life in Palestine could hardly be more frightening and less inspiring than the natural phenomena I was describing.

Better still to do this with young Palestinian Bedouins from the Naqab who know the land and appreciate its value and beauty in ways that privileged settlers could never comprehend. I had an opportunity to have a chat with some young Palestinian Bedouins in Bi’r Al-Saba. It was a small gathering organized ad-hoc by activist friends who reject Zionism, stand up to defend their lands, and demand their right to maintain their way of life.

An Israeli woman who happened to be present when I spoke stormed out of the meeting. She said that I and the organizers were poisoning the young minds of these Palestinians. This arrogance, which is sadly characteristic among Zionists, leads many to believe that the problem is not the crimes against humanity perpetrated against the Palestinians in the Naqab but rather their peers and people like me talking to them about it.

In a moment of caring in the midst of madness and violence, like a lotus flower rising from the mud, a clown was walking among the crowd at the Sheikh Jarrah protest. I had seen her before many times; she gives out little heart-shaped stickers and in the summer she has a little spray bottle and she sprays people with cold water. The police brutalize her as they do anyone who dares to challenge them, even a clown.

In the protest that took place on Friday, February 18 she was there. The police acted with hate and brutality that matched the Amnesty International definition of Israeli crimes as Crimes against Humanity. At one point the clown, whose name I don’t know, stood in a row with other protesters facing the Israeli terror squads. They wanted the protesters to back off and immediately began to push.

When these guys push, they do it with the brutality of a herd of mad buffalos. The clown was pushed so hard it looked as though her entire torso was going to snap off. When the pushing and shoving begins, everyone runs or gets trampled. The violence was unprovoked, inexcusable and certainly unnecessary. The only violence during these protests comes from the police. 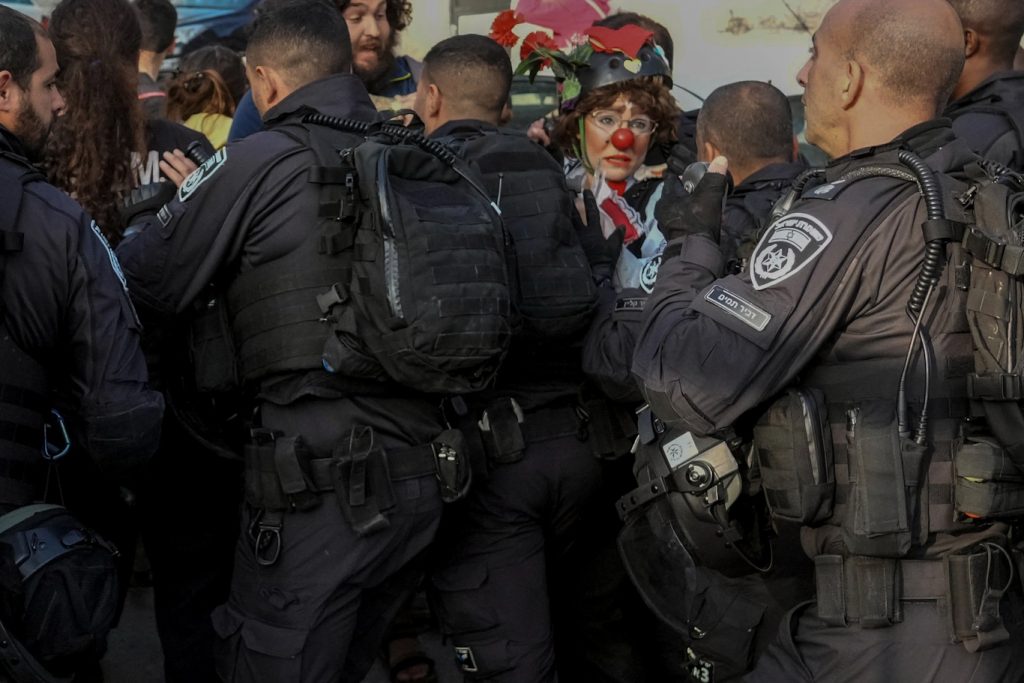 Sometimes Empathy Is All We Have

Later in the evening, before I left the scene, I walked over to the clown to say thank you and see if she was alright. She was standing next to one of the older gentlemen, who lives in Sheikh Jarrah. Just as many of the other veteran residents of this neighborhood, he cannot wrap his mind around the reality that is unfolding around him. One cannot blame him, since it is a madness that no healthy mind can understand.

This gentleman was venting; then he went from venting to lecturing, then to expressing his rage and frustration, and then again confusion. The whole time I stood there she was present, listening to the man go on and on. She reached her hand out to me for a moment to say, “I know you’re here,” and she kept listening with her heart open to this man whose life is being terrorized by maniacal, racist, violent gangs who have the full weight of the Israeli state behind them. He clearly needed to speak out, even if it was to a clown.

The enormity of the process that is unfolding in Sheikh Jarrah is hard for people to grasp. Those of us who show up to express solidarity and to stand with the Palestinians who are victims of this crime against humanity cannot possibly feel the pain and fear that the Palestinians, who live through it and whose lives are being ruined, experience. To see this Palestinian gentleman stand before a clown and vent his feelings, and to see the heartfelt way in which she was listening, was a great way to end a very difficult day.

About 10 minutes after I had left, while I was walking to my car, I heard two loud explosions. It was strange because the protest had ended, the police were just casually standing around and all that remained were people from the neighborhood singing and dancing. But that too needed to stop so they threw two stun grenades into the crowd.

The battle for Sheikh Jarrah could not be more important. The only way we can prevent the total destruction of the lives of the Palestinians in Jerusalem – and the neighborhood of Sheikh Jarrah, in particular – is by demanding that governments and nongovernmental organizations around the world apply the recommendations of Amnesty International’s report on Israeli apartheid, including compelling Israel to grant Palestinians their human rights, guarantee their right of return, and provide them with reparation for the loss of land and property they have endured under Israeli occupation.

Miko Peled is MintPress News contributing writer, published author and human rights activist born in Jerusalem. He served as an officer in the Israeli Defense Forces. His latest books are The General’s Son. Journey of an Israeli in Palestine and Injustice, the Story of the Holy Land Foundation Five.