So why do climate justice groups like 350.org support the war in Ukraine?

While the world’s climate negotiators gathered for the COP27 summit in Egypt, a new report published by the Transnational Institute, a Dutch think tank, emphasizes how rising global military spending is a great threat to efforts to combat climate change.

According to the report’s authors, “every dollar spent on the military not only increases greenhouse gas emissions, but also diverts financial resources, skills and attention away from tackling one of the greatest threats humanity has ever experienced.”

The trajectory of military spending has been rising since the late 1990s, reaching a record of $2 trillion in 2021. Between 2013 and 2021, the richest countries spent a combined $9.45 trillion on the military. By far the biggest military spender was the U.S. which, between 2001 and 2018, emitted an estimated 1.267 trillion tons of greenhouse gases, about 40% of which were attributed to the War on Terror and military interventions in Afghanistan and Iraq. 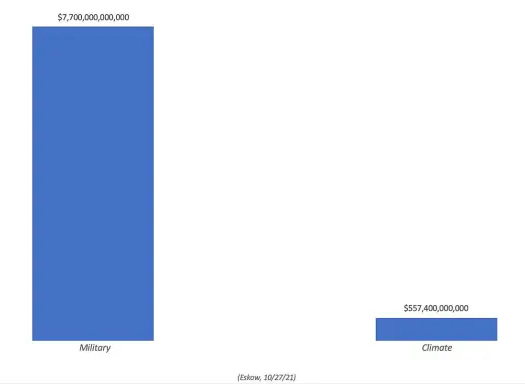 The Transnational Institute report emphasizes that “there is no evidence the military can be green,” despite public relations campaigns pointing to the installation of solar panels on bases, and replacement of fossil fuels in certain military hardware.

The military has been unable to find adequate fuel alternatives for its vehicles and fighter jets, which emit huge amounts of greenhouse gases, and keeps developing new weapons that pollute even more.

“Supercharging of Military Spending and Emissions”

According to the report, the war in Ukraine has “super-charged military spending and emissions.”

The European Commission anticipates a spending boost by its member states of at least $200 billion. The U.S. has adopted a record $847 billion military budget for 2023, and Canada announced in 2022 an extra $8 billion in military spending for the next five years.[1]

Climate goals are being quickly thrown out the window as resources are being diverted from climate finance to military spending. 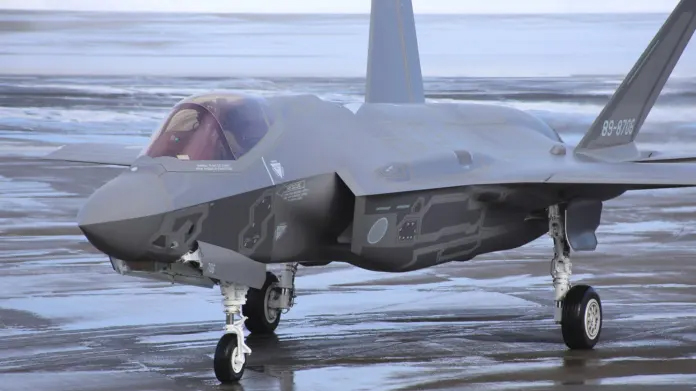 In June 2022, the UK shifted money from its climate finance budget to partially finance a £1bn military support package for Ukraine.

The main winner in all this has been the arms and oil industries, which have experienced major increases in its stock prices and profit margins while the rest of the world burns.

Asleep at the Wheel

Sadly, many leading climate justice groups have cheered on the war in Ukraine—undercutting their environmentalist mission.

On March 1, 2022, 350.org, an activist organization committed to a transition to renewable energy, published an article by Julia Krzyszkowska on its website that might as well have been published by the State Department, CIA or Defense Department.

The article was entitled “Solidarity with the People of Ukraine.” It proclaimed that “Ukraine, a peaceful democratic nation, is under a brutal military attack by Russia’s President Putin.”

However, Ukraine is not a peaceful democratic nation—its democracy was usurped in February 2014 when the U.S. backed a coup overthrowing the democratically elected President Viktor Yanukovych—and its current leader, Volodymyr Zelensky, has banned 11 opposition parties, hunted down dissidents, pressed to ban the Russian orthodox church, and muzzled opposition media while slaughtering thousands of people in eastern Ukraine.

In order to support Ukraine, Krzyszkowska advocates for readers to join anti-war (read anti-Russian) protests in their cities, tweet at their elected representatives using the #StandWithUkraine hashtag, or write or call their members of parliament, and ask them to support sanctions against Putin’s Russia.

Sanctions, however, are tantamount to an act of war that have triggered many hot wars in the past—like the Pacific War in World War II—and could very well trigger a nuclear war in this case.

Also of significance, the sanctions have targeted Russia’s manufacturing sector, hampering Russian President Vladimir Putin’s efforts to diversify Russia’s economy away from reliance on oil and gas exports, while resulting in growing shipments of liquified natural gas to Europe by U.S. companies that devastated the environment in the fracking revolution.

Krzyszkowska rationalized the sanctions on the grounds that “Russian oil and gas profits fill Putin’s war chest, and the world’s reliance on Russian pipelines let him invade a peaceful nation without fear of consequences. It’s our money flowing into Russian oil giants that’s funding violence in Ukraine.”

But if Krzyszkowska had any understanding of the conflict, she would know that Putin did not invade a peaceful nation on a whim in February 2022, but that Ukraine had started the war eight years earlier with U.S. backing when it attacked the people of eastern Ukraine after they voted for their autonomy following the February 2014 Maidan coup.

Putting an Environmental Canopy on the Anti-Putin Bandwagon

Krzyszkowska’s position dovetails with that of 350.org founder Bill McKibben who characterized Vladimir Putin as “evil” and said that the Biden administration had “played its hand wisely in the buildup to [Russia’s] invasion,” which it had actually helped provoke.

McKibben wrote in February that it was “amazing to watch people across the planet rallying to the defense of brave Ukraine—choirs singing outside Russian embassies, soccer teams refusing to play Russian teams. And it’s wonderful to watch governments rise to the occasion: shutting off airspace to Russian airplanes, or kicking them off international banking protocols.”

McKibben supported weapons shipments to Ukraine and advocated mass shipments of electric heat pumps to Europe to offset the destruction of the Nord Stream 2 pipeline and lessen European dependence on Russian fossil fuels.

An accelerated movement to decarbonize North America, in his view, would weaken oil and gas dependent Russia, and prompt its economy to “buckle,” paving the way for regime change in a fantasy shared by the Biden administration.

In a thoughtful critique of McKibben published on countercurrents.org, Raymond Lotta wrote that McKibben was playing a leading role in “putting an environmental canopy on the anti-Putin bandwagon…and objectively acting to bring environmental activists and broader progressives into an embrace of the strategic aims and war preparations of U.S. imperialism against its imperial rivals.”

The Biden administration, according to Lotta, “called for ‘energy independence’”—not a renewable-energy revolution in a recent state-of-the-union-because fossil-fuels are foundational to the profitable functioning of capitalism-imperialism, as it has developed.”

Lotta continued: “Oil is a strategic-military necessity, and an instrument of imperialist competition, rivalry, and domination. The essential truth is that only by making a revolution to overthrow this system and creating a sustainable socialist economy and society do we have a chance to address the climate crisis on the scale and with the urgency required.”

Jeremy Kuzmarov
Jeremy Kuzmarov is managing editor of CovertAction Magazine. He is the author of four books on U.S. foreign policy, including Obama’s Unending Wars (Clarity Press, 2019) and The Russians Are Coming, Again, with John Marciano (Monthly Review Press, 2018). He can be reached at jkuzmarov2@gmail.com.