With no mention of military emissions at COP26, a coalition is mobilizing to force the Pentagon to disclose and reduce its enormous carbon footprint.

More than 100,000 people protested the 2021 U.N. Climate Change Convention, or COP26, in Glasgow, where they networked, forged alliances and made clear their opposition to the status quo.

“There have been 25 COPs before this one, and every year leaders come to these climate negotiations with an array of new pledges, commitments and promises and as each COP comes and goes, emissions continue to rise,” Ugandan delegate Vanessa Nakate said. “I hope you can appreciate that we may be skeptical when the largest delegation here … does not belong to a country but instead belongs to the fossil fuel industry.”

There were in fact more than 500 delegates in attendance at the conference with ties to the fossil fuel industry, or twice the number of indigenous delegates.

Scientists from within the Intergovernmental Panel on Climate Change, or IPCC, acting out of fear that their reports would be watered down, leaked part of the IPCC report months ahead of schedule. The report provided critical information about the huge energy consumption of wealthy populations and the need for them to adopt lifestyle changes in order to avoid civilizational collapse. 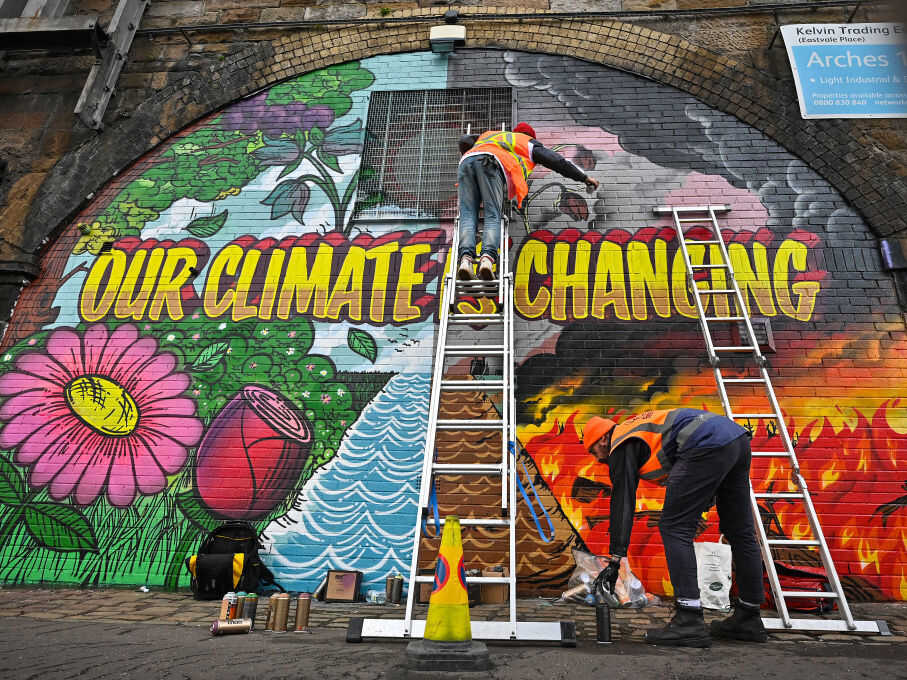 The U.S. Department of Defense is the largest institutional user of fossil fuels in the world and, consequently, the world’s largest institutional producer of greenhouse gas emissions.
Additionally, Greenpeace UK reported that more than 30,000 leaked files show corporations and nations, including petrostate Saudi Arabia and OPEC, pressured the IPCC to focus on potential technological solutions and exclude language calling for phasing out fossil fuels. In the end, COP26’s weakened language called for a “phase-down of unabated coal power and inefficient fossil fuel subsidies” rather than the “phase-out of fossil fuels.”

“The COP26 outcome is a compromise, reflecting the interests, contradictions and state of political will in the world today,” U.N. Secretary General Antonio Guterres said after the conclusion of the conference. “It’s an important step, but it’s not enough. It is time to go into emergency mode. The climate battle is the fight of our lives, and it must be won.”

The United States is responsible for one quarter of the world’s cumulative emissions, and maintaining oil reserves and supply lines is critical to its interests. The government’s commitments to reduce emissions fall short of what is needed to meet either the goals of the 2015 Paris Agreement or to provide global climate leadership.

Various U.S. administrations have long kicked climate issues down the road and acted in self-serving ways. For example, in 2014, Edward Snowden released documents showing that in 2009, the NSA secretly spied on delegates at COP15 to undermine negotiations. The U.S. also negotiated for the Kyoto accords to exclude requirements to report military emissions.)

The U.S. Department of Defense is the largest institutional user of fossil fuels in the world and, consequently, the world’s largest institutional producer of greenhouse gas emissions. Between 2001 and 2017, the U.S. wars in Iraq and Afghanistan alone emitted 1.2 billion tons of greenhouse gases, cost $8 trillion and killed 900,000, according to the Cost of War project at Brown University.

“If the military were to disclose its full carbon footprint and do so on a regular basis, that number would be deeply embarrassing and create a tremendous amount of political pressure on the U.S. military to reduce those emissions going forward,” former army officer and Afghanistan War veteran Eric Edstrom told Democracy Now! “We cannot make smart choices intellectually and strategically, until those numbers come out.”

While the United States has taken steps to reduce emissions, the highly respected Climate Action Tracker rates its efforts as “insufficient.” If other nations were to follow the U.S.’ lead, the temperature would rise 2-3 degrees Celsius. This is a death sentence first for island nations, but no one is immune to out-of-control temperature rises once the tipping points are passed. 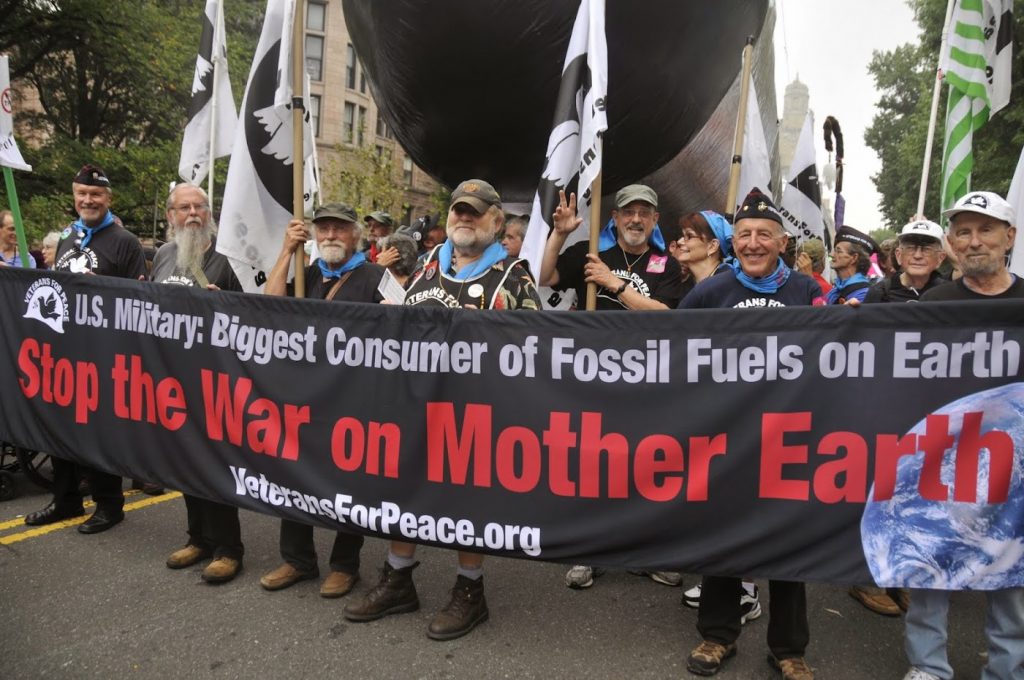 With 140 chapters across the country and abroad, Veterans For Peace, or VFP, is one of many organizations focused on this issue. As a lifetime associate (non-veteran) member, I have been working to raise public awareness in the United States about the connection between militarism and climate disruption.

After VFP passed a resolution on global warming in 2019, members formed the Climate Crisis and Militarism National Project, or CCMP. In an effort to call attention to the impact of the Pentagon on the climate, the project has a resource-packed website and presents educational slideshows around the nation — meanwhile, our veterans have also met with the staff of President Biden’s Climate Envoy John Kerry.

Reducing militarism, collaborating with adversaries to mitigate climate change, and the need for transparency on military emissions were all on the table in what was a congenial discussion. The project shared our bold open letter with Kerry’s staff ahead of our April 2021 meeting. We continued to gather signatures and presented it to him, again, after adding hundreds of enthusiastic domestic and international signatories to support it.

CCMP also organized panels for VFP’s annual convention and for a COP26 coalition in Glasgow. (Our discussion on the role of militarism in climate justice can be seen here.) One of our panelists, David Collins, a veteran from VFP U.K., served as boots on the ground in Glasgow providing us with daily updates and a final debrief as COP came to a close.

Meanwhile, CCMP’s legislative team, led by Jim Rine, worked on a congressional resolution calling for the Defense Department to report and reduce its military emissions. Rep. Barbara Lee agreed to take the lead on it, and we began building a strong coalition that included Food and Water Watch and Greenpeace to further support the resolution

In concert with the opening of COP26 in Glasgow, Rep. Barbara Lee successfully introduced a resolution aimed at monitoring and reducing the U.S. military’s carbon footprint. It quickly garnered 26 original cosponsors. (Add your support via this petition.) According to her staff, Sen. Elizabeth Warren is considering introducing a Senate version of Rep. Lee’s resolution. 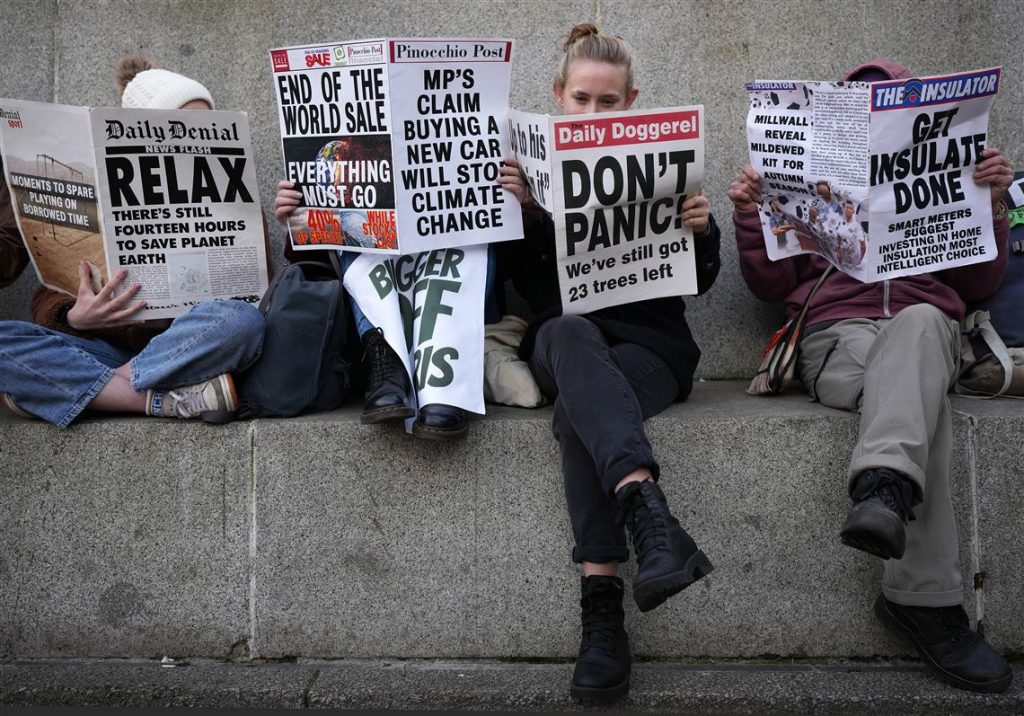 Yet from the podiums of COP26 itself, there was no mention of military emissions, which let militaries off the hook, regardless of their contributions to the problem. With only a decade or less left to humanity before critical climate tipping points are breached — leaving humanity without any possibility of acting to mitigate the worst scenarios—there is no time to lose. 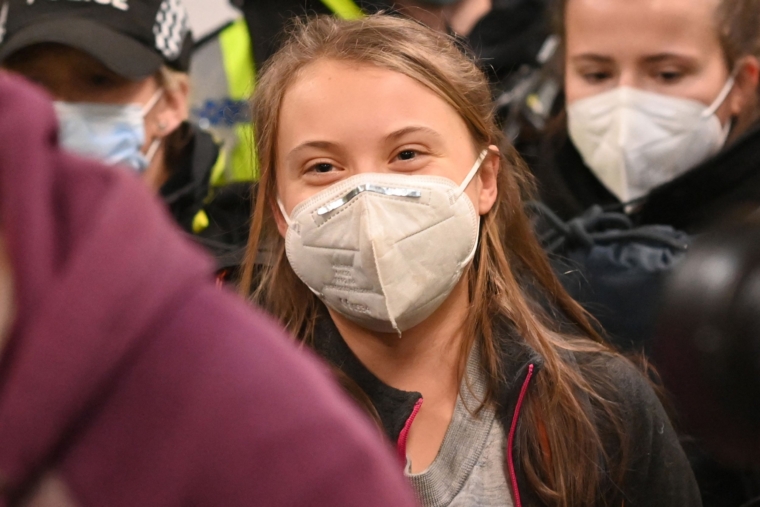 Despite declaring COP26 a failure, Greta Thunberg put the dire situation in context when she tweeted: “A reminder: the people in power don’t need conferences, treaties or agreements to start taking real climate action. They can start today. When enough people come together then change will come and we can achieve almost anything. So instead of looking for hope—start creating it.”

Cindy Piester is a lifetime peace activist and former alternative media cable access television producer/host, who has been giving presentations on climate disruption and U.S. militarism since 2018. She is currently on the steering committee of Veterans For Peace’s Climate Crisis and Militarism Project, and is on the Women’s International League for Peace and Freedom’s Earth Democracy Committee and the board of Unitarian Universalists for a Just Economic Community.