Consider the harmful, grasping tentacles by corporations around the bodies and minds of youngsters through relentless direct marketing that bypasses parental authority. Now comes my sister Claire Nader’s new book You Are Your Own Best Teacher! Sparking the Curiosity, Imagination and Intellect of Tweens.

The corporate creep started out in the movies and early kids’ television, such as Mickey Mouse and Donald Duck cartoons. Then these cartoons expanded to include ads for sweets and soft drinks. Then the marketeers promoted diets exploding with sugar, salt and fat, documented in detail by the Center for Science in the Public Interest (see NutritionAction). This resulted in obesity, diabetes and predispositions to other diseases. The TV stations would not air counter ads to defend vulnerable children.

Meanwhile, outside middle-school and high schools’ premises, vendors for the carcinogenic tobacco companies were passing out free cigarettes. Hook them at age twelve and you’ve got them for life was the savage Big Tobacco strategy.

In recent decades, the open floodgates of direct marketing of anything and everything to kids has become a half-trillion-dollar annual business. Every mode of seduction, manufactured peer group pressure and minute psychological profiling is delivered by highly-paid promoters, packagers and influencers.

Then about 2007 came the iPhone and other “smart” phones that plunged pre-teens and teens into the addictive Internet Gulag. Predatory practices were planned to the nth degree by the likes of Facebook, Instagram and others right down to click-on fine-print-contract peonage. But that’s not enough for Mark Zuckerberg and Tim Cook who are eagerly planning a deeper Metaverse quicksand and so-called “augmented reality” (read depthless virtual reality). Already, many kids are staring at iPhones and computer screens six to seven hours a day. Violent videogames have become hyper-addictions interfering with school work and convulsing family life.

Although parenting columns and recent actions by the Federal Trade Commission and an overwhelming bipartisan vote in the California legislature to address the serious mental health consequences of the Internet on youngsters are raising alarms, the corporations are digging ever deeper into young psyches. Profits are Kings not to be dethroned. As James U. McNeal put it in his 1992 book “Kids as Customers: A Handbook of Marketing to Children” there is always “Needed: New, New Product Strategies that Really Target Kids.”

Over the years, Claire has been observing these merciless, cruel exploitations and wondering about our society’s failure to protect the young generations. As a response to these commercializations of childhood (“tearing apart the fabric of childhood,” as former Arizona Governor Bruce Babbitt phrased it), she has written on 60 topics speaking directly to the 9 to 12 years olds (Tweens) and, unlike the profiteers, connecting Tweens to families, communities and nature through various elevated conversations and experiences. 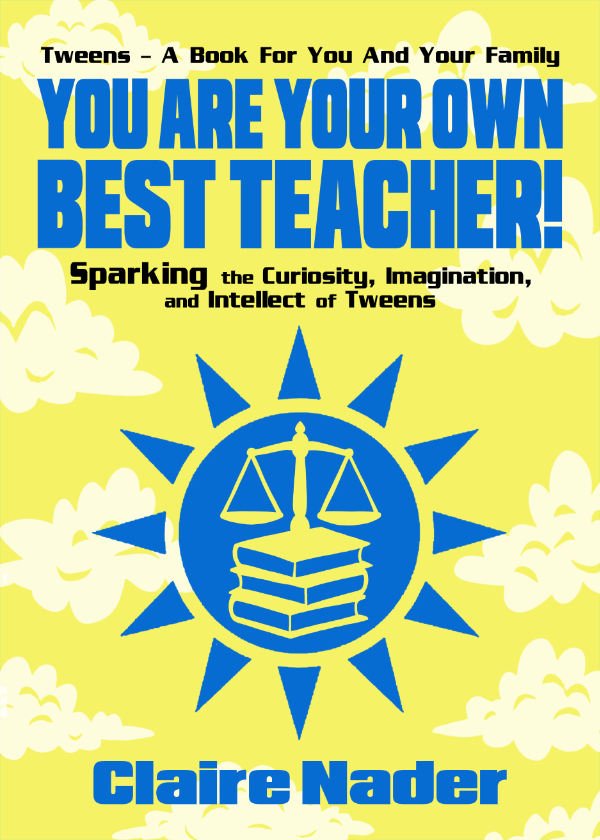 Call the book an antidote, like no other, to liberate young innately curious, imaginative, practical idealists from the commercial pressures coming down on them every day.

She doesn’t talk down to Tweens. Instead, she guides them toward raising their own sense of significance (giving examples of accomplished Tweens), and realizable achievements.

“You Are Your Own Best Teacher!” recounts many motivating stories from history to the present, which make Claire’s nudges toward self-educational experiences exciting. She introduces them to young Benjamin Franklin, young Frederick Douglass and young Helen Keller to illustrate their profound self-awareness and discipline. She takes them on a tour of the print dictionary, highlighting concepts such as justice, freedom, peace, wisdom and gratitude.

By addressing Tween’s self-consciousness, the book takes youngsters on explorations about “being smart” to learn about their own bodies, and encourages them to press for more physical activity, eat smartly, control their time and avoid hours glued to hypnotic screens. Explaining the importance of “learning to unlearn” and asking questions such as “what if?” and “why?” regarding the outside world, she encourages Tweens to teach themselves to distinguish fact from fiction, thinking from just believing, respect from self-respect, all of which will prepare them for the realities they will face as they mature.

Claire has long believed that if you have low expectations for Tweens, they will oblige you, but if you have high expectations, they will surprise you. Her book offers suggestions that encourage communing with nature, enrich family discussions, appreciate the wisdom of the ancients, and to use proverbs to extend the ability of children to concentrate.

Teachers understand the benefits of self-education that enhances the vitality of their classrooms. Self-teaching to build Tween’s confidence is also heartening for parents who feel they have lost control over raising their own children to the stupefying seductions of video-driven hucksters. This book is for the whole family!

The main thrust of her effort, however, is to directly speak to Tweens, with a calming sense of humor, about their futures as active young citizens, skeptical shoppers and lifelong learners. This means anticipating how to better handle their turbulent adolescent years and later apply their talents to further the common good and protect posterity.

Of the many encomiums bestowed on this transformative book, one stood out for me from law professor and author Robert Fellmeth, who wrote: “All in all, this book is full of wisdom – more than any other I have read in my 76 years on this earth. I wish I could have read it to my two sons. None of us would fall asleep and all of us would grow wiser.”

To obtain You Are Your Own Best Teacher! go to inspiringtweens.com. It makes an important gift, for Tweens, parents and local libraries.