Japan Rearms Under Pressure from Washington

A wake-up call for the antiwar movement.

The Dec. 16 announcement by Japan’s Prime Minister Fumio Kishida of a new defense strategy, while doubling military spending by 2027 to implement it, is the largest defense shake-up in decades and a wake-up call to the antiwar movement.

The decision includes openly acquiring offensive weapons and reshaping its military command structure for its expanded armed forces. On Dec. 23, the draft budget was approved by Kishida’s cabinet.

Japan’s dangerous military expansion should set off international alarm bells. This major escalation is taking place based on intense U.S. imperialist pressure. It is the next step in the “Pivot to Asia,” aimed at threatening and surrounding China and attempting to reassert U.S. dominance in the Asia Pacific.

The movements opposing endless U.S. wars must begin to prepare material and draw mass attention to this ominous threat.

The plan to double military spending will add $315 billion to Japan’s defense budget over the next five years and make Japan’s military the world’s third largest, after the U.S. and China. Defense spending will escalate to 2% of gross domestic product, equal to the goal the U.S. sets for its NATO allies. Japan’s economy is the world’s third largest.

The Japanese government plans to buy up to 500 Lockheed Martin Tomahawk missiles and Joint Air-to-Surface Standoff Missiles (JASSM), procure more naval vessels and fighter aircraft, increase cyber warfare capabilities, manufacture its own hypersonic guided missiles and produce its own advanced fighter jets, along with other weapons. The plan shifts from relying solely on missile defense to also embracing “counterstrike” capabilities.

Three key security documents — the National Security Strategy (NSS), as well as the National Defense Strategy (NDS) and the Defense Buildup Program (DBP) — shed some of the postwar constraints on the Japanese military.

Although the U.S. occupation force, after defeating Japan’s military in World War II, imposed a “pacifist” constitution on Japan, for decades now U.S. strategists have pressured Japan’s government to aggressively rearm, and especially to buy U.S.-made weapons, to act as a junior partner to U.S. efforts to dominate the Asia-Pacific region.

Article 9 of the imposed Japanese constitution prohibits Japan from maintaining an army, navy and air force. To get around this, the “Japanese Self-Defense Forces” (JSDF) have since 1952 been treated as a legal extension of the police and prison system. The U.S. occupiers considered the JSDF an essential repressive tool defending capitalist property relations against the workers’ movement.

The effort to “reinterpret” Article 9 has been a continuing political struggle inside Japan. Mass rallies of hundreds of thousands have mobilized many times in defense of Article 9, which offers a clear prohibition of Japan’s maintaining a military force. The widespread opposition to the Japanese military and to constitutional change comes from working people, mobilized by the unions and the communist and socialist movements.

This movement pointed out to everyone how the wartime militarist regime of the 1930s and 1940s carried out brutal repression and led Japan into WWII. The people know from bitter experience that these ultrarightist forces, whose roots are in historic Japanese colonialism, are the real threat to their rights and the social gains they have made.

The present doubling of the defense budget will be funded by raising taxes. A huge military budget will inevitably mean severe cuts to the country’s limited social spending.

The Liberal Democratic Party, which has held power almost continually since the 1950s, is right-wing, pro-military and allied to U.S. imperialism, especially against China and the DPRK. They have been pushing for an end to the constitutional and legal restrictions on the country’s military.

The assassination of retired President Kashihara Abe on July 8, 2022, just two days before Japan’s election, brought additional votes to the LDP. It was able to win the two-thirds supermajority in Parliament, needed to move forward aggressively with its military plans.

Japan’s military expansion fits in with Washington’s aggression aimed at China, the DPRK and Russia. U.S. strategists’ goal is to use the U.S. alliance with Japan, South Korea and Australia, just as it uses the U.S.-led NATO alliance in Europe.

The doubling of NATO’s membership and NATO’s targeting of Russia have led to war in Ukraine, when the U.S. government imposed thousands of new sanctions against Russia, and the U.S. has ruptured the European Union’s mutually beneficial trade with Russia.

A U.S.-Japan alliance is now defined as a “cornerstone” of Japan’s security policy. (Japan Times, Dec. 17)

The U.S. media praised Japan’s new security strategy document as a “bold and historic step.” U.S. National Security Advisor Jake Sullivan praised the defense spending hike, which “will strengthen and modernize the U.S.-Japan alliance.” U.S. Secretary of State Antony Blinken called Japan an “indispensable partner” and cheered that the changed security documents reshape the ability to “protect the rules-based order in the Indo-Pacific region and around the world.” (quotes, whitehouse.gov, Dec. 16)

U.S. corporate power is the immediate beneficiary of this sharp turn in policy, built on military threats and economic sanctions.

Foreign Affairs Magazine calls the announcement: “a profound transformation” and states: “The new national security strategy, however, represents a stunning change. . . . [T]he government is enacting policies that have been debated for decades but were always blocked. Until now . . . Japan’s new national security strategy should be applauded: ” (Foreign Affairs, Dec. 23)

U.S. policy toward the defeated capitalist class in Germany, Italy and Japan was remarkably similar. At the end of WWII, many of the industrial leaders who had backed these fascist regimes were quietly protected and rehabilitated in Japan, Germany and Italy, along with the fascist collaborators who fled from workers’ control in Eastern Europe.

The U.S. and later NATO used the rehabilitated fascists against a rising workers movement in West Europe and against socialist construction in Eastern Europe. U.S. corporations, who had aggressively moved into the defeated Axis countries, needed insurance that their investments would be protected from the strike waves.

By 1950 the U.S. was at war on the Korean peninsula and, while using U.S. troops in Korea, needed a military force for “peacekeeping and self-defense” of capitalist property relations in Japan. Germany, Italy and Japan began to rearm during that period.

The Impact on Okinawa 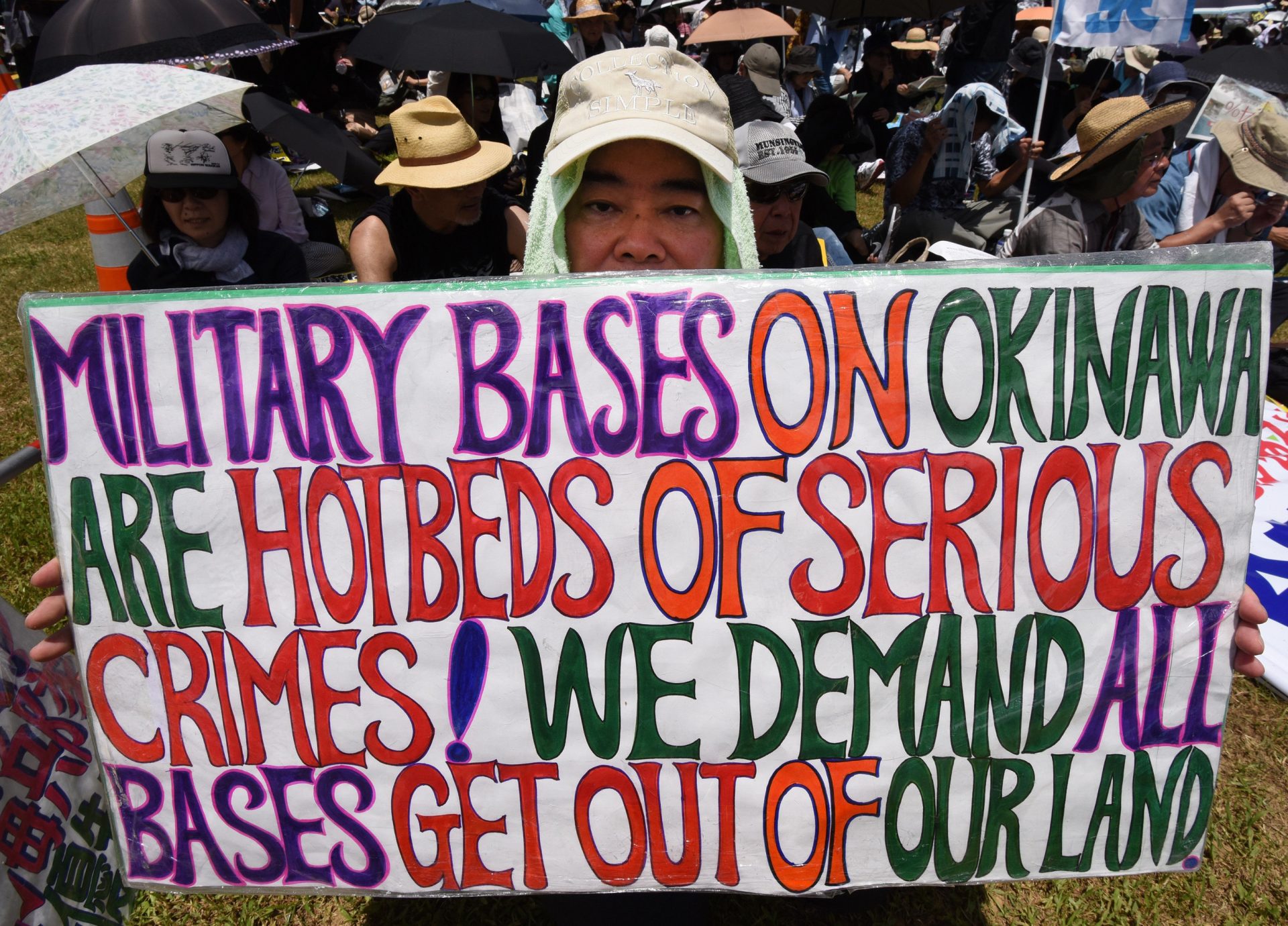 A chain of 150 islands called the Ryukyu Archipelago, of which the largest island is Okinawa, 400 miles from the Japanese mainland, is in reality a colony of Japan. Its population of 1.74 million people suffers from Tokyo’s rule and from the occupation by U.S. military bases. Okinawa is geographically closer to Taiwan than it is to the main islands of Japan.

Upgrading and strengthening Japanese ground units on Okinawa is part of the new National Security Strategy (NSS). Other islands, which are part of the chain southwest of Japan, will be further militarized.

Upgrading of Japan’s 15th Brigade on these islands for future electronic warfare, cyber warfare and joint operations of the ground, maritime and air forces are clearly a sign of plans to intervene in the Taiwan Straits.

In recent years, Japan has deployed anti-ship and air-defense missiles on its southwest islands of Amami Oshima, Okinawa Main Island, Miyako Island and a missile base on Ishigaki Island, the island closest to Taiwan.

Okinawa residents, the Indigenous Ryukyu people, have spent decades protesting the constant presence of the U.S. military in their daily lives. There are now 31 U.S. military installations on the island prefecture of Okinawa, which accounts for 74% of the area of all U.S. military bases in Japan, although Okinawa only constitutes 0.6% of Japanese territory.

The U.S. maintains 73 military bases and 28,500 troops in South Korea. Both South Korea and Japan are forced to pay for “hosting” these troops of occupation. 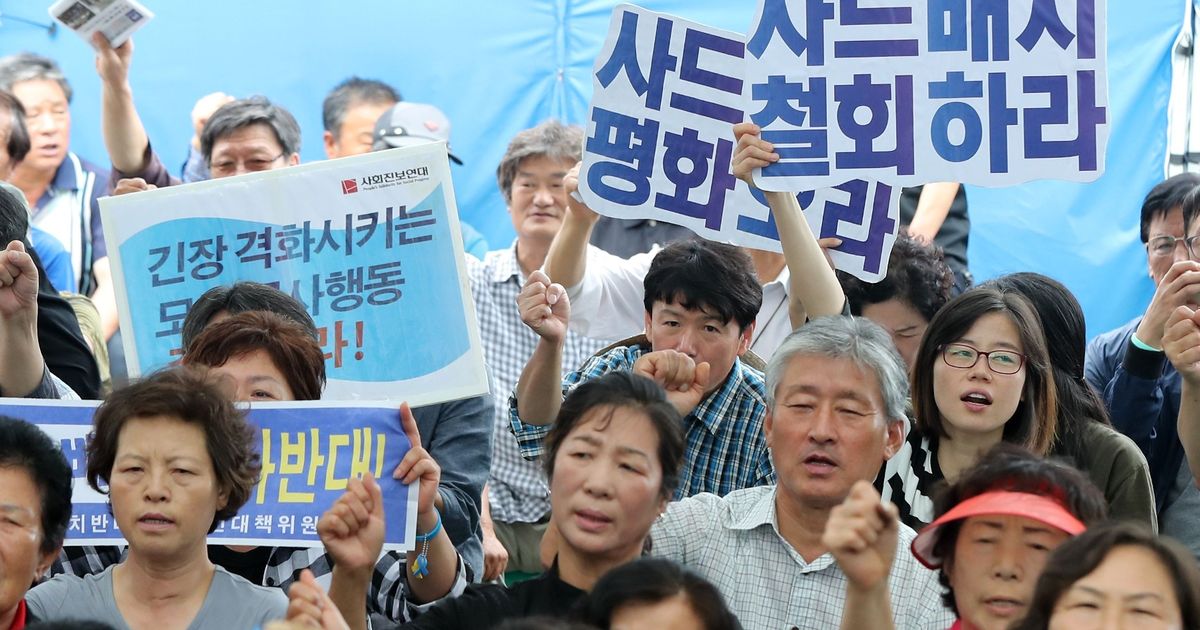 Japan has previously justified its remilitarization by claiming North Korea is a threat. However, retired Maritime Self-Defense Force (MSDF) Admiral Tomohisa Takei told the media that China has been the main target for which Japan has been preparing, “by using North Korea’s threat as cover.” (AP, Dec. 17)

This cynical admission of the planning and preparation for war, while claiming self-defense, is similar to former German Chancellor Angela Merkel’s Dec. 8 admission that the signing of the 2014 Minsk Agreement was not a peace treaty with Russia. Merkel confirmed that NATO wanted war from the start but needed time to prepare Ukraine militarily. (interview in Die Zeit, Dec. 7)

Having goaded Russia into an invasion of Ukraine in a bid to weaken and fragment Russia, the U.S. is next seeking to turn Taiwan into a military quagmire for China. The Biden administration is facilitating Taiwan’s purchase of advanced weaponry from the U.S. and greater diplomatic ties with the island.

Part of an effort to focus political attention through fact sheets, talking points, videos and webinars on the growing threat of U.S. pressure for Japan’s rearming is the short video below, entitled: “Japan’s constitutional amendment: a dangerous signal.”

The video was made in China and includes U.S. participation. People from many countries will need to cooperate to confront the growing militarism in Japan, the U.S. and their allies.

Sara Flounders is an American political writer who has been active in progressive and anti-war organizing since the 1960s. She is a member of the Secretariat of Workers World Party, as well as a principal leader of the International Action Center. She also frequently writes for Workers World newspaper