Irish Neutrality as a Global Force for Peace

It was the morning of St.Patricks Day 2019, when retired US Marine Major Ken Mayers and myself, a former US Army paratrooper, crawled under one fence, cut through another and the barbwire beyond it and made our way onto Shannon airfield.

St. Patrick drove the snakes out of Ireland. Our aim was the same, only this time the snake was the US war machine. Like others before us, our intention was to inspect a plane that we knew carried US troops and weapons and expose the criminality of the US war machine and the complicity of the Irish government in allowing Irish neutrality to be so blatantly breached since the year 2001.

Ken and I made no effort to hide as we walked towards the US plane that we were virtually certain carried troops and weapons to wreak death and destruction in the Middle East. For half an hour, we closed in on that plane before airport security stopped us. If we had been actual terrorists with intent to do grievous damage in revenge for what happened to their people, airport security would have failed with potential horrific consequences for civilian workers at Shannon.

We spoke to crowds in pubs and gathering places about why we felt Irish neutrality was of critical importance not only for Ireland but for global peace. We spoke of the damage to our precious climate and environment caused by U.S. militarism, wars and proxy wars.
As it was, both Ken and I are peaceful, nonviolent activists and security had no trouble holding us until the Gardai arrived. We explained what we were doing and why and asked the Gardai to inspect the plane for weapons, as was their job. Of course they didn’t, and we spent a not unpleasant night in the Shannon jail before being remanded without bail to Limerick Prison where we would spend the not-so-pleasant next 13 days mostly confined in a two-by-three-an- a-half-meter cell.

We were released, but not before we paid €5,000 in security bail and had our passports taken. They were not returned until almost nine months later, when the judge at the criminal court in Dublin finally decided we were honourable men and would come back to Ireland for trial, whenever that was.

Although we wanted to be home, the next nine months were actually among the best of my life. We were welcomed by the Irish everywhere we went, as the TV, newspapers and radio followed the case of the two elderly US veterans arrested at Shannon. People, even the guards in Limerick Prison, respected what we did and the vast majority agreed with why. It was “fair play, lads” and “well done” and the warmth, conviviality, hospitality and generosity of the Irish people made us feel at home away from home.

As we traveled and walked throughout this green island we spoke to crowds in pubs and gathering places about why we felt Irish neutrality was of critical importance not only for Ireland but for global peace. We spoke of the damage to our precious climate and environment caused by US militarism, wars and proxy wars; we spoke of the many tens of thousands of children orphaned, maimed and killed by these wars, and our commentary did not leave unscathed Irish politicians who were betraying the people and were complicit in US war crimes by subserviently surrendering the island’s precious neutrality. 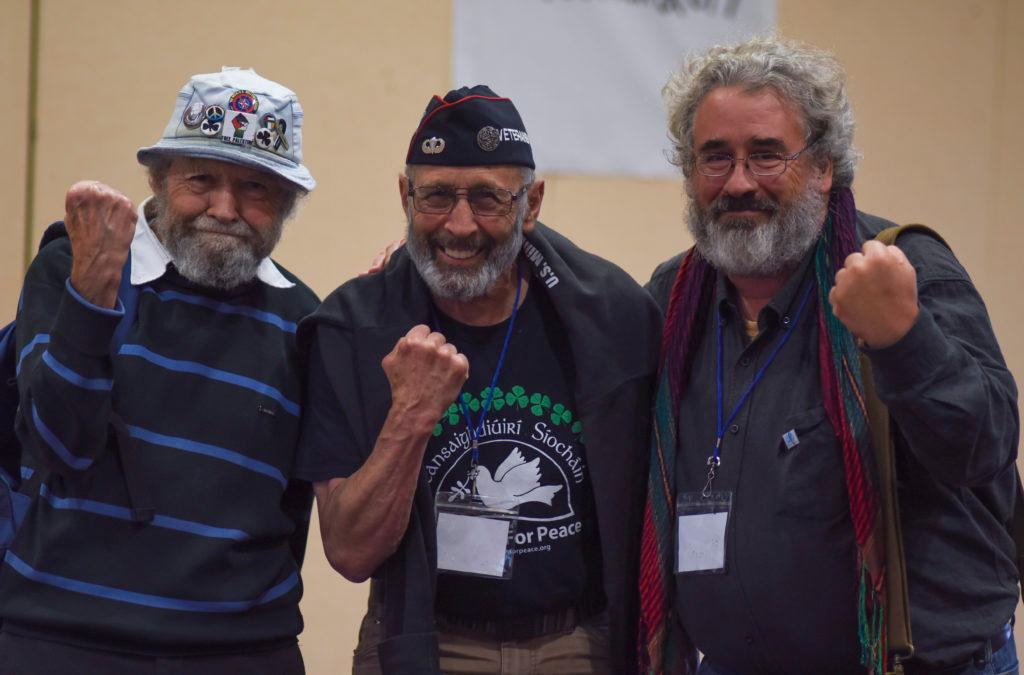 At the World BEYOND War conference in Limerick, Tarak with Colm Roddy (left), who faced trial (innocent of all charges) for going onto the Shannon airfield, and U.S. peace activist Brian Terrell, who has been known to cut a fence or two while protesting U.S. military bases. Photo: ELLEN DAVIDSON

Others had done and said similar things for two decades but we were the first US veterans to take such a stand and that helped bring the issue to the forefront.

But as we claimed, does Irish neutrality have relevance for the safety of humanity not only in Ireland but worldwide? Let’s examine this.

Irish neutrality has a long and proud history, and the vast majority of Irish people support the concept. Although neutrality is not enshrined in the Irish Constitution, it states in Article 29 that:
1. Ireland affirms its devotion to the ideal of peace and friendly co-operation amongst nations founded on international justice and morality. 2. Ireland affirms its adherence to the principle of the pacific settlement of international disputes by international arbitration or judicial determination. 3. Ireland accepts the generally recognised principles of international law as its rule of conduct in its relations with other States.

The government of Ireland, in violation of what is generally understood as neutrality and what the majority of its people believe in, has allowed US military aircraft full of armed troops, as well as CIA torture flights, to refuel at Shannon Airport.
But what does neutrality mean for a country or a nation? According to Britannica.com, neutrality under international law is the “legal status arising from the abstention of a state from all participation in a war between other states, the maintenance of an attitude of impartiality toward the belligerents, and the recognition by the belligerents of this abstention and impartiality. Under international law, this legal status gives rise to certain rights and duties between the neutral state and the belligerents.”
Britannica goes on to state, “The most important of the rights that result from a state of neutrality is the right of territorial integrity. Belligerents may not use a neutral’s territory as a base of operations or engage in hostilities therein. This right applies not only to neutral territory and water but extends to air space above that territory as well.”

The government of Ireland, in violation of what is generally understood as neutrality and what the majority of its people believe in, has allowed US military aircraft full of armed troops, as well as CIA torture flights, to refuel at Shannon Airport. The aircraft in question were not supposed to be carrying any arms or explosives and or taking part in any military exercises or operations.

Of course, as came out in sworn testimony at our trial by Shannon airport authorities, to their knowledge, no US plane landing at Shannon has ever been inspected for armaments, let alone hooded and gagged CIA prisoners.

At present, as many Irish politicians look to enhance their status as allies of the US and NATO, there are moves to militarise Ireland and eventually bring it into NATO. The Irish people will in no way benefit from this. A few in the military-industrial complex will indeed profit financially, but the country as a whole will be put in a more dangerous position. The sons and daughters of Ireland will be sent to fight and die in NATO’s wars. To what gain? 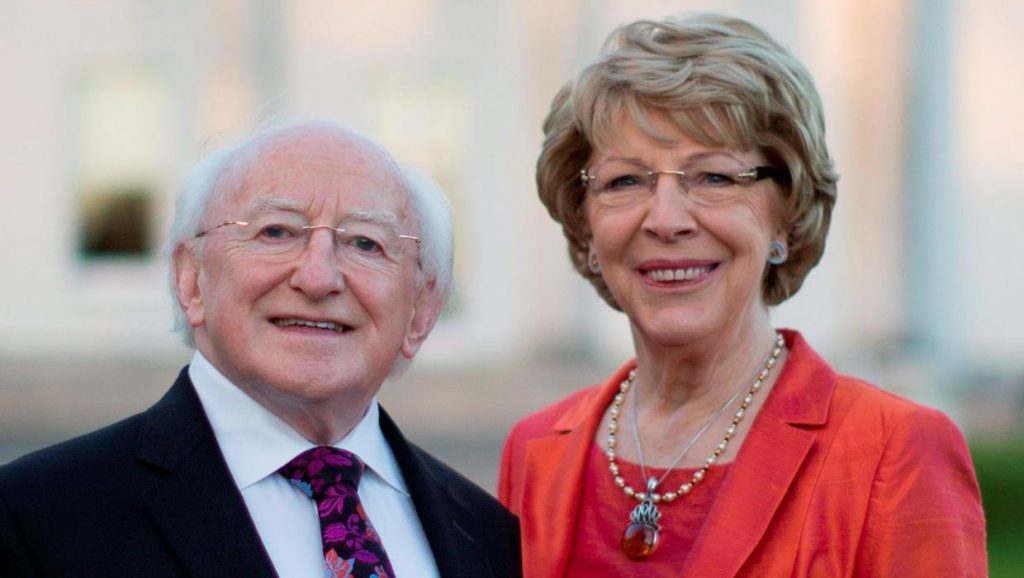 Sabina Coyne Higgins recently wrote in a letter to the Irish Times, “Continuing the war of course makes the climate change crisis worse which is resulting in millions of people in Africa, and elsewhere, being put in further danger of starvation, and the endangering of the food security of so many in different parts of the world.”

She says further, “The Ukrainian people have suffered tens of thousands of casualties and are now losing up to a thousand soldiers a day, killed, wounded or taken prisoner. Your editorial states that in the war it is estimated that 25,000 to 27,000 Russians have been killed in the fighting. … This is surely a moment of moral choice. Concerned people of the world anxious to live together in peace and sustainability must demand that this war be brought to an end so that lives are saved, and there is a lessening of the suffering, and the reconstruction of lives and livelihoods can begin.”

Now more than ever, the world needs Ireland to use its powerful voice as a neutral country to forcefully advocate for peaceful resolutions to conflict. Ireland needs to unequivocally say no to war, no to the US and NATO war machine, and no to proxy war. No, we will not allow our neutrality to be compromised any longer. If Ireland can do this, if the Irish people can stand up to the war-bully, the international community will heed their voice and brave example. Other countries, especially in the global South, will take heart and stand up to the war machine that is literally destroying the very planet we need for life.

Stand up Ireland, defend your neutrality. The global community needs you to do that. 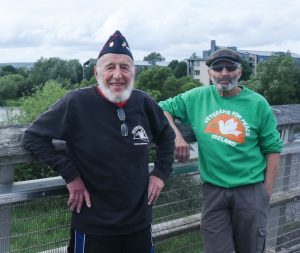 Tarak and Ken during their nine-month stay in Ireland. Photo: ELLEN DAVIDSON

Editor’s note: Tarak Kauff and Ken Mayers returned to Ireland for their trial in April 2022. They were acquitted of charges of criminal damage and trespass with intent to commit an offense, but were convicted of interfering with the operations of Shannon Airport. They were fined €10,000. In a powerful show of solidarity, the €5,000 required in addition to the €5,000 already with the court for their bail was raised within two hours by supporters who were attending the trial. See the full story at stopthesewars.com

Tarak Kauff is the editor-in-chief of Peace and Planet News. He was a paratrooper in the U.S. Army from 1958 to 1961 and is a lifetime member and former board member of Veterans For Peace. He is a longtime activist for peace, justice, and the environment.