It was all lullaby when I arrived
Start of the final stage
First real helicopter war
Weary worn-out wasted
I could feel failure oozing
Watch our half-hearted army
Wobble on its skids and
Understood the only question left
“who would be the last dead dude?”

Morning makeshift at the mirror

And know the place by heart
Remember how to who and

Can handle only in cliché
How blood becomes art

And war a lapel pin
A baseball cap or coffee mug

Ten percent off lunch at Luby’s

And love the four-deuce mortar
My sixteen and my pistol

Sandbags-claymores-barbed-wire
All night knotted in my heart 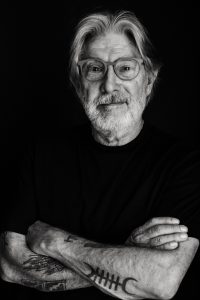 D.F. Brown
Born and raised in the Missouri Ozarks, D.F. Brown served as a medic with Bravo, 1/14th Infantry in Vietnam, 1969–70. Educated at the University of Missouri and San Francisco State University, he is the author of Returning Fire, The Other Half of Everything, and Assuming Blue.  His work has been anthologized in American War Poetry, Carrying the Darkness, and Unaccustomed Mercy and Ghost of a Person.

More from the Poets’ Corner

The Decade the Rainforest Died