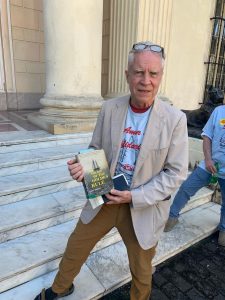 Below is the press statement given by former Veterans For Peace President and current Golden Rule Committee President Gerry Condon in Havana, Jan. 5.

Thank you to the many Cuban people who have welcomed us to their beautiful country.  Thank you to ICAP for hosting our press conference.  And thank you to the members of the media who are here today to listen to our message of peace, love and solidarity.

We are a diverse group of people from the United States and Hawai’i.  We are from the U.S. states of California, Oregon, Washington, New Mexico, Minnesota, New York and Rhode Island.  And several of us are from the island nation of Hawai’i.  We are the crew and supporters of the historic anti-nuclear sailboat Golden Rule. Many of us are members of Veterans For Peace, an organization of former soldiers who are dedicated to abolishing nuclear weapons, and to abolishing war.

We thank Cuba for signing and ratifying the Treaty on the Prohibition of Nuclear Weapons, and for being among the original 50 states parties when it entered into force on 22 January 2021.

When signing the treaty on 20 September 2017, the Cuban Minister of Foreign Affairs, Bruno Rodriguez Parrilla said, “We all share the common responsibility to preserve the existence of human beings in the face of a nuclear threat.”

None of the nine nuclear-armed states – the U.S., the UK, France, Russia, China, North Korea, India, Pakistan or Israel – have yet to sign the treaty to ban nuclear weapons, so we still have a lot of work to do.  And now the war in Ukraine, involving the two nuclear superpowers — the U.S. and Russia — has seriously increased the threat of nuclear war. 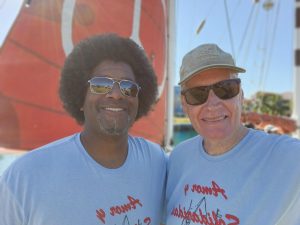 Like Cuba, Veterans For Peace and the U.S. peace movement is calling for a Ceasefire and Negotiations to end this dangerous war as soon as possible.

Five of us here, under the leadership of Captain Kiko Johnston-Kitizawa, sailed the Golden Rule last week from Key West to Havana.  We arrived to Marina Hemingway on Saturday, December 31, just in time to join in your joyful celebrations.

We have come to Cuba to remind the world that we almost had a terrible nuclear war 60 years ago, in large part because of the U.S. hostile foreign policy toward Cuba.  After the failed CIA-organized Bay of Pigs invasion, the U.S. imposed an economic blockade of Cuba that continues to this day, 60 years later, and has even become much harsher.

The U.S. blockade of Cuba is an act of ongoing bullying and terrorism against the Cuban people, whose only crime to seek their own sovereignty, their independence, and their right to develop a unique socialist economy to serve the needs of all Cubans.  So it is ironic that the U.S. has declared Cuba to be a “State Sponsor of Terror,” a designation that makes it even harder for Cuba to carry out normal international financial transactions. Cuba does not sponsor terror.  Cuba sponsors international medical brigades and provides free medical training to its own citizens as well as to young people around the world.

We apologize to the Cuban people for the suffering that our government has caused you.  To tell you the truth, most people in the U.S. do not even know about the blockade.  When we return to the U.S, we promise to do all we can to raise awareness and build political support to end the U.S. blockade of Cuba once and for all.

We love the Cuban people and we want to be good neighbors.