The first post-Cold War assault on Russia by the West began in the early 1990s well before the expansion of the North Atlantic Treaty Organization. It took the form of a US-induced economic depression in Russia that was deeper and more disastrous than the Great Depression that devastated the US in the 1930s.

And it came at a time when Russians were naively talking of a “common European home” and a common European security structure that would include Russia.

The magnitude of this economic catastrophe was spelled out tersely in a recent essay by The New York Times’ Paul Krugman, who wondered whether many Americans are aware of the enormous disaster it was for Russia. Krugman is quite accurate in describing it – but not in identifying its cause.

The graph below shows what happened to Russia beginning in the early 1990s as a result of the economic policies that were put in place under the guidance of US advisers, economist Jeffrey Sachs perhaps the foremost among them. Sachs describes his contribution here.

These policies drove Russia abruptly from a centrally planned economy with price controls to an economy where prices are determined by the market. This process is often described as “shock therapy.” 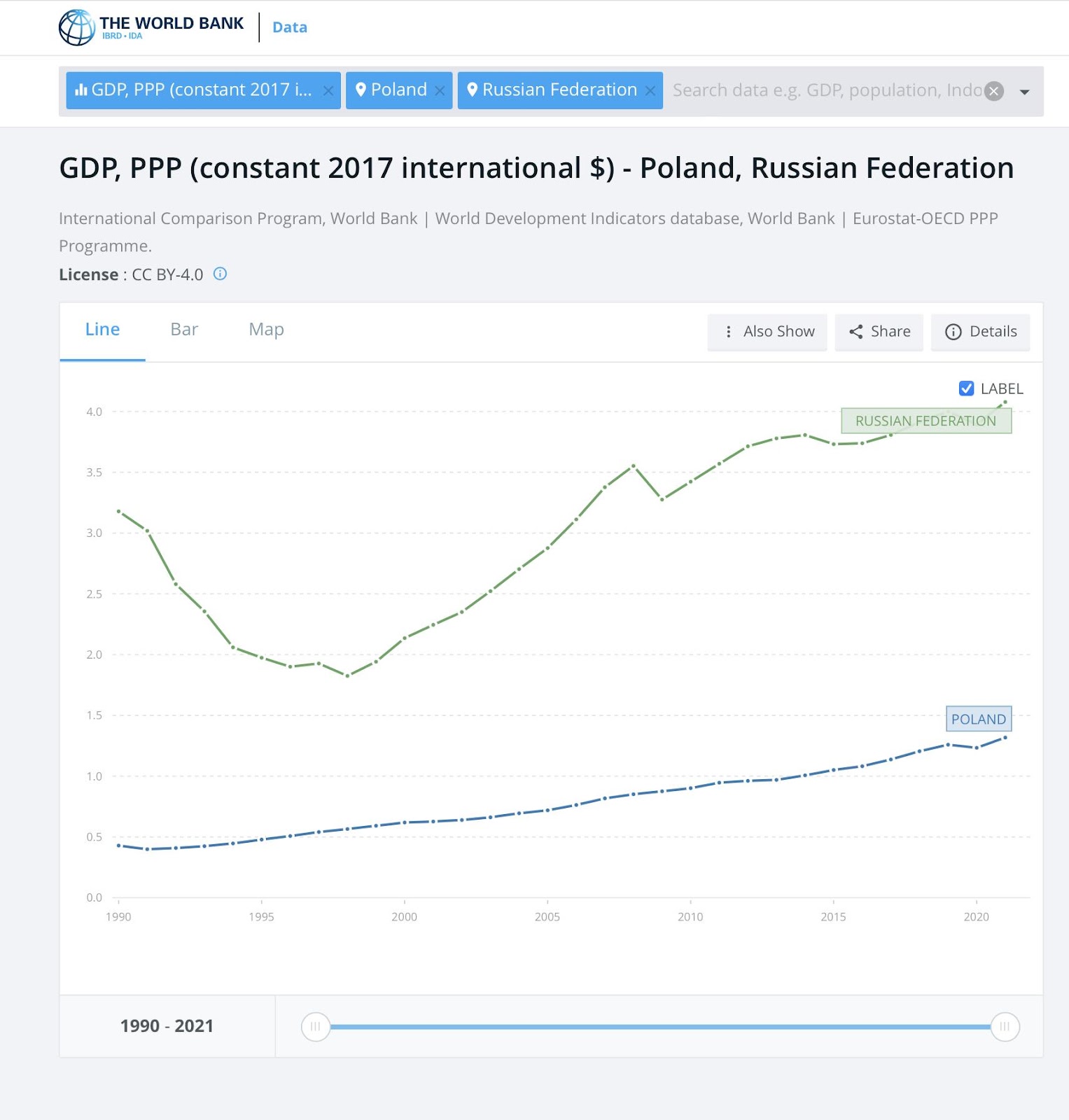 The plot shown above is from the World Bank.

Life expectancy dropped by roughly four years in Russia during that period. Poverty and hopelessness became the norm.
The plot shows that, upon the onset of “shock therapy” in 1991, the economy of Russia crumbled to 57% of its level in 1989, a decline of 43%. By comparison the US economy in the Great Depression of the 1930s fell to 70% of its pre-Depression level, a decline of 30%.

Life expectancy dropped by roughly four years in Russia during that period. Poverty and hopelessness became the norm. From my experience, few Americans know of this, and fewer still understand its magnitude.

The data for Poland are also shown for comparison in the chart above. Why? Because “shock therapy” was also carried out in Poland, beginning two years earlier than in Russia, in 1989.

A glance at the graph above shows the striking difference between the two, and the graph below reinforces that view. Below, the real GDPs for both Russia and Poland normalized to a value of 100 for the first year of their transitions to a market economy are shown in a 2001 IMF staff paper by Gerard Roland, “Ten Years After … Transition and Economics.” The paper is cited by Krugman.

(China is also included by Roland. One lesson is that China moved to a market economy without “shock therapy,” and did so with astonishing success and without putting itself at the mercy of the largesse of the US.) 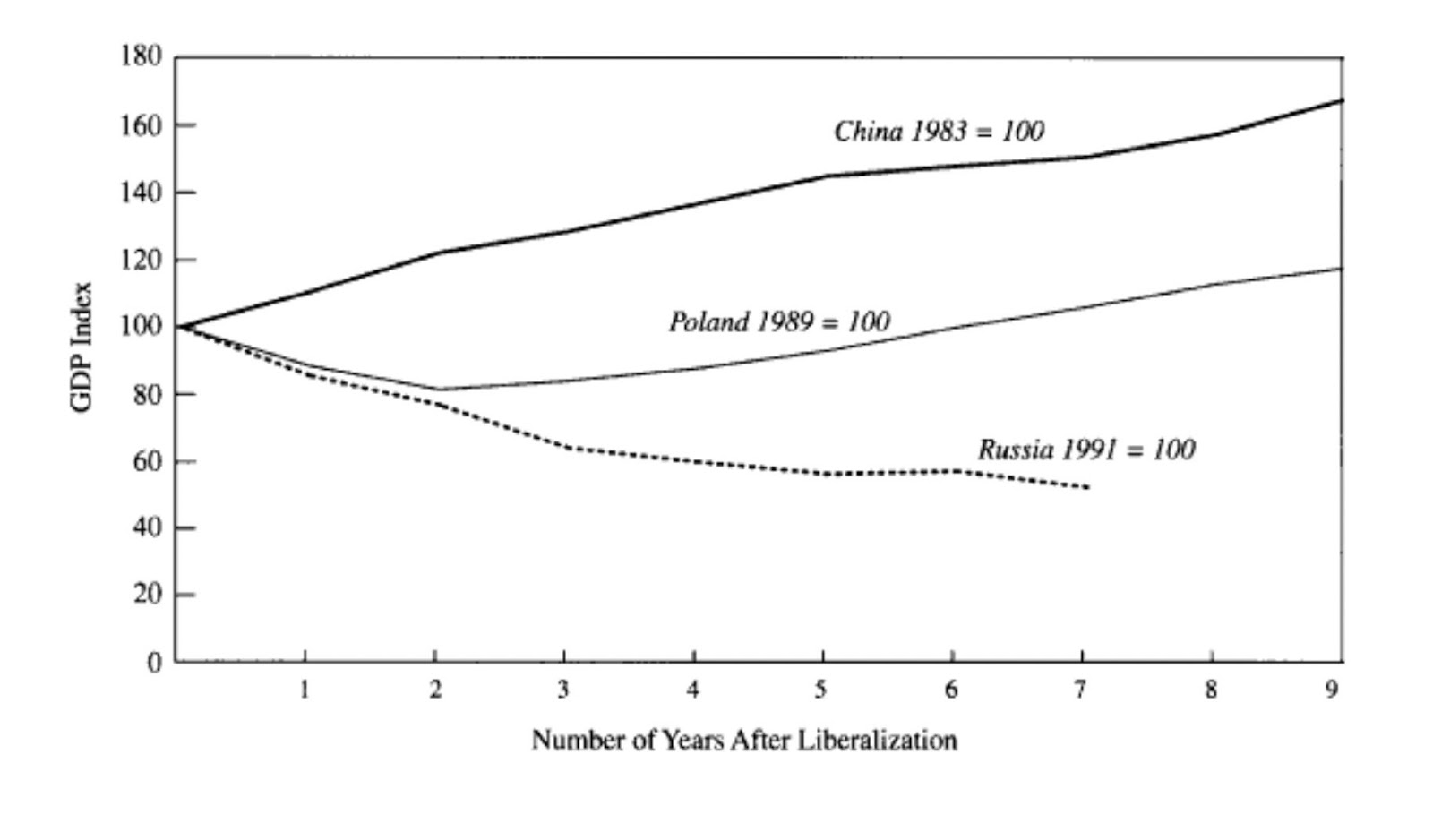 It is immediately clear that Poland went through a brief downturn lasting two years but recovered quickly, unlike Russia, which continued in a slump for 16 years. Why the difference between the two?

A big part of the answer is provided by Jeffrey Sachs, who was in the forefront of advisers for the transitions in both countries and hence is a man who knows whereof he speaks. As Sachs put it in an interview on Democracy Now!, he was present during a “controlled experiment” where he could observe what led to such different outcomes. He says:

“I had a controlled experiment, because I was economic adviser both to Poland and to the Soviet Union in the last year of president [Mikhail] Gorbachev and to president [Boris] Yeltsin in the first two years of Russian independence, 1992, ’93. My job was finance, to actually help Russia find a way to address, as you [the interviewer, Juan Gonzalez] described it, a massive financial crisis.

“And my basic recommendation in Poland, and then in Soviet Union and in Russia, was: To avoid a societal crisis and a geopolitical crisis, the rich Western world should help to tamp down this extraordinary financial crisis that was taking place with the breakdown of the former Soviet Union.

“Well, interestingly, in the case of Poland, I made a series of very specific recommendations, and they were all accepted by the US government – creating a stabilization fund, canceling part of Poland’s debts, allowing many financial maneuvers to get Poland out of the difficulty. And, you know, I patted myself on the back. ‘Oh, look at this!’

“I make a recommendation, and one of them, for a billion dollars, stabilization fund, was accepted within eight hours by the White House. So, I thought, ‘Pretty good.’“Then came the analogous appeal on behalf of, first, Gorbachev, in the final days, and then president Yeltsin. Everything I recommended, which was on the same basis of economic dynamics, was rejected flat out by the White House.

“I didn’t understand it, I have to tell you, at the time. I said, ‘But it worked in Poland.’ And they’d stare at me blankly. In fact, an acting secretary of state in 1992 said, ‘Professor Sachs, it doesn’t even matter whether I agree with you or not. It’s not going to happen.’

“And it took me, actually, quite a while to understand the underlying geopolitics. Those were exactly the days of [Dick] Cheney and [Paul] Wolfowitz and [Donald] Rumsfeld and what became the Project for the New American Century, meaning for the continuation of American hegemony.

“I didn’t see it at the moment, because I was thinking as an economist, how to help overcome a financial crisis. But the unipolar politics was taking shape, and it was devastating. Of course, it left Russia in a massive financial crisis that led to a lot of instability that had its own implications for years to come.

“But even more than that, what these people were planning, early on, despite explicit promises to Gorbachev and Yeltsin, was the expansion of NATO. And [Bill] Clinton started the expansion of NATO with the three countries of Central Europe – Poland, Hungary and [the] Czech Republic – and then George W Bush Jr added seven countries – Bulgaria, Romania, Slovakia, Slovenia and the three Baltic states – but right up against Russia.”

The Neocons at Work

It is quite clear that the goal of the United States was not to help Russia but to bring it down, and Sachs correctly links that to the US quest for global hegemony first set forth in the months before the Japanese attack on Pearl Harbor and reiterated by the neocons who are now its champions. Among them Sachs mentions Paul Wolfowitz, whose “doctrine” sums up the goals of the post-Soviet era with these words:

“Our first objective is to prevent the re-emergence of a new rival, either on the territory of the former Soviet Union or elsewhere, that poses a threat on the order of that posed formerly by the Soviet Union.

“This is a dominant consideration underlying the new regional defense strategy and requires that we endeavor to prevent any hostile power from dominating a region whose resources would, under consolidated control, be sufficient to generate global power.”

What better way to achieve this goal than to reduce the economy of Russia to a basket case? Sachs draws a direct line from the Great Russian Depression of the 1990s and early 2000s to the expansion of NATO, the US-backed coup of a duly elected president in Ukraine in 2014 and on to the US proxy war in Ukraine, also designed to “weaken” Russia. The hand of the US was at work every step of the way.

Not Part of the Narrative That’s Fit to Print

In his article Krugman describes the difference in outcomes between Poland and Russia but he does not describe different factors that distinguish the two countries and might serve as causes of the different outcomes. Sachs points out one such cause which he witnessed first-hand.

Krugman makes no mention of Sachs’ experience that Sachs himself has discussed repeatedly in interviews (like the one quoted, for example, here) and in various written accounts going back to 1993 and a lengthy account in 2012 wherein he describes the lack of aid from the West as his “greatest frustration.” Sachs’ account is no secret and certainly a competent economist would know of it.

Certainly there were other factors contributing to this tragedy, which Sachs himself discusses here. But there is no doubt that the actions of the US and the West were critical factors in the Great Russian Depression.

An understanding of this goes a long way in making sense of events leading up to the present moment of US proxy war in Ukraine and the brutal sanctions imposed on Russia. This understanding, however, does not fit the narrative to which The New York Times confines itself – and its readers.

John V. Walsh, until recently a professor of physiology and neuroscience at the University of Massachusetts Chan Medical School, has written on issues of peace and health care for the San Francisco Chronicle, EastBayTimes/San Jose Mercury News, Asia Times, LA Progressive, Antiwar.com, CounterPunch and others.

He is also a member of Veterans For Peace.