In the Middle Eastern wars that the US has been waging for the past 30 years, few soldiers or pilots have become prisoners of war.

The best known is Bowe Bergdahl, a 23-year old Army private who was captured by the Taliban in 2009 and held until a prisoner exchange arranged five years later by the Obama Administration.

Prior to becoming a POW, Bergdahl had emailed his parents in Idaho, expressing disillusionment with  U.S. intervention in Afghanistan and related mistreatment of Afghan citizens. “We make fun of them in front of their faces, and laugh at them for not understanding we are insulting them,” he told his parents. “I am sorry for everything. The horror that is America is disgusting.”

In one of several videos made and released by his captors, Bergdahl expressed the view that the U.S. should not be involved in Afghanistan and likened its occupation to the Vietnam War.

“Dissenting POWs” tells the little-known story of who spoke out against the war and why.
POWs held in North Vietnam fifty years ago numbered nearly 600 and most benefited from the comradeship of fellow prisoners. Bergdahl’s years of confinement were solitary and difficult; his one failed escape attempt led to additional punishment.

In an echo of Vietnam-era events recalled in Dissenting POWs (Monthly Review Press), a new book by Tom Wilber and Jerry Lembcke, Bergdahl’s release was hailed by President Barack Obama, during a White House press event with his parents. Yet, when the now-sergeant returned home, he faced an Army investigation of his conduct during captivity and beforehand. This led to a military court-martial for alleged desertion and placing other troops at risk during their fruitless initial search for him.

That proceeding ended four years ago with a guilty plea, which allowed Bergdahl to avoid prison time, but resulted in his dishonorable discharge and other penalties (including his exclusion from veterans’ health care services). Then President Donald Trump, a well-known Vietnam War draft evader, called this result “a complete and total disgrace to our Country and to our military.” As a candidate for president in 2016, Trump had previously denounced Bergdahl as a “dirty rotten traitor.”

As Dissenting POWs reports, enlisted men and officers who were captured during the Vietnam War and became publicly critical of that conflict faced similar ostracization, during and after their captivity. But, eager to turn the impending US defeat in Southeast Asia into a victory of some sort, the Republican administration of Richard Nixon kept its official focus on ticker-tape parades and a White House gala celebrating the release of all POWs as part of the 1973 Paris Peace Accords, which ended direct US military involvement in Vietnam. It was left to other former prisoners to accuse those who made anti-war statements of “aiding and abetting the enemy” while imprisoned.

Dissenting POWs tells the little-known story of who spoke out against the war and why—which for co-author Tom Wilber is a very personal tale. One dissenter profiled in the book is his father Gene, a career officer in the Navy and squadron commander shot down over North Vietnam in 1968. Along with fellow pilot and Korean War veteran Edison Miller, who was captured a year earlier, Wilbur first became well known in December, 1970, when a filmed interview with a group of POWs was aired on national television.

Such calls for peace were not much appreciated by the Pentagon or the White House.
When asked for his views on the war, Wilber called for an immediate U.S. troop withdrawal “so that the Vietnamese can solve their own problems.” Both Wilber and Miller signed group letters decrying the “many innocent people dying a totally needless and senseless death” as a result of continued U.S. bombing. In 1971 message, released to the press, Miller described U.S. intervention as “illegal” and “immoral” and his personal participation “in the tragedy of Vietnam” as a source of “personal shame.”

Such calls for peace—while gaining mass appeal, thanks to a burgeoning anti-war movement back home—were not much appreciated by the Pentagon or the White House. Within the ranks of the POWs held in North Vietnam, a group of “Senior Ranking Officers” led by future Rear Admiral and vice-presidential candidate James Stockdale, tried to silence and sanction Wilber, Miller, and others who had developed anti-war views.

After their release, Defense Secretary Melvin Laird declined to bring charges against the dissidents, but Stockdale did, accusing Wilber and Miller of “mutiny, aiding the enemy…and attempting to cause insubordination and disloyalty.” The statements made by another group of dissident POW’s—eight enlisted men known informally as the “Peace Committee”—became the subject of charges filed by a recently freed Air Force colonel.

According to Wilber and Lembcke, a Vietnam veteran and anti-war activist himself, what distinguished the dissenters from their accusers was their “disparate socioeconomic backgrounds.” As the authors note, the senior ranking officers shot down over North Vietnam, like Stockdale, tended to be service academy graduates, from privileged circumstances which stood “in sharp contrast with the modest origins of war resisters.” U.S. soldiers captured in the South “were mostly enlisted personnel, younger and with less formal education.” And those who joined the controversial “Peace Committee,” during their imprisonment, were also more racially diverse.

James Daly, an African-American infantry man from Bedford-Stuyvesant in Brooklyn, was raised in poverty by a single mother who became a Jehovah’s Witness. In Daly’s own 1975 book Black Prisoner of War, he describes being wounded and held captive by both North Vietnamese soldiers and supporters of the South Vietnam-based National Liberation Front. Daly’s three years of jungle confinement were followed by a two-month trek north to Hanoi on the Ho Chi Minh trail. His closer proximity to the insurgents and civilians on the receiving end of U.S. ordnance gave him a very different perspective on the war than the pilots who dropped the bombs. 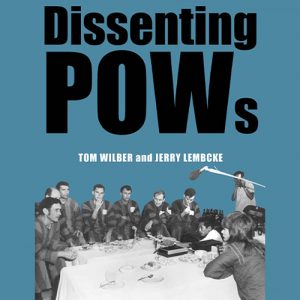 Similarly, Bob Chenoweth, from a white working-class family in Oregon, “developed an empathy for the Vietnamese people and a distaste for the racist views of most Americans toward the Vietnamese.” A helicopter crew member, before he was shot down and captured, Chenoweth “couldn’t see how U.S. forces could possibly be helping the Vietnamese given the attitude that GIs had, viewing them as ‘subhuman’ and disparaging them as ‘gooks and dinks.”

California-native Alfonso Riate is another dissenter, profiled by Wilber and Lembcke. Riate’s father immigrated from the Philippines and married a member of the Karuk tribe. Growing up with his mother’s family, before enlisting in the Marines in 1965, gave Riate early exposure to the hardships and injustices of Native American reservation life. After his involvement with anti-war activity, as a POW and later as part of the Indochina Peace Campaign, Riate moved to the Philippines. There, his opposition to the dictatorship of President Ferdinand Marcos resulted in his untimely death, at the age of 39, in 1984.

Despite his anti-war pronouncements in Hanoi, Abel Larry Kavanaugh, a Chicano from Denver, remained in the Marine Corps, after his return from North Vietnam. But Sergeant Kavanaugh feared that the charges of disloyalty still pending against him and seven others might lead to further imprisonment. On June 27, 1973, he committed suicide, by gun, six days before the Pentagon announced that he, Riate, Chenoweth, Daly, and four other former POWs would not be prosecuted due to “lack of legally sufficient evidence and because of the policy of the Department of Defense against holding trials for alleged propaganda statements.” According to another Peace Committee member, “what Larry did was an attempt to take the pressure from us and put it on the military. He gave his life for us.”

Navy Secretary John Warner’s separate investigation of James Stockdale’s charges against Wilber and Miller did not lead to a court martial either. Instead, the Navy put letters of censure in their files and announced that both would be retiring in “the best interests of the naval service.”

Like Warner, who went on to become a U.S. Senator from Virginia, some of the best-known former POWs had successful careers in politics. Republicans John McCain and Jeremiah Denton both got elected to the Senate; two other ex-POWs later became House members and one served as governor of Indiana. Former Air Force Colonel Leo Thorsness, who won the Medal of Honor for bravery before being shot down over North Vietnam, became a Republican state senator. In 1974, he waged an unsuccessful campaign to unseat U.S. Senator George McGovern, who flew 35 combat missions, during World War II, as a B-24 bomber pilot. According to Thorsness, McGovern’s anti-Vietnam war statements (and legislation he backed) helped prolong his own captivity in Hanoi, while giving “aid and comfort to the enemy,” just like some fellow POWs allegedly did.

On his home turf, McGovern fared much better running against Thorsness than he did nationally, as the much-maligned Democratic presidential nominee who challenged White House incumbent Richard Nixon in 1972. As the authors of Dissenting POWs argue, “fifty years after the war in Vietnam, the acts of conscience displayed there and the reaction they provoked…loom as large as ever in the meaning of war in the nation’s present.”.

Steve Early is a long-time labor activist, member of the Richmond Progressive Alliance, and author of Refinery Town: Big Oil, Big Money, and the Remaking of an American City (Beacon Press, 2017). His book describes environmental justice campaigning in Richmond, California, where Chevron operates one of the largest refineries in California.