The Crisis in Ukraine Is Not About Ukraine. It’s About Germany

“The primordial interest of the United States, over which for centuries we have fought wars– the First, the Second and Cold Wars– has been the relationship between Germany and Russia, because united there, they’re the only force that could threaten us. And to make sure that that doesn’t happen.” George Friedman, STRATFOR CEO at The Chicago Council on Foreign Affairs

The Ukrainian crisis has nothing to do with Ukraine. It’s about Germany and, in particular, a pipeline that connects Germany to Russia called Nord Stream 2. Washington sees the pipeline as a threat to its primacy in Europe and has tried to sabotage the project at every turn. Even so, Nord Stream has pushed ahead and is now fully-operational and ready-to-go. Once German regulators provide the final certification, the gas deliveries will begin. German homeowners and businesses will have a reliable source of clean and inexpensive energy while Russia will see a significant boost to their gas revenues. It’s a win-win situation for both parties.
In a world where Germany and Russia are friends and trading partners, there is no need for US military bases.
The US Foreign Policy establishment is not happy about these developments. They don’t want Germany to become more dependent on Russian gas because commerce builds trust and trust leads to the expansion of trade. As relations grow warmer, more trade barriers are lifted, regulations are eased, travel and tourism increase, and a new security architecture evolves. In a world where Germany and Russia are friends and trading partners, there is no need for US military bases, no need for expensive US-made weapons and missile systems, and no need for NATO. There’s also no need to transact energy deals in US Dollars or to stockpile US Treasuries to balance accounts. Transactions between business partners can be conducted in their own currencies which is bound to precipitate a sharp decline in the value of the dollar and a dramatic shift in economic power. This is why the Biden administration opposes Nord Stream. It’s not just a pipeline, it’s a window into the future; a future in which Europe and Asia are drawn closer together into a massive free trade zone that increases their mutual power and prosperity while leaving the US on the outside looking in. Warmer relations between Germany and Russia signal an end to the “unipolar” world order the US has overseen for the last 75 years. A German-Russo alliance threatens to hasten the decline of the Superpower that is presently inching closer to the abyss. This is why Washington is determined to do everything it can to sabotage Nord Stream and keep Germany within its orbit. It’s a matter of survival.

That’s where Ukraine comes into the picture. Ukraine is Washington’s ‘weapon of choice’ for torpedoing Nord Stream and putting a wedge between Germany and Russia. The strategy is taken from page one of the US Foreign Policy Handbook under the rubric: Divide and Rule. Washington needs to create the perception that Russia poses a security threat to Europe. That’s the goal. They need to show that Putin is a bloodthirsty aggressor with a hair-trigger temper who cannot be trusted. To that end, the media has been given the assignment of reiterating over and over again, “Russia is planning to invade Ukraine.” What’s left unsaid is that Russia has not invaded any country since the dissolution of the Soviet Union, and that the US has invaded or toppled regimes in more than 50 countries in the same period of time, and that the US maintains over 800 military bases in countries around the world. None of this is reported by the media, instead the focus is on “evil Putin” who has amassed an estimated 100,000 troops along the Ukrainian border threatening to plunge all of Europe into another bloody war.

Ukraine is Washington’s ‘weapon of choice’ for torpedoing Nord Stream.
All of the hysterical war propaganda is created with the intention of manufacturing a crisis that can be used to isolate, demonize and, ultimately, splinter Russia into smaller units. The real target, however, is not Russia, but Germany. Check out this excerpt from an article by Michael Hudson at The Unz Review:

“The only way left for U.S. diplomats to block European purchases is to goad Russia into a military response and then claim that avenging this response outweighs any purely national economic interest. As hawkish Under-Secretary of State for Political Affairs, Victoria Nuland, explained in a State Department press briefing on January 27: “If Russia invades Ukraine one way or another Nord Stream 2 will not move forward.” (“America’s Real Adversaries Are Its European and Other Allies”, The Unz Review)

There it is in black and white. The Biden team wants to “goad Russia into a military response” in order to sabotage NordStream. That implies there will be some kind of provocation designed to induce Putin to send his troops across the border to defend the ethnic Russians in the eastern part of the country. If Putin takes the bait, the response would be swift and harsh. The media will excoriate the action as a threat to all of Europe while leaders around the world will denounce Putin as the “new Hitler”. This is Washington’s strategy in a nutshell, and the whole production is being orchestrated with one goal in mind; to make it politically impossible for the German Chancellor Olaf Scholz to wave NordStream through the final approval process.

Given what we know about Washington’s opposition to Nord Stream, readers may wonder why earlier in the year the Biden administration lobbied Congress NOT to impose more sanctions on the project. The answer to that question is simple: Domestic politics. Germany is currently decommissioning its nuclear power plants and needs natural gas to make up for the energy shortfall. Also, the threat of economic sanctions is a “turn-off” for Germans who see them as a sign of foreign meddling. “Why is the United States interfering in our energy decisions,” asks the average German. “Washington should mind its own business and stay out of ours.” This is precisely the response one would expect from any reasonable person.

Then, there’s this from Al Jazeera:

“Germans in the majority support the project, it is only parts of the elite and media who are against the pipeline…

“The more the US talks about sanctioning or criticizes the project, the more it becomes popular in German society,” said Stefan Meister, a Russia and eastern Europe expert at the German Council on Foreign Relations.” (“Nord Stream 2: Why Russia’s pipeline to Europe divides the West”, AlJazeera)

So, public opinion is solidly behind Nord Stream which helps to explain why Washington settled on a new approach. Sanctions are not going to work, so Uncle Sam has flipped to Plan B: Create a big enough external threat that Germany will be forced to block the opening of the pipeline. Frankly, the strategy smacks of desperation, but you have to be impressed by Washington’s perseverance. They might be down by 5 runs in the bottom of the 9th, but they haven’t thrown in the towel just yet. They’re going to give it one last shot and see if they can make some headway. 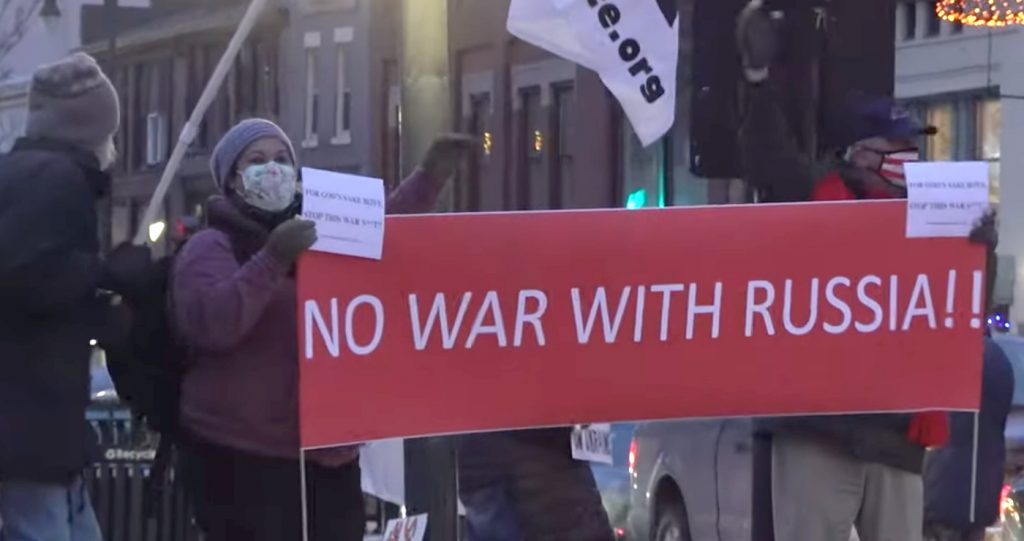 Veterans For Peace members protest against war with Russia.

On Monday, President Biden held his first joint-press conference with German Chancellor Olaf Scholz at the White House. The ballyhoo surrounding the event was simply unprecedented. Everything was orchestrated to manufacture a “crisis atmosphere” that Biden used to pressure the chancellor in the direction of US policy. Earlier in the week, White House spokeswoman Jen Psaki repeatedly said that a “Russian invasion was imminent.” Her comments were followed by State Department flak Nick Price opining that the Intel agencies had provided him with details of an alleged Russian-backed “false flag” operation they expected to take place in the near future in east Ukraine. Price’s warning was followed on Sunday morning by national security advisor Jake Sullivan claiming that a Russian invasion could happen at any time maybe “even tomorrow.” This was just days after Bloomberg News agency had published its sensational and utterly-false headline that “Russia Invades Ukraine”.

Can you see the pattern here? Can you see how these baseless claims were all used to apply pressure to the unsuspecting German chancellor who seemed oblivious to the campaign that was aimed at him?

As one might expect, the final blow was delivered by the American president himself. During the press conference Biden stated emphatically that,

The German chancellor was taken aback by Biden’s comments which clearly were not part of the original script. Even so, Scholz never agreed to cancel Nord Stream and refused to even mention the pipeline by name. If Biden thought he could sandbag the leader of the world’s third biggest economy by cornering him in a public forum, he guessed wrong. Germany remains committed to launching Nord Stream regardless of potential flare-ups in far-flung Ukraine. But that could change at any time. After all, who knows what incitements Washington might be planning in the near future? Who knows how many lives they are prepared to sacrifice in order to put a wedge between Germany and Russia? Who knows what risks Biden is willing to take to slow America’s decline and prevent a new “polycentric” world order from emerging? Anything could happen in the weeks ahead. Anything.

For now, Germany is in the catbird seat. It’s up to Scholz to decide how the matter will be settled. Will he implement the policy that best serves the interests of the German people or will he cave in to Biden’s relentless arm twisting? Will he chart a new course that strengthens new alliances in the bustling Eurasian corridor or will he throw his support behind Washington’s crazed geopolitical ambitions? Will he accept Germany’s pivotal role in a new world order— in which many emerging centers of power share equally in global governance and where the leadership remains unflinchingly committed to multilateralism, peaceful development and security for all– or will he try to prop up the tattered post-War system that has clearly outlived its shelf-life?

One thing is certain; whatever Germany decides is bound to affect us all. 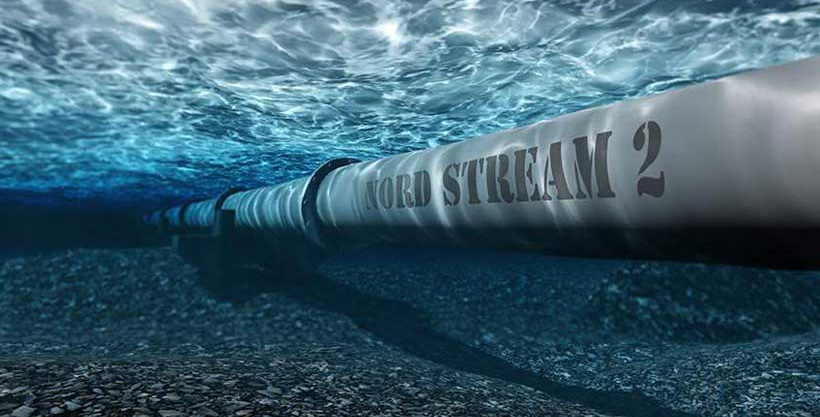 Michael Whitney is a geopolitical and social analyst based in Washington State. His career as an independent citizen-journalist began in 2002 with a commitment to honest journalism, social justice and world peace.