Most farm animals’ lives are hidden from us, from birth to death. But every so often, the curtain slips open and we see what animal agriculture doesn’t want us to see.

Forty cows escaped a slaughterhouse in Los Angeles. Video after video shows them lost, scared, and running for their lives. And during the few hours that this curtain was open, everyone could see the cows as living, breathing, feeling animals––and people cheered for their freedom.

In a gesture of compassion, one of the forty cows was released to live her life to the fullest at Farm Sanctuary in Acton, California.

It was early evening when the cows fled Manning Beef, a slaughterhouse in Pico Rivera. But once outside of the gate, they had nowhere to go. They were in a seemingly endless maze of streets and houses and yards.

Soon, the Los Angeles County Sheriff’s Department was getting calls; the group was now a mile from the slaughterhouse––and a herd of scared, disoriented cows isn’t stealthy. They were racing through a neighborhood, crashing through fences, flattening bushes, likely trying to find somewhere, anywhere, that felt safe.

“Seeing these cows escaping their horrible fate broke my heart”
Ranchers and police gave chase on foot, in cars, and on horseback. Lights flashed, helicopters droned, cars honked, and searchlights swept the area. The herd galloped on in terror, colliding with vehicles and mailboxes; onlookers reported the animals were injured and bleeding. Cows were roped, wranglers were dragged. A deputy shot and killed a frightened cow who got too close to a family.

What Happens When We Meet Our Meat

It’s important to note that while this was a scary event for residents, this was an absolutely hellish experience for these sensitive animals. Words like “fear,” “scared,” or “terror” are not used lightly, nor are they intended to anthropomorphize. Science shows cows are contemplative, social animals––and stress is contagious.

In this stolen moment between transport and slaughter, these cows––and their obvious fear––had the rare chance to be seen by the public. As news of the escape spread, onlookers arrived to take photos and videos. More people cheered them along on social media. And here is the truth that the animal agriculture industry wants us to ignore: When we actually get the chance to see cows, especially those fighting for their survival, we want them to live.

‘It sounded like thunder.’ Forty cows stampede through a Pico Rivera neighborhood after a slaughterhouse breakout. https://t.co/r1mHfTK8ki

The conversation was particularly pro-cow when news came out that one cow had completely vanished––in crowded Los Angeles, of all places. She was found more than a day later, two and a half miles away in a park. She, too, was put onto a trailer and returned to the slaughterhouse. Folks on social media crossed their fingers for her and, thankfully, her story didn’t end there.

A Step Toward Compassion

In a rare turn of events: Pico Rivera’s City Manager, Steve Carmona, stepped in to help facilitate the release of the lost-then-found cow to Farm Sanctuary. This arrangement was also possible thanks Grammy Award-winning songwriter Diane Warren, Vice President of Social Compassion in Legislation Simone Reyes, and countless others who worked behind the scenes.

“Seeing these cows escaping their horrible fate broke my heart,” said Warren. “They knew what awaited them. These are smart, empathetic, beautiful souls. What Paul McCartney said is so true: if slaughterhouses had glass walls, everyone would be a vegetarian.”

“If slaughterhouses had glass walls, everyone would be a vegetarian”

The city made the announcement at a press conference Thursday morning. Holding a press conference about saving just one animal may seem strange, especially as the other 38 were sent to slaughter. But it shows that the city, the media, and the slaughterhouse heard the people––and the people were calling for compassion. To ignore her demonstrated will to live would have appeared cruel.

“This last cow is going to live the rest of its life in a sanctuary,” said Erik Lutz, a Pico Rivera City Council member. “We do have feelings as humans for animals and I think this symbolic gesture is that.”

These animals became visible and tapped into our empathy––and they ignited a conversation about the ethics of eating animals.

The (First) One Who Made it to Sanctuary

On Saturday, we welcomed the arrival of the as-of-yet unnamed cow. She is definitely a fighter! The 1,200 lb. Angus is very very hesitant and fearful of humans to the point of showing signs of aggression, which is understandable considering everything she has gone through, especially in the last few days.

A missing cow who was part of a herd of cattle that slipped out of a local slaughterhouse earlier in the week resurfaced at Whittier Narrows in South El Monte on Thursday morning @MarkKonoSky5 reports https://t.co/nmbf5sUraW

She will most likely relax as the days go on and she comes to recognize that we aren’t going to hurt her, though she may never really warm up to humans fully. But that is one of the great parts of Sanctuary: we don’t force her to like us or spend time with us. She is able to live out her life in whatever way she wants. But for now, she is happy to be here and to have lots of open space to roam and free from the sounds and smells of slaughter.

This also marks the beginning of her thirty-day quarantine period in our back ISO pasture. Over the next few weeks, our Shelter Team will wear gloves, booties, and scrubs as they assess her health and run a few tests.

“They knew what awaited them. These are smart, empathetic, beautiful souls.”
All of this is to make sure she doesn’t have anything she could pass on to our other residents. They’ll also be monitoring her to make sure she’s eating, drinking, and defecating normally. If we see any signs of illness, we will call in a vet.

These first days, though, are just for her to settle in. We’ll try to be as hands-off as possible while she adjusts to her new home––she has been through quite an ordeal and she needs some time to rest.

If Manning Beef sounds familiar, it’s because this isn’t the first time they’ve shown mercy and compassion for these animals. This cow will be joining other Manning Beef survivors at Farm Sanctuary including Liberty and Indigo, who were rescued with the help of actor and activist Joaquin Phoenix. Jackie also came from the same place, as did Frida, Amelia, Jade, and Juno––the latter two found forever homes at Charlie’s Acres. 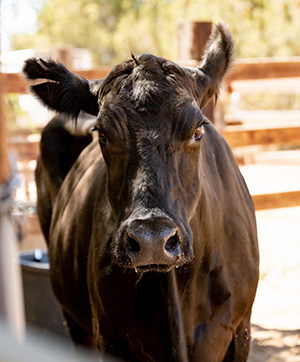 The second survivor arrives at Sanctuary.

It turns out, a second cow had evaded capture after escaping the slaughterhouse. She survived on her own, without care, and went undetected for eight days. She was found Wednesday morning at a park in La Puente, California, about 12 miles away from the slaughterhouse. After failing to corral her with police cars, officers from the Baldwin Park Animal Care Center eventually roped the exhausted Angus.

On Thursday afternoon, we welcomed her home to our Acton Sanctuary. When our team picked her up, she was petrified, shaking so badly that all she wanted to do was lie down, but she was so afraid, she kept charging in fear. She is thin and dehydrated after 8 days on the run through the streets of LA fueled by nothing but fear, instinct, and the will to live.

“The entire nation found themselves rooting for a herd of escaped cows to make it to freedom and not end up on someone’s dinner plate,” said Reyes. “Getting two of the cows out alive, thanks to the compassion of Pico Rivera officials, the generosity of Manning Beef, and the tireless lifesaving work of Farm Sanctuary will go down as one of my proudest moments as an activist.”

“We are glad to see a positive outcome for the future of this last remaining cow,” said Carmona. “I’m personally glad the owner of Manning Beef realized the positive nature of this generous gesture of giving this animal to Farm Sanctuary.”

We are grateful to Manning Beef, Steve Carmona and the City of Pico Rivera, Simone Reyes, Diane Warren, Lisa McGinnis, to those who ensured they were captured alive, and the countless others who have been instrumental in the release of both escaped animals to Sanctuary.

Also, a huge thank you to our incredible Shelter team, who have been working tirelessly to make sure these two cows are as stress-free and comfortable as possible. We’re so grateful for you all!

These resilient cows are the only survivors of a mass escape from a slaughterhouse.
And one last update: the first cow to arrive officially has a name: June B. Free. June was named by Lisa McGinnis, a compassionate Farm Sanctuary supporter who provided a generous donation to support June’s care, and Diane Warren, who helped make June’s rescue possible. Lisa’s gift will also help us continue to rescue and care for other farm animals in need, and we are beyond grateful for her generosity.

While we wish we could have rescued all forty of the lives this week, we know the animal agriculture industry wouldn’t allow it. And with 10 billion animals killed for human consumption each year in the U.S, we also know that we cannot rescue our way out of this—we need system change.

The purpose of Sanctuary is to heal the animals who have been rescued. Through their stories, we raise awareness of a food system that is fundamentally oppressive to animals, people, and the planet.

Please share their stories to help spread the word that every farm animal is deserving of compassion and care.

Farm Sanctuary fights the disastrous effects of animal agriculture on animals, the environment, social justice, and public health through rescue, education, and advocacy.