President Luis Arce thanked Bolivian citizens for their overwhelming support, and promised to continue working to rebuild the country and the economy with the people.

Reprinted from the People’s Dispatch

Thousands of Bolivians, who undertook a 180-km and seven-day-long journey on foot from the town of Caracollo in the Oruro department under the banner of ‘March for the Homeland,’ arrived in the capital city La Paz on November 29. The historic march, which was organized in defense of democracy and in support of President Luis Arce’s government, concluded with a massive rally at the San Francisco plaza in La Paz.
The head of state promised to continue working to rebuild the country and the economy with the people.

Over 1.5 million workers, women, students and peasants from across Bolivia joined the rally in the capital and expressed their approval of the national government of the ruling Movement Towards Socialism (MAS) party, and their rejection of the destabilization attempts by the far-right opposition sectors. Holding national flags, Indigenous Wiphala flags, placards demanding justice for Sacaba and Senkata massacres’ victims, respect for the 2020 election results, rejecting coup attempts by the right-wing forces, hundreds of thousands of Bolivians flooded the plaza and the surrounding streets for several blocks.

The march was presided over by former president and the current head of MAS, Evo Morales. It was led by the Pact of Unity, a national alliance of grassroots organizations, and the Central Obrera Boliviana (COB), the country’s trade union center. Numerous social movements, trade union federations of different sectors, neighborhood associations, popular organizations, which are not affiliated with the Pact of Unity and the COB, also joined the march and the rally.

“The right did not forgive us for having guaranteed sovereignty and dignity for the Bolivian people. They gave us a coup and established a de-facto government to steal and massacre,” recalled Evo Morales.

The head of state promised to continue working to rebuild the country and the economy with the people. “We listen to the voice of the people, we always have, we maintain that line. We know that the mandate is from you to us. We are never going to abandon you, or to make policies against you. As the people have always shown, today like always, they have not let us down or abandoned us,” said Arce.

Vice president David Choquehuanca condemned the far-right sectors for promoting destabilization against a democratically elected government. “The Bolivian oligarchy seeks to ignore Arce’s victory in the 2020 elections to carry out a coup d’état similar to that of 2019, in which 37 people lost their lives, and hundreds were injured. Extremist sectors only defend democracy when it is useful to them. We develop a peaceful but firm march to demonstrate the continuity of the process of change for our people and our respect for democracy,” said the vice president. 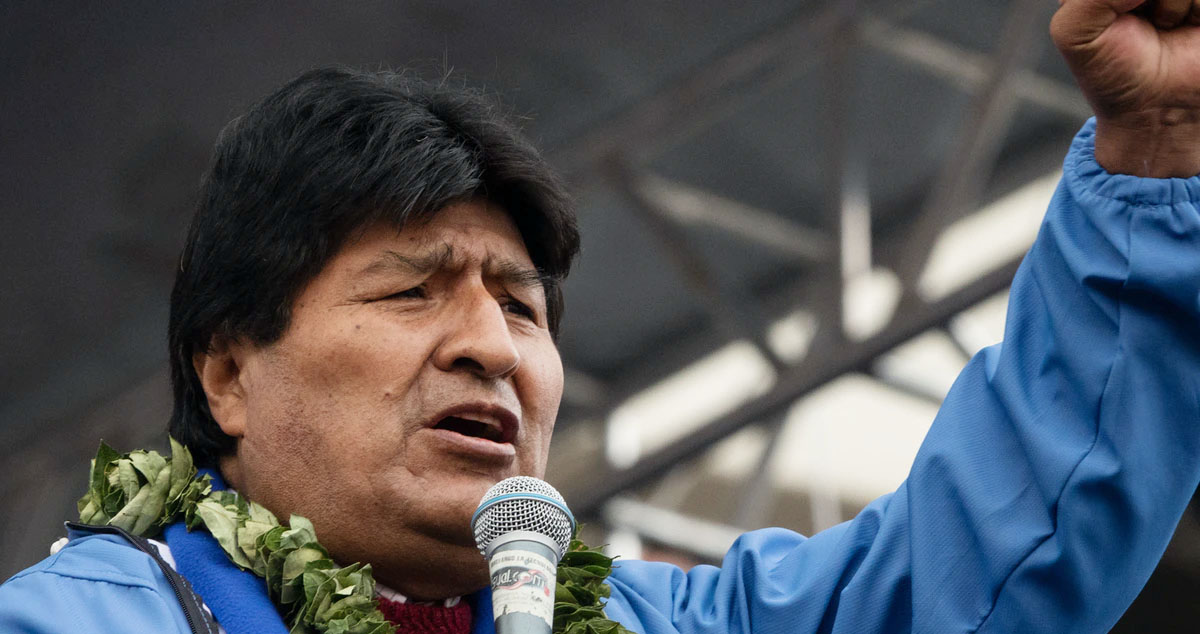 Former president Morales also condemned that extremist factions intend to usurp the powers of the State. He recalled that “the right did not forgive us for having guaranteed sovereignty and dignity for the Bolivian people. They gave us a coup and established a de-facto government to steal and massacre,” but emphasized that “this time the people are organized and will defend their president.” “This is the march for the Homeland. When democracy is in danger, the dignified people mobilize. The opponents have to know that the rebellion of the dignified people is above the right-wing vendor,” he added.

Morales also warned the opposition sectors “not to provoke the people,” and said that “the march was a warm-up in defense of democracy, the legally constituted government of Luis Arce and David Choquehuanca and its plans.”

The executive secretary of the COB, Juan Carlos Huarachi, highlighted that the march was the result of the conscience of the Bolivian to defend democracy. “This march is not paid, bought, or financed, this march is due to the conscience of the Bolivian people with their conviction and principles. We have not come to generate violence, but if they provoke us, here are the united people! These people will defend the homeland, democracy, Lucho and David, our process of change and the votes cast at the polls,” said the union leader.

The executive secretary of the National Confederation of Native Indigenous Peasant Women of Bolivia ‘Bartolina Sisa’, Flora Aguilar, said that another coup will not be allowed. “This great march, of more than 1 million, says that we are not going to allow another destabilization of our government. Our government was democratically and peacefully elected at the polls and for this reason we are going to enforce it in this stage of reconstruction of our economy,” she said.

At the conclusion of the rally, all the union and social leaders demanded that the prosecutor’s office and the judiciary guarantee justice for the victims of the massacres as well as prosecute those responsible for the 2019 coup against former president Morales.

Tanya Wadhwa is a journalist with People’s Dispatch.