As the 2020 Tokyo Olympics approached, fans around the world struggled to balance their excitement with a general uneasiness surrounding the games. These included high-profile firings, volunteers quitting, abnormally high temperatures, low vaccination rates as well as a declared state of emergency amidst surging COVID-19 cases.

While there were many engaging story lines and developments worth following over the last 14 days, the prominence of Black women was hard to ignore.

From the outset of the Games’ opening ceremony, where Naomi Osaka lit the Olympic cauldron, it quickly became evident that Black women would be of central importance to the games and stories that followed.

Coming off a tumultuous exit from the French Open and Wimbledon, Osaka gleefully stated that lighting the cauldron was her biggest athletic achievement to date.

Osaka, of Haitian and Japanese descent, was the first tennis player to ever light the Olympic cauldron. Despite her early exit in the Olympic tennis tournament, she had already won.

Too often, Black women’s participation in sport is questioned, negated or simply unnoticed. 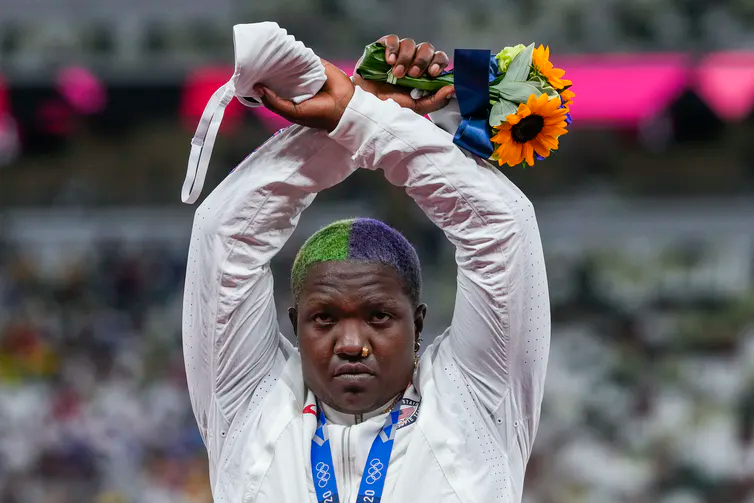 Raven Saunders of the United States poses with her silver medal she earned in women’s shot put making an X with her arms. Photo: AP/Francisco Seco

Gymnastics typically account for the highest TV ratings for women’s sport at the Olympics. The competition was marketed around African American Simone Biles, the global superstar who is a 32-time Olympic and world medallist.

Biles shocked the world this year by pulling out of the all-around team gymnastics competition. A slew of demeaning “takes” then flooded both news and social media.

Black women often challenge these narratives and in doing so are (not so) quiet champions for a variety of social justice issues both in and outside of sport. As the Black feminist Combahee River Collective reminds us, “the only people who care enough about Black women to work consistently for our liberation are Black women.” 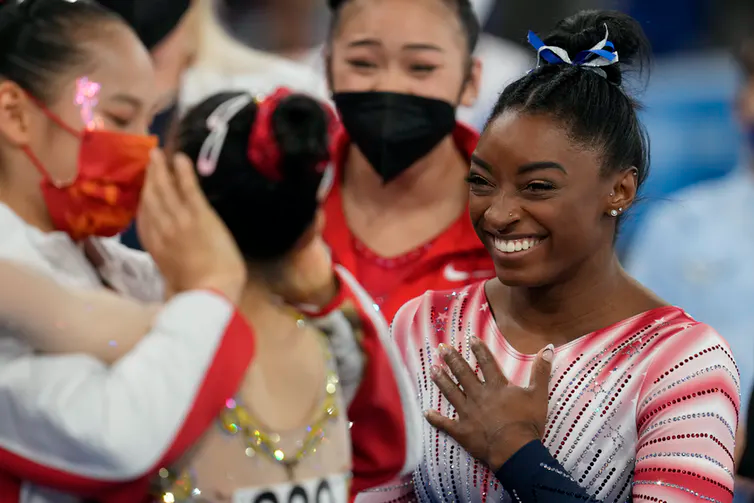 Simone Biles smiles as Tang Xijing of China embraces teammate Guan Chenchen after she won the gold medal on the balance beam during the artistic gymnastics women’s apparatus final at the Tokyo Olympics. Photo: AP/Natacha Pisarenko

Following her withdrawal from the team competition, Biles then dropped out of additional events, leaving the beam her only remaining competition. The world debated, scorned and applauded her efforts yet once again, a Black woman cleaved open the conversation about the mental health of athletes.

Black Women at the Olympics

As the competition carried on, athletes, celebrities and politicians came out in support of Biles and her decision. This compassion started to shift the seemingly impenetrable narrative that a gold medal is the only success worth celebrating at an Olympic competition.

Biles’s journey at the Olympics was framed as an act of rebellion against sporting federations, including the International Olympic Committee (IOC) which was recently held accountable for the mistreatment of athletes. Athletes are no longer remaining silent about overly restrictive rules including those that limit sociopolitical expression.

African American athlete Raven Saunders deserves credit and celebration over her silver medal in shot put. Rule 50, which states that “every kind of demonstration or propaganda, whether political, religious, or racial, in the Olympic areas, is forbidden”, was visibly contested by Saunders when she raised her two arms in the air to form an X on the podium. She stated that her medal represented where the “oppressed meet.”

Saunders went on to say that the IOC will “never take her silver away.” Hammer throw teammate Gwen Berry raised a fist in protest of the investigation the IOC opened after Saunders’ noncompliance, which was since put on hold after the death of her mother.

In addition to increasing empathy for Black women and their intersectional plights, there was also a recognition of the athletic feats of Black women especially in sports historically dominated by white women.

U.S. wrestler Tamyra Mensah-Stock became the first Black woman to win gold in freestyle wrestling. Dutch runner Sifan Hassan defied all odds by winning her 1,500-metre heat, despite falling at the beginning of the final lap. Hassan went on to win gold in the 5,000 metres, bronze in the 1,500 metres and gold in the 10,000 metres. 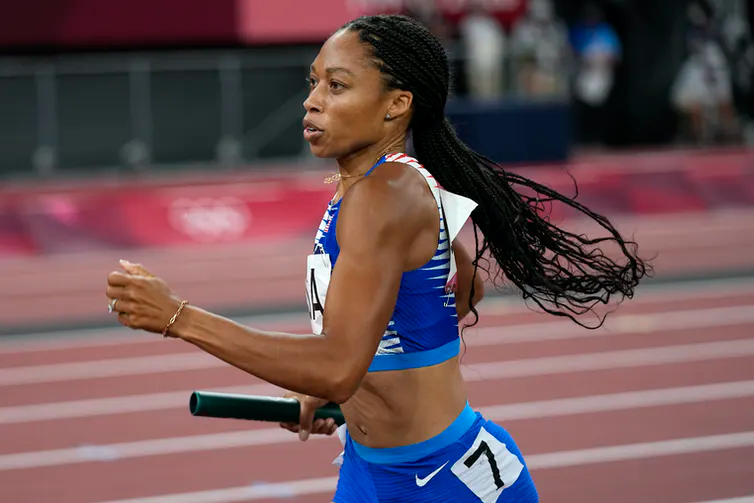 Sprinter Allyson Felix, champion of Black maternal health, now dons the title of the most decorated track and field athlete in history. Her bronze medal performance in the 400-metre event signalled a win for motherhood, donning her newly designed shoe, after her sponsorship was slashed by Nike after becoming pregnant.

Namibian runners were wrongly denied entry into the Olympic 400-metre competition by the International Association of Athletics Federations (IAAF) due to sexist, antiquated rules that regulate only women’s testosterone levels — they were subsequently allowed to compete in the 200 metres. Christine Mboama captured silver, while Beatrice Masillingi finished fifth.

The IOC and IAAF might have unfairly felt a bit of vindication from this result, and the fight against sex and gender testing that overwhelmingly discriminates against Black and racialized women is consistently being challenged and led by Black women.

Beyond the Finish Line

Black women were once again trailblazers in Tokyo, shouldering the burden of contesting archaic and unfair rules and lack of accommodations. The Games may be over, but the legacy of the Black women athletes will be the rupture of destructive and limiting beliefs.

This legacy has the potential to permeate long after the medal ceremonies and homecoming celebrations. Compounded with COVID-19, athlete health is beginning to take precedence over any hardware or harmful narratives about pushing through injury, racial trauma or mental health issues.

We must thank the athletes, and particularly Black women, who continue to take risks, sacrifice and endure the pain and emotional turmoil of being game changers in racist and misogynist sport systems. Flourishing, experiencing joy and being supported remain conditional for Black women athletes — these athletes managed to shine brighter than gold, triumphing on their own terms.

This article is republished from The Conversation under a Creative Commons license. Read the original article.