President Biden: De-Escalate in Ukraine, Do Not Risk Nuclear War!

“The first casualty of war is truth.”

This simple yet profound statement is attributed to many, including Hiram Johnson in a speech in the U.S. Senate in 1918, during the “war to end all wars.” Hiram Johnson was a progressive Republican who had been elected to the Senate from California that very year. He remained in the Senate until he died of old age on August 6, 1945, the day the U.S. dropped an atomic bomb on the civilian population of Hiroshima, Japan.

The Baltimore Sun quoted Senator Johnson more fully in 1929, during a Senate debate on an international agreement called the “General Treaty for the Renunciation of War as an Instrument of National Policy” (also known as the Kellogg-Briand Treaty):

Combat is eclipsed by well-practiced information warfare
“The first casualty when war comes is truth, and whenever there is a war, and whenever an individual nation seeks to coerce by force of arms another, it always acts and always insists that it acts under self-defense.”

As the war rages in Ukraine in 2022, actual combat is eclipsed by well-practiced information warfare. It was not surprising when the White House and State Department began shouting that the Russians were about to launch a “false flag” event to justify their pending invasion of Ukraine. After all, isn’t that the way it is always done? Isn’t that the way the US did it with the Tonkin Gulf Incident in Vietnam, babies being thrown out of incubators in Kuwait, and Weapons of Mass Destruction in Iraq. Of course, the US has a bigger challenge claiming self-defense as it invades smaller, weaker countries halfway around the globe.

Once the fighting commences, deception is also an important ploy on the battlefield. The ancient Greek playwright Aeschylus wrote, “God is not adverse to deceit in a just cause.” Aside from keeping the enemy guessing about when and where the next attack will be launched, it is critically important to maintain popular support for a questionable enterprise that requires the sacrifice of blood and treasure.

Twenty-four hour cable news coverage of the ugly war in Ukraine is keeping Americans hyped up and dumbed down. The very real horror of war is on the screen for all to see. The bombed-out buildings, the mounting civilian casualties and the frightened refugees speak their own truth. Unfortunately, we rarely see the victims, the grieving families and the terrified refugees when the invader is the US. The “shock and awe” US terror bombing campaign on Baghdad was described by one network TV anchor as a “beautiful thing to see.”

Coverage of the ugly war in Ukraine is keeping Americans hyped up and dumbed down
Totally absent from nonstop coverage of the war and condemnations of Russian president Putin is any reporting on the role of the United States and NATO in creating the crisis over Ukraine. No reports about the relentless NATO expansion up to the very borders of Russia. No mention of US missile emplacements in Romania and Poland. Nothing about the unilateral US exit from vital nuclear treaties – the Anti-Ballistic Missile Treaty (George W. Bush, 2002), and the Intermediate Nuclear Forces Treaty (Donald Trump, 2018).

Such reporting would be unpatriotic in a time of war, would it not? We don’t want to justify Russian aggression. We don’t even want to hear their side of the story. A simplistic, one-sided narrative tells us that Vladimir Putin – who is both evil and mad – has initiated a war in order to rebuild the former Russian empire. Who knows where he might stop? There is absolutely no evidence to support this implausible narrative. But the truth be damned. This is war.

President Biden is demonstrating at least a bit of prudence. The president must make life-and-death decisions that are somewhat based in reality. He is resisting the growing calls for a No Fly Zone in Ukraine. He and the generals at the Pentagon know what that means. Even the usually pugnacious Senator Marco Rubio stated “it means World War III.” Yet pressure is growing for a No Fly Zone – maybe a “limited” one – as both Republican and Democratic leaders take their turn on top of the war wagon.

Joe Biden is also worried about nuclear war, a serious concern for all modern presidents. Vladimir Putin is brandishing his large nuclear arsenal as a disincentive for direct US/NATO engagement in the Ukraine war. The US canceled a planned ICBM test launch from Vandenberg Space Force Base in California to its usual target in the much-bombed Marshall Islands. Apparently, the US did not want to risk spooking Putin, about whose mental state many people are speculating. Could it be that Putin is employing Richard Nixon’s famous “madman theory,” keeping his enemies at bay with unpredictability?

Of course, Russia has its own propaganda apparatus, but we will not be much exposed to it here in the US. Russia Today (RT) has been removed from most cable TV services as well as from YouTube. Well actually, almost everything Russian is currently being canceled, in a furious frenzy of Russia-hating that has been central to US culture ever since World War II. The Russians are never given credit for their outsized role in defeating the Nazis, nor sympathy for the 27 million lives lost in that war.

The Russian invasion is a violation of the UN Charter, but hardly unprecedented. International law in no way restrained US war-making in Vietnam, the Dominican Republic, Panama, Grenada, Afghanistan, Iraq, Libya, Syria, Somalia or Yemen. Russia’s invasion was not in self-defense – except in a preemptive sense – they were not under immediate military attack.

Some say that the ongoing Ukrainian war against two breakaway Russia-aligned provinces in eastern Ukraine provided Just Cause for Russia’s invasion. Fourteen thousand people have died in the violence there since 2014, when a US-backed coup overthrew a Russia-friendly president and replaced him with someone handpicked by the US. An annoying factoid that.

Another annoying factoid is the well-documented role of Nazi militias in the 2014 coup and in the current government and military. These inconvenient truths in no way justifies the blatant Russian aggression, however, which is killing hundreds of innocent civilians and has created a dangerous crisis for humanity.

The Information War Presents the Peace Movement with a Dilemma

The nonstop barrage of information, misinformation, disinformation and rallying around the flag has presented the peace movement with a dilemma. How do peace-loving people righteously condemn the Russian invasion – the destruction of cities, the killing of hundreds of civilians, the displacement of millions? How do we express our outrage and our strong disapproval of this aggression and violence without appearing to join in the war fervor that is sweeping the US?

Conversely, how do we explain the role of the US and NATO in creating this crisis without appearing to justify this horrible violence? How do we demand that President Biden stop pouring fuel on the fire by sending more weapons into Ukraine? How do we tell people that sanctions are not an alternative to war, but rather an escalation of war?

Escalation is the very last thing we want. The Ukraine war presents the entire world with an existential threat. It is not alarmist to say this is the greatest imminent threat of nuclear war since the Cuban Missile Crisis of 1962. The one where the US was reacting to Russian nuclear missiles being positioned in Cuba, way too close for comfort. Does that ring a bell? 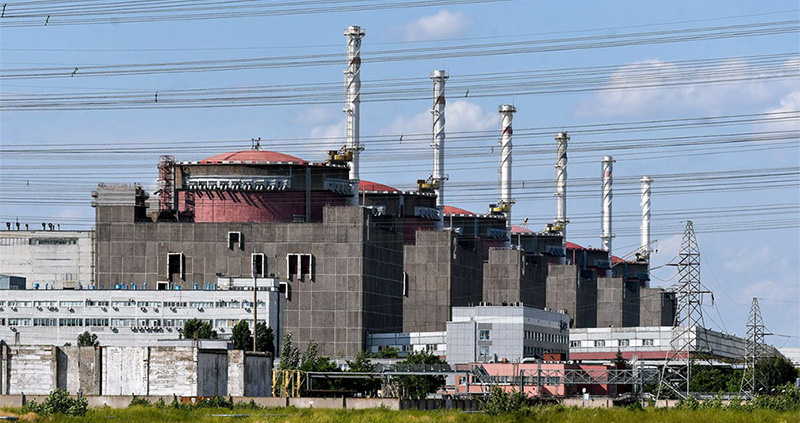 The Danger of Nuclear War Should Focus Our Attention

The very real danger of nuclear war should focus all our attention. With both US and Russian nukes on “hair-trigger alert,” what could go wrong? And then there are the 15 or so nuclear power plants in Ukraine, several of them reportedly compromised by the war. Is that a real threat or is it war propaganda? Perhaps both. It is in EVERYBODY’s interest to end this very dangerous war as soon as possible.

It could even lead to a civilization-ending nuclear war
Joe Biden is not new to this conflict. Biden and – famously – his son Hunter, have been involved in the Ukraine mess at least since the 2014 coup, after which a Ukrainian oil company paid Hunter Biden $50,000 a month to sit on its Board. No conflict of interest there, all the Democrats insisted. Even without family enrichment, Joe Biden has long been dedicated to the Cold War project of putting the Soviet Union – and now Russia – in its place, which is no place, and with no respect.

The United States leads NATO – the Supreme Allied Commander in Europe is always a U.S. general. President Biden probably could have headed off the Russian invasion by simply saying publicly that Ukraine would not become a member of NATO. But he refused to do that. He called Putin’s bluff, and Putin showed him it was no bluff.

President Biden Must Act Now to De-Escalate this Dangerous War

Whatever disagreements there are about how the Ukraine war came about, reasonable people should be able to agree on this: This war is very dangerous. It threatens to become a wider war in Europe. It could even lead to a civilization-ending nuclear war. It therefore must be brought to an end as soon as possible.

President Biden is in a position to make a bold diplomatic move that could bring this war to a screeching halt. Instead of pouring in weapons and piling on sanctions, we should call on President Biden to begin good faith negotiations with all concerned parties, respecting each of their security concerns.

Once the world has – hopefully – pulled back from the brink, we should begin a serious international discussion about how to abolish nuclear weapons and war once and for all. How will we avoid getting into the same kind of war with China over Taiwan? How can the United States adjust to a multi-polar world where it is no longer The Sheriff?

Veterans For Peace is offering its own Nuclear Posture Review, with sections on Russia and Europe and all the nuclear powers. It makes well-researched recommendations, such as implementing No First Use policies and taking nuclear missiles off “hair-trigger alert.” It calls on the US to rejoin the ABM and INF treaties, and to sign the Treaty on the Prohibition of Nuclear Weapons. It calls on the U.S. to initiate negotiations “to reduce and eventually eliminate all nuclear weapons,” as the five permanent UN Security Council members – the original nuclear powers – agreed when they signed the 1970 Nuclear Nonproliferation Treaty. If the United States and other nuclear powers had kept their promise to eliminate nuclear weapons, we would probably not be at war today in Ukraine, or worrying about Armageddon.

Gerry Condon is a Vietnam-era veteran and war resister, a former president of Veterans For Peace, and a member of the crew that sailed the Golden Rule to Cuba. He can be reached by email at gerrycondon@veteransforpeace.org.