Beyond Vietnam and Into Today

A year to the day before his assassination, Martin Luther King publicly and decisively denounced not only the U.S. war in Vietnam but the militarism that enabled the war and undermined American society. King’s Beyond Vietnam sermon, delivered on April 4, 1967, at New York’s Riverside Church, was as predictive as it was powerful and prophetic. Its meaning and value exist today as much as they did nearly 55 years ago.

King rightfully tied together the overarching and commanding militarism of the United States with the economic, societal and cultural demons plaguing America. Much as President Dwight Eisenhower had done in his farewell address six years earlier, King set about to make clear the insidious nature of the reality of that militarism through not only overseas warfare and a controlling military-industrial complex but the demeaning and diminishing effects it had on the American people. King understood and communicated the war in Vietnam as “a far deeper malady within the American spirit.” The shameful and hideous deaths it brought overseas were the substance of America’s wreckage. He summarized his purposes in opposing the war in Vietnam as an attempt to save America’s soul. 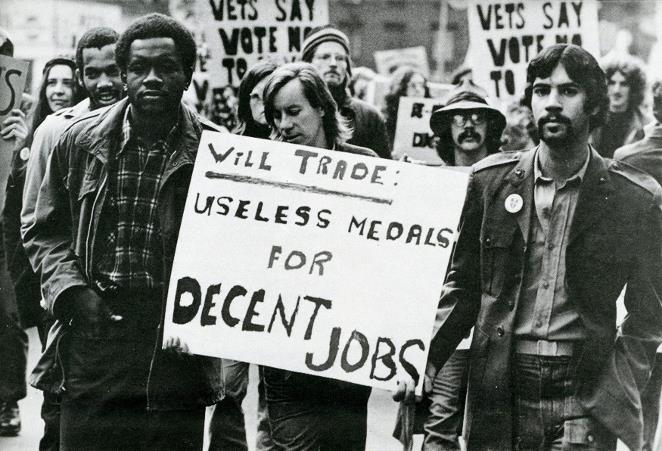 Most apparently, there was the physical and psychological destruction of the Vietnamese, as well as the destruction of American working families. By April 1967, more than 100 Americans, most of whom we would accurately describe as boys, not men, were killed weekly in Vietnam. As we burned the Vietnamese with napalm, we were “filling U.S. homes with orphans and widows.” Those returning from the “dark and bloody battlefields [were] physically handicapped and psychologically deranged.” The metastatic effect of this overseas violence on American society was as foreseeable as it proved to be self-destructive. King warned:

We can no longer afford to worship the god of hate or bow before the altar of retaliation. The oceans of history are made turbulent by the ever-rising tides of hate. And history is cluttered with the wreckage of nations and individuals that pursued this self-defeating path of hate.

King understood that American violence overseas and at home were not simply reflections of one another but were interdependent and mutually reinforcing. In his sermon that day, King was not only speaking to the present circumstances of that particular war in Vietnam but was describing a madness within American politics, economics and culture that had no time limit or adherence to generation. Fifty-five years later, the wars have continued both at home and abroad. Since 1991, the United States has conducted more than 250 military operations abroad. In that killing and ruin, we see in the United States tens of thousands murdered annually and the world’s largest prison population.

King noted how this violence permitted the disregard of racial norms in the United States, as all things become subservient to the purpose of the violence. Young black and white men, who would not be allowed to live in the same neighborhoods or go to the same schools in the United States, were, in Vietnam, able to burn the huts of the Vietnamese poor in “brutal solidarity.” His government was the “greatest purveyor of violence in the world.” In the U.S. government’s pursuit of that violence, all other things must be made subordinate, including the welfare of its people.

To King, the American poor were just as many enemies of the American government as the Vietnamese. However, American war and militarism had allies as they did enemies. In what may be the most famous passage of his sermon, King presages an actual axis of evil: “When machines and computers, profit motives and property rights, are considered more important than people, the giant triplets of racism, extreme materialism, and militarism are incapable of being conquered.”

The consequences of this prioritization of violence are as inevitable as they are profane. Hundreds of thousands of Americans died in the COVID pandemic from an inability to pay for health care. As Congress approved an increase of $80 billion for the Pentagon in December, it cut school lunch programs. Sixty-three percent of Americans live paycheck to paycheck, with annual multi-digit increases for overhead costs like healthcare, housing, utilities and education; corporations make record profits and barely pay taxes. Life expectancy for Americans has declined two-and-a-half years in two years, just as the first and third biggest killers of our children are guns and overdoses…

I described King’s sermon as being powerful, prophetic and predictive. It was also radical and evocative. King called for a “true revolution of values” to upend, dispel and replace the evils of racism, materialism and militarism that control the American government and society. He laid out real and defined steps to end the war in Vietnam just as he prescribed remedies for the malady of the American spirit. We did not follow them.

King understood where America would go beyond Vietnam. He recognized and pronounced the realities of the triplets of evil, a national spiritual death and a war against the poor. He understood how those realities were a societal choice and how they would worsen, and he spoke so. Martin Luther King was murdered a year to the day for such an articulation.

Matthew Hoh is a member of the advisory boards of Expose Facts, Veterans For Peace and World Beyond War. In 2009 he resigned his position with the State Department in Afghanistan in protest of the escalation of the Afghan War by the Obama Administration. He previously had been in Iraq with a State Department team and with the U.S. Marines. He is a Senior Fellow with the Center for International Policy.