While the world turns away, “there is fuel in the air” as a record number of Palestinians in and around occupied East Jerusalem lose their homes, either pitilessly razed by middle-of-the-night bulldozers or brazenly seized by jeering Israeli settlers with the so-called laws of occupation on their side. In 2020, 140 Palestinian families lost their homes, about double the number in 2019, a surge in Israel’s ethnic cleansing many see as part of a “100 year Zionist project” to appropriate “Jerusalem whole and united.” The escalation comes amidst a recent wave of violence against Palestinians who’ve been protesting the closure of the iconic Damascus Gate during Ramadan; hundreds have been injured by mobs of Jewish settlers shouting “Death to Arabs” and “Burn them!” in the name of “restoring Jewish dignity.” As a result of the multi-pronged assaults on Palestinian rights, the city is “on the brink of explosion” — this, despite the claim by a breathtakingly arrogant, ignorant Jared Kushner that “we are witnessing the last vestiges” of the decades-long conflict, which he terms a “real-estate dispute.” 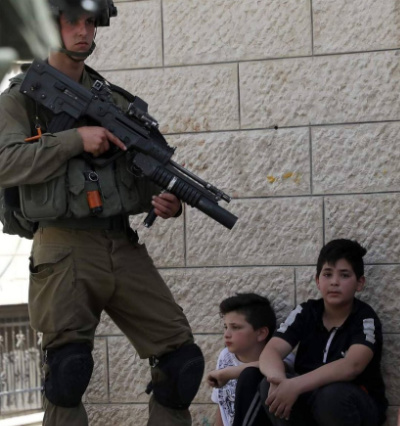 “Kushner regrets nothing,” says one critic, “because he has God on his side.” Israel’s latest surge in forced removals has prompted threats of retaliation from Hamas and ongoing Palestinian protests, which police have met with teargas, attacks and arrests, further inflaming emotions and giving rise to a young, fearless, leaderless new Palestinian resistance to “expulsion at the barrel of a gun.” “It is a Nakba,” say Jerusalem residents, some of whom see the theft of homes and land where their ancestors lived and died. “We are seeing our neighborhoods being wiped out in front of our eyes.”

… hundreds have been injured by mobs of Jewish settlers shouting “Death to Arabs” and “Burn them!” in the name of “restoring Jewish dignity.”
Many of the forced removals are in the neighborhood of Sheikh Jarrah, where residents have been fighting a months-long battle against both Jewish settlers who want their homes and an unjust “settler-colonial court, judge and jury” with little interest in challenging ownership claims by what remain illegal settlers. In the latest clash, an Israeli judge just ruled that six Palestinian families of 27 people fighting eviction have until Thursday to “reach a deal” with the settlers trying to steal their homes, urging Palestinians to concede the settlers’ ownership and pay them rent – a demand they rejected. “These are our homes,” they assert, “and the settlers are not our landlords.” “All my memories are here – it’s like uprooting me,” says one resident. “Every stone in this house tells a story about me. My school days were here, my children grew up here, everything is here.” From another, “All the atrocities in the world don’t exceed 10% of what they do to us in order to expel us from our own homes.”

Meanwhile, anguished scenes play out on social media. An older Palestinian woman confronts smirking settlers newly ensconced in her house: “This is my house, not yours.” Surly settler behind gate: “I’m here now.” Woman: “This is my house, this is my door, you are a thief.” Settler: “The court gave it to me. This place is only for Jews.” Her plaintive query: “Who do you ask for your rights, when the judge is your enemy?” Across Sheikh Jarrah, many older residents have voiced their rage and grief by spray-painting on walls, “We will never leave.” But their powerlessness is palpable. “If this is not an occupation, what is?” asks a pained neighbor of the wide-ranging devastation. Hence the sign of one protester: “Sheikh Jarrah Is Palestine.” 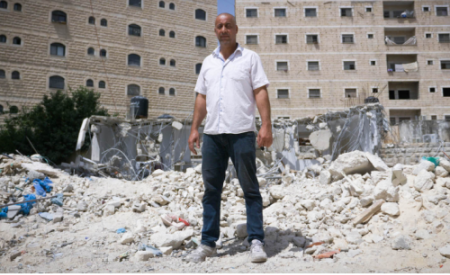 In areas adjacent to East Jerusalem where it’s impossible to get a building permit, +972 Magazine tracked some of the last year’s demolitions of homes lovingly and often legally built under the jurisdiction of the Palestinian Authority because, Israeli officials argue, homes too near the separation barrier “limit operational freedom” and may “shelter terrorists.” They destroyed the house Ihab Hassan Ali built for his family in Shuafat Refugee Camp 30 years ago, long before there was a barrier – he served tea in his garden to barrier workers – and sent him a demolition bill equal to the cost of a home: “You buy from them what they destroyed.” They razed the house Ahmad Abu Diab built in Silwan – he and his family moved to a relative’s living room – but he refused to leave the area: “My grandfather’s grandfather is buried here.” And a phalanx of bulked-up, bellicose soldiers – “Let’s start the break in!” – came with bulldozers to demolish the house Ismayil Abadiya proudly, painstakingly, legally built in Wadi al-Hummus for his five kids: “They came in throwing punches, and tossed us out like garbage.”

Video of the chaotic night shows soldiers breaking down the door, pushing crying kids outside, screaming, “Leave this place!” Asks one older son, “Why are you treating us like criminals?” Says a tearful Ismayil, “To destroy this house, to me, it’s like (an) early death.” For his kids, he worries, “It means I am a zero, nothing. I can’t even protect my home.” “This country,” he goes on. “We don’t know how to live with it. I don’t ask for anything…I just need them to let me live, with my family, in my house. It’s a simple request.” The video ends with a searing image: He stands, then sits with one of his grown sons as bulldozer-laden trucks roar past. Ismayil weeps. His son sits staring, seething, stone-faced, fists clenched, remembering.

Abby Zimet
Abby Zimet has written Common Dream’s Further column since 2008. A longtime, award-winning journalist, she moved to the Maine woods in the early 70s, where she spent a dozen years building a house, hauling water and writing before moving to Portland. Having come of political age during the Vietnam War, she has long been involved in women’s, labor, anti-war, social justice and refugee rights issues.