A Nature-Based Perspective on Peace

This is why, for Indigenous peoples, non-human lifeforms are considered to be our teachers. Walking a path to learn this way requires a courage (wohetike) and respectfulness that gives significance to the self and to all that is other than oneself (wowayuonihan). We have a difficult time because of our anthropocentric (human-centered) worldview – a foundational understanding we have been taught to have about the human-nature-spirit connection. Such a worldview has created unnatural hierarchies, rationalized by misinterpretations of Darwin, who well understood that life on earth was ultimately about “mutual aid.” Unfortunately, educational and cultural hegemony keep us from knowing the truth about why we were able to sustain water sources, air, climate and biodiversity. We also have been taught that pre-colonized cultures were more warlike that post-colonial ones. Yet the scholarship shows that peacefulness was once normal in human groups. A growing body of research has emerged to explain how a nature-based, relatively non-hierarchical worldview is not only responsible for ecological sustainability, but also for the normalcy of peacefulness. It is not a coincidence that 80% of the biodiversity on Earth is on the 20% of landmass still occupied by Indigenous peoples. It comes from a worldview that emphasizes wolokokiciapi through its worldview and the teachings that keep it alive. It is an antidote to war. War is adaptive to an anthropocentric, materialistic worldview, one focused on hierarchy, profit and power that began when we started waging war against Nature. To make peace within ourselves is to make peace with all of Nature, recognizing that we are part of it. From the Indigenous perspective, this begins with establishing a relationship with the energies surrounding the particular environment one finds oneself occupying.

A peaceful worldview sees the Earth as a microcosm of the universe. It sees the human body as a microcosm of the Earth. Contemplative practices and spiritual traditions like yoga or tai chi emerged when Indigenous worldviews became overshadowed by our dominant hierarchal worldview. Practices such as those in various yogic traditions allow one to work toward a mystical participation with the Earth by working on one’s body/mind/ spirit, which is a mirror of the cosmos. Thus, with the intentionality that connects personal body/mind/spirit work with the “Oneness of All” and the deep respect for the gift of life on Earth, we can re-envision our appropriate responsibilities to the land, even when we are not necessarily where we can interrelate with the living soul in Nature, such as near trees or rivers – although, even in big cities, one can usually find other-than or more-than human entities with which to interact.

Imagine if each of us starts with our own commitment to the harmony of our body/mind/spirit, and then connect this to our local place and the community that occupies it, and realize the interconnectedness with all. What would it look like if an organization dedicated to peace on Earth intentionally and fully employed this formula in its work? This may well be a stimulus for a much needed transformation.

[The Standing Rock protest] initiated an awakening of consciousness around the world. Like other Indigenous-led movements to protect land and water around the globe, it revealed the power of wolokolkiciapi and its relationship to prayerful ceremony.
One organization that may be starting to imagine such transformation is Veterans For Peace. Dedicated by its vision to peace on earth, many of its members attended the Standing Rock protest. They learned from the Indigenous people a different way of negotiating the challenges facing our world. Even in the face of dangerous attacks, the Indigenous and the Indigenous-trained water protectors maintained their loving, prayerful and contagious peacefulness within and without. They have always (or mostly) spoken with authentic love to their “brothers” in riot gear, in spite of the police officers’ snarling faces and threatening words. At worst, the protectors lectured the police as being “misguided by the priority of a paycheck.” They told them to their faces and in the throes of military violence that they are not “bad people.” The protectors prayed for the police, even while being pepper-sprayed, or shot at with rubber bullets. I know of more than a dozen police who laid down their shields and weapons and walked away.

Throughout the weeks I spent there, whether on an action or in camp, commentary from the water protectors, Indians and non-Indians alike, reflected a love of the land and the creatures of it, especially of a love of the mighty Missouri River itself, which they were there to protect. The Standing Rock movement is, indeed, one that is full of a love that flows like the river, a love that can flourish when we truly love the flow of the river itself as being part of the flow of our own blood and with the same essence. Many learned from their time at Standing Rock. It initiated an awakening of consciousness around the world. Like other Indigenous-led movements to protect land and water around the globe, it revealed the power of wolokolkiciapi and its relationship to prayerful ceremony. It showed how complementarity and alternative consciousness work together, with love and compassion to seek and take responsibility for what is truthful. Those who have worked with First Nations people at Standing Rock learned a different way of communicating, a way that emphasizes interconnectedness with all, including the many other-than or greater-than human entities. This was beautifully expressed by the words of my friend and a fellow member of Veterans For Peace, Tarak Kauff in an interview at Standing Rock by Dennis Trainor, Jr., the producer of Acronym TV:

“Well, this is the third time I’ve been to Standing Rock. The reason I’m here? I guess there’s multiple reasons. I feel what is going on here is important nationally and internationally. It’s not just about the water. It’s not just about the pipeline. But it is about the sovereignty of the Indian nations. This is really important. As a member of Veterans For Peace, we have a commitment to stop war, all wars. This war against Indigenous Peoples has been going on for 500 years! And it is a genocidal war. And don’t forget that the armed forces participated in the genocide. We are all part of it, that genocide, and we need to make up for it. 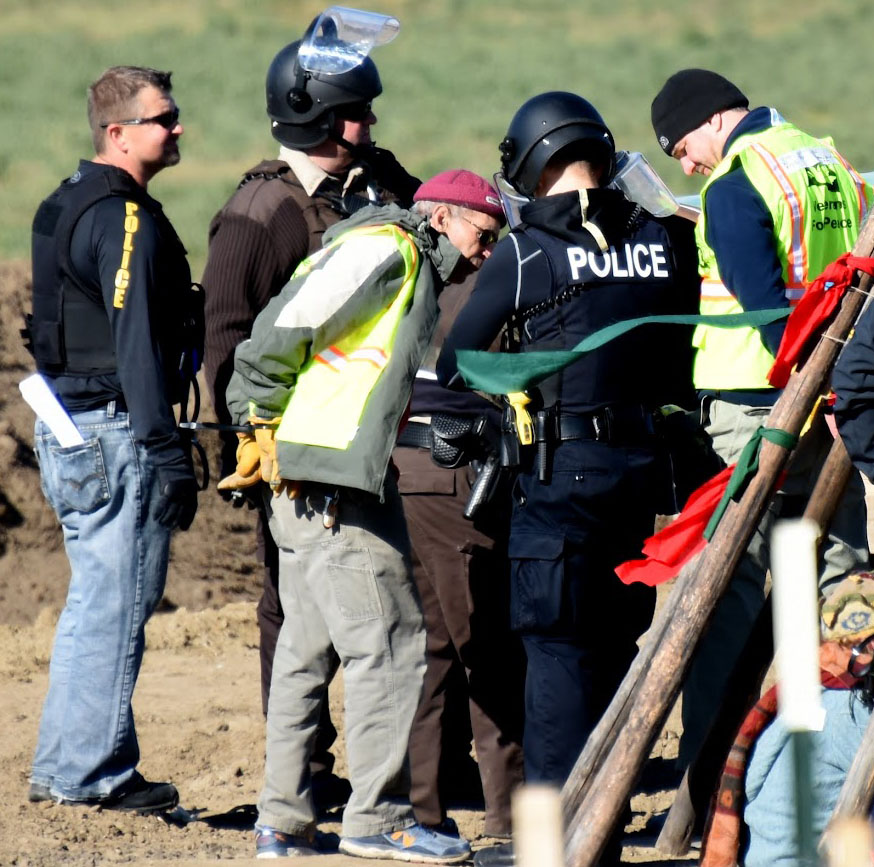 “This pipeline and the disregard for sacred native land and for the water is part of that war. And I saw it as such. This is warfare right here in America. And people are standing up to it. It is a heroic stand of community coming together. It’s a manifestation of community that transcends what happened – what we tried to do in the Occupy Movement. And the reason it transcends other movements is because (thousands of years of) wisdom and the sense of community with all manifest here – a collective consciousness that is absolutely incredible. The first time I came here, I was just amazed that I, as a long-time activist, learned and absorbed from the native leadership here as I have. So I’m here to learn. I’m here to be part of it. I’m here to serve as much as I can as a veteran.

“I also see what’s happening here, this Indigenous-led, this First Nation rising up together, as so important because there are people here in America who are still, and who have always been, in touch with the Earth. The Earth is sacred to them. And we – generally white society, white Western society – have lost that sense of sacredness. If we are going to survive as a human species, we need to redevelop that. We need to reawaken that in our consciousness. And here it’s awake. It’s very, very much awake. They talk about – and to – Mother Earth. They talk about the land, the water. It’s a living thing and we need to get that – they’ve had that for thousands of years. We’re relearning it, but it is in all of us. If we are going to survive as a species, we need to remember. They still do, and we are all starting to get it. So, this is a very important reason we are here, maybe transcending anything else that’s going on.” 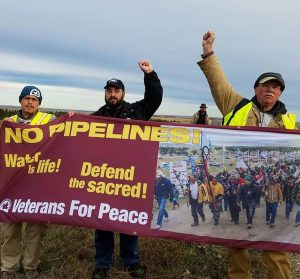 An idea is brewing with one organization for restoring the Indigenous worldview in pursuit of wolokolkiciapi. Veterans For Peace was well represented at Standing Rock. How wonderful it would be if this organization, already dedicated to peace on earth and already believing that the war against Nature is a priority, could be the first non-Indigenous group in the world to truly decolonize and Indigenize!

Four Arrows (Wahinkpe Topa), aka Don Trent Jacobs, is an Oglala Lakota Pipe Carrier and Sun Dancer. He is a made relative and a member of the Medicine Horse Tiospaye. Former director of education at Oglala Lakota College, he is a tenured professor at Northern Arizona University and has been a professor in the School of Leadership Studies at Fielding Graduate University for 20 years. Internationally recognized as an authority on Indigenous worldview, he received a Martin Springer Institute on Holocaust Studies Moral Courage Award for his activism on behalf of Indigenous Peoples. Four Arrows has worked with many remote First Nations cultures who, against all odds, are still managing to hold on to their pre-colonized ways of being in the world. He is the author of 24 books and numerous peer-review papers. His articles, recorded presentations, and interviews can be found online. He co-founded Chapter 108 of Veterans For Peace and has committed his life to helping people manifest inner and outer peacefulness by recognizing and honoring the interconnectedness of all life.