A Failure to Negotiate: How the U.S. Lost Its War in Afghanistan

How is it that the United States lost its war with Afghanistan? This will be debated for years. The question is part of a larger question: How is it that this greatest of all superpowers has not gained clear victory in any major war since 1945? In addition to this general question there are factors that apply only to the Afghanistan war. One peculiarity is how that war began.

In its Oct. 3, 2001, edition, the Chicago Tribune declared, “Afghanistan’s Taliban government again refused to turn over suspected terrorist mastermind Osama bin Laden … .” Most U.S. newspapers were saying the same, and probably most Americans today believe that’s what happened: The United States demanded bin Laden’s extradition, the Taliban refused and would not negotiate, so the United States had every right to invade. That makes a smooth story. But it’s not what happened.

What happened is that Afghanistan’s Taliban government agreed in principle to the detention and extradition of bin Laden, and called for negotiations. But they said that to extradite him they would need to be shown evidence that he was involved in the 9/11 terrorist attack. This offer was reported in many, though not all, news outlets. For example: 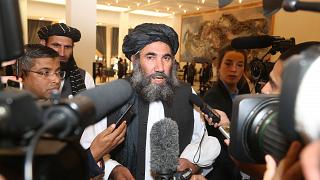 These and similar statements were made repeatedly to news reporters both by Taliban government officials in Kabul and by Afghanistan’s ambassador to Pakistan, Abdul Salam Zaeef. U.S. President George W. Bush’s response was adamant: “There are no negotiations” (Court TV [UK], Oct. 2, 2001). “When I said no negotiations, I meant no negotiations.” “We know he’s guilty” (New York Times, Oct. 14, 2001). Refusing even to attempt negotiating an international dispute is a clear violation of the U.N. Charter Article 33.

Saying “the Taliban refused to hand over bin Laden” definitely rounds out the story. But demanding evidence is not refusing an extradition request. It’s the routine response: step 2 in any extradition procedure. No country will extradite a suspect without seeing evidence, simply on the request of another government. For example, if a country wants extradition of a suspect from the United States, it must send a representative who will, under oath, present the evidence before a judge, after which the judge will hear the suspect’s defense (U.S. Code title 18, section 3184). That’s how it’s done.

In saying “show us the evidence,” Zaeef and the others were in effect committing their government to look at the evidence, and to be persuaded by it if it was persuasive. He was offering to negotiate, and stating his government’s initial negotiating position.

Certainly we may wonder whether they were sincere. This is also not unusual. Diplomats regularly make offers they have little intention of honoring. Insincere, or partly sincere, offers are part of the culture of international diplomacy. Even if insincerely spoken, they have the effect of public promises. They can put real pressure on the ones who spoke them, and can form a basis for criticizing the speaker’s government if they are violated. Zaeed’s request to see the evidence amounted to an offer to launch the Taliban on a diplomatic path significantly different from what they had been following.

What might have happened we will never know; what did happen we know. Whoever seeks to analyze this miserable war must confront these simple facts. The Taliban offered to negotiate, and to detain, try, and/or extradite bin Laden if they were shown the evidence. The United States refused, invaded, had Zaeed arrested and incarcerated in the Guantanamo Bay Prison—and then lost the war in what can only be called a rout.

Doug Lummis was born in 1936 in San Francisco. He attended UC Berkeley on a Navy ROTC contract, and later did three years active duty as an officer in the Marines – the last year in Okinawa. Lummis’ writings–many of which concern Japan’s relationship to the United States–are  critical of US foreign policy. His works include the books Radical Democracy, A New Look at The Chrysanthemum and the Sword and Japan’s Radical Constitution.. He has also published numerous pieces in journals such as The Nation and Japan Focus. Susan Sontag has called Lummis “one of the most thoughtful, honorable, and relevant intellectuals writing about democratic practice anywhere in the world. He is a member of Veterans For Peace and helped found the Okinawa chapter of VFP, of which he is president.