Author: Michael Prysner
Michael Prysner  is an American political activist. He is a U.S. Army veteran who served in Iraq as a corporal. His duties in Iraq included ground surveillance, home raids and the interrogation of prisoners. These experiences led him to take an anti-war stand. He is the co-founder of March Forward!, an organization of active-duty members of the U.S. military and veterans of the Iraq and Afghanistan wars that encourages current active-duty service personnel to resist deployment. Prysner was a member of a panel discussing the topic Winter Soldier: Iraq & Afghanistan in Maryland. He spoke about his time in Iraq as a soldier and his personal views about the two wars. This address became known as the "Our Real Enemies" speech. He is a member of Party for Socialism and Liberation, Veterans For Peace and A.N.S.W.E.R. He is a producer and co-writer for the program The Empire Files, with his wife Abby Martin. Prysner currently hosts the Eyes Left podcast with former U.S. Army Cadet and Afghanistan War veteran Spenser Rapone. 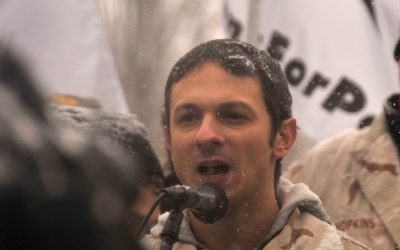 Iraq War veteran demands that George W. Bush apologize for the 1 million or more dead, who are only dead because of his lies and his crimes.